Who Knew? A Visit to Who North America in Camby, Indiana. 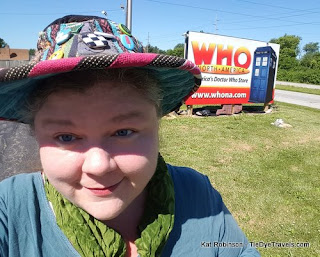 Whether you're a Whovian or a Wholigan, or you just like to dabble in all that's wibbly wobbly, timey-wimey, set your TARDIS to this unique destination in the heart of Indiana.

I have to admit, the pangs of jealousy were almost palpable, even miles away, from my Arkansas friends who are long-term friends of the famous long-running British television program Doctor Who, when I posted this photo to my Instagram.

I'd scanned a list of places Hendricks County, Indiana had to offer shortly after arriving, and while many drew my attention (including Rader's Fabrics, Nomad Yarns, McCloud Nature Park and the Royal Theater), this one spun me around and surprised me. I had to message a few people to make absolutely certain I'd read this right.

Who North America - Brand new to Hendricks County in 2016, Who North America is the only retailor solely dedicated to the hit British television show, Doctor Who, in the world and includes nearly 5,000 square feet of retail and museum space. Additions planned within the next year include a 3-D viewing room, multi-purpose room that will be used for themed parties, workshops and game nights and an arcade room. 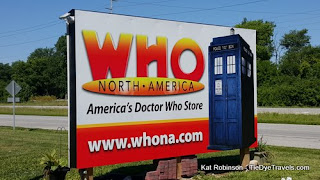 Because of the location of everything else I was covering while in Hendricks County, Who North America ended up being my last stop.  I was heading out of town, ready to get back to Little Rock after 12 days away.  And this great store is on the very edge of Hendricks County.

Turns out, it's a brand new facility, but its operation dates back to 1988. That was the year long-time Doctor Who fan Keith Bradbury began researching UK companies manufacturing Doctor Who products in the hopes of bringing some of those items to America.  Back then, Doctor Who merchandise over here was pretty rare, and it was overshadowed by Star Wars playsets, Star Trek action figures and the like.  Bradbury began with a few items and was overwhelmed by demand, so he brought in more.  The internet came along, and the operation went online.  Who North America quickly grew into one of the largest sources of Doctor Who products in North America, and that's before the new series launched in 2005!  The entire operation moved into a larger warehouse in 2010, and it was there that the mail-order and internet operation was first opened sporadically to the public for events where customers could come peruse the merchandise, play games and meet other fans of the show. 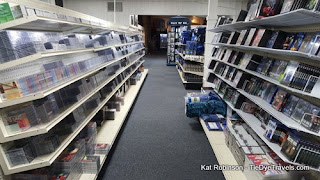 This very year, Who North America moved to this new Camby facility, where it's still under development.  Right now, there's a merchandise floor with a ton of items and a room full of glass cases bearing nostalgic and collectible memorabilia dating back to the early years of the show. There's a museum being developed and a special events area being readied.

The idea behind Who North America is straightforward - this is a business dedicated to making everything Doctor Who available to people here in North America, with reasonable prices and quick shipping times.  But it's developed into something more. Today, Who North America is aiming at becoming a destination for Doctor Who fans who celebrate the show and their fandom. After all, Doctor Who is the longest running science fiction show in the world. 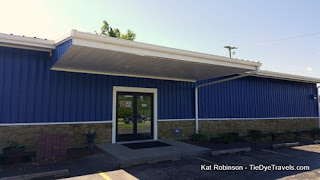 So right at 11 a.m. CST (Indiana doesn't do the whole Daylight Time thing, important to remember when you're planning a trip) on that Tuesday morning I pulled into the lot along State Road 67. I should have known the place would be painted TARDIS blue. 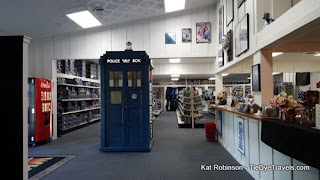 After the obligatory selfie, I entered to find a divided room, at the center of which was a big blue TARDIS. My moment of silence was met with a happy "how may I help you?" from the desk in front of me.  The lovely gentleman there pointed 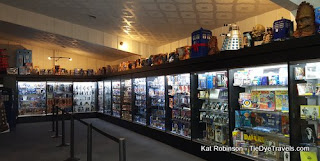 out that merchandise was to the left, historical items were to the right, and a restroom was around the corner. Helpful chap!

As much as the merchandise called to me, I started with the museum portion, a long series of cases filled with collectible items from more than five decades of Doctor Who.  And this is where I stop chattering on so much and just show you these cool things.

There's tons more, including socks and boxers (!), books and magazines and almost every sort of Doctor Who item available anywhere.

Best part is, even if you can't get to Camby, you can order online.  Who North America maintains a particularly marvelous online presence, and since each item's being shipped from Indiana rather than, say, London, it'll get here quicker and with a lower rate for shipping.