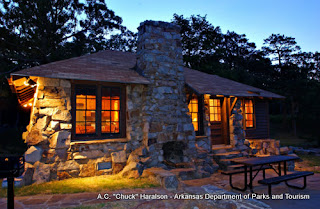 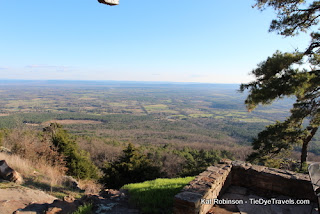 Between the Ozark and Ouachita Mountains lies the Arkansas River Valley, a verdant plain of farmland that sweeps from Fort Smith to Conway and in some places is 40 miles wide. While most of the River Valley is flat or slightly hilly, three peaks along its length have been dubbed the Tri-Peaks – Mount Magazine near Paris, Petit Jean Mountain near Morrilton, and Mount Nebo near Dardanelle. 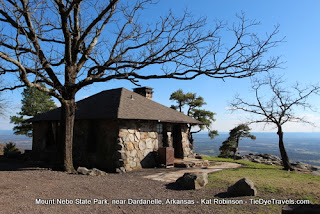 Mount Nebo is the least known of the three.  While the other two bear lodges along their ridges, Mount Nebo sports a selection of cabins, ranging from the original CCC cabins on the outer rim of its flat top to A frames built much later and even brand new duplex cabins.  Its northwestern point is well known as a great spot to watch thunderstorms roll in, while its southeastern point is best known as a takeoff strip for hang gliding. 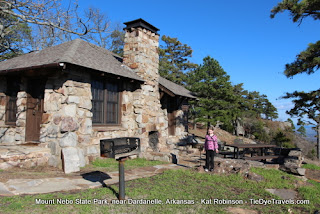 The old CCC cabins are nothing to sneeze at. Though they date back to the 1930s, they have been extensively renovated and are ready to use. My favorite is Cabin 61, which looks out to the south.  It’s a one bedroom unit with a patio and outdoor fireplace just above the Rim Trail. 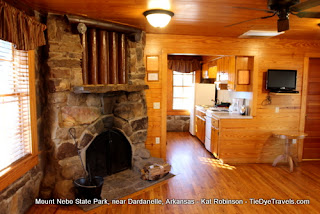 The cabin is well appointed with what you may need for a getaway.  There are no restaurants on top of Mount Nebo, but this cabin and the others contain kitchens with full sized refrigerators, sinks, microwaves and stoves so you can cook what you like.  There’s a futon bed 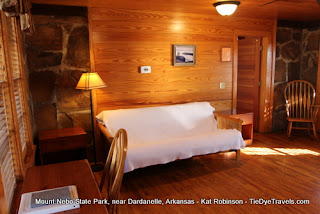 in the living room, so you can have up to four people at a time here.  Hunter likes that because it means she has her own bed!

The bathroom includes a spa tub that’s one of the largest I’ve ever seen for a regular sized bathroom – a real surprise to me! 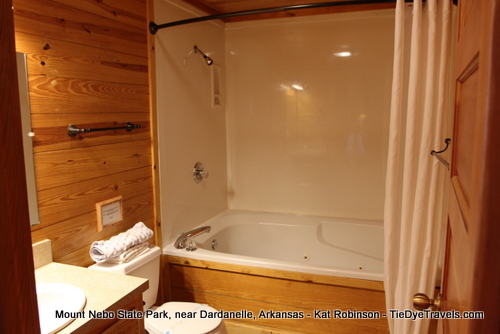 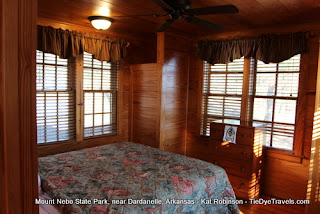 There’s also a stone fireplace inside – and another one on the outside, too.  The park delivers firewood and a firestarter each day, but you can also get more firewood from the Visitors Center.  Don’t forget your matches! 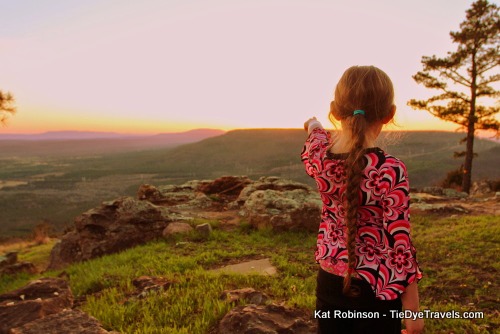 The cabin is comfortable, but the true reason to stay is the view and the wind.  It usually feels 10 to 20 degrees cooler atop Nebo than down in the valley below.  The sunsets are absolutely stunning.

At night, the lights from Danville, Ola and the other communities to the south of the mountain dot the valley floor and look like sequins on satin.

Sunrises are pretty epic too. 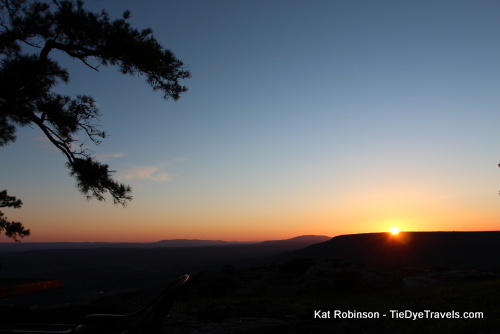 And to make sure you can be clear-headed for that sunrise, there’s coffee right there, a special Arkansas State Park blend from Westrock Coffee! 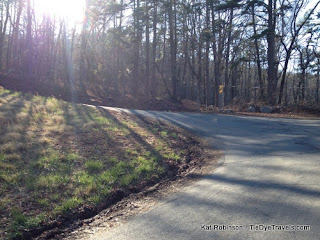 Do be aware, if you have a large vehicle, you may have a hard time getting up the mountain. There's just one way up and down, and it's via a series of switchbacks. The climb is worth it.

Make your plans to visit Mount Nebo State Park now.  For park information, check out the website.
To purchase this article, email Kat Robinson at 7/03/2016 09:03:00 AM