I'll go to great lengths to check out a good recommendation. That's how I ended up making a side trip to Indianapolis, just to try a slice of pie. But I wasn't leaving Ralph's Great Divide without a good meal. Thankfully, this little spot by the interstate was a great dive to enjoy.


My friend Mike Hobbs turned me on to this place. He did so with tales of coconut cream pie, mentioning how a pie fanatic like me should appreciate a good slice. And so I did sit in my car with my computer, wearing strange clothes and sipping on tea, looking at this website for this place right off the interstate in Indianapolis. At the time, I looked longingly at the cool idea of chicken salad (it was over 90 degrees that one afternoon) and resolved to include it in my post-event adventures.

So I found myself following my Google maps directions into the post-lunch fray onto interstates in downtown Indianapolis on a Monday afternoon, hungry and ready to try something new.

This is what I saw through my windshield when I pulled up. 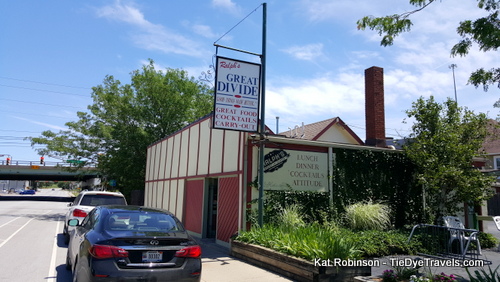 Actually, considering some of the barbecue joints I've reviewed over the years, this was the freaking Taj Mahal. Of course I was in. 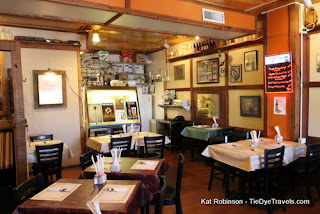 In through the front door I went, into a slightly sunlit room. I was told I could take a seat anywhere, so I wandered along the long bar that defined the internal space and found a two-top in a corner of the back room, where I figured I'd remain unnoticed. 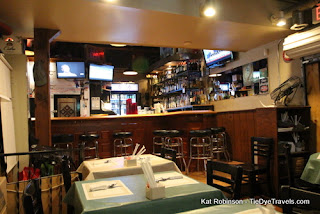 The white and green tableclothed tables were crowded in amidst televisions and sports memorabilia like any good sports bar would be, except unlike the Cowboys and Razorback memorabilia I'd see at home, there were Indianapolis Colts horseshoes overhead and an entire spread of Indy 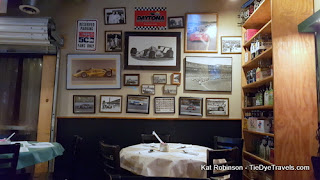 car racing photos and such on the wall opposite me.  There were microbrewed beer packs to take home, and even... an overhead door, for some reason. The architecture was a little strange.

At this point, all I had said when I'd come in was "just me" when I was asked about my incoming party. The lovely lady who came to check on me asked me what sort of beverage I would like, and I responded "unsweet tea?"

She leaned over to me and said "now, our sweet tea here is Yankee sweet, less than half the sweet of Southern sweet."

I just looked up at her and asked "how did you know I was Southern?" 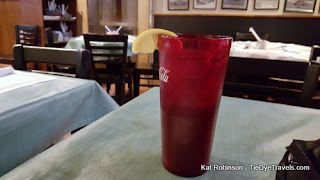 She smiled and I smiled and I nodded for that Yankee sweet tea, which she promptly brought over. I was the only customer in this back room and I'd only seen one other customer in the place.  I was suspecting my usual goal of coasting under the radar wasn't going to hold this time.

I went looking over the menu, and she made suggestions. I had to let her know I was allergic to pork, and she chuckled under her breath and said "well, don't even bother looking at THAT section," referring to a whole slate of sandwiches in a pink box labeled BOURBON SMOKED HAM. She excused herself, and a young man came to take my order.

In that small bit of time, I had found something that had roused my curiosity.  "Does the potato soup have pork in it?"

"You can get it with bacon."

"That's a classic," he said in an unaccented voice I could not duplicate to save my life. "It's our potato soup with a lot of sharp cheddar cheese thrown in and more on top. It's our version of potatoes au gratin."

"I have to have that. And... the prime rib of beef sandwich, Philly style?"

"We roast our own beef here. Good choice."

He whipped my menu away and I was left ignoring the political mess on the TV over the bar. I pulled out my phone and started to send out the Instagrams, which he noticed when he came to check on me.

"You do the Instagrams."

"Well do those Instagrams!" he grinned, and a few moments later he returned with a flairish swoop, delivering a cup of the aforementioned soup to my table with a basket of crackers. 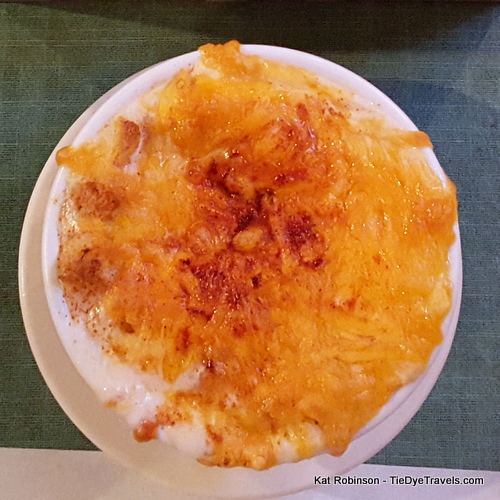 I kid you not, my very first thought was "great googly moogly." 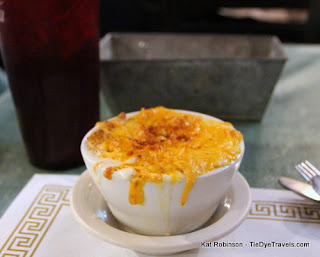 Here was a gorgeously cheese-laden bowl, slightly charred, radiating more warmth than the unseasonably warm June day called for, uttering its delicious scent of salty cheese to my senses. I photographed it as I usually do, and my waiter came back and slid a basket with my sandwich across the table.

"We're masters of the 30 minute lunch," he told me. "A lot of people only get an hour, so we make sure they can get in and out." 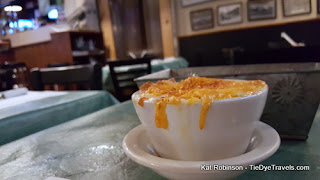 I briefly glanced at the sandwich, but I was still mesmerized by the Hot Pot Aug.  It was calling for me, and I gently broke through the crust of cheese to reveal more cheese-swaddled heat below. I tried my first spoonful. 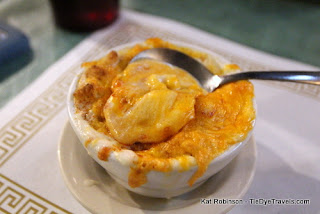 Napalm. Culinary napalm. But man, even though I had just managed to scorch a bit of the roof of my mouth, that flavor was incredible. The potato was still somewhat solid but not raw, enough of a texture that I could slightly crunch into it, and all that salty sharp cheese...

I tried it next on a cracker, hoping for cooler returns. Which I got, but I instantly realized I didn't want to dilute my soup with crackers. The flavor profile wasn't right. 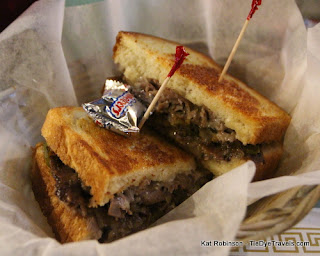 Common sense reared its head, and I set my spoon down and turned my attention to the sandwich in its basket. Incongruously, a small wrapped bite of 3 Musketeers sat atop the split sandwich. Well, beats a mint. 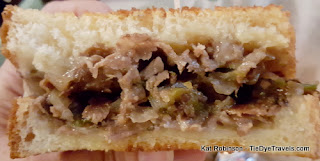 sandwich. This was a lovingly crafted piece of work, an evenly spaced pile of roasted and shaved beef that had been folded together with griddle-chunked pieces of bell pepper and onion and that cheese, carefully layered onto perfectly crisped and buttered slices of sourdough bread. It was the second best thing I'd put in my mouth that day, and the first of which didn't invoke the possibility of mouth injuries.

To say I was happy doesn't quite cover it. I mean, I'd had some pretty good food so far on this trip, but this, this made me ecstatic.

It took a little time to get through the soup and sandwich, thanks to the former's sheer heat, but I savored the consumption while other customers came and went.  Eventually, the nice guy who was waiting on me came back and cleared my table.

"So, you'll be having some coconut cream pie. You're going to want that," he told me. I didn't argue.

That was a wise decision. 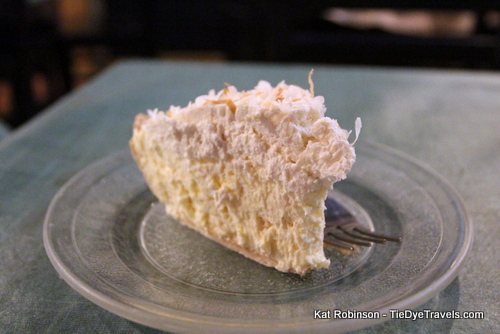 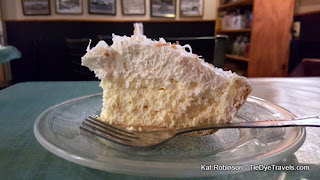 So, yeah, I wrote the book on pie in Arkansas. If I'd encountered this pie in my home state, this one would have had its own entry.Whomever had created this fluffy, cool delicacy had taken to heart the idea of coconut. Sure, the bottom layer was an airy light custard of coconut, but the whipped cream layer above it was infused with more coconut, a creamy promise that stuck with me, and of course shaved coconut was everywhere.  Unlike other coconut cream pies I've encountered, this one was not buttery but had more of a light milk flavor to it, and it did not suffer from that fact.

Speaking of injuries... thank goodness the stomach is an expandable organ, because man, I hurt myself on that pie.

I was asked how I figured out how to come to this place, and mentioned Mike's name, which brought reverence as well as definition for the staff, who'd all come in at some point to see this girl from Little Rock and hear what came outta her mouth.  We got to talking about the SCA and this 50th Year celebration their friend Mike had just run, and I relaxed a bit. I doubt they realized I was there for the pie initially, or that I'd be writing about it. Hey, Indianapolis folks, yeah, that's what I was there for. 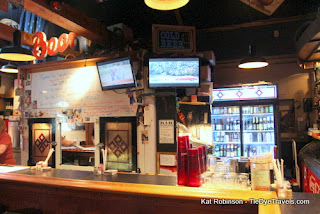 It may also seem a bit strange that when I was done with my meal and able to get back on the road, I drove through the heart of Indianapolis, taking in the views but never leaving my car. I had more stuff to get done in Danville, and frankly, I also needed a nap.  I'd like to come back again and experience more of this pretty city.

I'm just glad I got to experience Ralph's Great Divide. Boy, this place has my number.

If you'd like to check it out, plug the address 743 East New York Street into your GPS and head to Indianapolis.  You can always call (317) 637-2192 if it gets you lost. And be sure to take a gander at the Ralph's Great Divide website.

While you're at it, go look at Mike's site, too.  It's a barrel of laughs AND it has some really excellent recipes I'm going to be... borrowing.