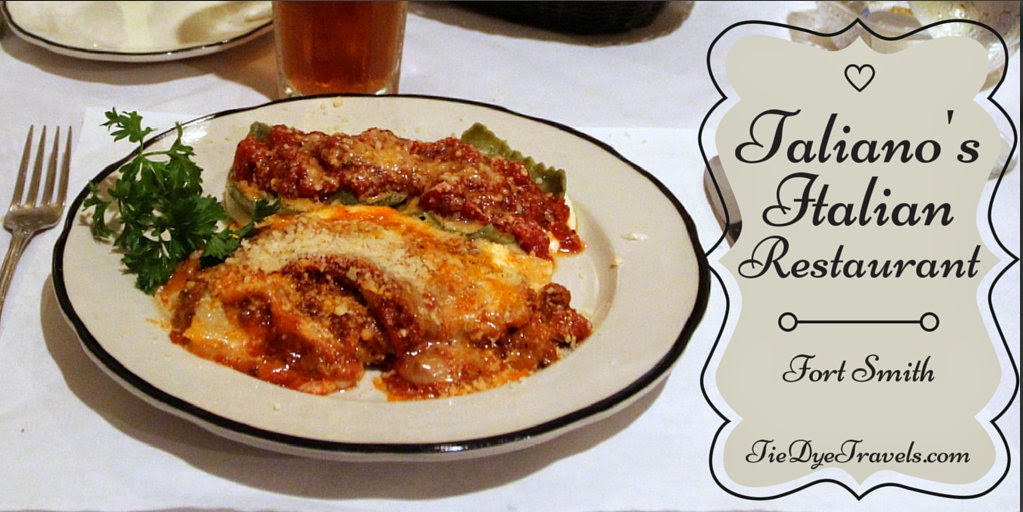 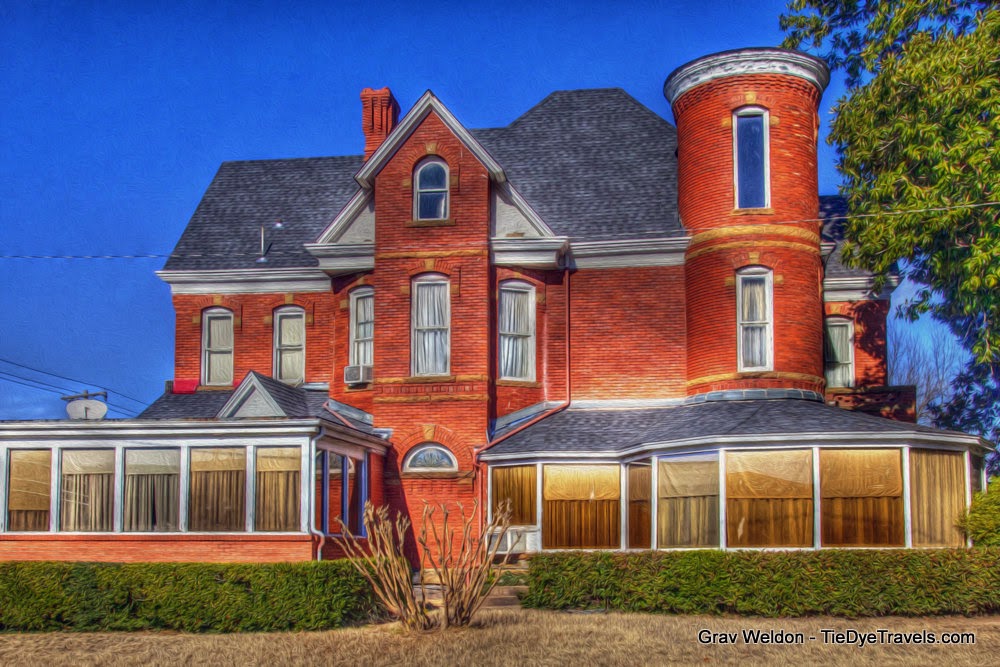 -- took the recipes their mothers taught them and put them to good use within the walls of the home, changing little over the years but the prices.

The mansion has been kept up over the years. Chandeliers have been converted from gas to electric. Fleur de lis carpeting, velvet drapes and candelight make it one of the most romantic places in town. Oh, why have I not experienced the magic? 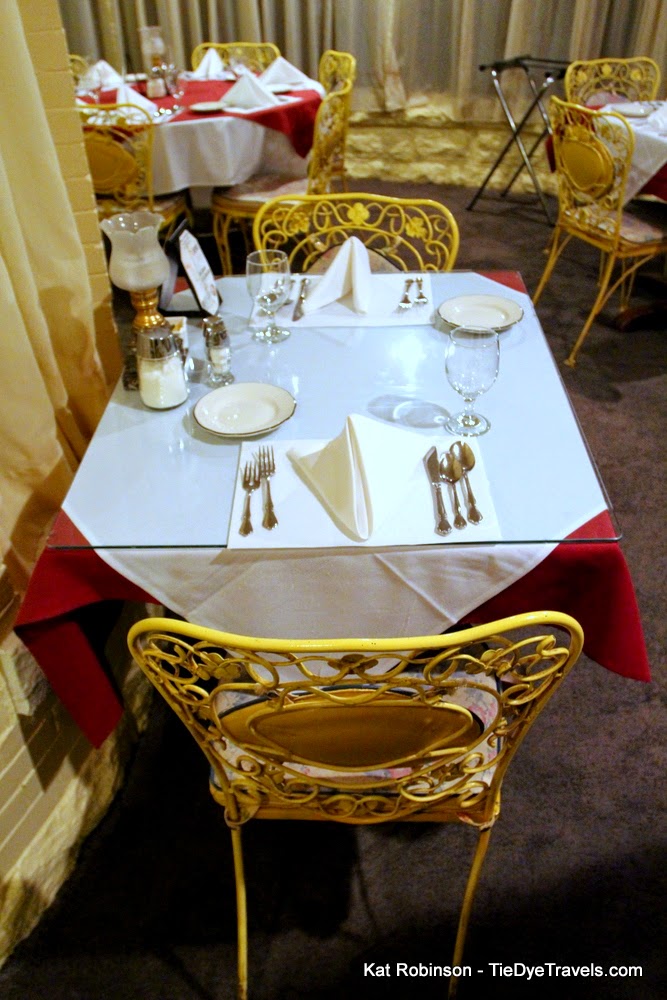 Oh, but I have. I even remember the date of my first visit. It was August 5, 1993, and my boyfriend and I were marking six months. I had the Veal Scallopini. He had the Seafood Diavolo. He had red wine. I had a cappuccino (a novelty to me at the time). I had an accident and spilled said beverage down the front of my shirt. He had a conniption fit. I insisted we stay for tiramisu.

For two young folks to drive up from Russellville for dinner is something else. The incident didn’t mar my love for the place. After all, the sauce was flavorful and fresh, the pasta pliant and marvelous, the cappuccino wet, the tiramisu a moist and caffeinated dream that fueled the drive home since the cappuccino couldn’t.

That was 21 years ago. After all these years, does it still stand up as an outstanding example of fine Italian family cookery? Is it still romantic? Could it be romantic while photographing and taking notes about the food?

We decided to try on a cool September night. We met a rather friendly fluffy gray cat outside, who insisted on attention before we made our entrance. The Talianos folks say the fellow belongs to nearby neighbors but he’s a regular mooch at the door. 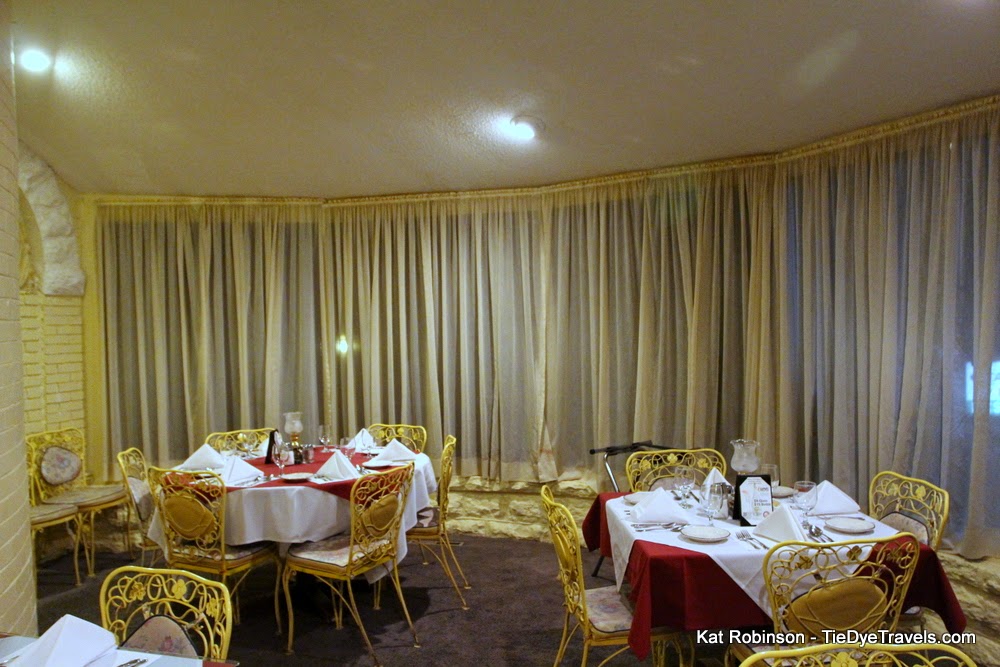 Inside, we were first seated in an interior room where the bar was located, but we found that taking photographs of anything there was going to be problematic – candlelight may be great for romance, but it sucks for taking photos. We explained the issue to our waitress, and she happily 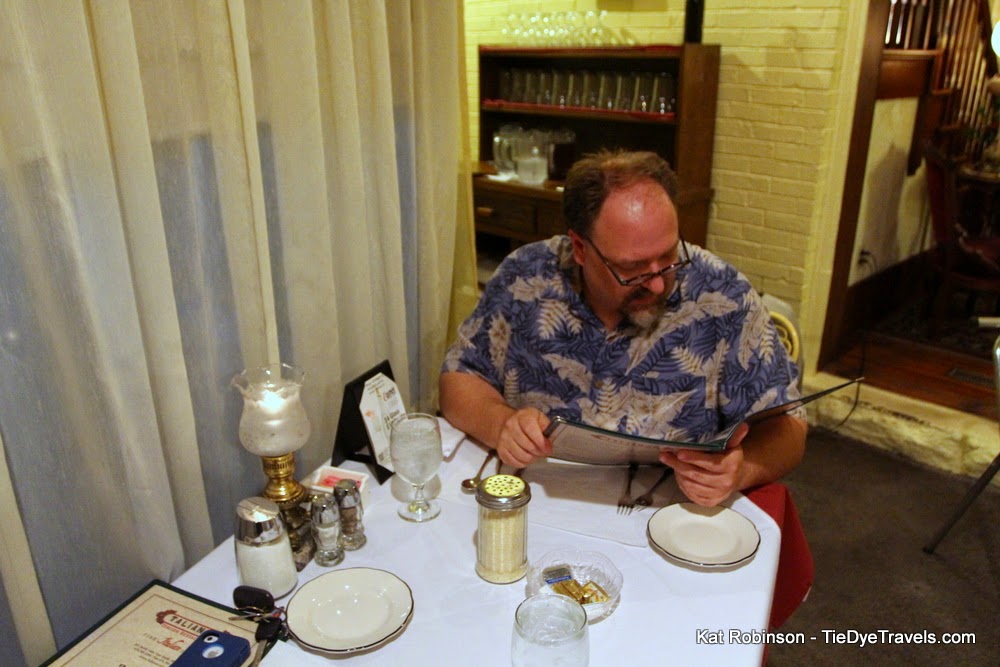 sat us out in the sunroom, where she turned up the lights for our benefit.

We noticed right away that the menu prices have changed since the last time they were updated on the website, but not so much as to scare us off. We decided to start off with the Baked Artichoke 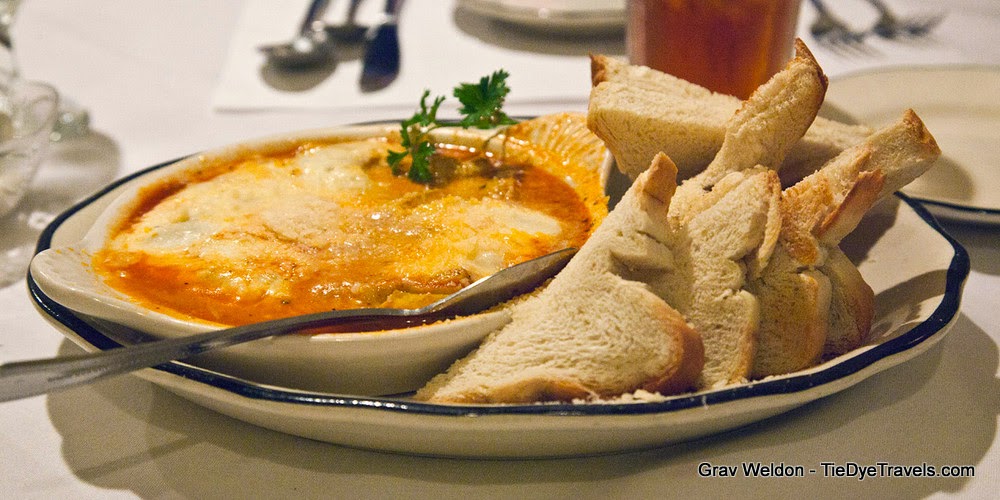 appetizer, which turned out to be a large flat ramekin full of artichoke hearts submersed in marinara and coated in cheese, baked and served with fresh bread. Oh, the bread? It’s cooked and sliced just like the loaves 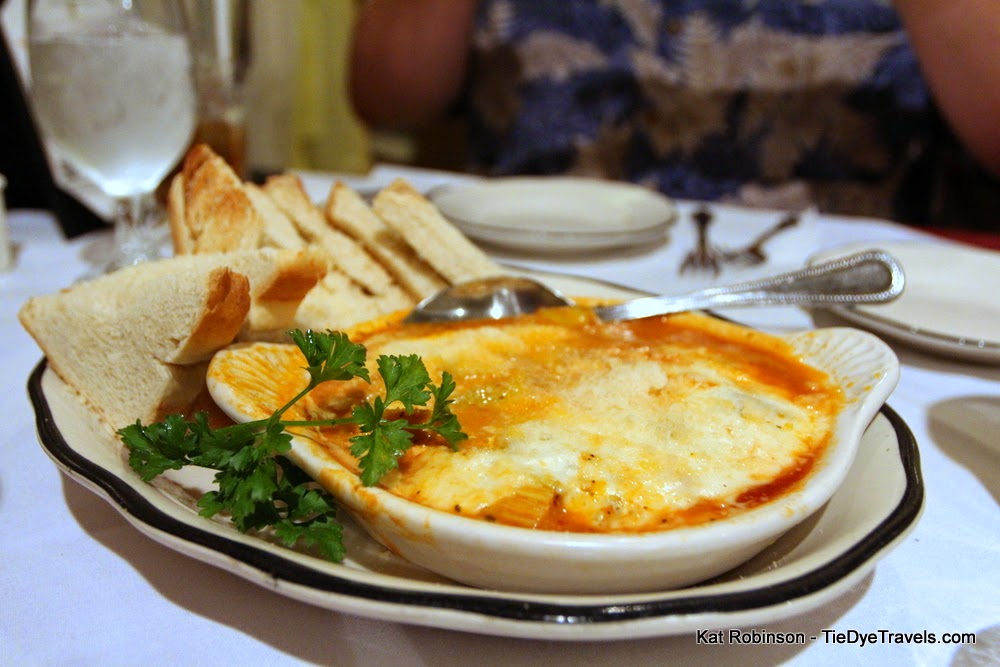 you get at the store, but a lot softer inside. The artichokes were still piquant and the overall flavor was a wee bit sharp but still marvelous.

We took our time about ordering, and finally came to our conclusions and ordered. While we waited, we chatted and our waitress came out and lit our candle. The music periodically soared, an all-Italian soundtrack without much English, with melodies straight out of the 1950s, maybe even out of Roman Holiday. We enjoyed our salads adorned with hefty globules of blue cheese dressing, enjoyed them a lot.

Our orders were eventually delivered, and we did our dance, amusing the waitress as we exchanged places (plates were hot and full of pasta, so that seemed the better idea), shooting at level and overhead the two dishes set before us. 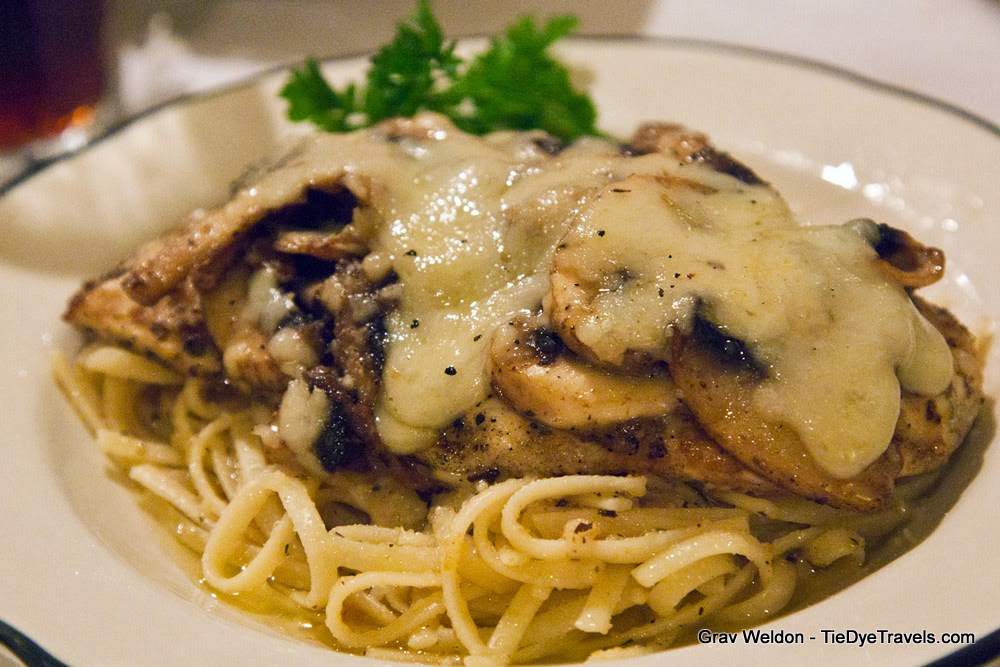 Grav’s Herbed Linguine With Grilled Chicken made me heady with the scent of so many fresh herbs. The pasta, recently cut and a hair off al dente, seemed to soak in the butter and oil herb sauce that also encompassed the chicken. For me, it ticked all the boxes – light enough so you could still 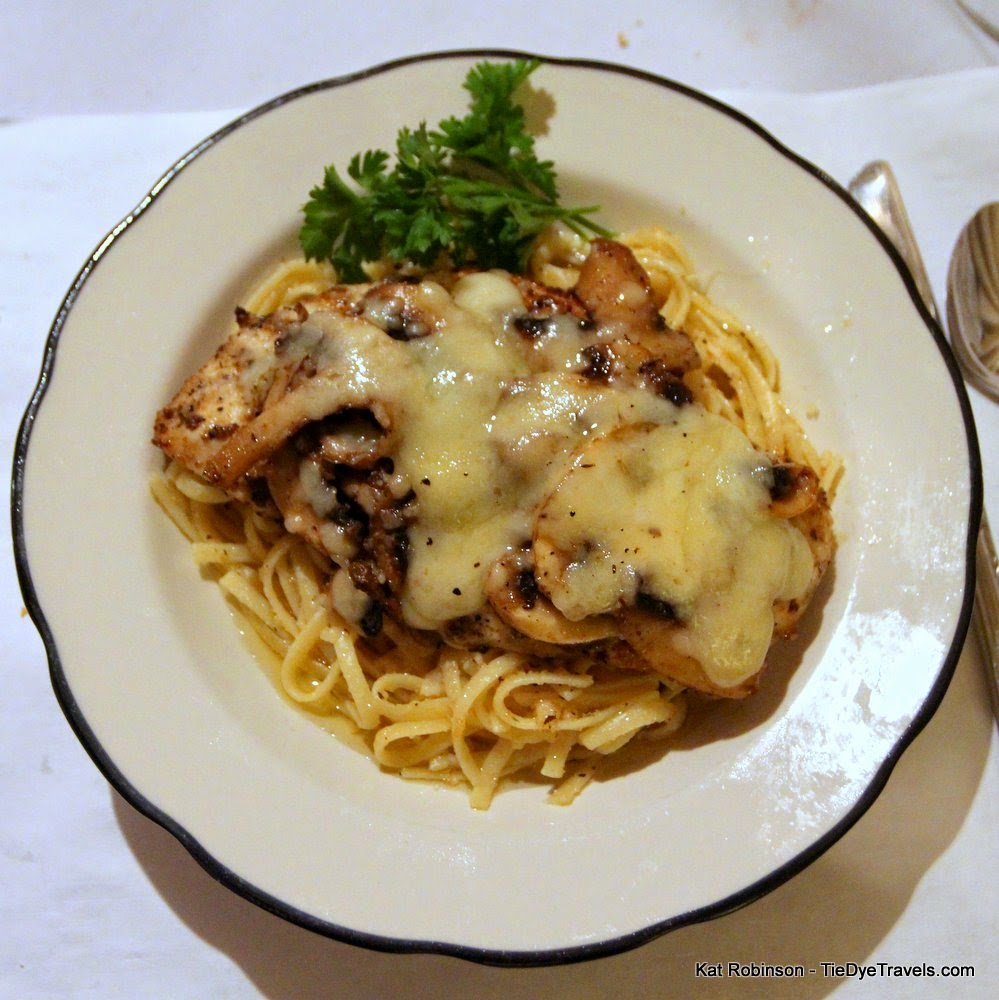 taste the flavor of the pasta and chicken, yet with a strong aroma that made my mouth water. It was crowned with sautéed mushrooms and Swiss cheese and even more herbs. Now, honestly, Grav was a little disappointed, but I think that might have to do with how much salt we prefer. He likes a LOT of salt.

I had gone for a duo of flavors, after I had found that the vegetarian pastas 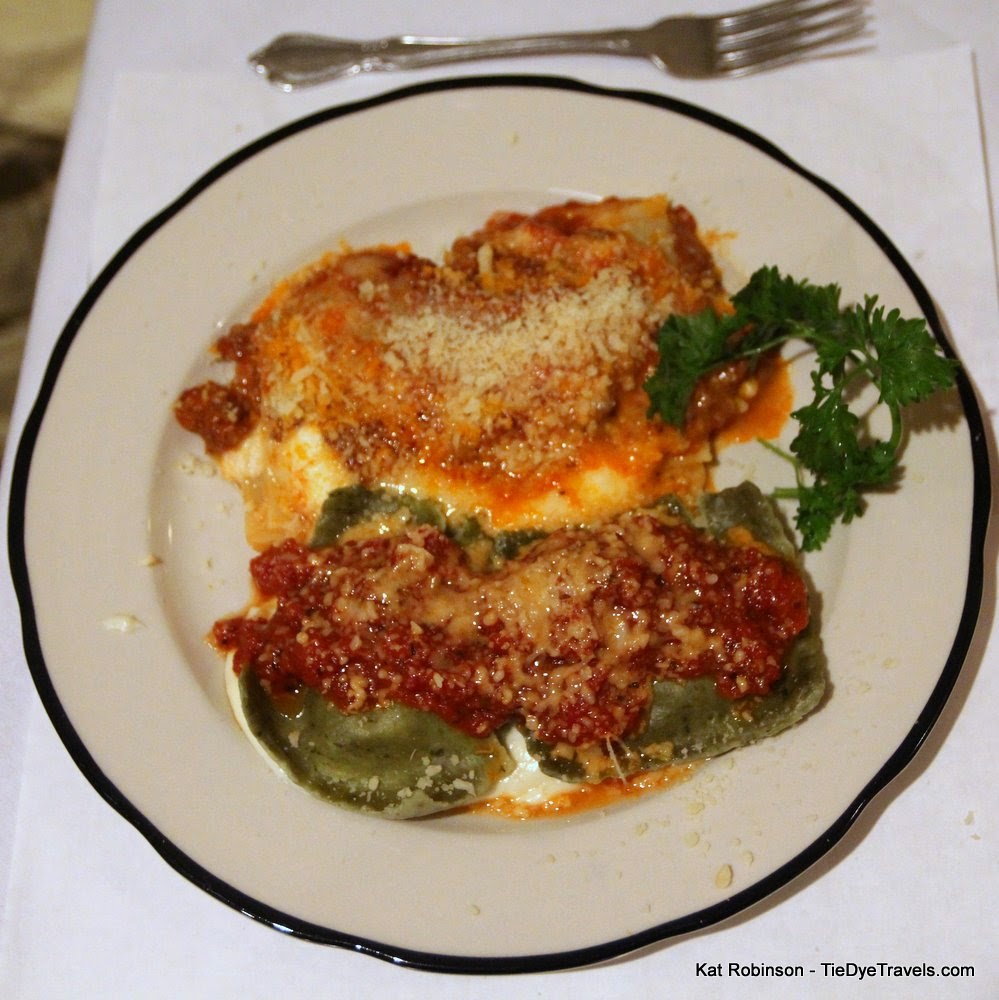 were options to be added to the already more-than-adequate list of dishes to double up. The lasagna slid across the plate a bit, its homemade pasta sheets unglued from the four cheeses adhering it thanks to the plethora of meat sauce between its ample spans. The beef almost overwhelmed the tomato in the sauce, but it lead to a very hearty dish.

The other side of my plate was far more exciting, 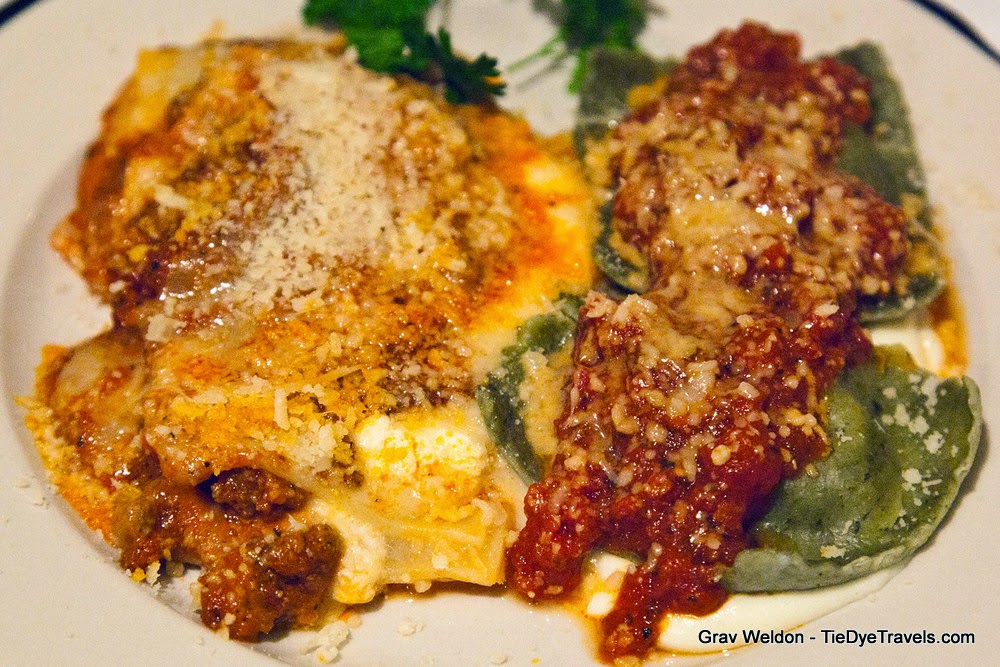 though – three hand-crimped spinach ravioli filled with both spinach and cheese, topped with fresh, chunky marinara atop a bed of Alfredo-type sauce. The play between Alfredo and marinara would have made it interesting enough; the comfortingly substantial ravioli somehow managed 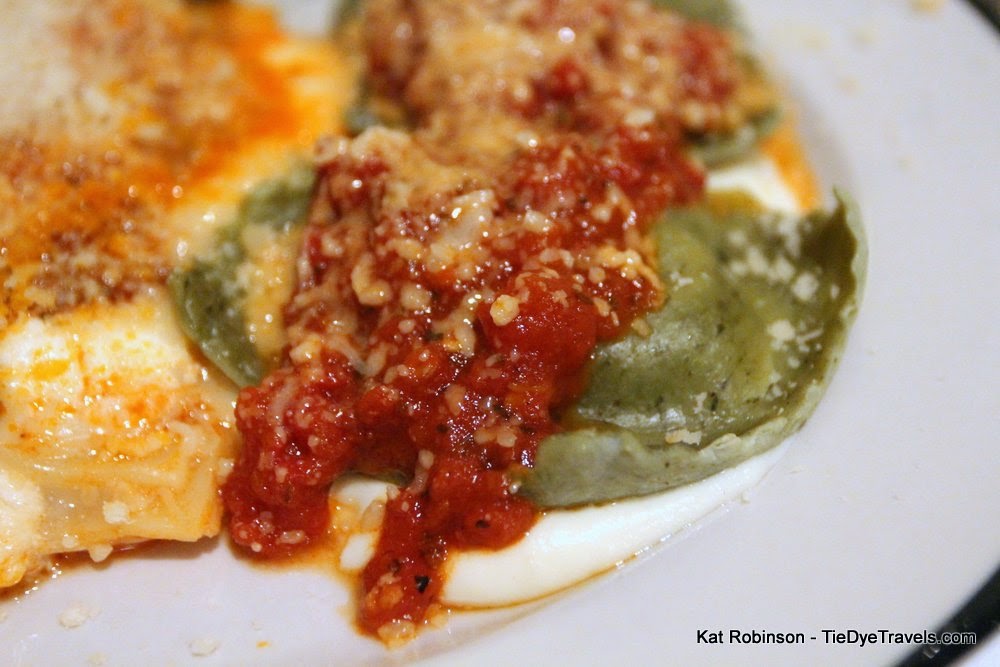 to develop the wonderful fresh flavor of the spinach without the overwhelming flat tones many spinach-sort pastas tend to get. I will get this next time by itself, it’s that good.

Dessert was out of the question. There was no way we were going to be able to consume anything else. And that’s okay. Our hostess mentioned that there are a lot of people who like to come in just for dessert and coffee. We’re going to have to do the same.

And that’s the thing… those ladies, most of the diners there, even Grav himself, have been coming back for decades and generations. See, when the restaurant opened in 1970, there weren’t any other Italian restaurants in town. Today there are a handful. Taliano’s survives because it doesn’t change. The two families still run it – grandchildren now filling their grandparents’ roles. The menu is perfect as is. The house is beautiful. It’s still a popular place for wedding receptions and prom night dinners… and as long as the families stick with it, it’ll remain that way.

If you haven’t been, check it out. If you have, it might be time to head back again. Watch out for the cat. 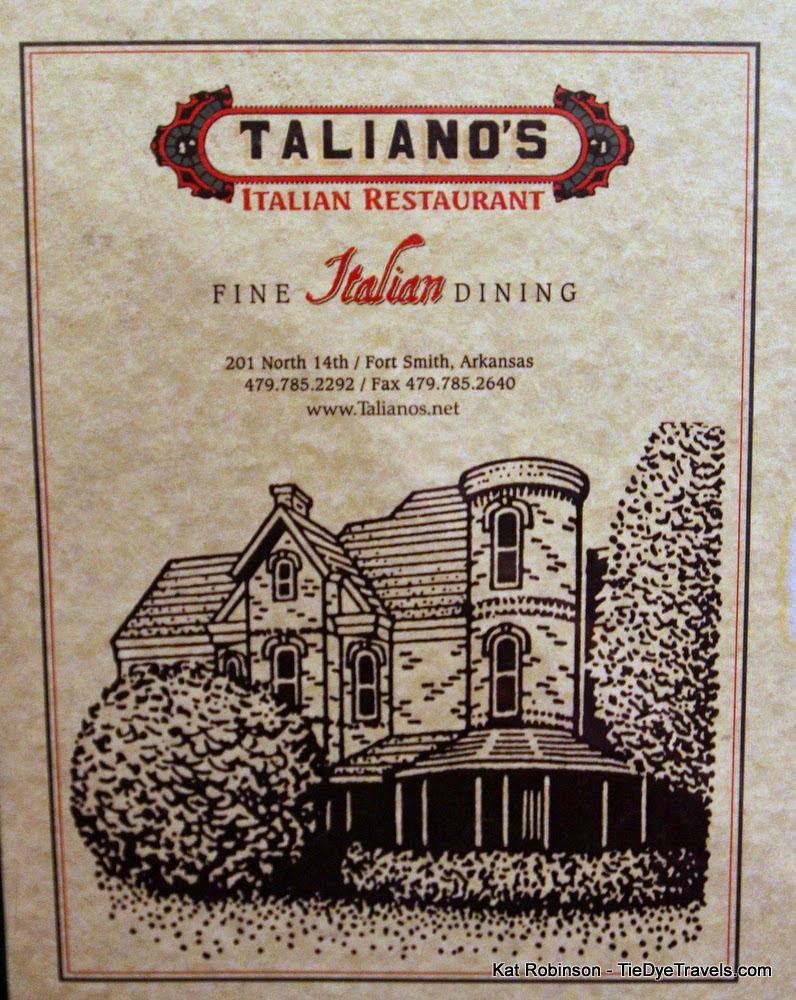 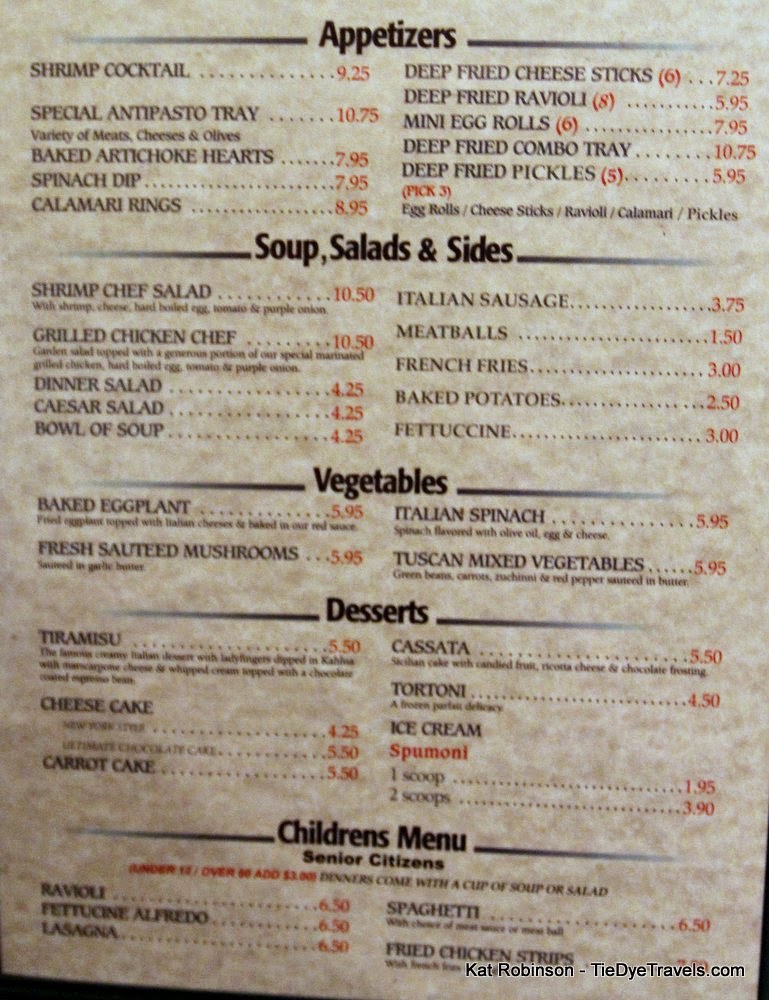 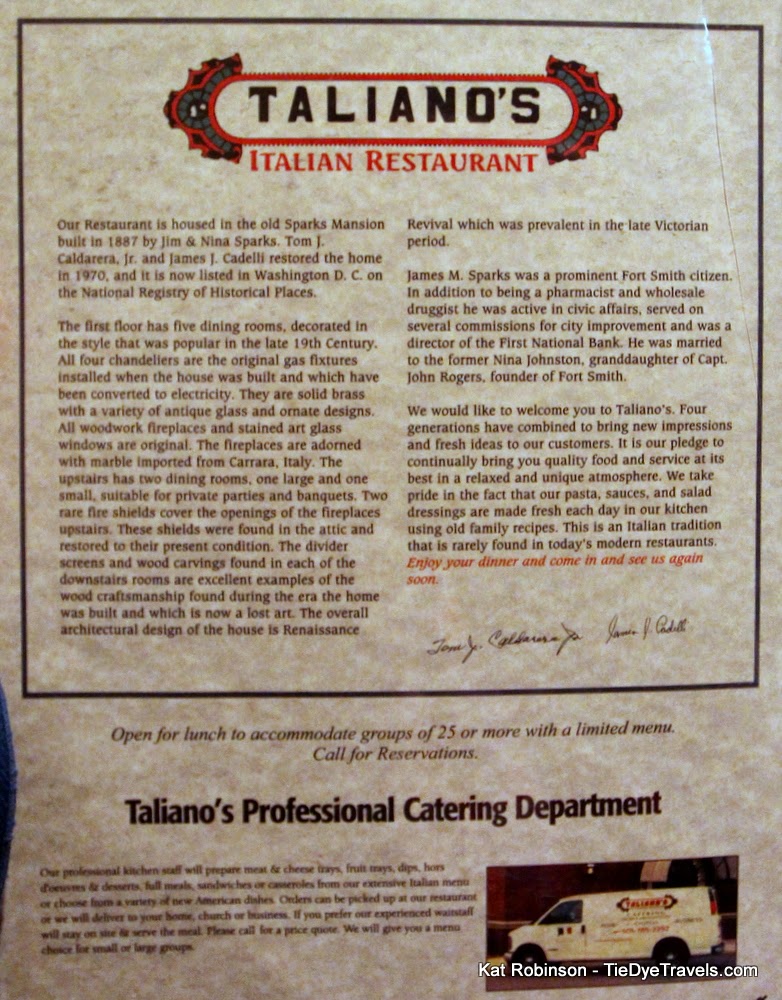