This week's sushi outing took me to another place I haven't been before - Samurai Japanese Steakhouse in west Little Rock.  Mind you, I recall about four years ago when it moved into the same long building as Panda Garden (on the other end) 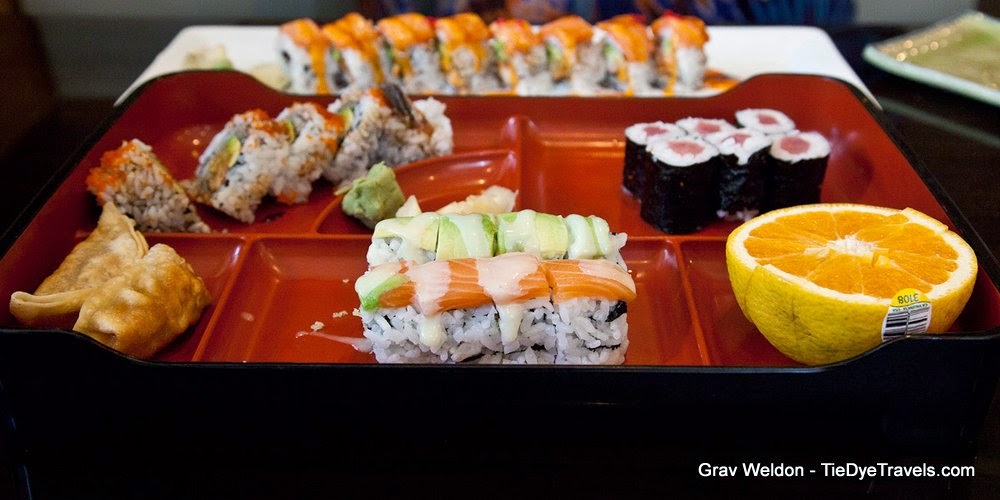 - and I assumed it'd be pricey.  Of course, at that time I wasn't doing as well as I am these days, so anything over the price of Panda Garden's buffet was going to be right out for me. 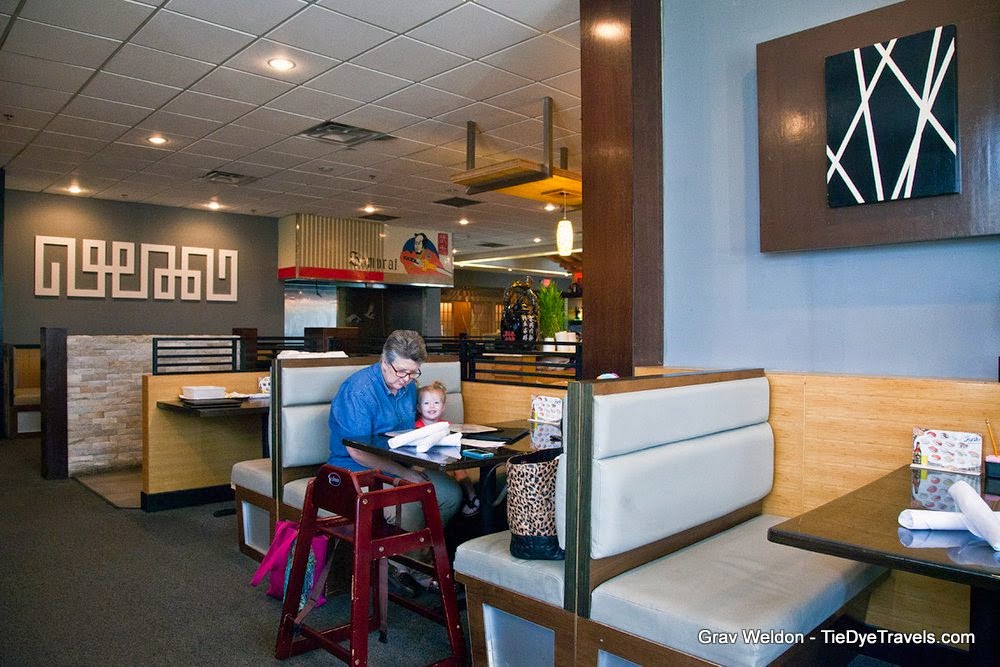 Being a sushi adventure, Grav and I passed up the chance for a hibachi dinner (which, since it was about 1:15 p.m., would have been weird anyway; there weren't any diners we could spot on that side of the restaurant) for a sushi lunch.  We were given menus and sushi sheets and decided to split a Three Roll Bento and one specialty roll.  Being at Samurai Japanese Steakhouse, the Samurai Roll seemed the obvious choice.

Most of the restaurant is dark, thanks to blinds and recessed windows.  We did get a seat at the brightest corner in the space (we were actually asked "sushi or hibachi?" and this was the sushi section, I'm guessing) and relaxed in a booth with a shiny black-topped table.

I'm guessing the folks at Samurai are used to folks sharing.  Our waitress didn't even bat an eye when I placed the whole order, and she somehow knew to split our starters (the soup to Grav, the salad to me). The miso was lightly cloudy and a hint more salty than what we've experienced at other local restaurants, while the ginger dressing on the salad was particularly creamy, but still pleasant. 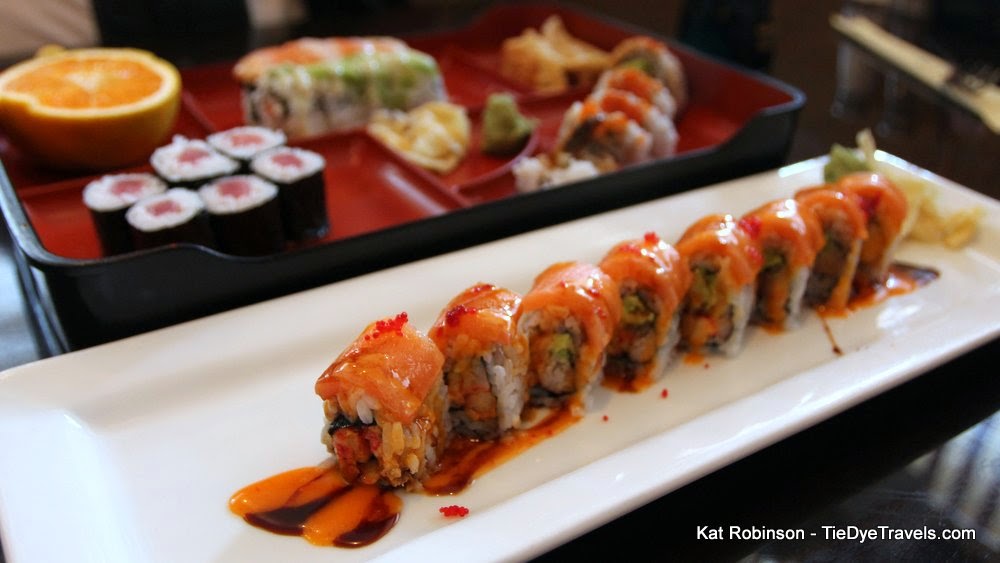 The rest of the order all arrived at once.  The Three Roll Bento is just that -- three rolls of choice from the menu (choices include California, Yellowtail, salmon, shrimp, tuna, avocado, shrimp tempura, crunchy crab, eel, cucumber, spicy 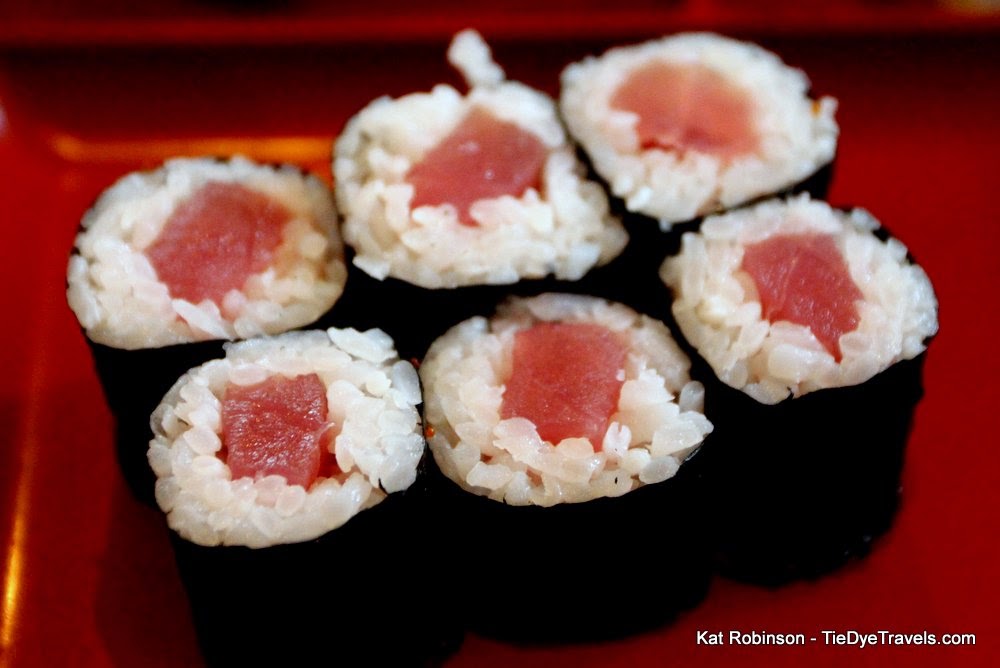 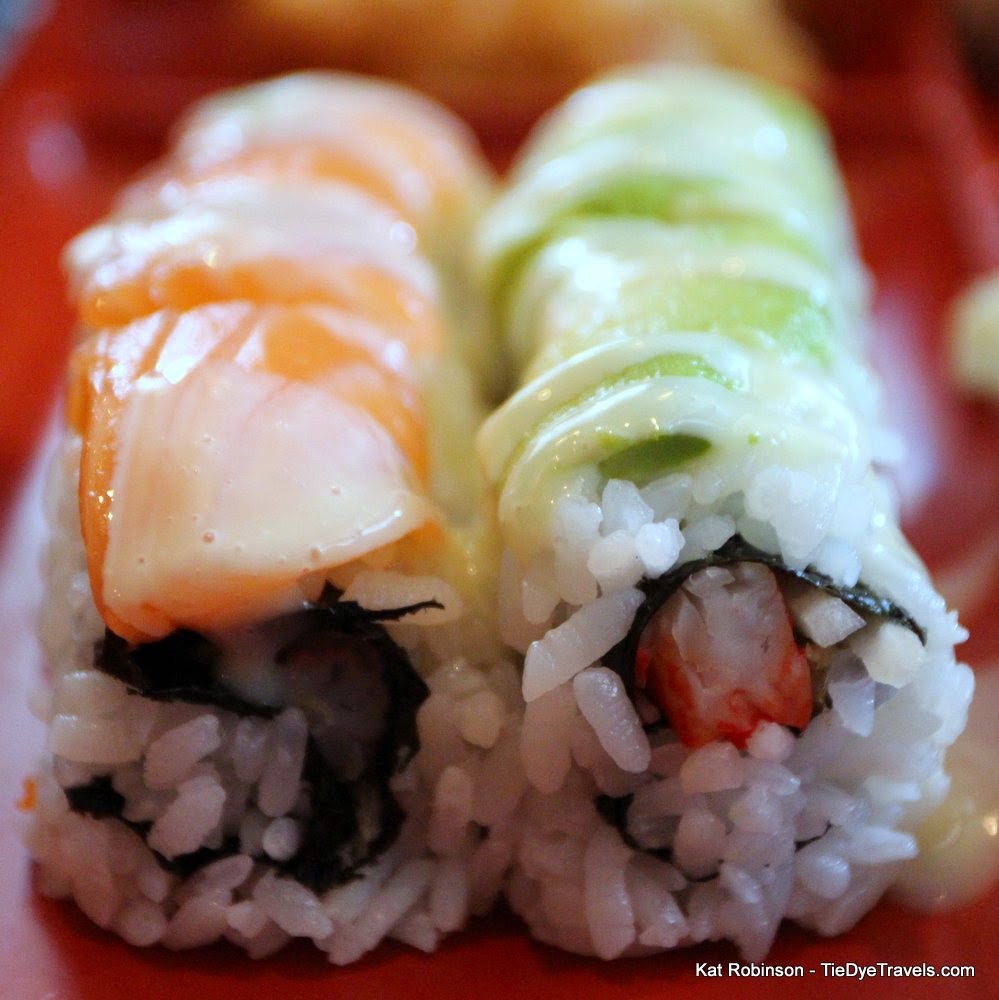 crab, masago and cucumber, split and half covered in salmon, the other half in avocado.  This was a little unusual for us, but we liked having different choices.

The shrimp tempura roll confused us a little.  I was expecting a simple roll with just shrimp tempura within, but what we received also contained avocado, cucumber and eel sauce and was topped with masago.  There's no description for the shrimp tempura on the sushi menu. 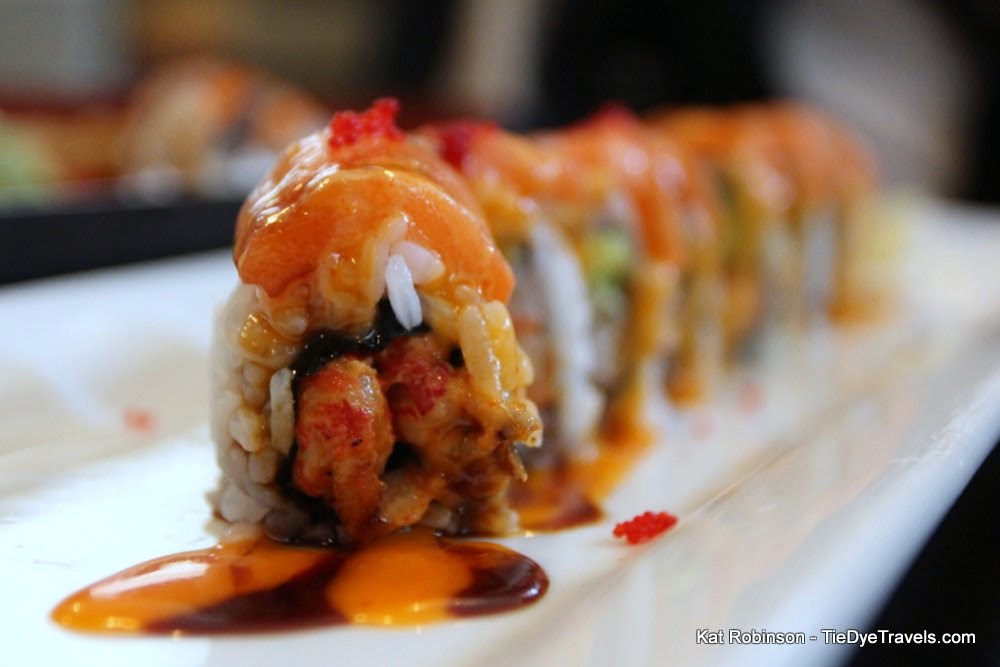 The bento came with two
gyoza (pork dumplings, which Grav seemed to like) and half an orange.

While the bento was acceptable and satisfying, we both preferred the Samurai roll.  The salmon on top was very fresh and nicely cut, balanced well so the pieces were easy 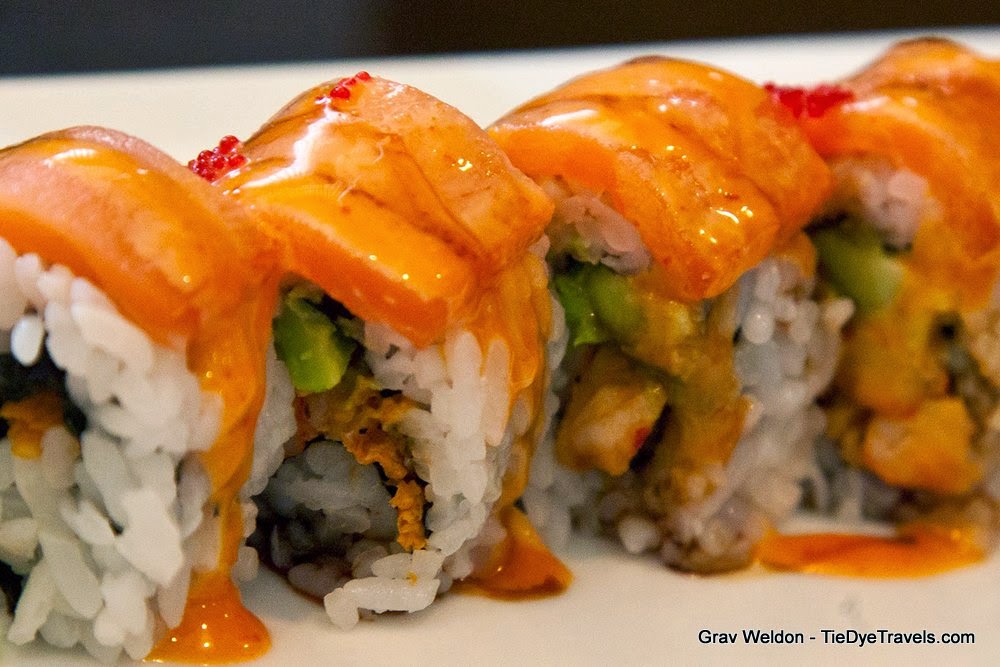 to maneuver with chopsticks (at least for me).  Packed with a lot of spicy crawfish and some crabmeat as well, it was tightly rolled and topped with the aforementioned salmon and more masago, drizzled with two sauces.  One of those was the typical eel sauce, the other something Grav 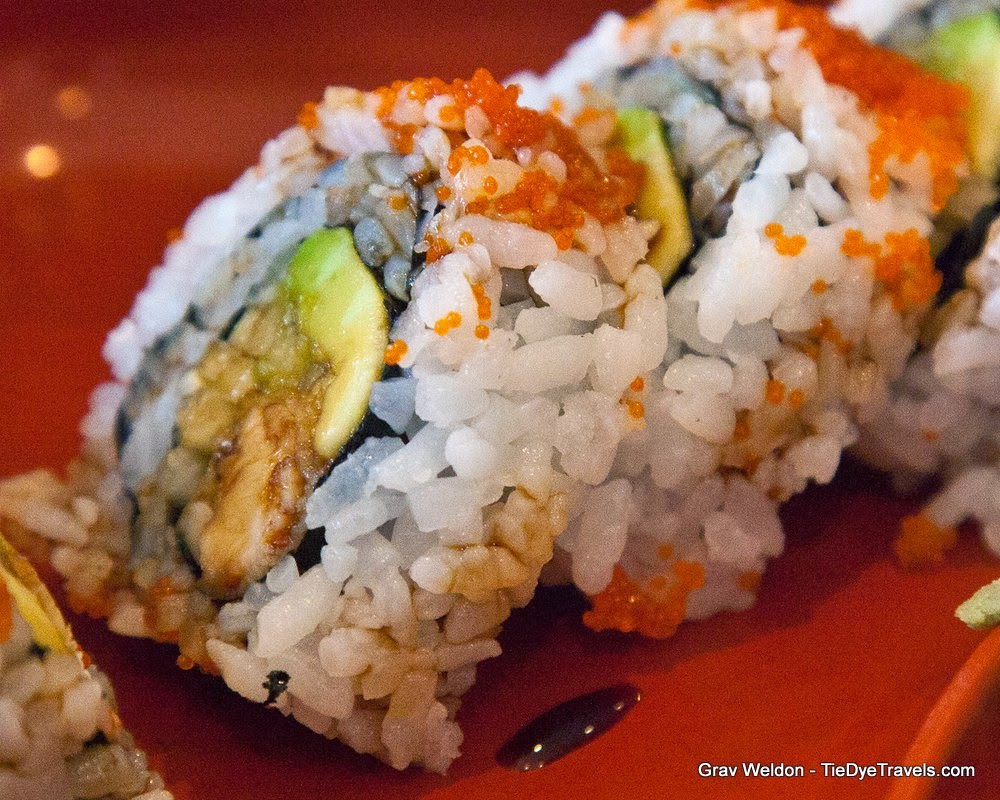 mentioned tasted like "kickin' chicken" sauce.  It had a slight barbecue-ish flavor to me, but it worked on this orange-palette roll.

Samurai Japanese Steakhouse isn't really a standout -- how could it be, with so many other amazing sushi restaurants in town?  But it is steady and the quality is where it should be.  Our lunch came out to $31 before the tip, including our beverages.  Not too bad for a quick lunch. 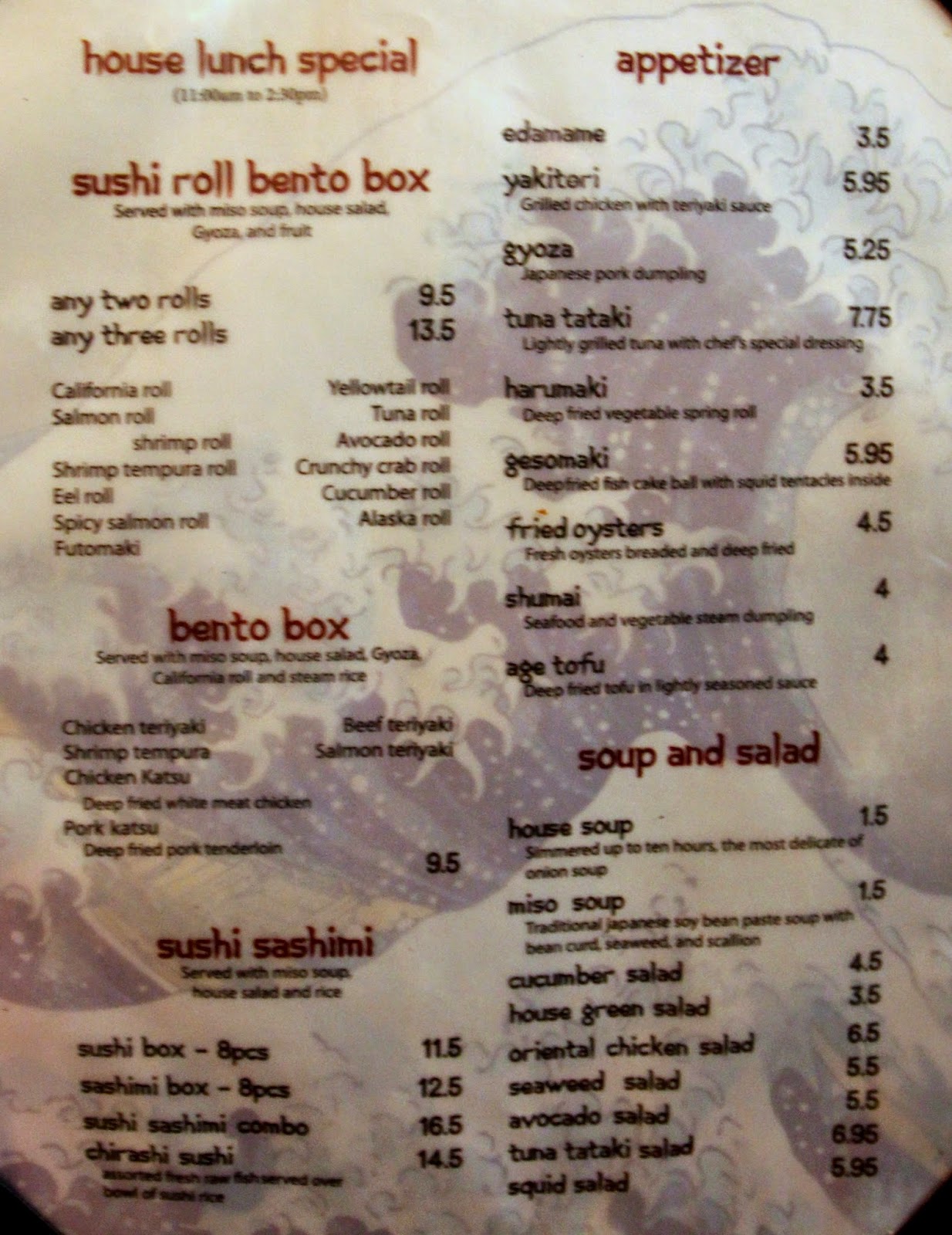 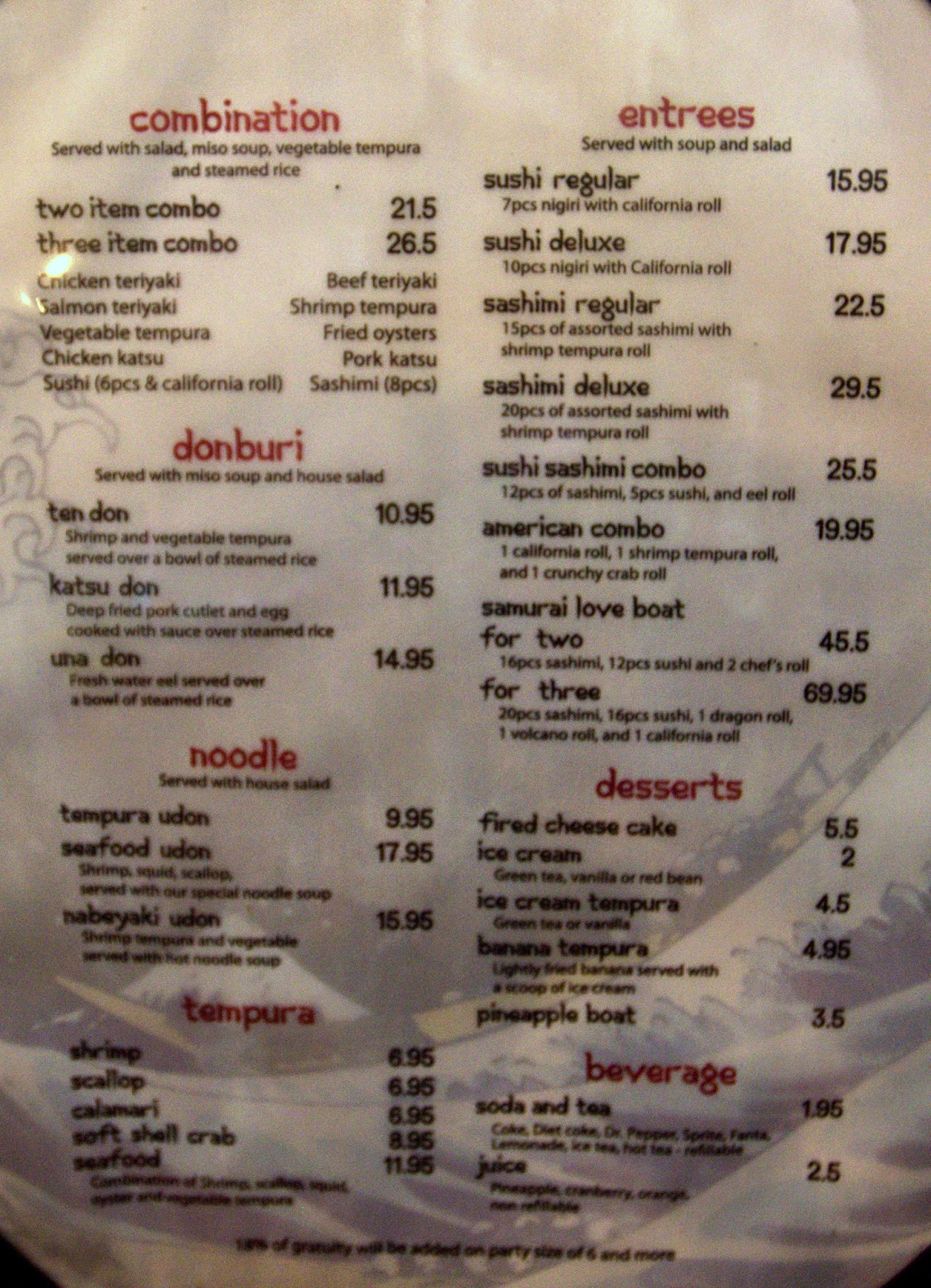