Chicago Dogs in the Ozarks On our search for stories in the area, we stopped at another bait shop for clues.  We turned around and saw, right across Highway 14, an anomaly.  A Chicago restaurant, advertising Chicago dogs, Italian beef sandwiches, Pirogues, just about everything.  There was a big wooden hot dog out front, too.  We had to go back.

We walk through the door on a Friday night and are greeted by a man who can only be described as everything you ever expected an Italian-American Chicagoan to be.  Learned his name was Dino Giannini.  He saw us peering at the five different wipe boards with all sorts of specialties listed on them, handed over a couple of menus and told us to take a load off and take our time. After we ordered we sat and talked with other people who came through the restaurant.  Something seemed a little odd about the place… it was full of people who all seemed to know each other, a real neighborhood joint, sure -- but not your usual sort of neighborhood joint.  They all spoke with that characteristic Midwestern accent.

One of the guys sat down next to us at the big table up front and started talking our ears off -- not that we minded.  He picked up on my photographer’s Chicago experience and compared his own -- having arrived in the area back in 1986 after his parents had moved down.  They, like so many others, had come down for the fishing and ended up moving for good.  The story was starting to sound familiar.

I was curious, especially after encountering other Chicagoans here and there in Bull Shoals, Flippin and Mountain Home.  “So, it’s popular for people from Chicago to come here?” 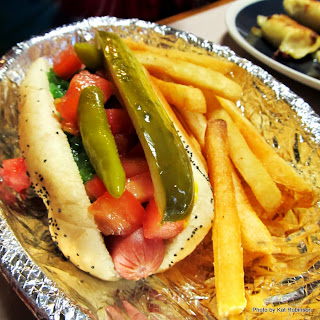 Dino overheard us and broke in.  “About half the people here are from Chicago!”

Our newfound friend at our table argued with that.  “Closer to 80 percent, Dino.”  He looked at me and grimaced.  “Down on Boat Dock Road, there’s all these people.  Back in Chicago they all lived on the same street.  They all picked up and moved down here, right next to one another.”

Our food was delivered, and while my photographer celebrated a Chicago style gyro and dog, I dug into pirogues -- half kraut, half potato and cheese.  I’d never had kraut pirogues before, but Dino talked me into it, and I’m glad he did.  They were delicious with the provided applesauce -- as were the potato and cheese filled dumplings with a little sour cream.  My photographer claimed the tzatziki sauce on his gyro was the best he’d ever had. 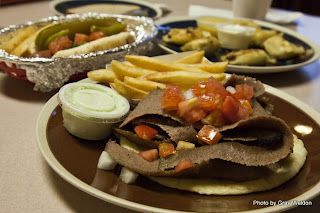 “Thank you, I made it myself,” Dino beamed with that undeniable Chicago style patter.  He had a pride about him, pointing out all his dishes are homemade, not revealing the secrets but making you wonder where he’d come up with everything. 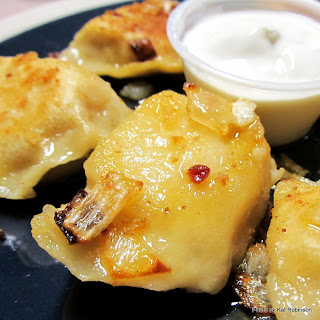 How much did we like the place? I wrote it up for review for the Arkansas Times. Yeah, I'm a stinker. I could have kept the place to myself, but what fun would that have been? Can't wait to see how the business booms.

Best part of Anthonee’s is not the atmosphere or people, though.  It’s the prices.  Absolutely everything on the menu is under $10.  Everything.  The place has been open about a year and a half and is seeing great business.  It’s about a mile from Bull Shoals Dam and I can see it thriving, once word gets out. 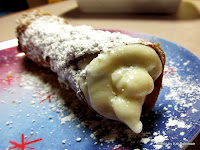