Traveling with a Toddler: Galveston, Day 1. 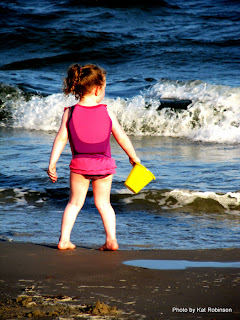 We made it to Galveston early in the afternoon. It was crazy hot, but the wind off the ocean made it bearable.

I went and checked us in at the Moody Gardens Hotel while the hubster and girl child waited in the car. Inside I found an oasis -- and a lot of kids. A LOT of kids. I’ve become so accustomed to traveling and staying at business hotels that seeing kids at a resort hotel is a bit startling at first.

They were everywhere -- waiting with their parents to check in, standing around the neat fountain in the middle of the lobby, passing through in swimsuits on the way to the pool. The staff seemed very happy with the situation. 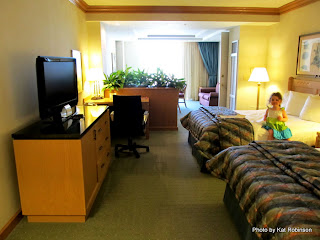 Once we’d checked in, we took our stuff to our room. While the hubster parked the van, Hunter and I explored the room. It was BIG. You can see Hunter enjoying the bed -- she jumped right in when we arrived. The room had two big queen sized beds, a great desk with extra power ports (this is a pet peeve I was glad to see answered!), a large bathroom and a makeup vanity. On the other side of a room divider there was a sitting area with a table, chairs and a couch -- and a balcony overlooking the pool. 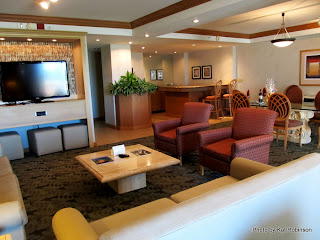 So, I have to ask y’all, have you seen this particular episode of King of the Hill where the Hill family goes to Japan and they think they have the tiniest of hotel rooms until the very end, when it’s revealed they’ve been living in the vestibule of a very large suite? I had that sensation when I walked into the parlor section of our suite… a huge open room with a dining area and glass topped table, a small card-playing area with four chairs, a conversation area with couch and chairs and an entertainment zone with a gigantic 56” TV, two large couches and a couple of chairs. There was a wet bar with ice makers and a fridge and another full sized bathroom. It was overwhelming. I joked with Paul that it was a special birthday present. Oh, did I mention we arrived in Galveston on Paul’s birthday? I should have. 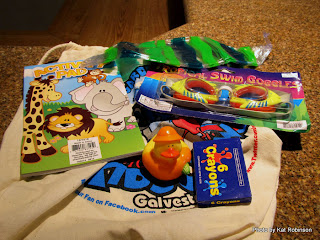 We took a few moments to relax from our roadtrip and to look through the neat little kit Hunter had been given at check-in. It’s available for any kid coming to the Moody Gardens Hotel. It’s a soft fabric bag/backpack that contains an activity book and crayons, an inflatable ball and goggles and a rubber ducky. Hunter was just beaming -- she’s never received that much attention before at a hotel! 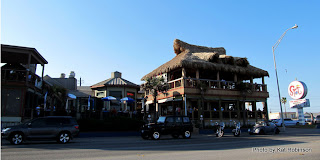 After we took care of a few items and changed clothes, we headed out to The Spot. It’s a very popular joint on The Seawall -- the main road that runs along the southern side of Galveston Island. When we first turned onto the road, Hunter went “ooh! Is that the ocean? I want to go to the seashore!” She was just beaming with excitement. 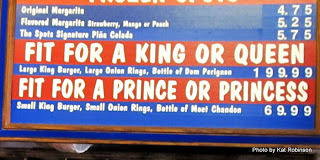 Dinner came first, though. We were taking an early dinner, since we’d just lightly snacked on fruit and crackers most of the day. We split a Hot Combo with wings, fried mushrooms and jalapenos and pickles, crab stuffed jalapenos and bacon wrapped shrimp -- and a Zach Burger. We were amused by the listings for the $199 combo, 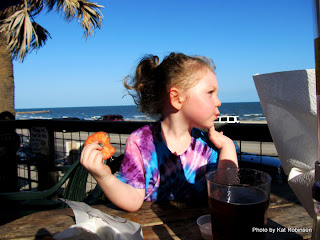 “Fit for a King or Queen,” a burger combo accompanied by a bottle of Dom Perignon.
Hunter chose where we were going to sit -- and even though Paul and I were all about taking advantage of The Spot’s air conditioning she insisted we sit out on the patio, where she could look out at the beach. We took our buzzer and sat out in the wind. Our order came up quick. 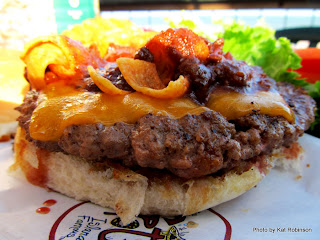 This is what a Zack Burger looks like. It’s a regular burger on a homemade bun, topped with chili, cheese and Fritos. There’s a topping bar inside to add your choice of tomatoes, lettuce, red or white onions, pickles, relish or jalapenos, but we ended up splitting it, neither of us adding a thing. It was a great griddle-cooked low-spice burger that went great with the toppings and on that soft white bun. They also offer wheat buns. 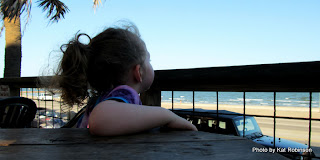 I liked the stuffed jalapeno best off the platter, while Paul dug the bacon wrapped shrimp. We stopped ourselves about halfway through, just satisfied but not too full. Hunter loved dipping the fried pickles in ranch dressing and ate a lot of fries, but what she really got into were the toppings we chose not to put on the burger -- consuming all the tomatoes and lettuce “leaves” we had brought out with us.

But she kept wistfully looking out at the ocean, and we knew it was time. We got in the car and headed down the road.

We first went to Stewart Beach, but balked at the $8 parking fee for what looked to be just the same dang ocean you could find anywhere else. We turned around, headed back and parked just west of Porreto Beach and headed down to the seaside. 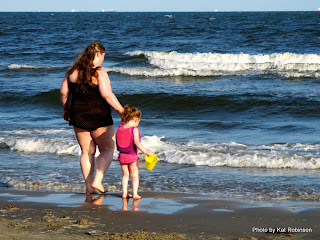 Hunter and I got to share an experience together. I had never actually been in the ocean -- when I went to Gulf Shores last year it was less than two weeks after the oil spill and between that and the crazy weather I didn’t do much more than walk barefoot on the sand. Okay, I waded a little. But I never actually got out in the surf. 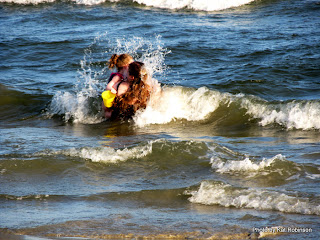 Paul took pictures of us as we went in. Hunter balked a little at the water that kept chasing her feet, but then she let me pick her up. We walked out to where the water was about thigh-high, and I went to my knees. Just at that moment a wave caught us, drenching us both. I stood up and Hunter climbed me like a tree trying to get away. 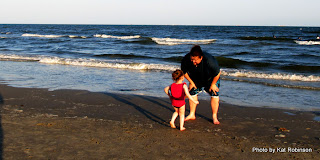 After that Hunter wouldn’t get more than waist-deep in the water, and only with one of us with her. Paul went out quite a ways, probably 100 feet from the beach, but it never got more than chest deep. He came back and collected seashells while I went out myself.

It was a profound sensation, I have to tell you. I’ve been in wave pools, and the waves are different. I’ve been in rivers and streams and creeks and lakes, and there is no comparison. The ocean is just different. 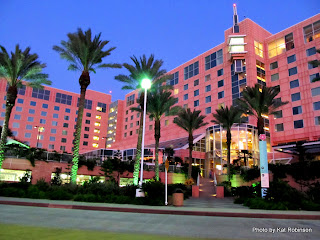 It was nearly 8 p.m. when we got out and headed back to the hotel, sand just about everywhere. On the way to the room Paul and Hunter decided they wanted more water time and headed for the pool. They came up to the room a short time later to retrieve the room key, which was needed to get into the pool area. 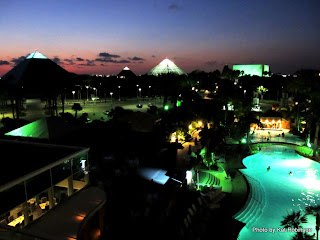 I watched them for a while from the balcony as they swam in the Moody Gardens Hotel pool. It’s a HUGE pool… with an island and a bar and a bridge. There were dozens of people in it, but it wasn’t crowded at all. Paul and Hunter played out there for two hours before they finally came back to the room. 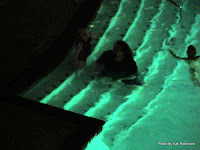 I had work to complete, so I utilized the great desk in the room to spread out computer, notes and camera and got a lot of work done. But I decided work or no work, I’d be in that pool the next day… hopefully not too exhausted from our trip to Moody Gardens. We had a big day planned.

Tomorrow: Moody Gardens and the Rainforest Pyramid
To purchase this article, email Kat Robinson at 8/17/2011 10:55:00 AM