How far would you go for a good slice of pie? How about out in the middle of nowhere, somewhere in the hinterland between Crystal Springs and Mt. Ida, all the way out on a peninsula into Lake Ouachita? Well, I would.

And I did, thanks to a reader’s suggestion that I go check out the pies at the Shangri-La Resort. And I’m glad I did.  But I wasn’t going out all that way without a decent lunch. Nope. I was going to try a burger, too. I mean, after all, maybe they have the best burger in the world.

I have to tell you, it’s sorta like stepping back in time. The Shangri-La was built in the 50s and hasn't been updated since as far as I can tell. The old neon is still in the sign, there’s a classic walk-up desk to check in and the place is wood-paneled everywhere. The cute little cabins overlook one of the calmest spots on the lake, though.

The inside of the restaurant itself is still spick and span but honestly, it’s a time warp, which means I love it. There are short bar stools for counter service and tables and chairs set out across the place to take the best views of the lake into account with large plate glass windows. On the inside wall there are taxidermied fish and of course a grand pie case — which is what we were there for.

There’s a top glass layer that holds slices of apple, peach, cherry and blueberry pies, and below that there’s a refrigerated case for the meringues and the cream pies. From what I understand, the same woman (I’m told her name is Mrs. Carr) comes in every single day and bakes those pies — an average of 30 each day. That’s the sort of thing I’m looking for.

We sat down, looked through our menus and ordered quick food — a cheeseburger with chips for me and a grilled cheese with hash browns for my dining companion. I also asked to sample some cornbread… there’s a reason for this.

Others came in and received the same old fashioned Southern diner-style attention we did. Our drinks were delivered — iced tea for me and Coke in a bottle for my companion. If it had been in a glass bottle we really would have been transported, but I’m not complaining.

It didn’t take long to get our orders. My companion’s grilled cheese sandwich was two slices of American between two slices of buttered, toasted bread and the hash browns were short and fluffy — at $3.80 for the plate it wasn't a bad snack, just not much to talk about.


My burger? Classic Americana. The Cheeseburger ($5.85) came with lettuce, tomato, onion, pickle and mustard — a lot of mustard, actually. I think there was an error. I asked for mayo to be added and the “m” might have been misinterpreted. One bite and my eyes watered a bit.
But that was all right. Our waitress took it back and had the cook replace the bun and re-cheese the whole thing. It was just fine after that. The patty was obviously a salt-and-pepper spiced smashed burger, under a big slice of American cheese with all the fixings. The chips were Ruffles-type.

The cornbread, in case you’re keeping score, was traditional Arkansas-style — white cornmeal with barely any sweetness to it, served up with butter. It was just the right consistency.

Still, what needs to be talked about are the pies. Blueberry is what jumped out at me instantly, and it was just the right way to go, a la mode. That big scoop of premium vanilla was just right for the salty-crusted pie with its sweet filling. The filling itself wasn’t too sweet but there were plenty of blueberries within.

I just wish I hadn’t decided to limit myself to one pie… I had spent most of my trip sampling pies at other places (eight in all) and was almost pie’d-out. I’d already developed a method where I’d go in, order pie, eat two bites (in case one didn’t fully convey the flavor) and put it in a box to go. I couldn’t do that here — it was too damn tasty not to finish — and I nearly licked the plate.

Now, if you want to try some of Mrs. Carr’s fabulous pies, you’re going to have to drive a bit. The Shangri-La Resort is more than 20 miles on the other side of Hot Springs and it’s out on a secluded peninsula. But if you’re truly a pie lover, this place needs to go on your map. The official address (for the folks who are going to use their electronic maps) is 987 Shangri-La Drive in Mt. Ida. I bet if you get lost you can call them at (870) 867-2011 and they’ll lead you straight. The restaurant is open every day throughout the summer but is closed November 15th through February 1st. And yes, there’s a website for the resort. 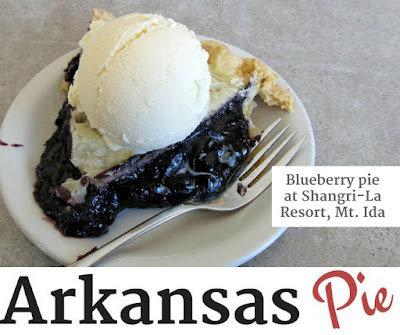