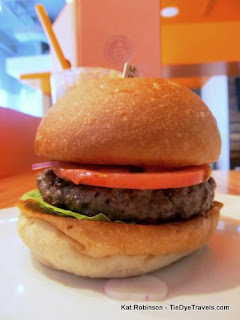 I usually wait a while before visiting a brand new restaurant to pass judgment. Well, as much as I pass judgment. I mean, I like to say I’m a food writer, not a food critic. And I believe that’s for the most part true… but… er, I think I’m getting off the subject here.

I didn’t feel I had to wait all that long before visiting Big Orange, though. I mean, after all, Scott McGehee and John Beachboard have their ducks in a row with Za Za. They know how to run a restaurant.

That being said… okay, I’ll just say it. Wow. 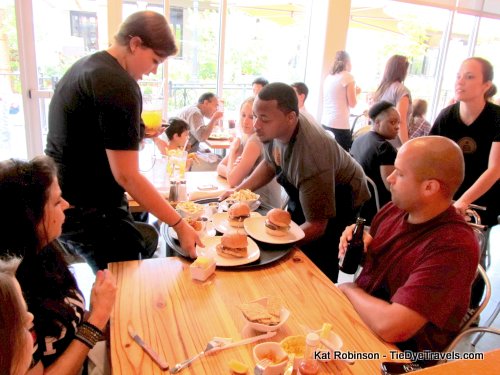 Walked in yesterday at lunch and the place was packed. There was a line at the door. If I’d brought my famdamily as I had originally intended we’d have waited. Being just me, there was enough room to stick me somewhere and let me watch and do my thing.

The place was hopping. After I ordered my Dreamy Creamyscicle float ($4) I just sorta watched for a few minutes. It was loud. People were talking. Babies were smiling. One round tray after another was coming out of the kitchen crowded with burgers on plates, fries in bowls and chips in buckets. There was a very good vibe going on. In fact, I think I heard the Doobie Brothers way in the background.

I knew I’d be ordering more food than I was going to eat there — the hubster’s been getting over a cold and I wanted to take something home to him. He was getting a salad. He didn’t know it at that point but since I knew I needed to try a burger and a salad he was just going to have to deal with that. He should have sucked it up and come with me, quite honestly. Hunter would love this place. 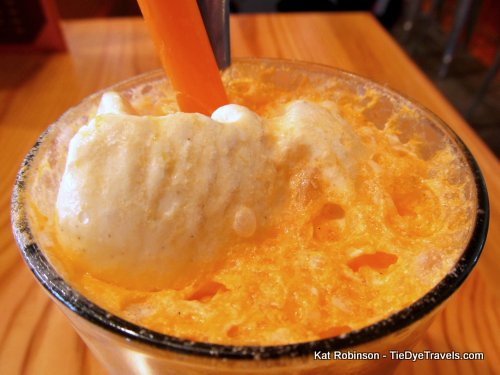 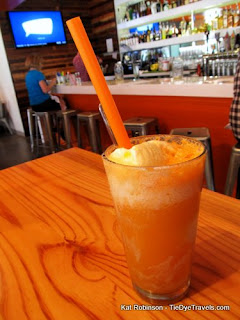 Especially those straws. My Dreamy Creamyscicle float showed up, a big tall glass of orangeness with a big orange straw. They BOTH matched the paint job. I actually asked if the paint had been matched to the float. Turns out, it’s the other way around — but I digress.

I sipped a little on my float while my order was in. The Dreamy Creamyscicle is unlike any Creamscicle-type beverage I’ve had before, and it took me a few minutes to figure it out. The secret? Real orange juice. No joke. Ah, it was so good. 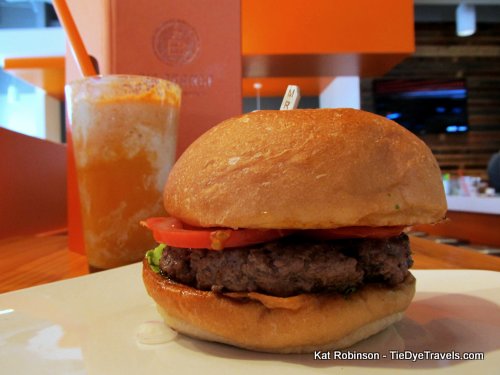 But it wasn’t as good as my burger. I’d ordered a Maytag Blue ($8.50), which had been a hard choice over the Spicy Pimento Cheese ($7.50) but once I saw the line “pepper jelly” in the description it had to be mine.

I have to explain something here. I have a bias against well done burgers. I eat them, sure, but if I have a choice I want them medium rare. I don’t want it to bleed but I do want to feel flesh, know what I mean? Okay. 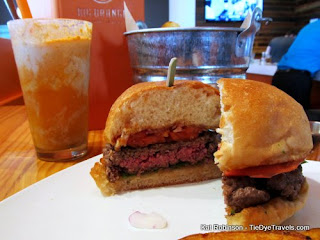 The menu says burgers will be cooked to medium well unless ordered otherwise. Yay. Okay, Big Orange is using fresh-never-frozen Creekstone beef. So of course I order it medium rare. And Big Orange gets the big star — because my burger was PERFECTLY medium rare. No bleeding, warm not hot pink center, nicely crusted burger, char-grilled over gas with barely enough salt and pepper to give it character. The Angus beef just sings “hey, I’m a cow. I’m so tasty!”

And half the audience left at that remark. Oops. Sorry. 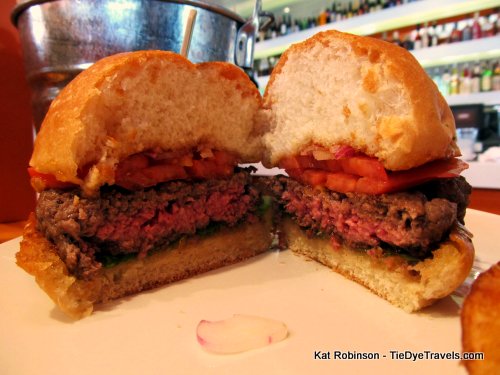 And you know I’ll brag on a good burger patty. But this burger was the real deal, top to bottom. Custom made buttered bun that perfectly fit the patty. Butter leaf lettuce. Micro-thin slices of red onion. Flavorful tomato. I tasted Maytag blue cheese but didn’t really see it (honestly, I ate the damn thing so fast I likely inhaled it). Sweet and spicy pepper jelly with just a hint of cumin. This — this is the sort of burger I would make at home if I had the time and dedication to treat my family right… and didn’t have a job, you know? There’s a lot of work and man hours in that burger.

I cut it in half (I’ve been doing that, taking half home for later or for the hubster so I don’t overeat) but the heck with it — I ate ALL of it. I didn’t even regret that move until I was almost home and the sudden sensation of FULL sunk in. I shouldn’t do that. But I couldn’t help myself. 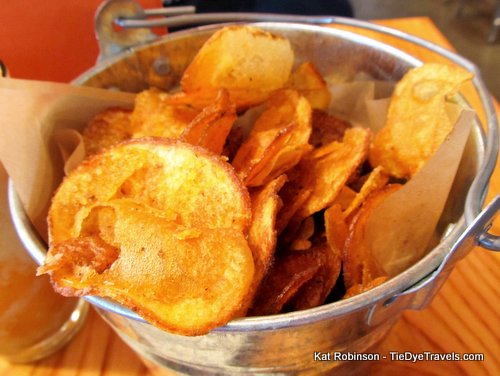 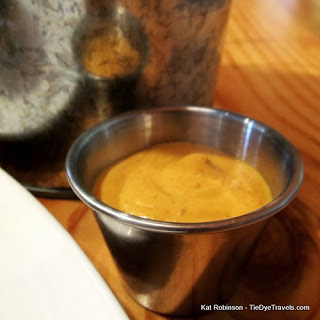 Now, it’d have been bad enough if I’d just had the burger. But no. I had to try the chips. Heck, P. Allen Freakin’ Smith adores the chips (UPDATE: Facebook lnk dead). The waitresses wear shirts advertising them. They’re Kennebec chips made from Kennebec potatoes, fried right on site and sprinkled with a really awesome spice blend and served with a peppered mayo. And the chips and the mayo are both orange. Heck, the burger bun is orange. I had a symphony of orange to shoot — and almost every photo I took was orange. Wasn’t a bad filter.

The chips, though — get them. Share them. I took a ton home with me because there were just too many of them. They’re crisp and thin and sturdy enough to dip or put on your burger — that is, if the burger wasn’t so good you needed to enhance the crunch of… okay, I’m about to go on a tangent again and I shouldn’t. They’re good chips. Get them. 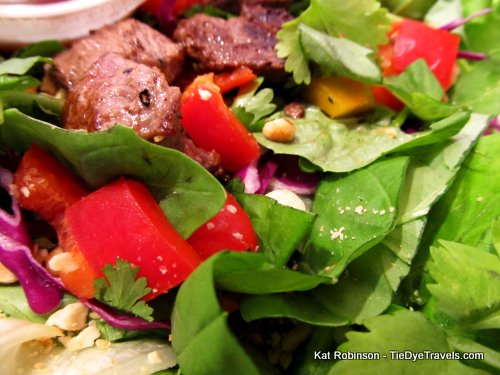 So, as I was saying. I ordered a Thai Chop Salad ($9.50) for the hubster. He was kind enough to offer me the largess of a few bites. The dang salad eats like a dinner. I kid you not. Big chunks of steak along with cilantro, cabbage, red peppers, cherry tomatoes… with this great soy-heavy Thai dressing and some smattering of peanut bits. Hearty. Oh, but there are fresh jalapenos in it, a fact both the hubster and I overlooked until we each had our own pepper-bite encounter. I bet they’d leave them off if you asked.

I had figured the salad would have been more like the Za Za sort of salad, tossed with dressing and bowl-served. Nope. The salads I saw today have their very own character to them. Still fresh, though. 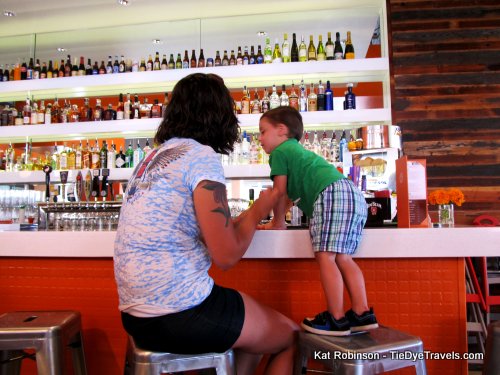 Anyway… yes, I have to go back. I have promised two other people outside the family a visit. You should go. My suggestion, though, is to go either very early (11ish) or a little late (1ish) to lunch so you don’t have to wait in line. Oh, do be aware — there’s an afternoon lull where the place is closed. Don’t go there then.

Want to see what the space looked like before it opened? I had a quick tour.

UPDATE: After six years, I can honestly say Big Orange isn't just here to stay - it deserves to be Arkansas's outward facing burger chain of the 21st century.