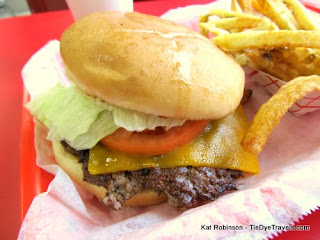 You’d think with such a quiet opening that the new David’s Butcher Boy Burgers at Markham and Bowman here in Little Rock wouldn't be seeing much business yet. You would be wrong.

Despite a lack of a grand media blitz or ad buying spree, David’s opened a few weeks ago and was deemed an instant success; a location to find a great burger in West Little Rock without wading through a thick menu. Indeed, the restaurant is regularly packed to the gills. But does it measure up to its counterparts in other cities?

I’ve been watching the Bubbus family’s restaurants for a bit now; CJ’s has gained a good reputation in Russellville and David’s is doing quite well in Conway. When I saw the big red oval signs going in at the former San Francisco Bread Company, I was thrilled. I mean, there’s this great “burger corridor” that spreads from downtown Little Rock out down Highway 10, but for this area of the city the best you can hope for is a burger and shake over at Purple Cow. 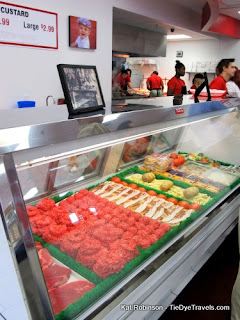 These are serious burgers. Like the other restaurants, the burgers are simple and fresh. The ground chuck is still just fresh ground chuck when you order your burger, freshly ground that day. The fries are still a potato. The vegetables are fresh, the cheese is Cheddar and the bun is lightly toasted. These things are no different from the other two locations. 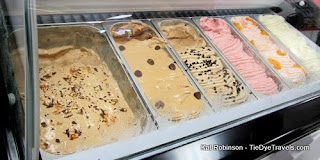 But there are some other fundamental differences. While the Russellville and Conway stores serve up shakes, this location’s dessert offering is fresh-made homemade frozen custard, $1.99 for a regular size and $2.99 for a large. And there are salads on the menu. I’ll tell you about that in a minute.

I went in around 12:30 on a Wednesday afternoon, expecting a crowd but hoping to miss the lunchtime rush. Not a chance. Every spot in the parking lot was taken. I had to wait until someone else pulled out. On entering I noticed every table in the place was occupied. Every single one.

I placed my order and took my number and cup, filled it with my usual iced tea and was lucky enough to catch a booth opening up near the north door. I placed the number card on its stand and waited. 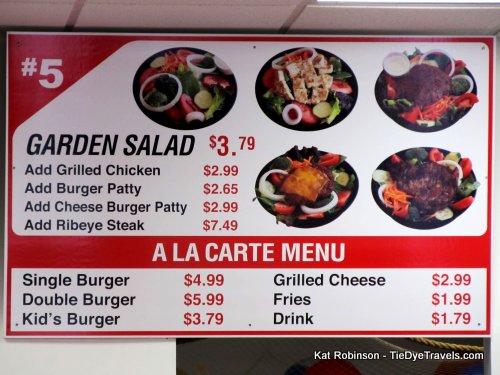 As I waited, I studied the menu on the wall above the drink station and realized the folks at David’s have slipped something in on us. The salads, well, I understood the addition — and thought it was funny and interesting that you could have a burger patty or a cheeseburger patty added on top of what appeared to be a pile of hamburger toppings.

And then I looked closer. One of the toppings for the $3.79 salad is… a $7.49 steak. I kid you not. Wowza. So really, you can tell someone you had a salad for lunch instead of the steak dinner you just ingested. Not sure if the ribeye and salad is worth $11.28, but I suppose I’ll have to try it and make sure it’s a good deal. I think it would be — if they threw in an order of fries. We’ll see… later. 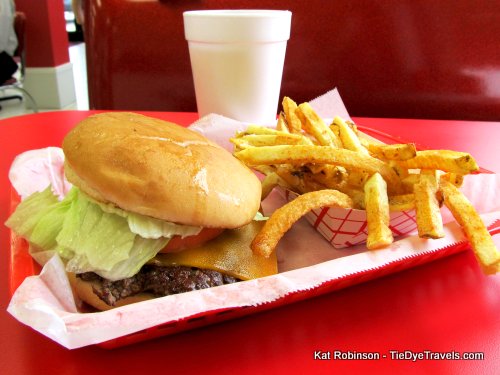 But the burger. It was delivered to the table with my order of fries, the culmination of my combination (the Single Burger Combo is $7.68; cheese is 35 cents more). It was delivered on wax paper in a red plastic basket with a boat of those fresh fried French fries without ceremony, just brought to the table. The number was collected and I was left alone with my consumables. 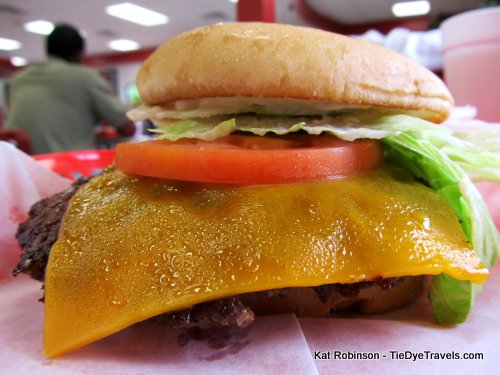 I noticed right away one thing. This burger was greasier than the Conway store’s burger. Hands down. Like it had just been tossed on the bun without draining. It also smelled a little different. Took me a moment to figure out, but then I realized — while the spicing on the Conway burger and this burger were from the same sort of spice blend, this one had far less of the spice on it.

But that worked for me. I think the Conway burger has too much spice, anyway. 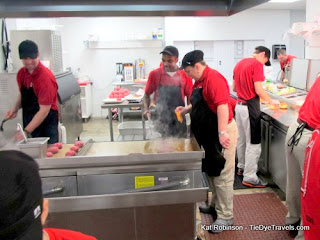 The toasted burger was almost sweating, gleaming from its exposure to the grease-laden air of the kitchen. The lettuce was iceberg, the pickles were ridged hamburger dills, the tomato was deep red and the flat slice of Cheddar cheese gleamed from its perspiration. The patty had a very nice griddle char to it. The bottom bun didn’t appear to be toasted like the top one.

And the flavor. It was good. I’d rate it ahead of the Conway version and behind the Russellville version, actually. It dripped. It oozed grease. It had such a strong griddle flavor I was taken aback — no griddle that new should have such a flavor to it, a testament to all the folks who have dragged themselves over to West Little Rock these past few weeks and likely overloaded the darn thing. The spice had hints of thyme, sage, black pepper and salt to it.

It was enough to leave a huge grease mark on the wax paper, even before I completed half the burger… which in itself was a feat, considering it’s a big hunk of meat there. 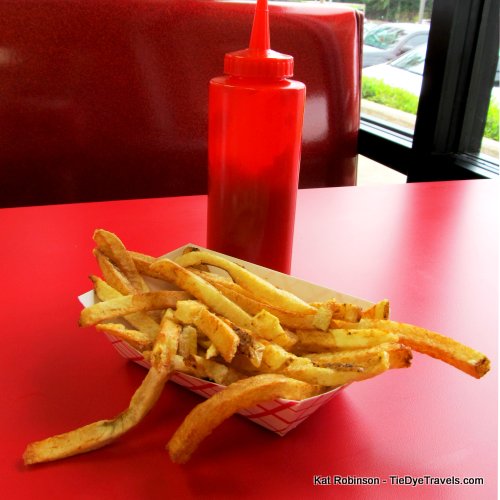 The fries were also light on the spice in comparison to the Conway location. But these fries somehow had managed to avoid being greasy, almost becoming dry in places.

They needed and desired ketchup like a lamprey needs a shark. I liked them. I know most of the folks who usually join me on my dining adventures would have wanted them saltier, but for me they were great. All in all, it’s a good burger. I will be back. 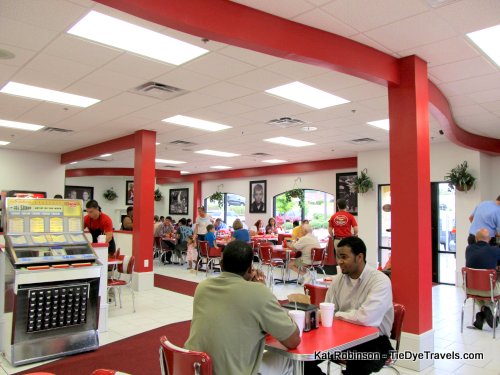 Amongst all the other things I noticed while I was there (the couple snogging in the parking lot relentlessly — in front of a big window, at that!) (the big surf-themed party room) (the fireplace, kept from the San Francisco Bread Company Days), just one thing bothered me. While the jukebox is free at the other locations, here there’s a charge. That sucks.

But not enough to keep me from recommending the place. If you want a big, greasy gut-bomb of a burger that’s also made with the freshest ingredients out there, you need to drop by David’s. It might even placate you until The Box reopens. That might seem blasphemous, but that’s how I see it.