Smoked and Marvelous at the Grapevine Restaurant in Paris. 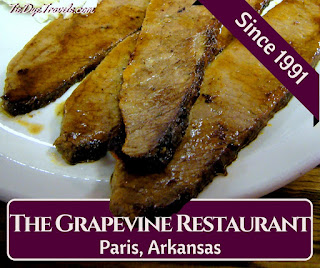 Open since 1991, The Grapevine Restaurant in Paris, Arkansas has become a family restaurant where the whole community turns out. Good bread and plenty of good food is the big reason why. 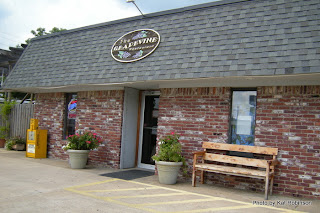 You probably feel I’ve been a little breakfast-heavy on this blog as of late, and you’re right. There’s a reason for that, which will soon become apparent. But that’s not to say I don’t still enjoy a good lunch.

I found a great lunch on a recent trip to Mount Magazine, actually, at a reader-recommended stop in Paris. Slid into the Grapevine Restaurant around 1 p.m. one hot June day and have been meaning to tell you about it ever since. 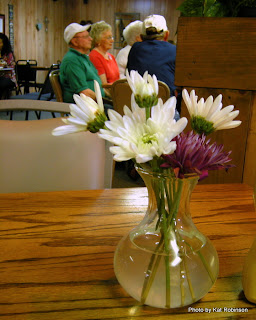 The Grapevine Restaurant’s been around since 1991, and it seems to be the local dine-in joint. When I went, the place was packed with all sorts of folks. The main room in the back was packed with regulars and a church group; the front room seemed to be full of people like me traveling through the area. While I was looking over the menu I overheard a couple of ladies talking about the hike they were planning to take, and another couple asking about Arkansas Wine Country. I was just about dead center of the restaurant at a little table right between the areas.

The menu took a bit to get through. It was packed with all sorts of tasty looking items — a full section of Mexican items, pasta items, steaks, sandwiches, you name it. It took me a few to decide, but once I saw the Smoked Beef Brisket Dinner ($7.99) I knew what I was having. 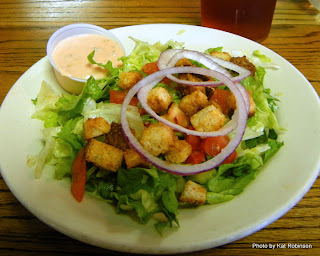 My waitress came over and took my order. I swear, not three minutes later my whole meal was on the table — salad, dinner, and bread. That quick. It was startling. I mean, really — the salad was delivered, and I had just started to take photos when I saw a shadow — my waitress with the rest of my meal. Kudos for the speed.

I was really in a salad-y mood (it was in the 90s that day) and was grateful for the mixed greens and tomatoes. The tomato didn't seem like the average hothouse variety. It tasted like a locally grown affair, and I wish I knew for certain. The salad came with lots of crusty croutons and red onions — the latter of which I carefully set aside. Raw onions and me, we have an agreement. I don’t consume a whole lot of them and they won’t give me gas. 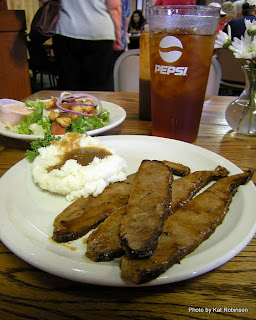 Four strips of barbecue-sauce laden brisket strips sat on my plate next to a neat little pile of gravy-topped mashed potatoes. The sauce itself was sweet and a little pungent; the brisket was butter knife tender with a great pull to it. The potatoes surprised me — definitely home-mashed, with little bits of clumpiness to them but plenty of cream to mellow it out. I liked the salty gravy, too, not overdone. 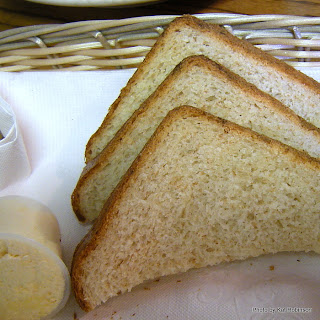 But the real star of the meal to me was the homemade wheat bread, soft and light and served up in its own basket with honey-infused butter. It was served warm and it was tenderly delicious, with just the right sort of texture and softness to feel like someone had taken great care to make it good. 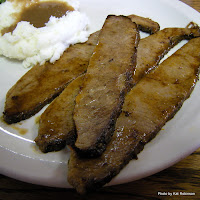 I was grooving to the mellow 50s to 70s soft pop soundtrack pumped in on tinny speakers. For a restaurant created in the early 90s it sure felt it had been around 40 years or more. Its wood-paneled walls also held other great appeals, such as a wide selection of pamphlets and maps to area attractions and a little booth up front featuring all sorts of Arkansas wines — first time I’d seen that anywhere!

I must admit, I lingered a bit. If I hadn't had pressing business atop Mount Magazine I’d have stayed longer and had dessert. That’s all right — I’m sure I’ll be back.

You can find The Grapevine Restaurant on Highway 22 just east of the turnoff for the mountain. It’s open Monday through Saturday for breakfast, lunch and dinner. For more information, check out the website or call (479) 963-2413.