A Pie Each Day at Sweetpea's Breakfast Burgers and BBQ in Kirby. 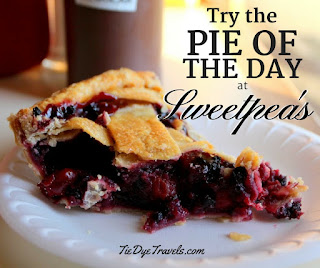 We lucked out on the pie of the day at Sweetpea's in our latest pie hunting adventure - and had a good hearty dinner to boot. Let me share more about this Kirby restaurant with you.

Grav and I are doubling down on hunting for pies as I muddle over the next book (I'll get to that shortly). By the time we'd made it to Kirby we'd already sampled four pies and traveled a good half a day. Any pie we encountered had better be a pie we really liked.

You may have noted that I included the pie at Kirby Restaurant in Arkansas Pie: A Delicious Slice of the Natural State. At the time, Sweetpea's did not exist. It opened in 2014 in a wood-sided shack a block or so away. We could smell the smoke from Sweetpea's from the intersection of Arkansas Highways 27 and 84 and US Highway 70, and that made the decision on which place we'd dine at this particular trip eaier to make.

After all, each of us has just one belly to fill. What, you think going around and eating pie is easy? 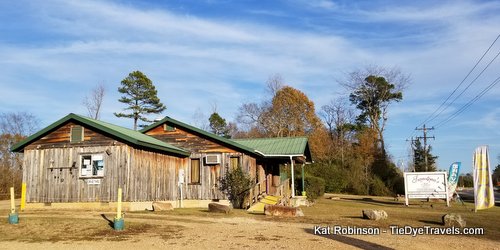 Grav and I got to the restaurant around four in the afternoon. Both of us were a bit sweet-ed out from our last two stops in Glenwood. While we wanted to check out more pies, it wasn't happening until we tried something that wasn't going to make us angry at sugar.

We dithered with the idea of the drive-thru but decided to go dine in instead. Once we crossed the front porch and opened the front door I knew that was a good decision. 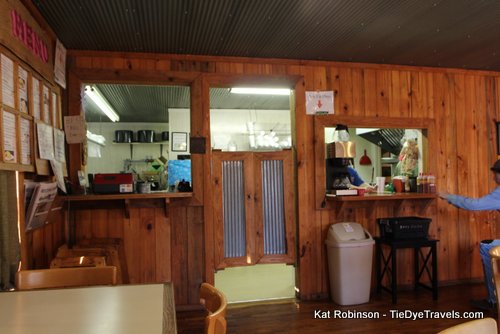 Sweetpea's isn't large. There's a single dining room with five or six tables and two counters - the one on the left next to the menu board where you order and the one on the right where you pick up your trays. Below that second window is a can for trash and a box for metal forks. 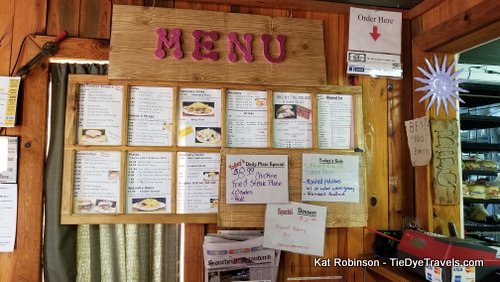 While there were plenty of burgers on the menu, I knew I really needed some barbecue. That smoke scent had come down the road at me and I wanted to satisfy that craving. Grav was grumbling over "please, we need to eat more than just pie," and I was nodding when I ordered a brisket sandwich.

"Catch her!" I heard a lady say in the back.

"Ma'am," the woman at the register started.

"We don't have sliced brisket," the first lady, apparently the cook, told me. "Are you okay with chopped?"

The other lady wrote that down and looked up. I knew she was going to ask me for a side.

"At the same time is fine by me." I'd seen the sign that stated the Pie of the Day was Mixed Berry (blueberry and cherry) and figured hey, order it up front and then I'd save room for a bite, right?

Grav placed his order and we had a seat at a table by the window. It was good to not be in motion for a few minutes. I looked out the window whistfully at the hummingbird feeder. It was nearly 70 this November afternoon but of course the hummingbirds were long gone.

And our order was up, that quick. Sweetpea's, I'd find out later, bills itself on its Facebook as a fast food restaurant and smoker of meats, and they demonstrated that on this day. 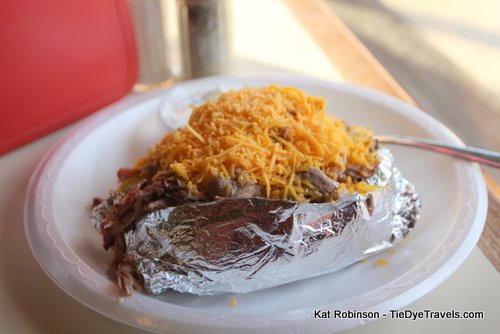 Grav went in search of barbecue saucel, which gave me plenty of time to shoot away at his stuffed baked potato. It was overwhelmingly covered in cheese, below which rested an ample amount of pulled pork. A plastic container of sour cream was also provided.

Grav was bantering back and forth with the cook about the sauce - turns out, the spicy sauce was almost out, but she managed to talk a tableful of people out of theirs for him to bring back to our sitting. He also brought the house sauce and the sweet sauce, and we both sampled a bit of each - well, I say that, but he never handed over the spicy, which he mixed with the regular sauce over his baked potato.

I tried a little on the edge of my plate. I liked the light heat of the regular but loved the sweet sauce a little more, especially with its black pepper bite. I did find myself combining them a third regular to two thirds sweet on my sandwich. 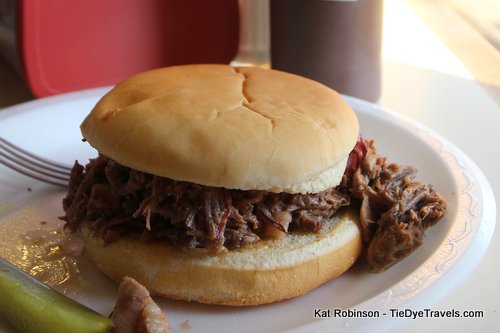 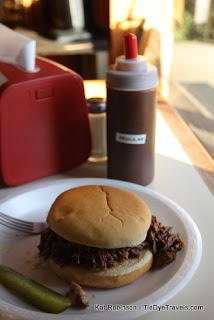 That sandwich. See, brisket tends to be dry, but this was not. This beef was the consistency of slow roasted pot roast, but with a bit more collagen. It was really delightful. I didn't see any resemblance of a smoke ring but I'm sure that had to do with the chopped nature of the meat. It was served "dry" with no coleslaw or sauce on a plain white bun. But it was by no means dry. In fact, there were some lovely notes that might have been a fruit wood in that meat.

The meat was my saving grace - not just because it was good, but because it was a delectable protein on a day when we'd been eating a lot of pie. I found myself savoring every bite of that sandwich. I looked up, and Grav was through that potato, too. He later told me the meat was pretty good, but that baked potato itself was perfectly cooked - a gripe he's had at other places where the potato is either hard from not being baked long enough or hard because it's been overcooked.

We're both done with our entrees and we're just staring at this pie. And there's some trepedation going on. I mean, serious trepidation. I am not up to those 22 restaurants in a weekend days any more, nor am I up to whole slices of pie. And this one... 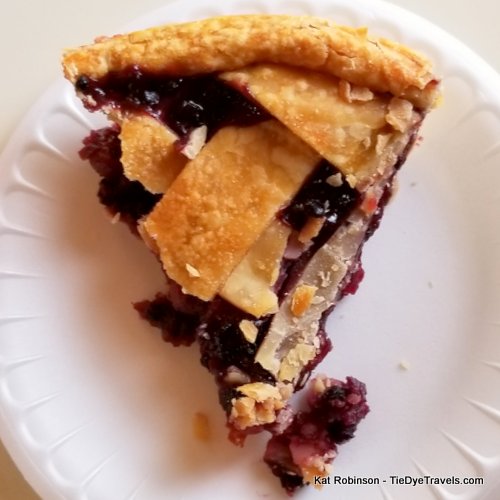 This one was gorgeously burgundy, deep, thick, in no way was it going to run out over the plate (unlike my own Thanksgiving day massacre of a blueberry cream cheese pie, but I digress). It was on a buttery, golden crust with evidence of wide strips of lattice on top. It looked like the sort of pie you see on the cover of Taste of Home.

I looked at Grav. He wasn't doing it.

I looked at the pie.

Hey, there was a little piece at the bottom. I speared it with my fork and put it in my mouth. 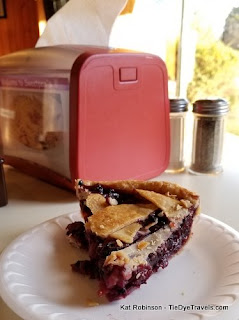 Okay, that's a good pie. It didn't taste like filling from a can. Actually, it tasted like carefully rehydrated summer fruit that had been rendered down until the flavor was really strong. It was ample.

And it was not going in my belly. I was done for the day.

We begged a box to take the slice home in and cleared our table. As we were walking out, Grav asked me "so, what did you really think?"

"I like it. It was like pot roast, but that's about exactly what I wanted right at that very moment."

For less than two seconds, I dithered on the idea of dropping in at Kirby Restaurant for another slice for our research. But once my bottom hit the seat of the car, I knew I was done for a while. We'll get back around to Kirby Restaurant next trip.

Sweetpea's did good by us, and it wasn't very expensive. I'll be curious to see what the next Pie of the Day happens to be, once I come down to have a shot at the restaurant's burgers. Grav and I both also noted the place has shaved ice, which is a winner in his book.

You'll find Sweetpea's Breakfast Burgers and BBQ on Highway 70 just west of the intersection with Highway 84 in the community of Kirby - a short distance southwest of Glenwood.  It is open Tuesday-Saturday 6 a.m. to 8 p.m.  For more information, check out the restaurant's Facebook page or call (870) 398-4004. 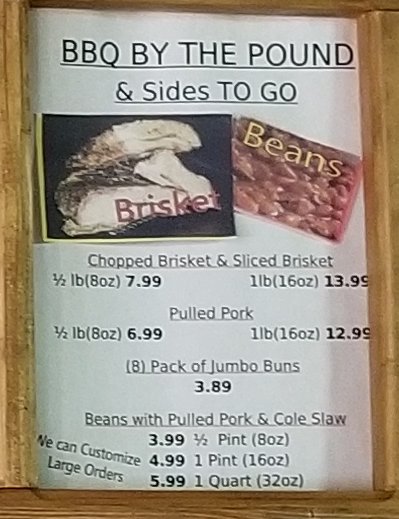 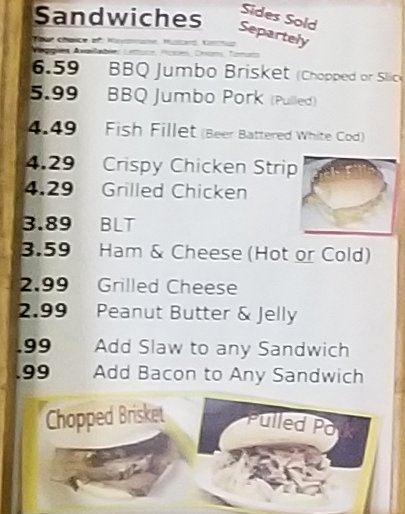 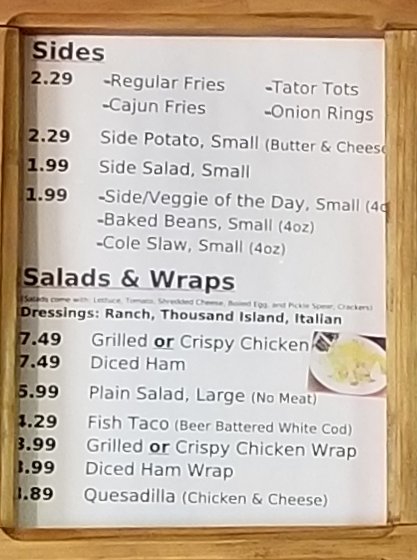 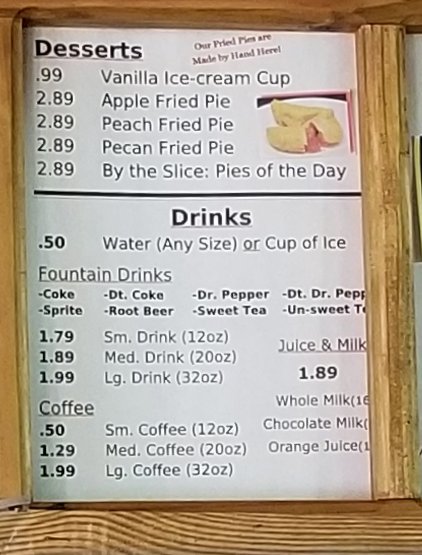 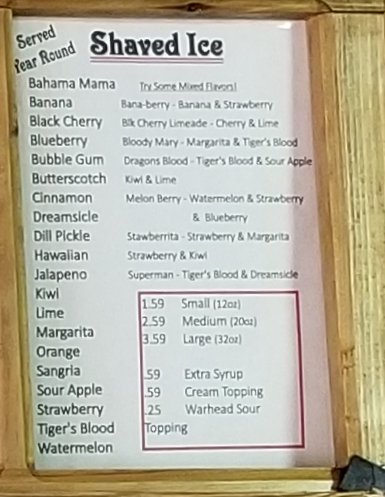 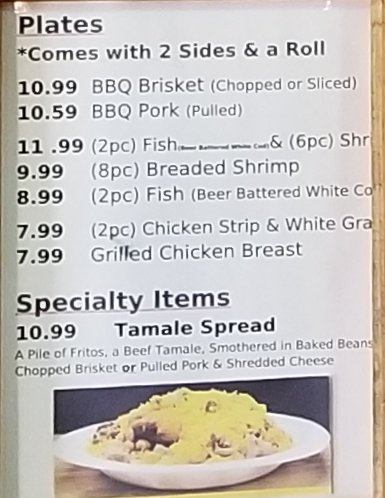 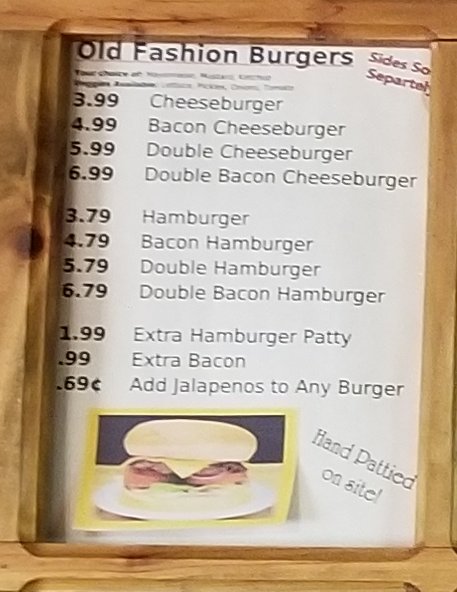 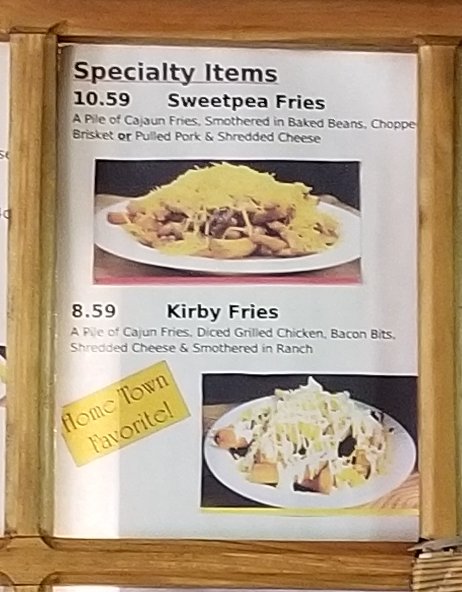