Natalie's in Batesville Tantalizes Me, And It Will Tantalize You Too. 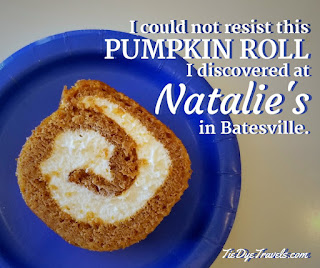 Rarely am I so tempted to throw fate to the wind to try all the things at a restaurant, but the more I saw of Natalie's menu and desserts, the more I had to resist the urge to consume everything.

Grav and I were in Batesville for a shopping expedition to the lovely not-so-secret fabric funland of Marshall Dry Goods. We wanted a light but delectable lunch, but found that Elizabeth's downtown ws closed since it was a Monday. We went wandering.

That driving about took us by a few places we'll revisit, including the adorable Batesville Diner housed in a shiny Streamliner-style rail car on the east side of town. It was closed, though, and while we briefly considered Mama's, a quick Google search popped up a Louisiana-style eatery not far away. 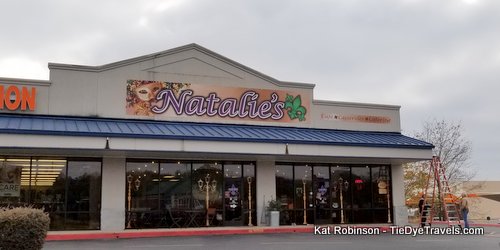 The moment we walked in the doors at Natalie's, I knew I would not be disappointed. The restaurant's mix-and-match tables and chairs, eclectic art and such was plenty - and it's all covered in throws (beads) here and there. The ordering counter was at the back. It smelled like fresh baked bread and jambalaya. I knew we were going to get something special. 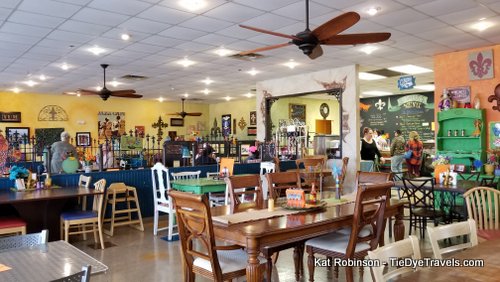 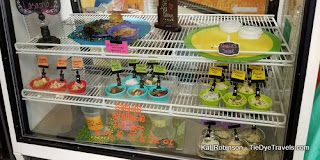 But we had to wait for it in the brief line at the counter. That's where I found myself gazing longingly into a couple of refrigerated cases. The first was one of the smartest things I've seen in a long time. See, Natalie's has a very varied side item selection, so in the first of these two units there are labeled samples of each and every one. That's where I could see examples of the three pasta salads (cheese tortellini, shrimp pasta and tomato basil pasta), the chicken sausage gumbo, the cold offerings (greek pea, black bean salsa, tomato cucumber salad, broccoli/cauliflour/tomato, "pink fluff" and fresh fruit), the other salads (Asian slaw, broccoli slaw, potato salad), the dips (spinach, corn) and the "sandwich salads" (pimento cheese, tuna salad, chicken salad and Cajun chicken salad) - all in one place. This is brilliant. Of couse, I realized later it was also to show what could be picked up by the ounce for take-away dining, but my brain wasn't registering that at the precise moment. 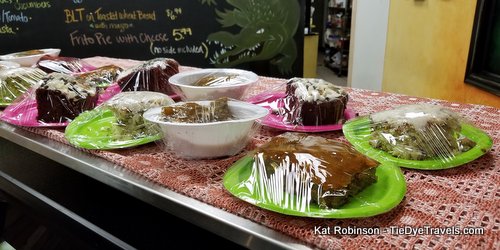 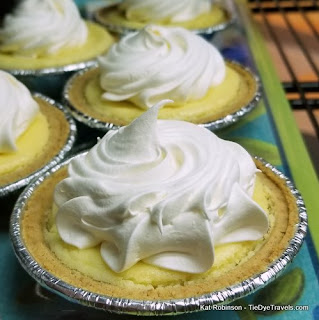 What it was registering was the marvelous selection of desserts. As many of you know, I've been aiming more towards protein these days in an effort to shape up, so seeing a case of these almost irresistable desserts was tough. Within the case were strawberry parfaits, pumpkin mousse, lemon meringue pie slices and tiny lemon tarts - and a long pumpkin roll that really set me to salivating. 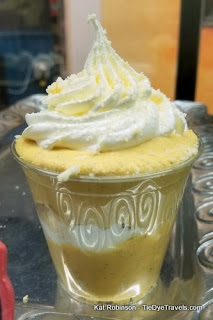 Atop the case were individually wrapped slices of red velvet and Italian cream cake, along with bread pudding and other delights. There was also a small beautiful case of cupcakes.

Restraint, I kept telling myself, as I pored over the menu board. Honestly, though, despite the initiative to eat more meat and nuts, I knew the moment I laid eyes on the board I was having some cheesy chicken spaghetti. There was no doubt about it.

There were a lot of other options - so many, in fact, that I did see one diner after another pause to collect their thoughts at the register. After all, having one of four sandwich salads to choose from is enough - but adding in the complexity of bready wrapping (wheat or white bread, sourdough bread or croissant, a variety of wraps, Ritz crackers or gluten-free crackers) and the side was dizzying. And that was just the combo. There were also the options of paninis - chicken salad, chicken club, a hot-and-spicy, a Reuben, turkey, veggie-Swiss and one called Smokey - and even a BLT. There was a Frito chili pie and then the three daily lunch specials, which in addition to the aforementioned spaghetti were an open faced pork tenderloin sandwich and a meatloaf sandwich.  Whew.

Oh, there were also salads - and I briefly entertained the shrimp and avocado salad. There were also garden salads with turkey or ham, and a tomato stuffed with either chicken or tuna salad anyway you totally get the point and I should just get on about our experience.

After we ordered, Grav and I filled our cups and found a table, where I hoisted the little numeric card onto its stand. I've missed our more relaxed trips and it was a great chance to catch up over our experienced unshared as of late.

While we waited, I noticed a couple going through a consult for what may have been a family reunion or a wedding - I wasn't certain which - that Natalie's would be providing the food for. The restaurant, from what I gather, is just as popular for its takeaway food as for what's offered in-house. 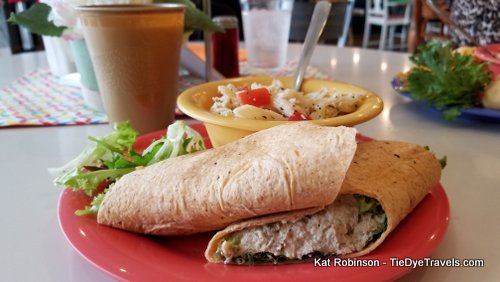 Our dishes arrived, and Grav started to grumble that I'd chosen better. This is a normal thing for us, so don't worry. I snuck a bit of his chicken salad after shooting his plate - said salad included in a tomato-basil wrap served up with tomato basil pasta. The pasta was surprisingly light - but the better wow was the chicken salad itself - the Cajun chicken salad, as it were. I'm used to this name for a dish being accompanied by red-spiced chicken but here that wasn't evident at all, not until that snatched bite which had its own bark to it in the form of the pepper jelly included in its makeup. In fact, the building heat was particularly welcome on a day where the temperature huddled in the 40s. 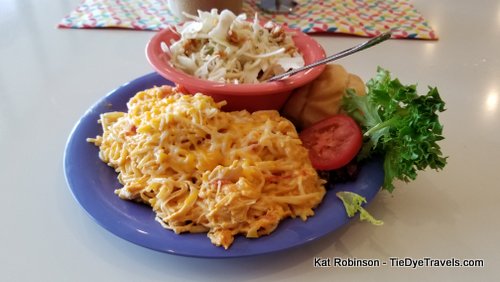 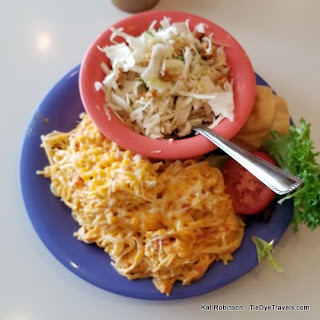 He was griping because the portion of my cheesy chicken spaghetti was rather gratuitous. Unlike other such offerings, this version was an orange color and included fine linguini noodles. It spread across the arc of my plate fragrantly, calling with its supreme load of carbohydrates like some strange siren song. I'd chosen the Asian slaw to match it with - and while not a recommended pairing, I liked both. The slaw was mostly chopped moist cabbage mixed with fried Ramen noodles that had been doused in a little sugar syrup and soy sauce. I wanted that cabbage strongly on this day. Let's be honest, I wanted it all, and that was my own fault for not having a substantial breakfast before our expedition into north central Arkansas that day. It came with a little yeast roll that would have benefited from butter, had I chose to seek some out. 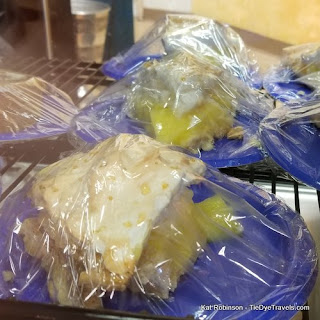 This was all quite marvelous, but I will be honest here - I was trying to be good, trying to be so good. Yes, in the back of my mind I was fiddling with the idea of grabbing a slice of pie for research purposes, but the beloved pumpkin roll was of far more interest. I'd dismissed both, though, and excused myself for a restroom break. 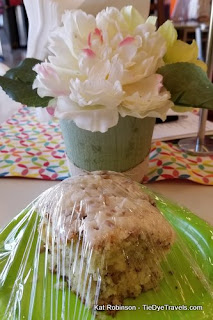 Grav didn't have that sort of restraint, and when I returned I discovered he'd not only gotten about getting himself a decadent slice of Italian cream cake (one of his favorite desserts) but had heeded my craving and placed a pumpkin roll slice at my station as well. That bugger.

Mind you, I didn't have much chance to shoot Grav's cake. Once I'd shot it in the plastic he was into it before I could grab a shot. I did manage a pinch of my own and appreciated the cream cheese frosting, the ample amount of pecans and coconut and the sheer moist delight of the slice. 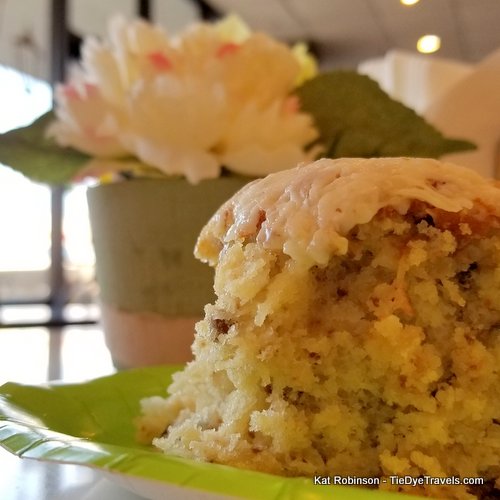 But I still had to deal with that pumpkin roll. 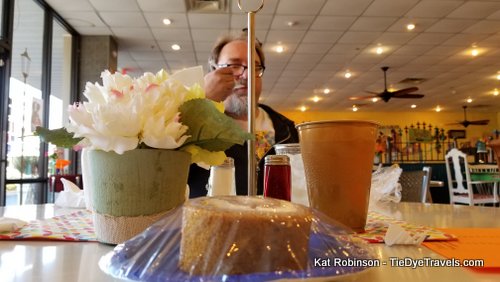 I was full. I really didn't have room for it and I was trying oh so hard to be good. 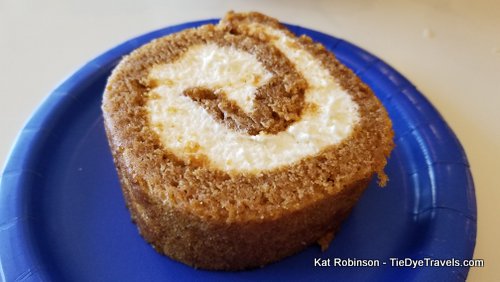 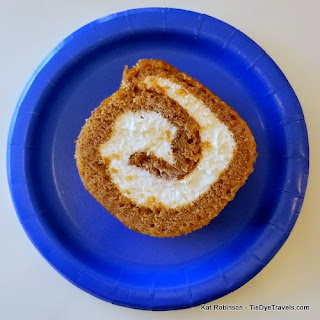 I finally compromised and, after taking my photographs, tried a bite. It was better than I anticipated, and I savored the moist and rather flavor-dense pumpkin cake against the not-too-sweet cream cheese filling. Then I wrapped it back up and took it with us.

When we returned to Little Rock in the afternoon and picked Hunter up from school, she argued with me over the pumpkin roll's fate. She felt it belonged in HER belly. We ended up splitting it later that night. I'm kinda glad Natalie's isn't closer, or I'd have had several slices by now and would be all the worse for it. 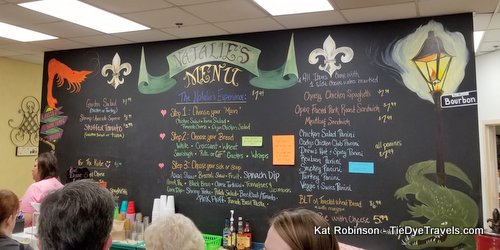 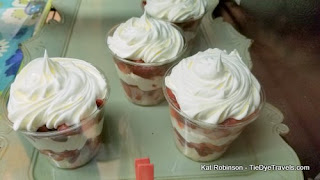 I'm glad to have found Natalie's - and kind of embarassed I hadn't headed down towards Batesville on one of my many forays into the city over the years. I've been spoiled by Triangle Cafe and Elizabeth's and even Fox Creek BBQ and had shortchanged this place. It may not have been around as long as standards such as Josie's and Kelley-Wyatt's (which, I'm told, has taken up residence at the Ramada Inn) but it certainly has some innovation going on there that I could see establishing the place as an Arkansas Classic.