Get Set Up with the Set-Up at The Fish Net in Caddo Valley. 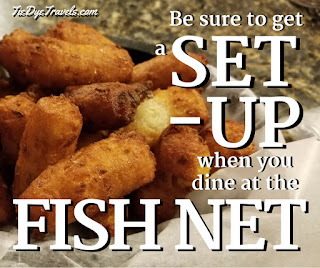 The longstanding catfish joint near DeGray Lake has been a family go-to for lots of folks over the years. The "set-up" may be the best bet on the table. 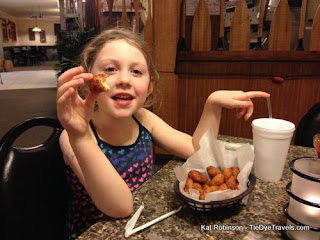 I've dropped in at The Fish Net a few times these past few years. Hunter and I made a point of giving it a shot when we took our inaugural Spring Break trip along Scenic Arkansas Highway Seven a few years ago, and I will note the simple fact - she really didn't need anything but "fixins" - the side item quartet known as the Set-Up. 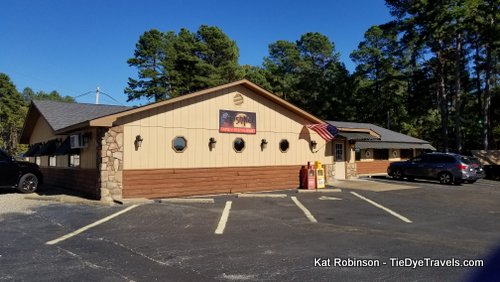 See, that's what comes to table for most diners at The Fish Net - a selection of beans, green tomato relish, coleslaw and hush puppies that accompany most meals at the restaurant. Me? I tried to buck that trend - because I eat a lot of hush puppies, I swell up like a blowfish. It's a fact of life I'm just starting to accept.

That didn't keep me from craving the little extruded savory bits, though, on this last trip. My brother and his wife, my mom and Grav and I all visited one afternoon on the way home from a trip. Mom had been looking forward to it for some time. We got in, looked around at the menus and made our choices. I went for a grilled platter of chicken and shrimp and eschewed the Set-Up for a dinner salad. The rest of the party went for those fixins. 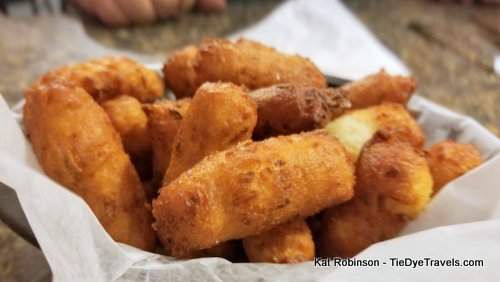 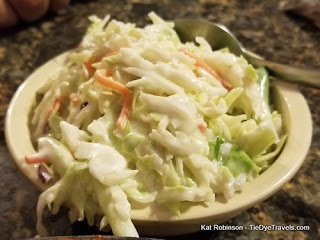 What was delivered to table was a smattering of bowls - a bowl of baked beans, a bowl of coleslaw, a bowl of green tomato relish and a basket of hush puppies. They were to be shared amongst those who got the Set-Up along with their plates, and those bowls went back and forth a bit. Fortunately, they were refillable - which was fortunate. 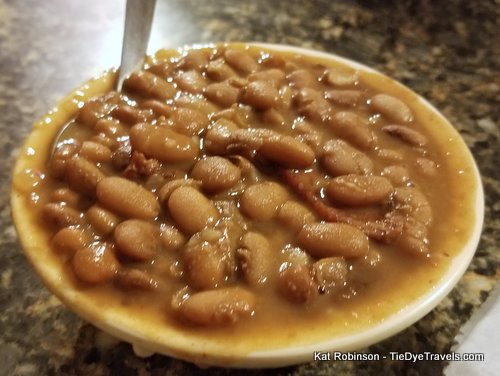 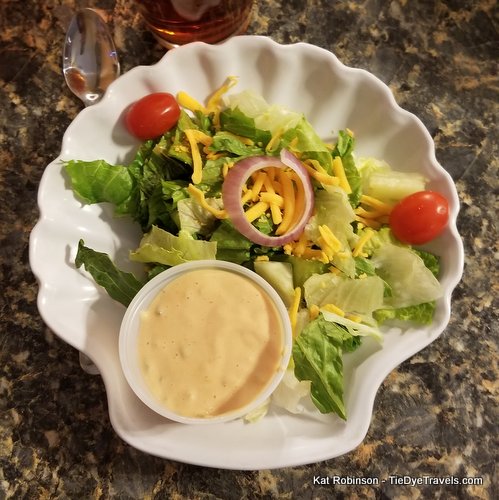 Mind you, we're all talking and kinda looking at our watches, waiting for our meals. It was just after midday and there had been a rush when we got in, so I took that into account as I munched on my dinner salad. The bowls kept getting passed back and forth in front of me, though. 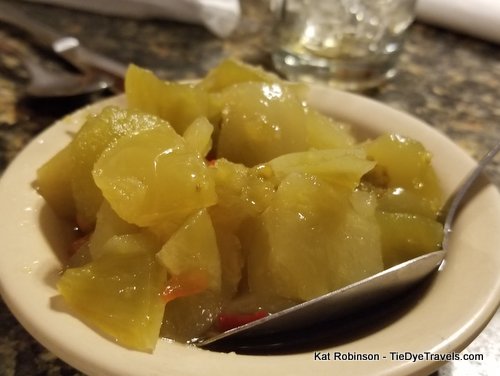 It was chilly in the restaurant - perhaps because that was the particular week everything decided to get chilly in the state - and we were just kinda huddled over these bowls. I finally couldn't take it any more and nabbed a chunk of green tomato pickle from one of the bowls. My craving for this specialty had been strong, and I savored that little chunk guiltily. The Fish Net does, after all, have some of the best green tomato pickle relish in the state.

But my craving wasn't satisfied. I was smelling catfish and those hush puppies were right in front of me, and I snapped. I grabbed one, took a third off the end and popped it in my mouth. And I remembered why Hunter had gone through a whole basket of these things. They have a lovely savory flavor - almost no sweetness at all - but they were moist and they had a nice flavor of onion to them. The extruded beauties were just irresistable.

What was more was, right on the table, there was a whole bowl of butter packets. And when I mentioned it, that's when Grav decided he should butter his hush puppy, too.

After he asked for another bowl of beans. 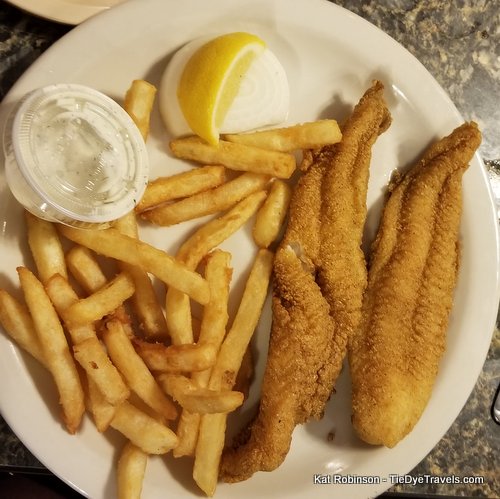 So our food comes out. Mom had chosen the catfish, which is always rather excellent at The Fish Net. It wouldn't be worth its salt if it wasn't. 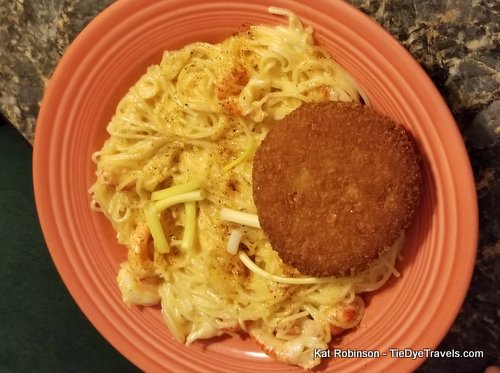 Zack had gotten himself a bowl of some pasta with a crab cake on it. He ended up taking half the pasta home. It was pretty hearty. Somehow I missed shooting Amber's fried chicken but it also looked ample. 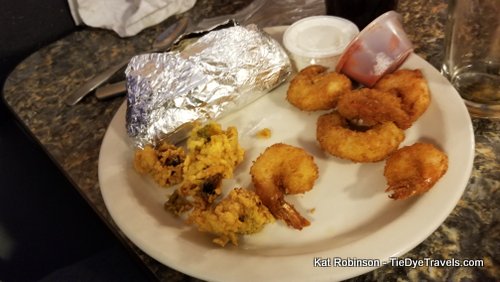 Grav, on the other hand, threw a fit when he got his plate. He'd asked for a half-and-half of fried shrimp and oysters - and got two oysters.  He wasn't having any of that. He asked for the manager. The manager told him the price of oysters was pretty high right now thanks to hurricanes in the gulf, but did go back and get him three more, larger oysters.

He and I also split a basket of fried clam strips, which were pretty good.

Thing is, we've been joking about this a lot lately, but it's true - I seem to be winning the lottery for choosing the best bang-for-my-buck dish. 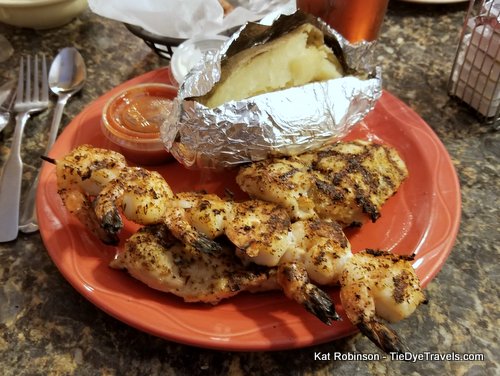 This was the grilled chicken and shrimp - barely blackened but tasty chicken breasts and a skewer of similarly spiced shrimp. I was quite pleased. Probably more pleased than I should have been. I don't know. I just know that by the time it came to table, I was dying for some shrimp and I was thrilled to get this.

So thrilled, in fact, that I really didn't even get into my baked potato. Grav would be caught later sneaking it for his dinner. I did not mind.

Thing is, on leaving the place we all agreed on a single thing - some of the food was all right, some good, some excellent. What was really superlative, though, was the Set-Up. Next time, Grav gets just the Set-Up, as does Hunter. Because as far as bang-for-your-buck eats, this fisherman's choice beans-and-cornbread variety is the way to go.

You'll find The Fish Net Restaurant on Scenic Arkansas Highway Seven not far north of its junction with Interstate 30.  It's open Tuesday-Sunday for lunch and dinner. For more information, call (870) 246-7885 or check out the website. 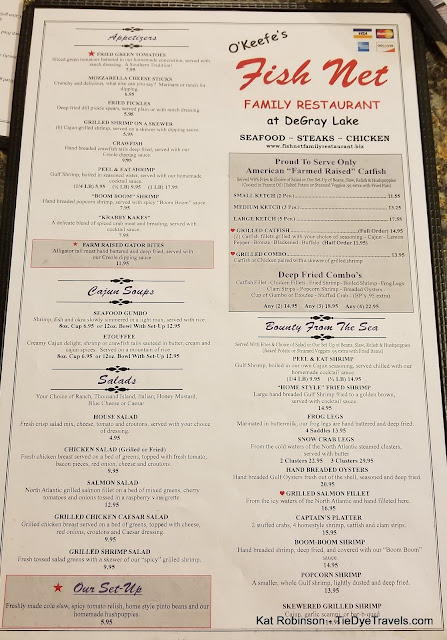 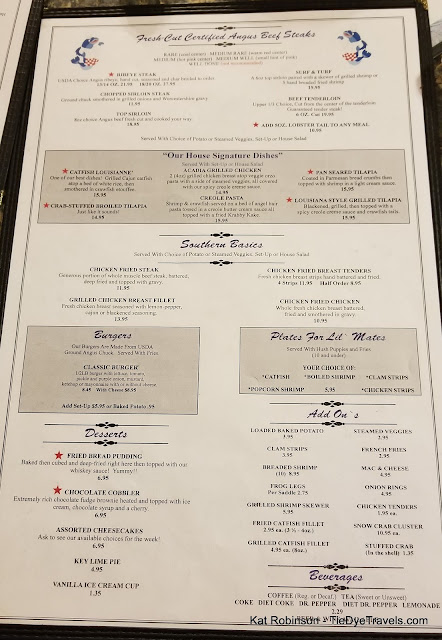 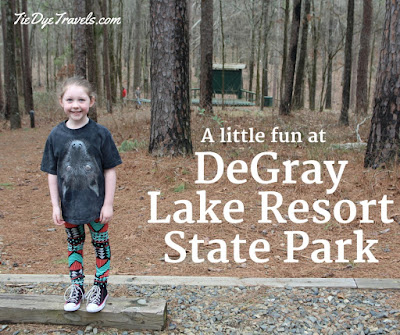