Marlar's Cafeteria in Magnolia Has Opened My Eyes to Raisin Pie. 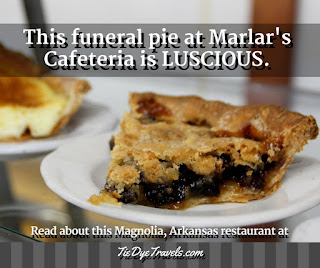 The humble dessert, often called "funeral pie," has been low on my list of pies to enjoy in Arkansas. But a visit to Marlar's Cafeteria in Lower Arkansas has shown me raisin pie can be a magnificent, syrupy end to a midday meal.

Marlar's Cafeteria itself deserves a note. It is a bona fide Arkansas classic, originally opened in 1958. The Lindseys - Ray and Traci - have owned it for quite some time but it still carries a pretty 1950s South Arkansas air to it, with wood paneling on the walls inside the low concrete block building along North Vine on the northwest side of Magnolia. 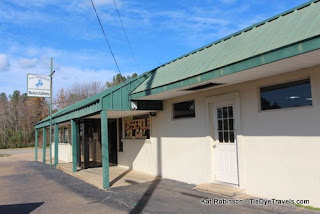 It was not on my initial list of pies to photograph in my second of umpteen trips I've been mapping out on my Great Arkansas Pie Hunt. I'd already spent a while up the road in Prescott with the folks at Flywheel Pies and had a stop-in at Barr's Junction in Rosston which, to my utmost surprise, didn't have any pies out that particular Wednesday. I was headed in to shoot pie at Magnolia Bake Shop, the oldest bakery in Arkansas, and to move from there to The Backyard Barbecue Company, Camden and eventually El Dorado on this trip. But as I rolled into town I smelled something delicious, and decided it was worth a stop-in. 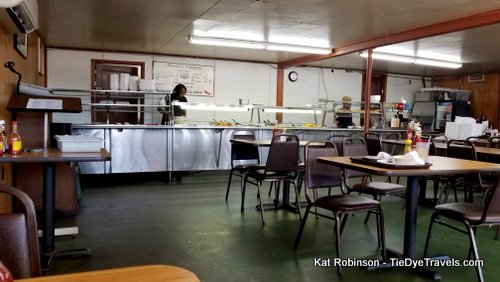 Once through the vestibule, I found myself in the center room of a three-room dining area, facing a cafeteria line. As I squinted against the change in light, I thought how quaint it was that the prices hadn't changed in all those years.

I was hoping for pie. In fact, my original plan was to quickly check and see if the place had pie, grab a slice, photograph it and be on my way. But the restaurant smelled so good I picked up a tray and started looking over everything. I briefly considered the fried chicken and the hamburger steak but instead found myself asking for cheesy chicken and rice casserole with a side of mixed vegetables. 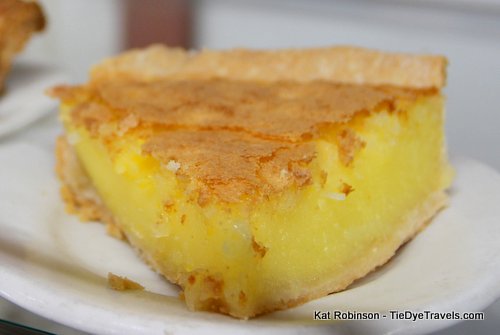 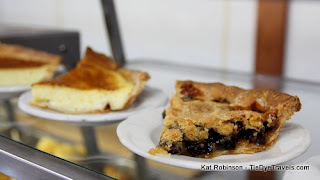 The pies were all at eye-level on one shelf (the shelf below having its share of cake slices) - egg custard, coconut custard, sweet potato, and...

"Yes it is!" the lady behind the counter told me, "made right here!" 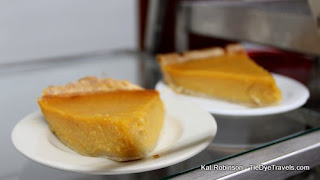 I eyed the pie. My encounters with raisin pie are... well, I've had a few over the years that have been edible, if only just. The raisin cream pie at Chef's In up in Jonesboro wasn't too bad but it was a nice egg custard with raisins. The raisin pie at Marshall Restaurant up in Marshall was more typical - a short pie compressed to a heavy but thin slice of almost overpowering raisin.

Well, you only live once.

My entire tray ran me about six dollars. I went over and found a place to shoot my pie and eat my lunch. 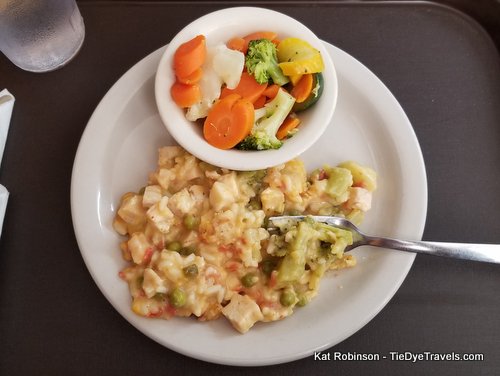 I will tell you - that chicken casserole tasted like the sort of thing I whip up when I'm trying to figure out what to eat when the bills are tight. That's not to say it was not good. It was very good, very comforting and full of huge chunks of chicken, spiced about the way I would have spiced it. I gave myself a gold star for my broccoli and cauliflour and carrots and such - more vegetables on top of what was in the casserole but very important for a woman who's on a quest for pie. 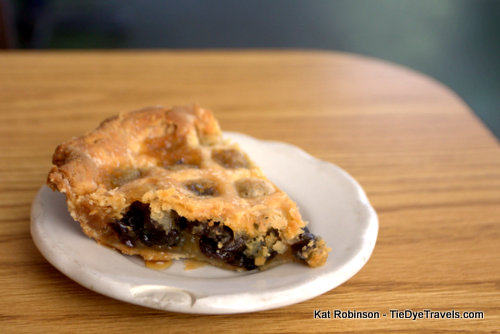 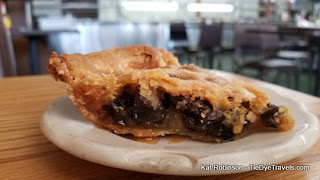 I pondered the pie for a short while. I knew there were more pies to come. I knew I could not justify having more than a bite. So I prepared myself for that bite.

And then I had a couple more and felt enormously guilty and somewhat fat, because my restraint went out the window. 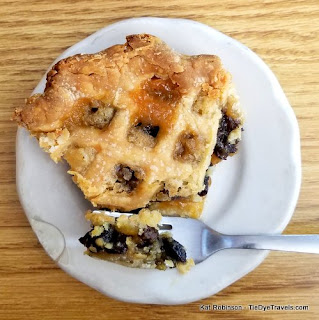 See, the whole idea of a raisin pie, or "funeral pie," is something that's been playing out in my mind lately. I've had several people ask me for a place that made a decent one and honestly I could not endorse one.

A funeral pie, for those of you who are not in the know, is a pie that's made
with what's on hand when one hears of a death in the family or immediate vicinity. It is a double crusted pie - usually with a lattice top - where the filling is somewhat rehydrated raisins. Because it is made from mostly shelf-stable ingredients, it can be made and left to stand for a few days while other business is taken care of. Its economical and long-lasting nature makes it perfect as a dish to bring to the grieving and forlorn, and many will tell you the typical raisin pie has the flavor only the grief-stricken would love.

This was few of those things. There are few dishes that truly embody the idea of luscious to me, but this was it - swollen raisins in a buttery syrup between two layers of dough so lightly crusty they became instant soft crumbs on the tongue. The top layer had been pressed rather than latticed, and the criss-cross shape let little of the goo within escape.

I was enraptured. I was delighted. I was also full. I begged a box for the other half of my slice and prepared to exit, but not before capturing this shot. 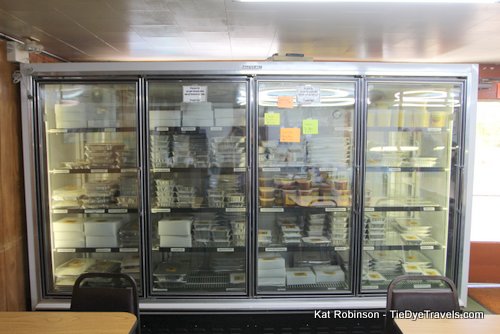 That is an entire gigantic freezer case full of take-home dinners, pies and sides. And if I had been at the tail end instead of the head end of my journey, I'd have loaded up for several days. The prices are marvelous - and the sizes come in a smaller portion for a small family or a larger for, well, Thanksgiving I guess. There were chicken enchiladas and Mexican casseroles, a couple of varieties of spaghetti, smothered steak (!), beef noodle casserole, tuna casserole, meatloaf and something called King Ranch Casserole, along with dressing, "special" green beans and a host of vegetable casseroles - squash, corn, sweet potato, broccoli cheese. Also dumplings, chili, gumbo and such by the quart, and pies of all sorts, a half dozen different cakes....

A tall fellow came over and handed me a list to take home of all those casseroles and such, probably noticing my gaping grin at the display. Oh yes, I will be coming back through at some point, and I will eat well afterwards.

If you find yourself in Lower Arkansas, try to manage your way by Marlar Cafeteria during lunchtime. Find yourself without the time for a sit-down meal? Then take that home cooking with you.