Steaks Are High(ly Craved) at Outback Steakhouse in Conway. 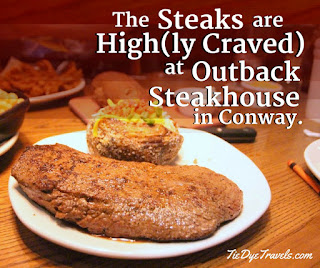 The popular Australian-themed chain is a favorite of ours for birthday celebrations, not only for the always-steady fare but because of one tiny kids menu detail.

Now, you know I tend to talk far more about our local restaurants here in Arkansas than I do any sort of franchise that extends past the borders of Arkansas. But as I have pointed out before, local outlets of these franchises employ folks who work here, including a lovely array of individuals who cook, wait tables, host and generally make a night out lovely for us all.

And wow. Yes, this Outback Steakhouse is firmly set in the 21st century. 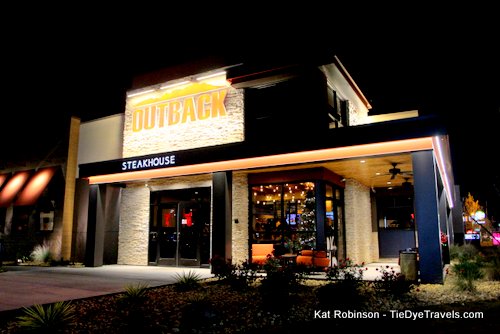 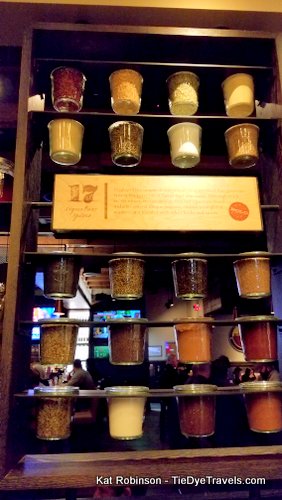 While I always loved the little details of the old stores, this one’s just pretty, with sleek metal-and-glass on the outside and gorgeously lush dark hardwoods on the inside. I loved little details such as a spice rack of jars in the waiting area and Aboriginal-style illustrations on the interior walls.

The three of us – Grav, Hunter and myself, came in on a Thursday night expecting a little bit of a wait. I was worried when we first arrived, since there were already folks waiting and what appeared to be a very busy restaurant, but we waited less than ten minutes before we were given a booth on the restaurant’s south side. 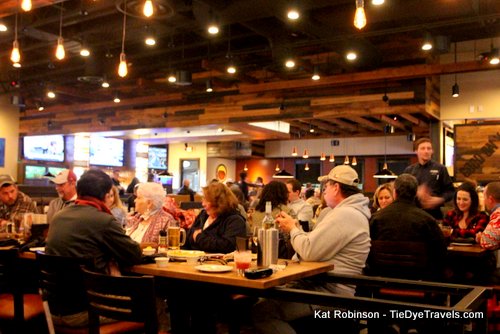 This location is larger than its predecessor, seating 242 people in a large open room and a smaller bar area. This particular Thursday there were, if I counted correctly, four different party-style gatherings in the space, which could have made for a  very chaotic situation. But the staff seemed to be very calm, darting about like a very well-oiled team. 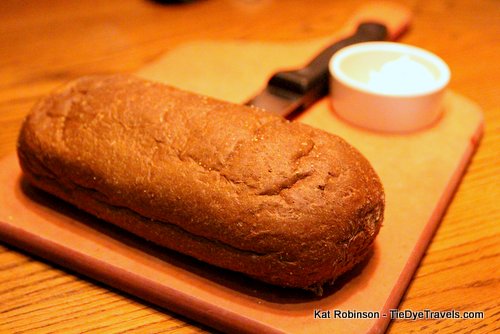 Once seated, we received our menus and that lovely brown bread I find nigh on irresistible. I want the recipe for this bread. No, really, I do. I remember back to my first Outback visit in high school to the location in North Little Rock and just digging that bread and fresh butter and those jolly sweet knives. When business trips over the years I worked in television meant a stop at an Outback, I was always quite content. 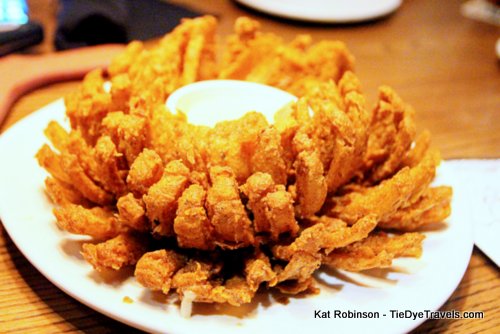 We started off by ordering a Bloomin’ Onion – which, to my surprise, Hunter had never encountered. I was trying to figure out why and determined it’s because we’d been sampling our way through the appetizer menu over the years, and the last time we’d actually had a Bloomin’ Onion was when she was still too young to really dive in. But boy, did she dive into this one. Grav asked for an additional ramekin of sauce, which was awesome since they both got into it quite a bit. Hunter was grabbing big handfuls of the strings and dividing them on her plate before dunking them one by one. 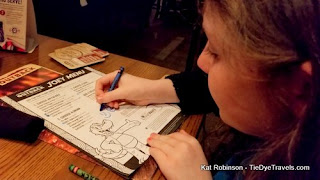 She alternated between nibbling and coloring on her menu – which in itself was a surprise to me. I don’t know how I’d missed it before, but my daughter’s craving to be treated like an adult was well satisfied here. See, there’s a junior sirloin on the kids menu – which comes with a side item and which comes cooked to order. Our waitress didn’t even bat an eye when Hunter asked for hers rare. She’s a savvy nine year old, and even she noticed there was no questioning of her decision there. That alone deserves massive brownie points. 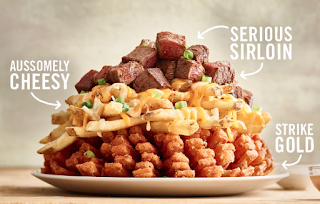 My only regret on the Bloomin’ Onion was that we were so excited to order one (because Grav loves them so much) that we didn’t notice the new menu offering of the Big Aussie Bloom – which is a Bloomin’ Onion topped with Aussie Cheese Fries, topped with a center-cut sirloin. Oh my. So yeah, next time I go that’s all I’m getting. 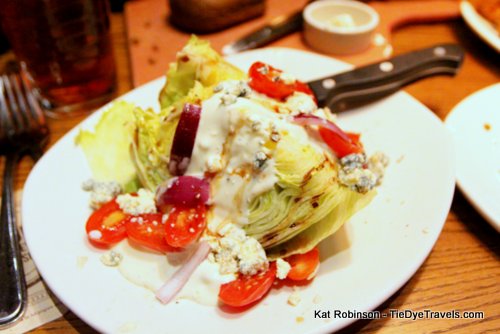 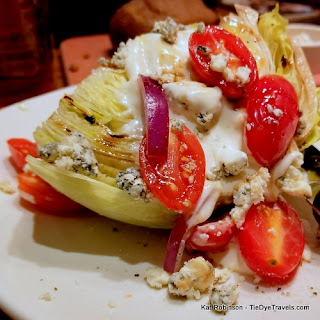 Well, maybe. See, every time I go, I have to have a Blue Cheese Wedge Salad. I’ve never had any problem ordering mine without bacon, and there’s always plenty of blue cheese to make me happy, both the dressing itself and the huge chunks of blue cheese in it, the contrasting sweet balsalmic vinaigrette glaze and those so-ripe grape tomatoes. I crave it. I’ve dropped by the Little Rock location many a time for curbside service just to pick up one of these salads to munch on when I’m on a deadline. Of course, I’m also weird in that I usually ask for extra blue cheese dressing for my steak, but that’s all me.

This salad was both hot and cold – with a nice char on the lettuce that I don’t recall getting my last few visits elsewhere. But I loved it. It gave just a little caramelization to the iceberg lettuce. I’m in. 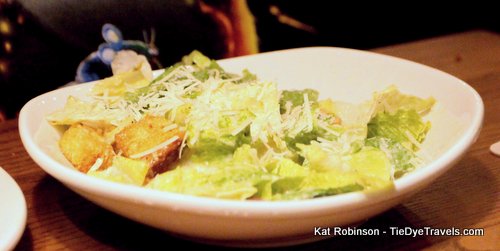 Grav got his Caesar salad, which is his default and what he always gets because, well, Caesar salad. Hunter took the opportunity to claim great swaths of the Bloomin’ Onion. 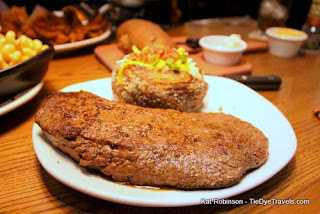 We were pretty surprised how quick our entrees came to the table, considering the size of the various parties in the restaurant that night. Grav had begged to try the new 18 ounce sirloin steak, which I was totally cool with him getting. After all, I knew he wasn’t going to eat all of it in one 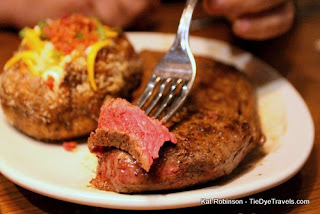 sitting. One of his great joys with any Outback steak is when he can take home some for breakfast the next morning.

This hunk of beef was huge, dwarfing his loaded baked potato on the plate, spreading from one end of the platter to the other. A cut showed a gorgeous rare to the meat, exactly as he ordered, and he just kept bragging on his plateful. 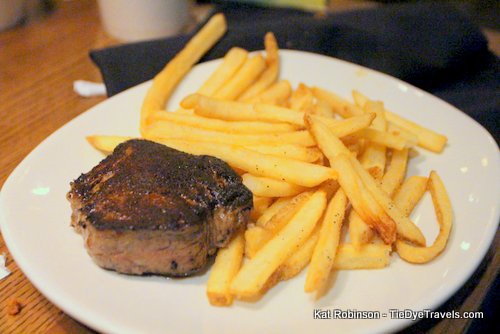 Mind you, there was enough meat there to serve him, me and Hunter too. She was well pleased, though, with her very own little rare steak, which proved to be exactly the right size. I helped her cut it (the big knives are still a little hard for her to handle, despite her long fingers) and she took off on it. She didn’t even ask for steak sauce. 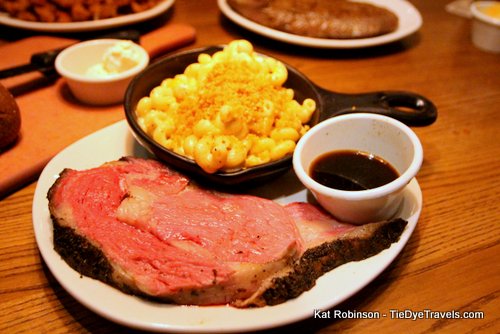 That little bit of work on her steak meant my prime rib had just enough time to rest. Yes, this is my usual dish – a nicely spice-rubbed medium rare-closer to rare slice of well-marbled goodness, served with au jus. When Grav and I had started to work together seven years ago we’d had a joke about if there was a steak on the menu I got it wherever we were, and if it was a steak joint I got the prime rib. The cut isn’t always available other places but of course Outback had it and it was just as divine as always. I love beef. I know, you couldn’t have guessed that.

Mind you, I had fleetingly thought about changing my mind and going with the new Bearnaise Crab Topped Filet, because that sounded like an irresistible combination. But, c’mon, PRIME RIB. 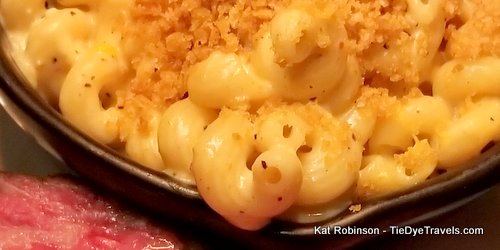 Grav stopped his bragging, though, after I let him try my side of Steakhouse Mac and Cheese. The strong and substantial tang of Gouda cheese paired with extra long macaroni noodles that spiral about along with the added crunch of breadcrumbs was over the top for him, and he decided next time that’d be his side. I was pretty impressed with it, though I usually go for the asparagus. Both are very worthy sides. 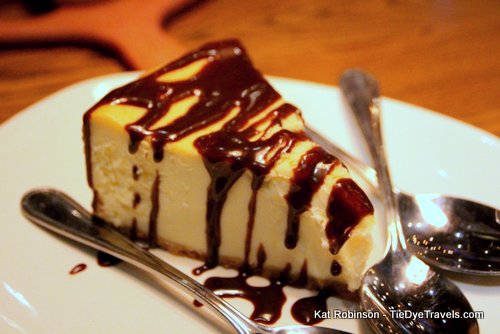 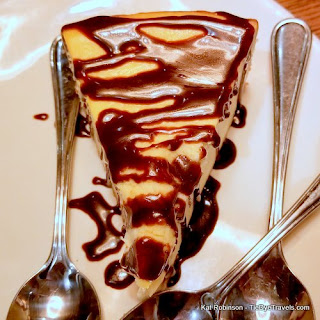 We could have easily stopped at this, but I mentioned dessert to Grav and he pointed out that cheesecake would be a lovely finish to the evening. Hunter actually turned it down because she’d eaten too much steak and Bloomin’ Onion! But Grav and I did some damage to the chunk of a slice delivered to our table, and what we could not finish we took home, presumably for his midnight snack. At least, that’s what I am suspecting, since I never saw those remnants again.

I have to admit, driving back to Little Rock after that was a slow ride. Hunter crashed in the backseat before we got out of the parking lot, and Grav even snoozed off once. It was a great, filling meal and, as Hunter muttered before sleep took her, we all went into a “beef coma.” 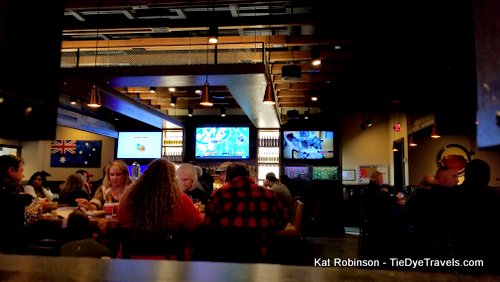 There are Outback Steakhouses all over this region of the United States, and each one of them employs a number of local individuals who make things great. This particular visit we had marvelous service from folks local to Conway, who chatted with us and who made sure we had a great dining experience. I’m looking forward to our next “beef coma.”

You’ll find this neat new outlet for Outback Steakhouse at 955 East Oak Street in Conway. If you’d like to order ahead, you can head to www.outback.com or call 501-548-6220. Oh, and there’s wifi, in case you need to check your email or catch Pokemon while you wait.