Two cities in the U.S. call themselves “Spinach Capital of the World.” One of them is Crystal City, TX. The other is Alma, AR. 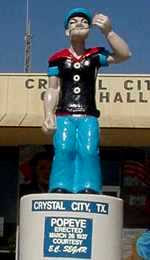 Now, I’ll give it to Crystal City. They erected a statue back in 1937 of the popular pipe-smoking sailor man, after the introduction of a Spinach Festival in their city. They have every right to the statue. Got no problem there. 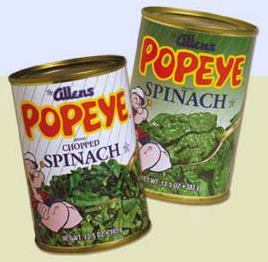 But when it comes to the Spinach Capital of the World, that has to go to Alma. The Allen Canning Company in town at one point was producing 65 percent of the world’s canned spinach.

I could go into all of this extensively, but it’s covered well on Russ Johnson’s Arkansas Travelogue page. 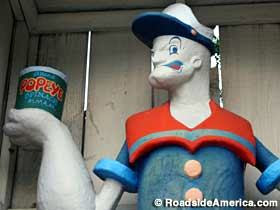 Anyway… it occurred to me recently that I have visited the old Popeye statue, the one that’s been in town since 1987... but I’ve never taken a photograph of it. Well, of course, this won’t do.

So I rolled into town on an August morning and went looking for City Hall. The little statue (okay, it’s eight feet tall, but that comparatively small for a statue) sat across from City Hall for years. 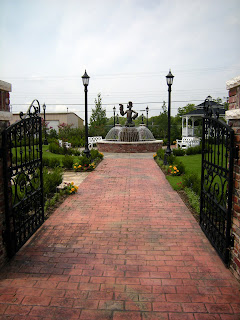 Instead, I saw the t-shirt adorned center of government, but no statue. Well, maybe I was wrong, maybe it was further down the road. So I headed a bit further along towards the high school.

And I hit the brakes when I saw the park with its big cast iron gates. I pulled in.

The imposing gates and path somehow reminded me of Graceland (though I know the driveway at Graceland is asphalt lined with bricks). Gardens lined a circle, and there were gazebos for cover. And in the center of it all, one large bronze tribute statue of Popeye in all its glory. 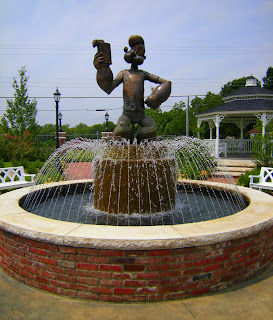 The new statue hasn’t been up long. The park itself was dedicated in April 2007, and early this year a mural was painted on an adjoining wall, dated 1871 to 2009. It’s a cute little park with little photo opportunities everywhere and even a large gazebo I could easily imagine a small band performing on, or even being used as a place for nuptials. Flowers and shrubberies have been carefully laid out for the little oasis. 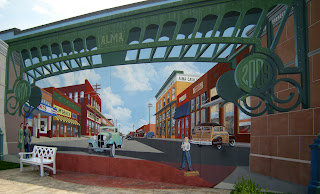 The mural depicts a composite of Fayetteville Avenue over the years -- with Murphy’s Café, Starbird’s Variety Store, Bowlin’s Grocery and Gayles Electric, E.L. McGehee’s and the Alma Cash Store. The view down Fayetteville Avenue is much different now. Most of the businesses have moved closer to the interstate, though the Allens Inc. (the name just recently changed from Allen Canning Company) is still hulking on the other side of the railroad tracks. Perhaps the little attraction will draw more business in and help revitalize the area. 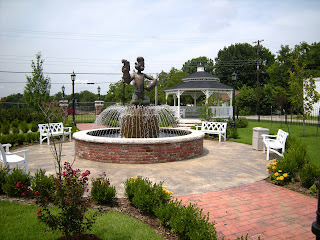 In case you were wondering, yes, Alma is home of an Arkansas food festival. The Spinach Festival is held the third weekend of April each year, and there are contests there such as the Lil’ Mr & Miss Swee’ Pea Pageant.

Of course, we’re all guilty of screwing up now and again. And I screwed up on this assignment. Because I forgot to take a photo of the water tower. Fortunately, others have… so you know what the World’s Largest Spinach Can looks like. Except it’s full of water. Yeah, something like that.

You’ll find the statue of Popeye in Alma. From Interstate 40, head south on Highway 162. It winds first to the left at the fork south of Highway 64, then right just before the canning plant. Cross the railroad tracks, and the park is just down a couple of blocks on the right. If you get to the high school, you’ve gone too far. 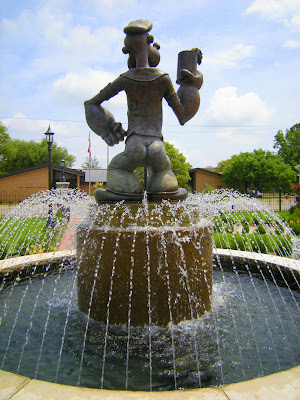