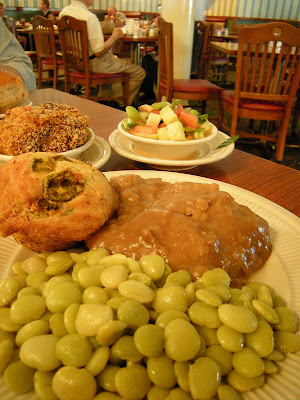 Arkansas’ oldest same-family-owned restaurant isn’t a barbecue shack, or a hamburger joint, or even a steak place. It’s a cafeteria. 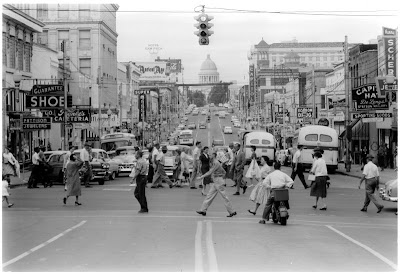 Franke’s didn’t start out as a cafeteria. It was first a bakery, sort of a hole in the wall joint that served up doughnuts and such downtown in 1919 by C.A. Franke. Five years later, the first cafeteria under the name was opened at what’s now Capitol between Main and Louisiana.

There were (and still are) other locations. The one I remember from my youth was in University Mall next to Osco Drug, across from Montgomery Ward’s. It was there from before I was born until right before the Mall was sold off and demolished. I can remember standing in the Nut Hut and looking across through the windows at all the diners in the fancy wood-paneled-and-curtained dining room, thinking how fancy everyone was. 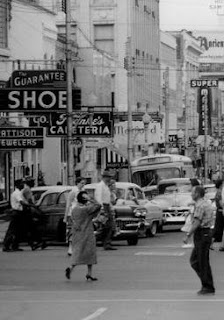 There is still a location downstairs in the Regions bank building… during the times in my life where I worked temp jobs to supplement my fledgling radio career I’d grab my tray and join the masses, picking up roast beef and peas and egg custard pie to consume before returning to the dredgery of my day.

These days, though, there’s no University Mall, and I tend to haunt West Little Rock more than downtown. Which is fine, since there’s a Franke’s on Rodney Parham in the Market Street Shopping Center. From the exterior, it’s unimposing; inside, it’s well-appointed and clean, just as fancy if not fancier than most of your mid-range restaurants. And best of all, it’s reverently quiet. 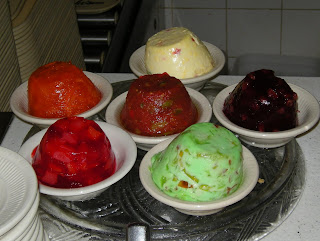 It’s still a cafeteria -- not a buffet. You head to the end of the line, grab a tray and cloth-wrapped utensils, and choose the dishes you would like with the help of smartly attired attendants. And there’s all sorts of foods. In the salad section alone you could get lost without a guide. Sure, there’s the traditional restaurant-style lettuce and cucumber and tomato salad with dressing you can order up; there are also a plethora of Arkansas-friendly salads, too -- like carrot salad, marinated salad with onions and tomatoes and cucumbers (strangely similar to Indian Kachumber salad, but I digress), blackeye pea and pepper salad, Ambrosia salad, green bean salad, pea salad… and at least six types of congealed salad. There are beets and peaches and okra of varying sorts. 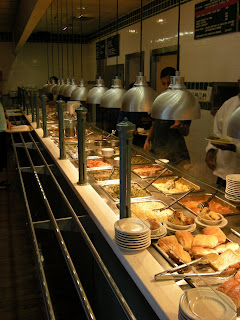 Entrées vary by the day, but there’s usually always roast beef and ham and fried chicken and roasted chicken and hamburger steak. I’ve seen chicken croquettes and baked catfish and fried catfish and pepper steak with onions and cabbage rolls and pork chops. More sides than you can shake a stick at -- cabbage with ham, green beans with bacon, corn in oh so many preparations, rice, mashed potatoes, fried potatoes, umpteen types of beans and peas, carrots, mac and cheese… and if you’re really lucky, sweet potato casserole. Or even better, eggplant casserole. There are white bread rolls and wheat bread rolls and regular cornbread and Jalapeno cornbread full of corn and pepper bits.

And then there’s pie. The one thing that about 95 percent of all Arkansas restaurants I have visited have is some variation on pie -- fried, meringue, cream, berry, whatever. Franke’s has more pie than you can shake a spoon at, more than you can eat in a week, more than you can conceive of in a sweet luscious dream. 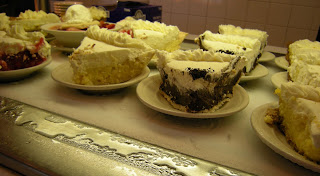 There’s pecan and sweet potato and sometimes pumpkin and egg custard (which is famous) and lemon meringue and brownie pie and that’s just some of the hot ones. There’s banana cream, chocolate cream, lemon cream, coconut cream, cinnamon cream, strawberries and cream, and heaven knows what other types of cream. And cobbler.

Dropped by the other day with a couple of traveling companions who’d never been. I believe they were expecting something closer to the retail buffet experience. Instead, we sat down after choosing what we wanted and watching it be plated up for us… and enjoyed one heck of a fine dinner. 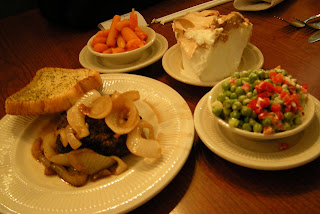 One chose the hamburger steak with onions, with a hearty slice of Texas toast and carrots that weren’t too mushy and some of that cool pea and pimento salad. The other went for a roasted and herbed chicken leg quarter with mac and cheese and a wheat roll and a traditional salad. 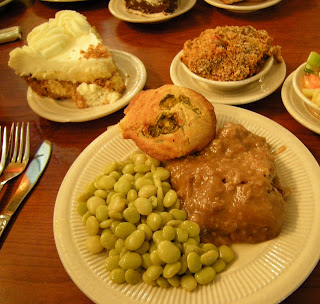 I went for what I consider to be real Arkansas home cookin’ -- smothered hamburger steak, butter-baked Lima beans (too bad they didn’t have any butter beans or purplehull peas that day), Jalapeno cornbread, eggplant casserole and marinated salad. Way too much to eat, but just a jaunt down memory lane. Any bit of that meal coulda been served up to me by either side of my southwest Arkansas family years ago. This is the sort of food that I was raised on.

Of course we had dessert. One companion’s lemon meringue pie was a beautiful homemade construction with a huge head of meringue that blended well with the baked lemon custard below. I get so nervous sometimes when I see the day-glow yellow lemon filling in meringues at places; to see it here, a gorgeous egg-yolk yellow with savor and heft and not that overbearing-oh-dear-Lord sweetness is comforting. 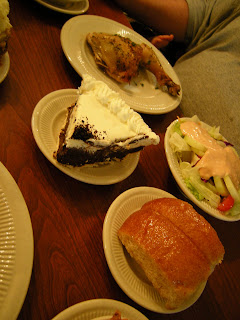 My other companion didn’t even bother to offer me a taste of his custardy-rich chocolate cream pie, go figure.

I shouldn’t complain. I went for one of the house favorites, not the egg custard but the cinnamon cream pie, layers of ever-richer cream and custard on top of a loose brown sugar and crumb crust. The top layer is almost completely beaten cream with a touch of cinnamon, but each layer below more custard is folded in. Rich as all heck, too -- and begging for a cup of hot coffee.

And that’s the thing at Franke’s -- service doesn’t end when you pass through the register section at the end of the tray line. A porter will come take your tray as soon as you sit down, so you’re not left trying to find a place for it on your table. They’ll even carry your tray for you if your hands are full or if you need help. A kind waiter will drive a cart by every once in a while with refills on coffee and tea and take-home boxes. Other waiters will check on your soft drink. And there is no rush. Take your time. Enjoy your conversation. You can pay up when you leave.

There is one disappointing thing to me… I took my daughter with us, and if you don’t count her I was easily the youngest person in the restaurant the afternoon we went. I don’t know why there weren’t more members of my generation there -- I hope it was just a fluke. But I’d hate to see something happen to this 90 year old local restaurant franchise, especially if folks stop coming. They don’t know what they’re missing.
Told by Kat Robinson at 10:53:00 AM