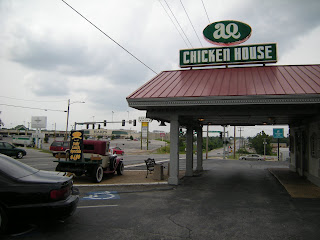 I tend to get a lot of unsolicited suggestions when I go places… mostly from friends, and sometimes just from folks who recognize me and know what I do. One of those recommendations I’ve received from several quarters is a request to check out the AQ Chicken House in Springdale. 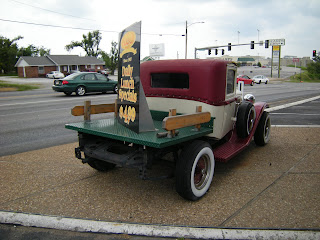 Now… the name itself seems to be that of a country restaurant. I would expect to see white walls, checkered tablecloths, and a walk-up window. That’s completely not the impression I got when I drove up on an August afternoon. In fact, I was surprised by how pretty and refined the restaurant appeared. I was charmed by the little truck out front advertizing specials, and by the general Victorian décor. 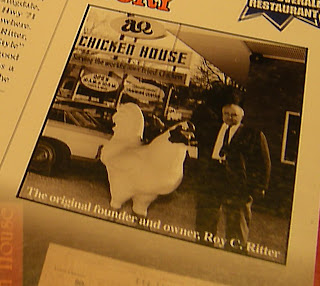 The first AQ Chicken House opened in Springdale back in 1947 (there’s a second one in Fayetteville)… the brainstorm of Roy Ritter, who sold Southern Fried Chicken to the masses (or really, the dribs and drabs) that found their way up Highway 71’s two lane dustiness. Placemats and the restaurant’s website proudly proclaim that you could once pick up a half chicken dinner for 65 cents, and coffee was a nickle. 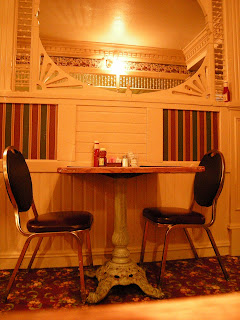 There are also pointed references to all the things that AQ predates -- like Wal-Mart and Frank Broyles.

AQ, by the way, stands for Arkansas Quality.

There are a whole lot of options on the menu, by the way, this very hefty menu with everything from AQ Pickle-Os (fried pickles) to barbecue to salads to catfish to spaghetti and at least a dozen types of prepared chicken. There’s Hawaiian Chicken -- teriyaki style served over rice with pineapple rings. There’s Parmesan Chicken, smothered in marinara sauce and served over spaghetti. There’s Southwest Chicken -- cut into fajita strips and seasoned with lime before being covered with roasted onions and peppers and cheese. There’s Chicken Alfredo and Chicken ‘n’ Dumplings and Chicken Fried Chicken smothered in gravy. There’s Cajun Chicken Breast and a Charbroiled Buttercrust Chicken Breast and AQ Chicken Livers and Chicken Tenders and Fire Roasted Lite Chicken.

I went for the best option I could figure out -- the Chicken Sampler Platter ($8.79), which comes with three pieces of chicken -- 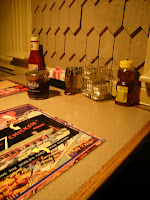 one Original AQ Pan Fried Chicken, one Chicken Over The Coals, and one Sweet N’ Smokey BBQ Chicken. I figured I couldn’t go wrong.

My waitress brought out a basket with a huge, soft cloverleaf roll while I waited. The cloverleaf rolls have been around as long as the chicken has. I enjoyed the soft, somewhat wheaty roll with the offered butter. I even tried some of the items on the table -- the Webster’s Strawberry Preserves and the pure honey. Think I liked the honey the best. 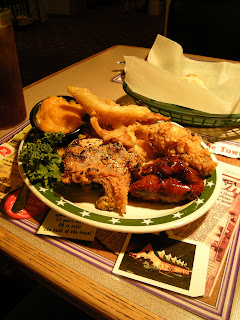 Out came my platter, a fried feast of epic proportions. My hungry butt was ready for it. I first sampled the Chicken Over The Coals breast, and found it to be somewhat salty and full of lemon pepper and smoke flavor. I can see why some of the recommendations I had were for this particular indulgence. The chicken was rich and full of flavor… so much flavor, it needed some of that roll to cut it down a bit. But still good.

I have to say, I wasn’t quite as taken with the barbeque offering. The wing was apparently fried first and then soaked in the tart and tangy sauce, similar to a Buffalo wing sauce. Good, though. I did have trouble keeping it together long enough to get it to my mouth; the combination of slick sauce and fall-off-the-bone meat almost made it a fork-worthy effort. As it was, when my waitress saw me tackling the wing, she brought me hand wipes to clean up with. 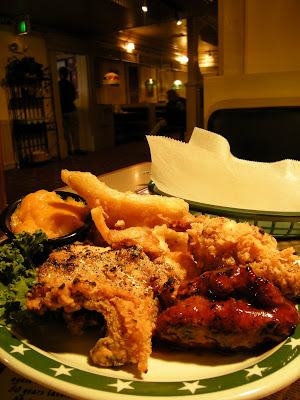 The pan fried Original leg, by the way, was probably the best fried chicken I ever put in my mouth. It was juicy without being greasy, with this light crust you get from skillet frying instead of deep frying, and it made me wish I’d gone with my friend Dave’s suggestion and just ordered the Original dinner. Well, you live, you learn, and if I hadn’t ordered the sampler platter I would have kicked myself repeatedly over curiosity.

I’d chosen the sweet potato casserole and the batter French fries as my side items. The sweet potato casserole was surprising -- a puree of what tasted like sweet potatoes, orange juice, and perhaps a little honey. No nuts like at many other places. It was light and very sweet.
The fries? I have to go back for the fries. They were seasoned and battered just like onion rings, except they’re straight and filled with potato. And they were SO good. I could have made a meal out of them alone. Very good. Very, very good. 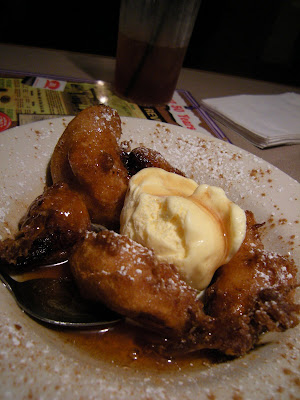 Well, that really was enough for lunch, but knowing how rarely I’ve made it up to Northwest Arkansas lately, I couldn’t pass up dessert. And how could I miss something so curious as Fried Peaches? They run $3.49 for an order for one or two people or $5.99 for three to four. I was warned that it would probably be 15 minutes to make them up. That was AOK with me… time to let my dinner settle. 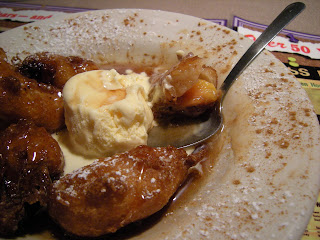 But when they came out, I was plenty pleased. And I can offer you this advice: get coffee with the peaches. They need the balance. The cling peach slices are each wrapped in a biscuit type batter, then deep fried for crispiness and then drizzled with what tastes like a peach syrup and cinnamon reduction, rich enough to be liqueur. Completely overwhelms the scoop of vanilla served up with it.

Even the lightness of the biscuit crust fails to deny the richness of this dish. Share with someone for Pete’s sake (preferably me).

They were plenty good. I can certainly say that. 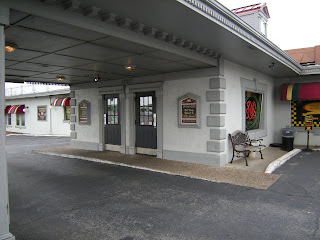 I want to go back again, just to try more on the menu. But I am going to have to bring folks with me. As it was, I had to take more than half of my peach order and half my fries home in a box… this isn’t diet food, you know. I want to try their version of Chicken Fried Steak, the brisket and definitely the Chicken ‘n’ Dumplings. Maybe next time I get up that way. Shouldn’t be too long.

You’ll find the AQ Chicken House in Springdale on Highway 71 (Thompson Avenue) north of Highway 412. They do a lunch special each day until 2pm for $4.99, but the prices are reasonable enough you can swing dinner, too. And for Hog fans, the one in Fayetteville is on North College. Lots more information on the restaurant’s website.