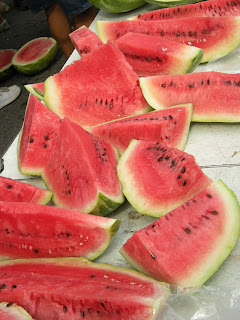 A perfect little break in the summertime heat... made better by a taste of heaven. That's my impression of the Cave City Watermelon Festival, the big annual event celebrating the World’s Sweetest Watermelons the second weekend of August.

I’ve gone many times. The first time, it was to try out those sweet watermelons on their own ground. I’ve returned again and again to enjoy the atmosphere; the laid-back late summer soiree in Cave City Park where folks take their time and all the watermelon you can eat is free. I actually toyed with the idea of skipping last year's festival, worried that the heat would be too much for a (then) five month pregnant chick to handle… but the night before the big event the heat broke, and instead of 100+ degree temperatures in the shade the thermometer bobbed along in the 80s.

When I arrived and parked, the car show was in full swing -- teenagers who’d fixed up their family cars sharing the exhibit space with professionals and weekend garage monkeys. As I made my way towards the center of the park, I noticed children clambering over the playground as parents watched from a distance, chattering among themselves. Older gentlemen were sharing stories over the tractor display -- some tractors out-aging even the octogenarians in the crowd. The wind kicked up a little, and there was an almost felt sigh from attendees who welcomed the movement. 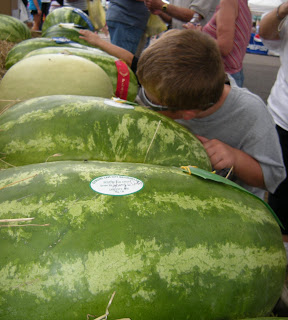 At the festival pavilion, attendees were handed a Dollar General bag that contained a couple of pens and a Mardi Gras beaded necklace with a big Cave City Watermelon Festival medallion. There was also a program, sharing what was coming up in the afternoon. The sacks, I came to find later, were for those watermelon rinds... a good idea, for sure.

The crowd was starting to thin out a bit, as many of the festival-goers took off for lunch. Some headed on foot down to Sonic, a few blocks away and a major sponsor for the event. Others headed back to their cars to grab a bite of lunch from coolers and picnic baskets. And some brought money to eat on site. Several of the local churches were offering cheap eats -- like the $2.75 burger at the Free Will Baptist Church stand. Drinks went for $1 for bottled water and 75 cents for soda. 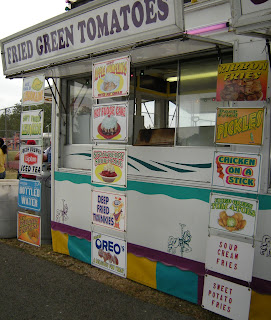 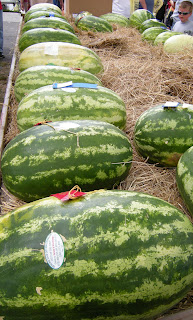 A steady stream of visitors passed by the wagon bearing the winners of the watermelon growing contests. Big, healthy, shiny melons of varying colors bore familiar names --Penn, Patterson, Wooldridge, Perkey. There are six families that continue the watermelon growing tradition around here, and it's always a tight battle to see who can bring home the ribbons in any given year.

I wandered on and checked out the stands. Vendors were selling jewelry, t-shirts, toys, sunglasses, bags -- all sorts of things. These were mostly small business people from the area. Up towards the gate at the northeast corner, members of the Cruisadors (a chapter of the Arkansas Baptist Bikers Association) were handing out water to the thirsty for free.

I stopped by one of the bank booths (there were three) and picked up a welcomed fan. While the air was much nicer than previously expected, a good fan helped move the air a bit more. 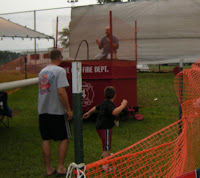 Across the park, the fire department had sat up a dunking booth. The guy in the booth was trading jabs with a guy who hadn't been able to sink him on six successive throws. A family came up, paid for their balls, and a young boy started his aim from the youngster's line. He threw two balls in rapid succession -- and down went the victim into the drink. He came up from the water laughing, apparently pleased at the dunking, and congratulated the young man. 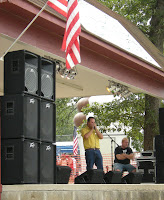 The crowd was growing under the trees, as families brought out their chairs and set up for the day. The Gaylon Sandefur Band broke into their popular song, "Chicken Truck on Highway 25." That one drew quite a few chuckles.

There aren't really any bad seats out on the lawn -- the park is set out well, with the bandstand placed on the edge of the natural bowl. The wind lolled through the crowd, bringing with it the ruffle of the air sock from the Sno-Cone concession, the scent of syrup and funnel cakes and fried onions, and the dull roar of a hundred different conversations. People would come out, set up their chairs and coolers, and then walk off -- completely unconcerned about whether someone might come along and disturb their possessions. There's a sense of trust that's assumed and sacred at these small-town festivals, and I am thankful for it.

There was a pause in the music, as James Mack Street took the stage for the quilt raffle. As the quilt was brought out for display, the audio guy played a pre-recorded announcement, thanking the sponsors for the event. And they do deserve that thanks -- unlike many other festivals, the Cave City Watermelon Festival is entirely free. The parking is free, the car show is free, the concerts and the contests and everything else -- everything, that is, except the vendor's wares -- but that's to be expected, these people have to make a living, after all.

I decided to wander around and catch a little more of the action. And I noticed that the refrigerated truck had arrived. I wandered up and joined the small crowd of people who were trading comments with the guys and boys gathered at the back.
Four o'clock was approaching, and the growers decided it was a good time to go ahead and open up. The crowd could feel the rush of cold air as the door was hauled open. Tables were set up in a "U" shape and accoutrements like plastic forks and table salt were set out.

The line was already forming, people anticipating the cool bounty about to be laid out. But there was no real rush. People continued their conversations. Some parents carried babies and toddlers on their hips or shoulders. Stories were shared. 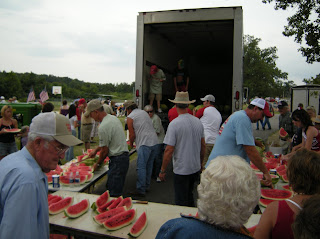 Without much ado, one of the growers turned around and motioned at the boys who'd crawled up inside the truck. The boys started handing out melon after melon in a pass-line to the growers at the front. Three or four of them pulled out big clean knives and took to splitting the melons up quickly and efficiently in all sorts of sizes. 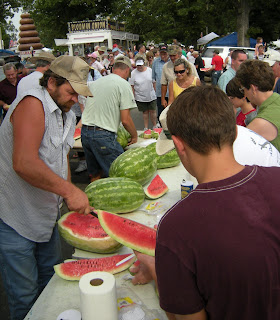 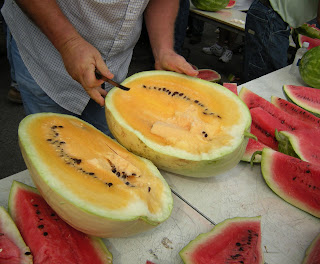 There was a stir to one side, where the first of the yellow melons had been popped open. The sweet aroma of melon was pervasive, but not too strong -- after all, this is watermelon we're talking about. The line moved steadily and swiftly, as people came up and grabbed their slice and went back to sit down and consume theirs. Some folks propped themselves up next to the nearby tractors to take in their share and be ready to come back for more. 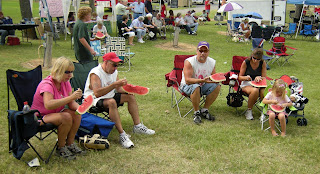 I gratefully took a crescent-shaped slice of the yellow melon and wandered back through the line on my way to my seat. A couple of the guys were joshing with a boy who was wandering back to the concert field with three giant slices all by himself. The band had even sat down to enjoy melon themselves. 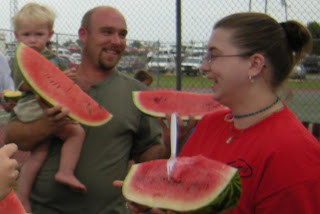 There was a strange calmness, a feeling of fraternity out there on the field -- with the quiet sounds of munching and slurping and what-have-you. There were people sitting at pavilion tables carefully exhuming seeds with spoons, and a whole family munching and spitting the seeds a bit further down the way. 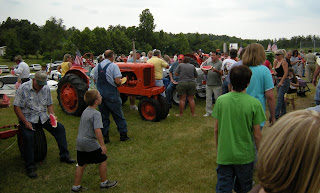 Me? I'm a flicker. I sat down in my chair, put my slice on my lap, and used my fork to flick away the seeds on the outside. You can spot festival veterans -- they’re the ones that bring wetted down washcloths in zip-top bags and paper bags for their laps.

All this watermelon -- and it's a lot of watermelon, dozens and dozens of the best of the crop -- is donated by the growers. All of it. Not a dime changes hands. They all work together, and get their selections up on the refrigerated truck. As far as I know, there's never been a watermelon-less festival, and if it keeps up this way there never will be.

Mr. Street got up on stage again to remind everyone to bring their rinds to the truck behind the bandstand and not throw them in the trashcans -- since 55 gallon drums of melon rinds would be far too heavy for the sanitation folks to handle. I had eaten my melon down to the rind, and couldn't resist tucking my fork behind my ear and going back for another slice. The back of the “rind truck” was already a third of the way full by the time I tossed in my contribution and headed back up to the line. 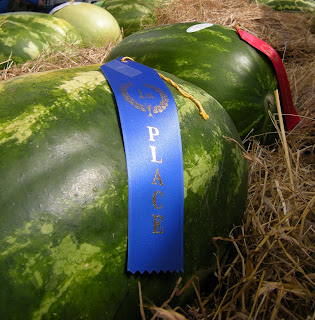 I'd been about 120 yards back when I joined the line, but less than five minutes later I was back at the front, and I picked up another colossal slice before heading back to my seat. I watched the melon auction as I enjoyed the second slice. The top melon went for $250, while others went way over the $100 mark. All the money raised went to Arkansas Children’s Hospital. 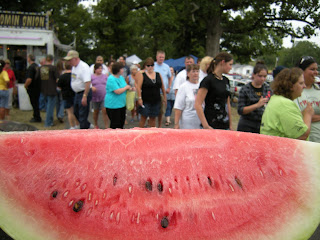 By this point, I was satisfied and rather saturated, too. The red melon I'd consumed as my second slice had not only been sweeter, it had been juicier, and my shorts were soaked with melon juice. It didn't matter. The breeze joined the moisture to bathe me in Mother Nature's air conditioning, and I was feeling fine.

I decided to take off shortly thereafter, having a two hour drive to make back to Little Rock. As I wandered past the refrigerated truck one more time, I noticed a couple of the growers in deep conversation with others. One young man was asking 20 questions about how to grow melons, and how to make them sweet. I overheard the response -- "it ain't hard if you live up here." 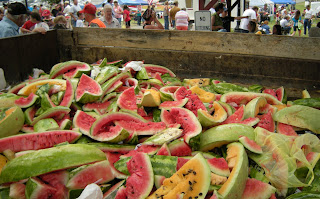 The tables and the ground beneath were strewn with seeds and a few wayward slices that had slipped from grasp. Further on, the playground was full of happy, sticky children, playing under overcast skies.

If you find yourself with a couple of free hours this weekend, it would do you good to head up to Cave City. Pick yourself up a couple of melons -- take one home, take one to your friends to share. But don't wait too long -- watermelon season doesn't last forever.
To purchase this article, email Kat Robinson at 8/05/2009 05:24:00 PM