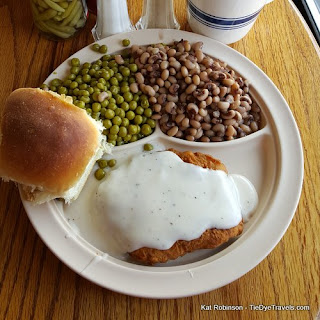 There’s something to be said about comfort food… something that draws in lines of folks that stretch around a packed restaurant before noon on a weekday. That’s what I found when I dropped by Bobby’s Country Cooking Friday -- a line that was backed up to the door at 11am.

There’s no set menu there… just four entrée items, a selection of sides, drinks and a case full of homemade pies. But that’s apparently enough to draw folks in. More on the jump. 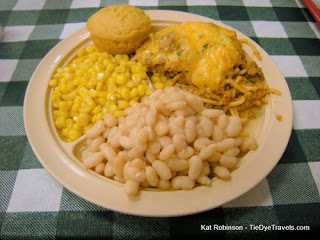 Friday’s specials included fried chicken, catfish, chicken fried steak, and hamburger spaghetti bake. I went for the latter, pairing up my choices with cornbread, white beans, and corn. The cornbread muffin was sweet, and the spaghetti was very much like what I’d expect if I was eating at someone’s house for dinner -- a very casual dinner. Hunter tried to eat her weight in the white beans. Thank goodness for ample portions. 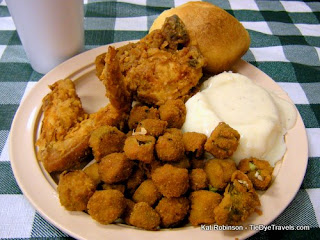 The hubster went for the fried chicken, paired with mashed potatoes and gravy, a white roll, and fried okra. He says the okra was on the salty side, but what I sampled didn’t seem salty at all. The chicken wasn’t all that greasy, with a good flour batter and lots of taste to the meat.

“Meat and Two Veg” runs $7.25 for any combination, and iced tea is $1.50. Tax is figured into the price, so you’re not going to walk out with a lot of pennies. And those pies? Gotta tell you about the pies. 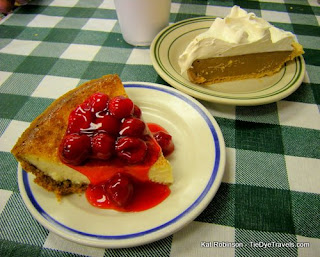 When we were picking up our plates, we eyed the pie case. All the pies are homemade, and it shows. Choices included peanut butter pie, mint chocolate pie, coconut cream pie, lemon ice box pie, and pecan pie. We went for a slice of chocolate cream pie and a chunk of cheesecake with cherry topping. Sure, the cherry topping was cherry pie filling, but the cheesecake was obviously homemade and had real substance to it. The chocolate pie was cool, creamy, and apparently pudding based. Good, though. Pie, by the way, is $2.25.

When we left, the line was actually out the door and onto the sidewalk. That should tell you something. You’ll find Bobby’s Country Cooking in the big orange shopping center at Markham and Shackleford. (501) 224-9500 -- lunch only. Check out the website for daily specials.