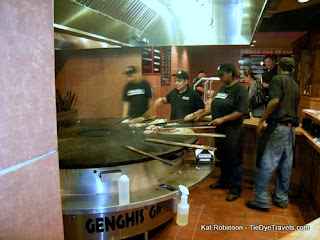 I have tried really hard to like Genghis Grill. I mean, if you look at the concept, it seems pretty neat… you can have a bowl of just about anything you like for a flat rate -- as much as will fit into the bowl. There’s a large variety of meats, sauces, vegetables, starches… a whole lot of variety there.

So I’ve tried… but so far, I’m just not that thrilled. First couple of times we tried to go, we were turned off by a 40 minute wait. The place was packed, I’ll give you that. We finally snuck in with friends on an early afternoon to give it a shot. 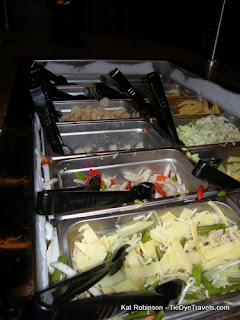 And it seemed reasonable enough. For $11.99, you go through, take one bowl, and put everything in it. You start out with meats -- chicken, pork, beef, "Krab," shrimp, scallops. You add vegetables if you want. And crunchy stuff like water chestnuts and bamboo shoots. You can add a spice blend to it. You add a sauce to it (everything from a Thai Peanut Curry sauce to barbecue) and then you hand your bowl over to one of the grill folks and they add the starch you ask for (like udon noodles or rice) and go to work grilling up the whole mess together. And that’s it. For one price, you’ve bought one bowl of food. For three 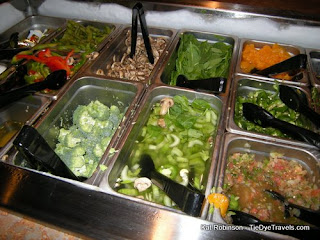 dollars more, you can have as many bowls as you like.  You can watch how it's done at the company website.

Now, Crazy Hibachi Company does the same thing. They don’t have as wide a variety of spices and sauces, I’ll give them that, but Crazy Hibachi also has a menu and a sushi bar and, well, more options. All I saw at Genghis Grill was the one bowl. Not even a kid’s offering -- though I could be wrong. I didn’t ask, my bad. 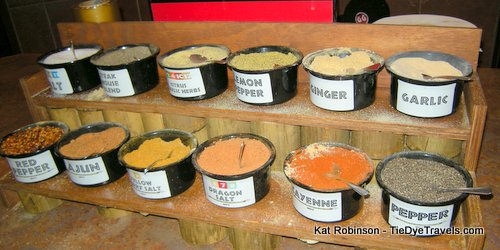 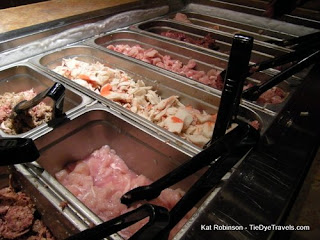 I guess what’s bothering me about it is the whole cross-contamination issue. For someone like me with a food allergy, it’s a scary idea to go up and trust that the 12 year old in line in front of you hasn’t used the same tongs on the seafood and pork that he did on the chicken and beef. And yes, I did watch the big grill get cleaned a couple of times, but still -- someone with a peanut allergy would probably still have an issue.

The food’s not bad -- it’s what you make it. If you want something specific, they do have helper cards that show you how to make the dish you’re wanting. 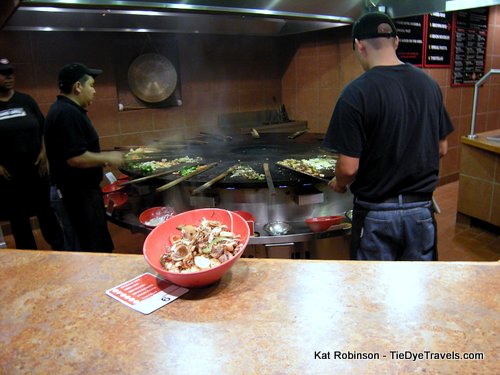 I suppose the other thing that bothers me is what bothers me about all “Mongolian” restaurants… my historical research into food makes me cringe at the thought of mare’s milk and tartare steak tenderized under a saddle. Once again, that’s probably just me.