Sam Choy's A Rather Nice Fellow.

Sam Choy is a nice guy. Got to meet the chef this morning at Pulaski Technical College’s south campus. He came in to talk with the culinary students, and boy did he have a lot to say. 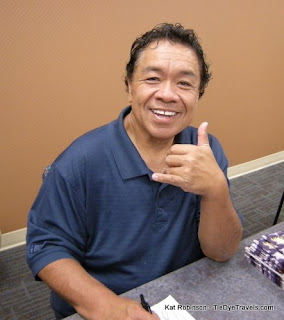 You may have seen Chef Choy on Iron Chef America. He has a cooking show in Hawaii that’s run 18 years and he’s pals with Emeril Lagasse and Paul Prudhomme. He’s cooked for Oprah Winfrey, Celine Dion, and the Lakers… but I tell you what, he’s just this downhome guy. Just a nice fellow. And in case you were wondering, yes, he’s half the man he used to be.

Choy had a lot to share with the students at PTC’s Culinary School. His biggest thing was that students need to know what they’re getting into, and commit to it.

“It’s a lot of hard work. You see Wolfgang Puck and Emeril Lagasse and those others and it looks glamorous, but there are a lot of dark moments,” Choy says. He told the group of young chefs about his first job, where he was hired on as a “cook’s helper” and found out that meant he’d be washing dishes, and how his mom set him straight and tild him that’s exactly what he needed. He shared how after two years as a pot washer he got his chance when the breakfast cook broke his leg in a motorcycle accident. Choy didn’t pull any punches in his tales, telling it like it is with all the rough edges.

But he also encouraged the kids to stick with it. “When you find your niche, find your connection, no one is going to stop you,” he told them. “You look at the Food Network guys, they’ve had some very very dark moments. But they got cooking. You gotta love it, if you do, it puts those on the back burner. If you don’t, go learn how to play the piano or something.”

Choy says the best thing a chef can learn is how to use a knife. “A good knife is a very sharp knife. It’s your tool. It makes it happen. You don’t go to the store and buy a bag of zucchini and have them Julienne cut it for you. Don’t be afraid of it -- a sharp knife is a happy knife. You gotta cut with it. That’s where it all starts. You learn to cut vegetables, you got it easy.”

Choy at his zenith weighed over 400 pounds. Three and a half years ago, his doctor told him he feared he’d soon be filling out a death certificate for the chef. Choy hired a trainer, hit the gym, and started watching his intake. “It’s been a commitment,” he says. 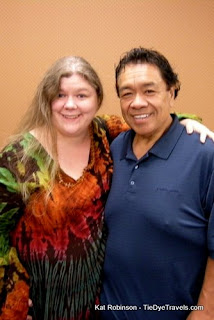 But it hasn’t diminished his love of what he does. “It feels good when people like your food. You guys gotta be sponges. There’s no easy way out. At the end of it -- there’s no end -- but when you build your foundation then you have fun.”

And his best advice to young chefs?

“Our taste buds have to be trained. You gotta taste. Cooks aren’t feeling the food, feeling the love these days. The young generation does not taste. They’re used to fast food. It’s our human nature -- we have to learn to taste.”