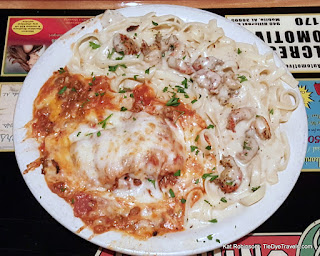 There are many rules you should follow when you're dining out.  Some are practical (don't go to a restaurant after closing time and expect to be served), some are sadly humorous (always wash your hands after eating peppers), but some are just ironclad things you should know.  Three of those cardinal rules:  follow your nose, choose new things, and don't argue with the chef.

All three of those things apply at Gambino Brothers on the western side of Mobile, Alabama, along with a fourth -- when you can, dine with friends.

Grav and I are on our way to the Alabama Gulf Coast for an assignment.  We decided we'd do most of the driving on one day and then tackle all the really cool things the rest of the trip.  This is good advice if you have a long drive to your vacation destination.

However, we arrived in the evening, and as tired and grumpy as we were after the eight hour trip, we decided to play a little restaurant roulette, randomly turning here and there until we saw something we liked.  This time around, we almost dined at a place called Pour Baby -- mostly for the crazy sign out front -- before looking at the menu and realizing there was something I was allergic to in every item on the menu except the steak.  And they were out of steak.  We passed a place called Montego's, went through a shopping center and almost ended up at a Thai place. 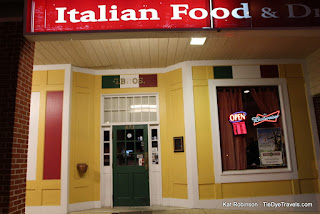 And then we spotted the somewhat dimly lit exterior of an Italian restaurant.  We hadn't set out to have Italian, but what the heck. 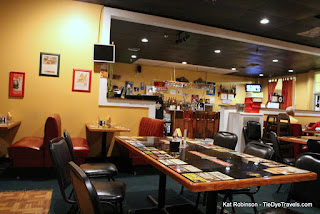 momentarily that we'd be shooed away with a "the kitchen is closed" remark (this has happened more times than I have acknowledged) but instead a gentleman came out of the kitchen and asked us to sit wherever we liked. Grav pointed at a six-top but I mentioned since there was just two of 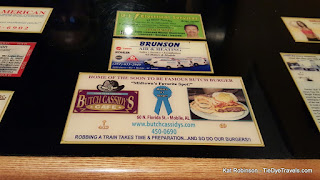 us, we should get a booth.

The first thing I noticed when we sat was that the ad-covered tables included, front and center where I was, an ad for a burger joint.  Either this place had been around a long time, or they were comfortable sharing local recommendations.  That was cool.

The same gentleman came to our table with menus and wandered away to check on the other guests.  The couple at one of the two other occupied tables were getting ready to leave.  I heard compliments.  That was pretty cool.

The menu is pretty standard Italian -- pasta, pizza, salad.  Where it differs is in application.  Grav and I both contemplated the crawfish pizza with alfredo sauce (we'd find out later) but once I asked about the meat sauce (beef and pork), I turned my thoughts to lasagna.  Usually it'll be pork-tastic, but Gambino Brothers offers four different versions -- the Brothers Lasagna with meat, ricotta and marinara sauce layered between pasta noodles; the Vegetable Lasagna with vegetable medley, ricotta and mozzarella; the Eggplant Lasagna, which substitutes slices of eggplant for the pasta, and the Spinach Lasagna. I ordered the Vegetable Lasagna and Grav got the Lasagna and Crawfish Alfredo combo.  We decided against salads.  It was late.

Our came out and in his thick, quick, tight Italian restaurant accent he told me the.vegetable lasagna was gone.

"How bout the spinach lasagna?"

"Do you have the eggplant lasagna?"

Grav started to say "the problem is, she's all-" and then realized what he was saying and stopped.

Our waiter looked at me and said "there's eggplant in the spinach. There's no spinach in the eggplant." 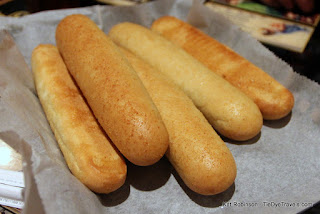 "That sounds good. Spinach it is."

"You wan' mari-nare or alfredo?"

"Which would you choose?"

He stopped. I think he was surprised I asked. 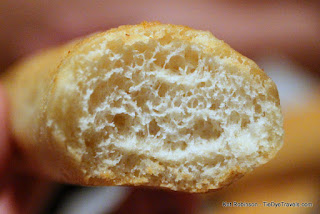 "Then alfredo it is!"

He skuttled off to the kitchen, to return moments later with fresh, hot breadsticks... crispy on the outside, somewhat salty.  They were nice and airy and I could have eaten a basketful.  Grav 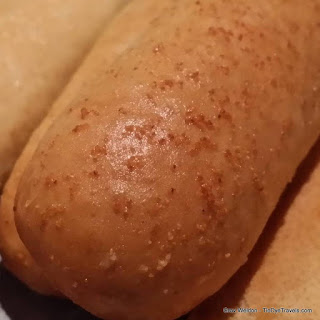 and I both stopped at one, knowing dinner was on its way.

And then this happened. 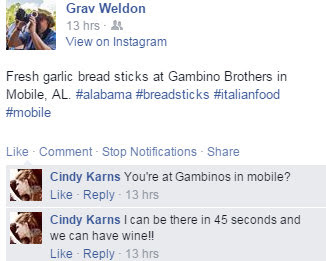 Grav at first started panicking, having read the message wrong and thinking someone was going to show up at the house (which would certainly startle the housesitter) in Little Rock. 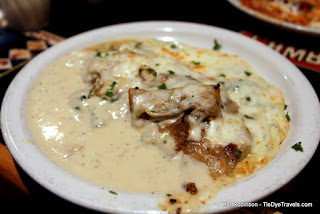 Our plates showed up about this time.  I believe the gentleman who'd been waiting on us was amused by our camera antics.  Me?  I managed not to take all my normal photos, since I was incredibly hungry and here was this amazing smelling plate in front of me.  We did our usual dance of taking 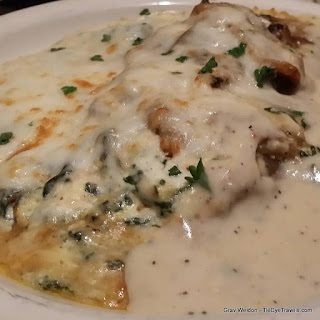 photos with cameras and phones.  I finished first, and our waiter looked at me, looked at my pasta and asked "you need something more?  Maybe another plateful?"

"I think this is going to be plenty!"

This brought me down into giggles, and as he wandered away, I looked at Grav and stuck a fork in my dish.  "I hope you already got this."

"I did," he sighed, training his Samsung Note on the meat lasagna on his plate.

I took a bite.  Well, damn.  That was extraordinary.

No, really, I mean, it was... okay, it may have looked like a huge white mass on a plate, but it was layers and layers of alternating spinach leaves and thin eggplant slices, lightly seasoned and glued together by ricotta and mozzarella cheese, under a thick blanket of alfredo sauce and more cheese.  For a meatless dish, it was very hearty.  It probably did unspeakable things to my cholesterol, but I didn't care.  It was just dumbfoundingly good.

I had Grav try some before he dug into his own plate... and he agreed.  I believe his word was magnificent. 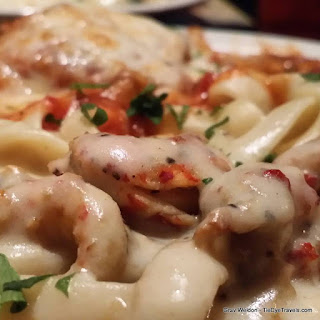 I tried a bit of his crawfish alfredo dish... and was thrilled with that, too, lightly seasoned and grilled crawfish with that same alfredo sauce on thick noodles.  But I liked mine better.

He tried the same, was overjoyed with nicely done crawfish, and then sampled the meat lasagna.  Then he looked at me, pointed with his fork for emphasis at my dish, and said "that's magnificent." 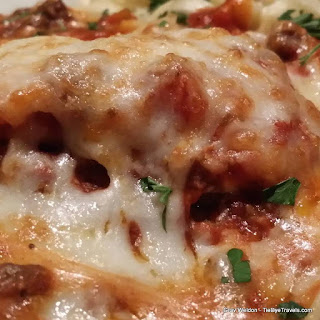 Then he pointed at his own, and said "but this is better."

His phone started to ping.  He checked his messages and looked up.

"Our friends... are coming to join us here.  Just a few seconds away." 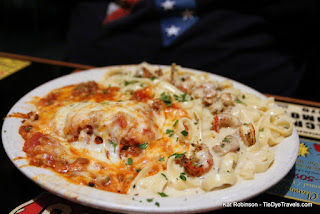 of our friends came through the door.  And merriment happened.  After hugs were exchanged all around, we ended up moving to the six-top Grav had originally aimed for, and conversation rolled around for a while.

I knew it was getting close 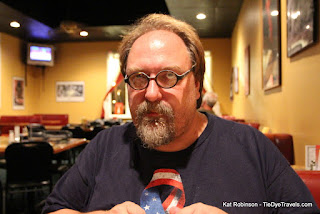 to nine, or maybe a bit afterward. But no one was shooed away.  Instead, the guy who was waiting on us started pointing at our new guests, asking them for beverage orders.  One of the ladies with us asked what I was having and ordered it, along with a salad. She was asked what sort of dressing she wanted.

The gentleman waiting on us looked at her and said "what kind of restaurant are you in?" 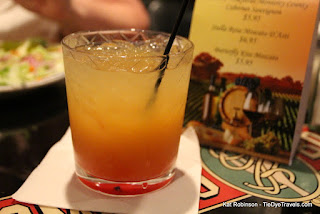 We all laughed.  She also ordered a pineapple martini, which I photographed.  The other lady that joined us ordered wine and, when the gentleman came back to check on us, asked for another glass.

"Not until you finish that one," he told her, and she dutifully nearly emptied the glass.  He brought her another one, took the first and poured the last couple of drops into the second glass for emphasis.  Apparently you are expected to finish your wine here! 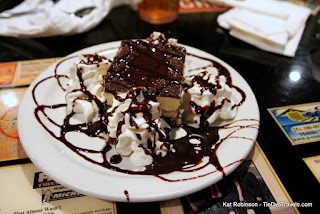 The conversation stretched out, as good conversations often do.  I asked for a box and ordered the tiramisu, which came to the table in a large square with whipped cream.  It was well chilled and soaked in espresso and had a strong, warm flavor of alcohol within.  I had to hand half 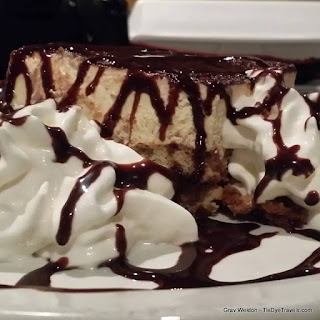 of it on its plate to Grav so I wouldn't injure myself on the rest.  It was a far larger portion than I had expected.

So, it turns out the gentleman who was waiting on us was one of the Gambino Brothers.  Some less-savvy diners might have found him strongly-tempered but Grav and I both recognized him as someone very emotionally invested in his restaurant.  Turns out the joint's been in this spot since 2002, and it's already gained the patina of a classic eatery.  Our trio of friends were regulars, and I could see it being a popular stop for folks in the neighborhood.  It strangely enough reminded me of Star of India in Little Rock... I suspect Mr. Gambino, like Sami Lal, knows everyone's name.

It was late, and we decided to let the staff go home and adjourned to one of our friends' homes.  As we were going out the door, Mr. Gambino told us to come back for the muffaletta, so I'm guessing there will soon be a return visit.

If you find yourself in Mobile out on the west side of town, not too far from the airport, look for the shopping center with the big shoe store.  On the western end, you'll find Gambino Brothers.  Try the lasagna.  But be sure to finish your wine. 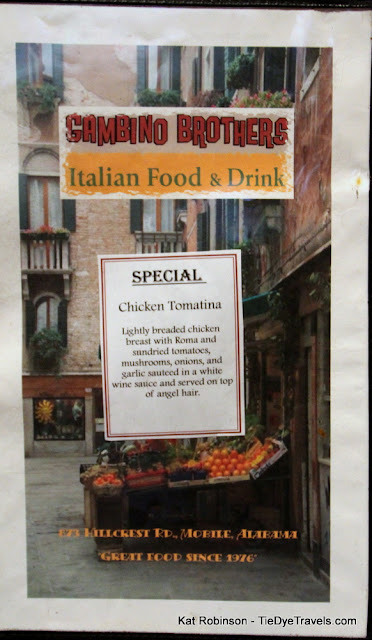 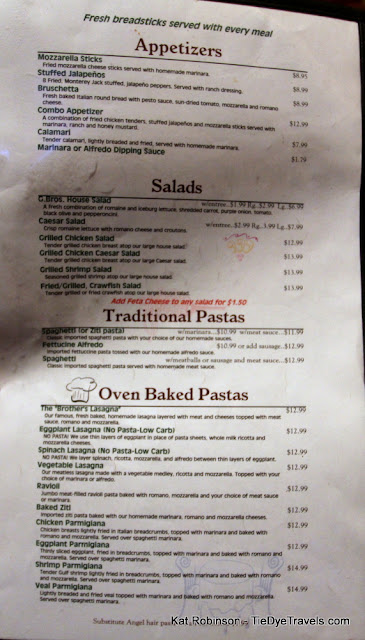 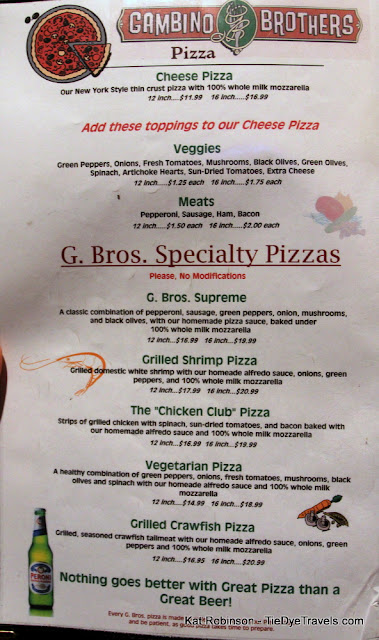