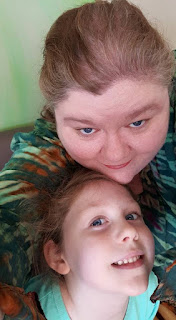 This morning was a milestone.  Hunter is six and a half years old, and she has adult teeth coming in. Unfortunately, she still had the baby teeth in those places, so they had to go.

We've been dreading this day for two weeks, ever since her last dental cleaning, when we found out her six year molars were already fully in and the tops of her front adult teeth were already poking through.  Though each of the baby teeth were loose, Hunter didn't seem too interested in pulling them out herself, so we made the appointment. 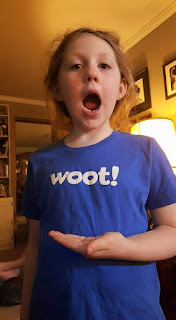 The next day, after pointing out how loose one of her bottom teeth had become, I'd finally convinced her to try.  She thought it would hurt.  I suggested she pull out the tube of Orajel in the bathroom drawer.  A few minutes later, I heard a shout and a laugh.  She had bent over the drawer looking for the Orajel and that particular tooth had fallen out.

I wish the others had come out so easily, but no dice.  Bagels, apples, waffles, nothing she ate seemed to make the teeth looser, so we were set to keep that appointment.

This should have been a just about Hunter losing teeth, but it's not.  Two weeks now, and I haven't been able to write much of anything.  I've been sad, reflective... numb, really.

A few days after Hunter lost that first tooth, we were on the road and got the news that one of our old friends was terminal.  Our friend Eddie had decided after 17 years of dialysis that he was throwing in the towel.  He had decided to end his dialysis.

We cut our trip short.

I've had friends die before.  One of my closest was a guy named Charles who was a mentor for me.  He passed in 2003 after a round of pneumonia that cascaded into a stroke and more.  Charles lived a couple of states away.  We were going to hang out at an event in Nashville over New Year's Eve weekend back in 2002, but he didn't show.  In an age before Facebook and Twitter, I was left with so many questions.  Emails weren't returned.  Phone calls weren't answered.  I didn't find out for more than a month... and yet he lingered for a couple of months more before he finally died.  I beat myself up for years that I didn't go see him, even though he wouldn't have known who I was.

Last year, I lost my friend Bryan.  One weekend he was in my kitchen cooking.  A few days later he was mentioning he was sick on Facebook.  And then a week after that, he was gone.  Just... gone.  Those few weeks were awful and weird, too.  Several of my Facebook acquaintances passed in the span of a month... most to the flu and to complications thereof.

But Eddie.  Man, I'd been bad about seeing Eddie.  Hadn't really run in the same circles for 15 years.  But there was a time, shortly after I'd graduated high school, that he was someone I really and truly admired.  He could sing and he could dance, and he could entertain.  Like my friends Charles and Bryan, I met Eddie through the Society for Creative Anachronism.  His songs were part of my college soundtrack.

When he stepped away from the SCA, we fell out of touch.  Still, his music is still part of my life, and I knew I had to go see him.

We did.  We brought Hunter and introduced her.  Grav had known Eddie longer than I had, meeting him several years before.  As we sat in the small hospital room, the years rolled away.  It was like we'd seen each other yesterday.  Eddie was very much at peace with his decision, and when we left I felt far less distressed than when we'd arrived.

I went back by myself a week later.  He was sleeping.  He was gone the next day.

There have been a few things I've had to do these past few weeks, but when it's come to sitting down and writing, I just haven't felt it.  I've beaten myself up about it, because this is how I make a living.  I can't go without writing for a while.  I made a choice a year ago to rely on my writing as my source of income, and if I fail, I let not only myself down but my daughter as well. 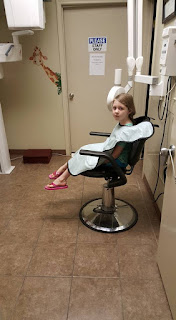 Yesterday I reminded her that today was the big day at the dentist.  She cried.  We tried to cheer her up.  My friend Leif even took her out to dinner for sushi, her favorite food.  Still, she dragged her feet getting ready for the dentist this morning, and when she was told she'd have to have her teeth out without me being there, she was pretty disappointed.  She sat in the X-ray chair and pouted.

Shortly after she went back, they came and fetched me to come sit with her.  She was really upset.  I realized then that every time I'd come to the dentist with her, I 'd sat with her through her cleanings.  I'd always been right there.  I wasn't really letting her build her confidence.  And now here she was, panicked because here were strangers sticking her with "ant bites" (Novocaine shots) and telling her to breathe weird air.

So I started making jokes, really bad jokes, and after a few minutes she finally started to calm down a little.  And they took out those other three teeth, and I was just grateful I was out of eyesight so she didn't see me cringe when they came out. 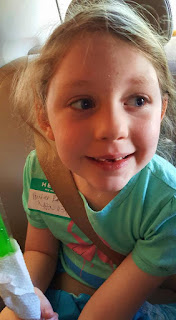 She got a Pop-Ice to suck on, but was so up on the nitrous oxide that she just held it and stared at it until after we got home when I insisted she drink the liquid.  It's an hour later and she's still holding the tube.  Her smile looks so weird now. Her appearance is very, very different.

I've spent the afternoon between laughing and being a bit weepy.  That smile will fill out again, but she'll look different.  She's going to change.

My friend Eddie has transitioned to whatever awaits him.  There will be others who will come into our lives.  Others will leave.  Hunter will lose more teeth and those adult teeth will come in.  And I will get back to writing again.

But for the moment, we're going to watch UHF and vegetate.  Because change needs a little time to process.