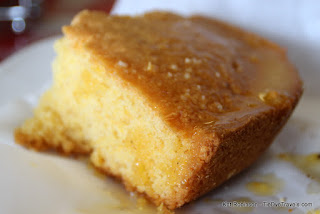 We stopped in at 2 Sisters N Da East -- also known as 2 Sisters Out East or just 2 Sisters -- thanks to my curiosity.  A couple of years ago, we were in New Orleans the first week of November, and we'd driven all over the area close to Six Flags New Orleans, looking at abandoned lots and roadways.  Having already

had lunch, we weren't really searching out a restaurant for dining, but there was a place along US Highway 90, also known as Chef Menteur, that looked promising.  I bookmarked it in my mind for later.

That later came on Sunday, June 28th, after the close of the Southern Foodways Summer Symposium, held this year in New Orleans.  Grav and I knew we wanted to take our time getting back to Arkansas, and we both knew we wanted lunch, and a few crazy turns had us heading due east on Highway 90.


When we pulled up, we noticed two things right off the bat -- every car in the lot was newer and nicer than what we were driving, and every license plate was from Mississippi or Louisiana.

Our waitress came and gave us menus and took our order for beverages.  Tea is sweet -- and when I say sweet, I mean it's a solution of sugar suspended in water that's almost a syrup.

Soft drinks come in bottles with a cup of ice. 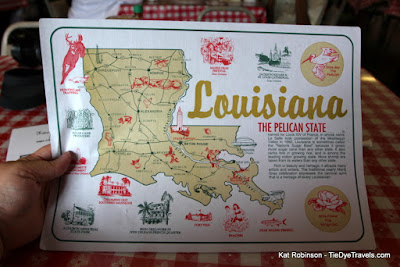 Good heavens, I haven't seen a state placemat like this one offered at 2 Sisters Out West since I was a kid. 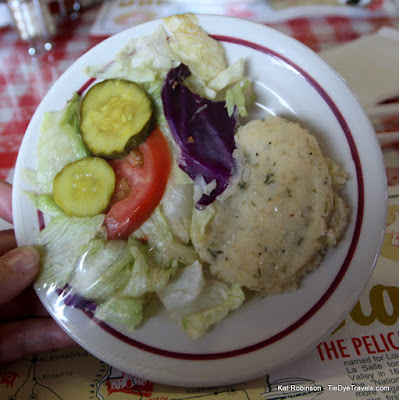 She brought us pre-wrapped fixing trays before we'd even ordered -- a small salad and a scoop of cold seasoned mashed potato "salad" -- and asked us what dressing we'd like.  She returned with a bottle of Kraft blue cheese dressing.


Then came cornbread, sweet and drizzled with melted butter on its surface.


We waited a little bit, sharing tales of our New Orleans trip. Our waitress soon returned with almost matching plates of side items... which were in themselves meal-worthy.

All items were identical between the two plates, save the one item we'd been given a choice on - collard greens or green beans. We split the difference.


The dirty rice was more like a south Arkansas dish of rice with a ground beef gravy. The macaroni and cheese was creamy inside and coated with more melted cheese on the outside. And the dressing... the cornbread dressing, a work of art, magnificently savory and yet somehow sweet. I believe Grav might have been happy if he'd only been provided with a bowl of this. It was truly wonderful.

What's more, each of the side items were provided in large proportion... especially those collard greens, which were gone, inhaled. The green beans were out of a can, but that was fine, they were still nicely seasoned. And the yams were just lightly candied, so they weren't too ungodly sweet.


I have had smothered rabbit in a deep roux before, and in broth. This was in a brownish red gravy that was more like a thick Creole sauce, and it was apparent the rabbit had stewed in said sauce for a very long time.


The bones fell out of the rabbit as Grav attempted to eat it. The meat didn't fall to shreds like chicken or pork usually do, but it was still succulent and pliant. And the deep color had permeated almost to the bone. It was rich, but not overwhelmingly heavy.


And then there was my plate of ox tails. I'd seen smothered ox tails on the board up front and had pretty much decided on them before I ever saw the table menu, which included the likes of smothered turkey neck, stewed hen, and gumbo with potato salad.


They were firm, not so much to be tough but not quite fork-tender either. They were apparently from the lower end of the tail and so were smaller, but though they were low on marrow, there was a lot of soft tendon, and I probably embarrassed myself as I sucked it off the bone.

2 Sisters Out East is a very comfortable restaurant, and we found ourselves welcomed and well fed. Each of our $11 meals could have fed both of us, and I regret we didn't have room for dessert, which included cobbler, cakes and pie. Next time we head down to New Orleans, a return visit is in order. 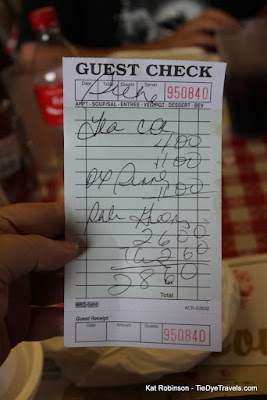 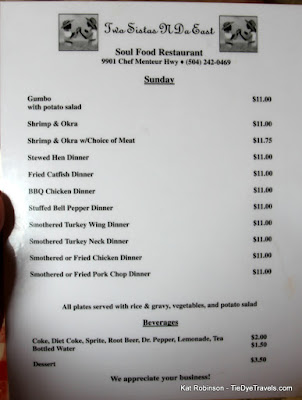 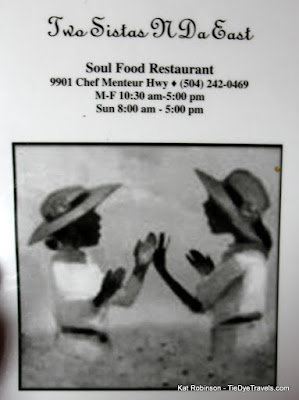