Monster Melts and Peach Shakes at Fat Dawgz BBQ and Something Sweet in Clarksville. 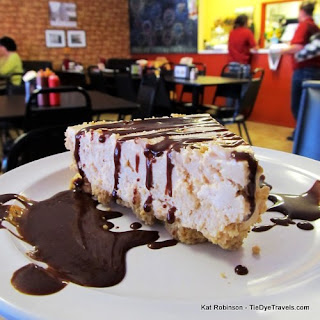 Johnson County is a prime destination this month with the Johnson County Peach Festival on the way While you're in town, grab a bite to eat at this comfortable joint on the downtown square. It also has great pie.

Clarksville is set in the heart of Arkansas peach country. Its locals are big fans of peaches, and one of its restaurants celebrates the juicy fruit in a particularly unique manner.

On the downtown square, there’s a little storefront that’s been open since November 2010. The spot: Fat Dawgz BBQ and Something Sweet. The food? Excellent. The pie? Peanut butter.

There’s not a whole lot of room inside, just eight or nine tables and a counter to order at. The specials for the day are written on a chalkboard. 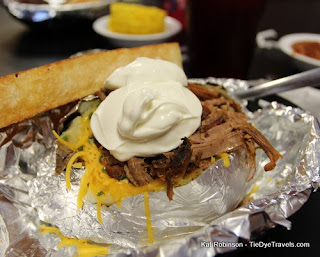 The food is great. I’m a big fan of the brisket-packed baked potato, which is a complete meal in a spud. The brisket falls to shreds as it smoked, which makes it tender and pliant. I like the combination of cheese, sour cream, meat and the milder of the two sauces. 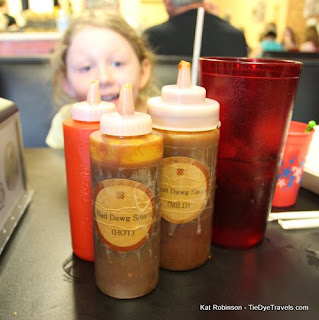 peppery hot and one thick and sweet. Either is good, and both mixed together are stupendous.

Grav likes the hot one on the Monster Melt, which is a long barbecue sandwich filled with your meat of choice (pork, beef or chicken), coleslaw, grilled onions and cheese. It’s true to its name and a hot mess, and hey, it’s great. He seems to think so, for sure. 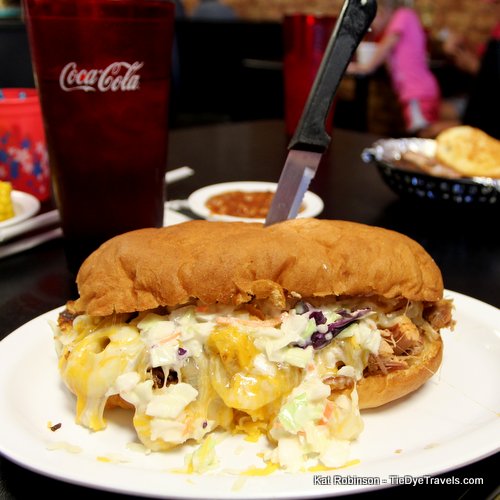 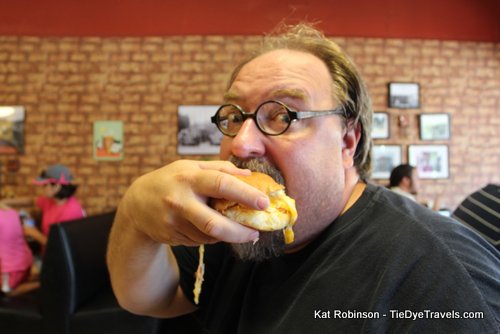 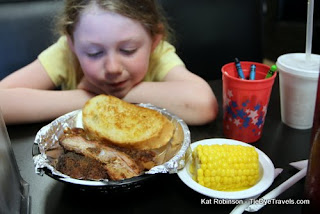 What really impresses me is that the kids menu at Fat Dawgz isn’t just chicken tenders and hot dogs. It includes barbecue, and for Hunter that means pork ribs. Not many places giving ribs to kids. I highly endorse this. 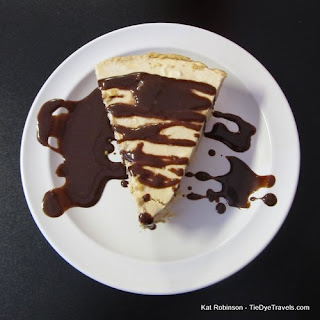 The other part of the name is Something Sweet, and there is always something sweet to offer. On the menu there are cobblers (that can be peach, cherry, apple or chocolate, depending on the day) with ice cream, a Texas sized cinnamon roll, cookies, cheesecake, carrot cake, a hot fudge brownie, root beer float, and a peanut butter pie so good I put it on the cover of my first book, Arkansas Pie: A Delicious Slice of the Natural State. Really, I did! 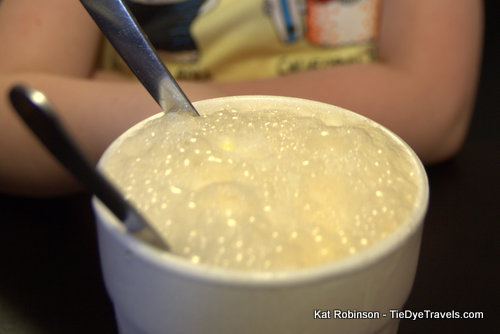 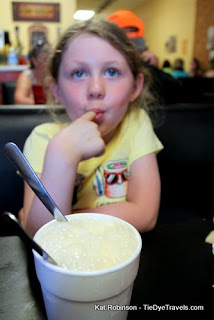 But during the summer, as soon as peaches start coming in, peach-related desserts earnestly appear on the blackboard. Sometimes that’s a peach pie or peach icebox pie or peach sundae… and sometimes, if you’re lucky, you can get a peach shake. This is no ordinary shake. It’s thick, it’s creamy, and there’s a whole peach in it, cut in half. None of those canned peaches, either – these are honest to goodness Johnson County peaches, which means they’re syrupy and sweet and they have a lovely bite to them. Can’t beat that!

You’ll find Fat Dawgz BBQ and Something Sweet at 108 Fulton in downtown Clarksville. It’s open for lunch and dinner, Tuesday through Saturday nights. For more information, call (479) 754-2857 or check out the restaurant’s Facebook page.