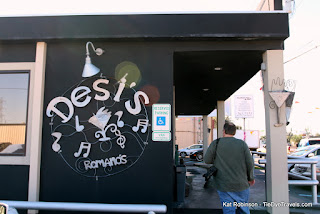 A couple of trips back, on a particular long Saturday morning before the first signing for my second book, Grav and I explored the land to the east of New Orleans proper. We spent a great deal of time looking around the area around the former Six Flags over New Orleans, then headed south and ended up across the bridge in Chalmette. Hungry, ready to take a break and in need of a clean restroom, we pulled over at the first place that smelled good. That place was Desi Romano's. 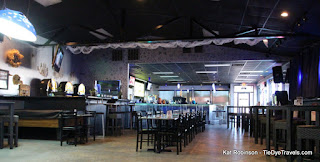 There wasn't a soul inside, except the barkeep, who told us anywhere was fine as far as sitting was concerned. We found our way to a spot in the back where the light wasn't too crazy. And before I even got through the menu, I

knew I was having fried zucchini sticks. After all, we'd just come off a cruise ship and I wanted something I couldn't find there.  Zucchini had been a particular craving.  Fried was fine, I just had a body craving that would not go away, so before we really got into the menu I had waved down the bar keep and hollered my request over for a basketful.

Thing is, I never expected them to look like this. 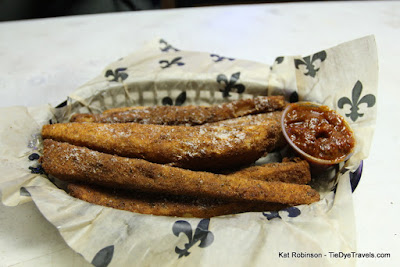 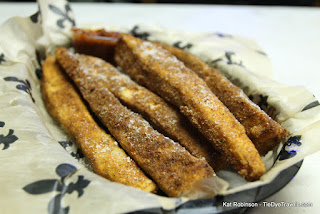 That's right.  Someone took a whole eggplant, cut it lengthwise repeatedly, battered it with egg and flour and seasonings and Parmesan cheese and dropped it, slice by slice, into the deep fryer.  Hot holy daffodil, this was better than any expectation I could have otherwise had fulfilled. 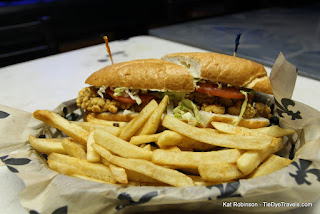 Had they been delivered by Sean Connery and a band of Creole pixies, I could not have been happier.

Grav also had a specific hankering... one he has fulfilled every time we head to New Orleans.  For him, it was a fried oyster sandwich, and this one 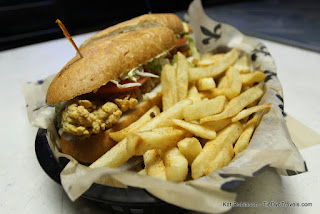 didn't disappoint.  He was so hungry for it, I never got the chance to get the full-on reverse angle.  What I ended up with instead were great shots of thick plankish fries, which were all he really let me grab from his basket.

I did find it interesting that Desi Romano's called these sandwiches, and not po'boys -- though, to be honest, these buns were pistolets, not baguettes and certainly not poor boy rolls (like I recently watched being made at John Gendusa Bakery in New Orleans proper).  It was a pretty great sandwich... if what Grav says is to be believed.  And yeah, I believe him.

So, maybe I should have stuck with the eggplant.  But then I saw this thing on the menu for mac and cheese.  Or more correctly:

It sounded ridiculous, and creamy, and sinful.  I saw the (seafood base) mention and decided okay, what the hell.

What proceeded to be delivered to me wasn't in a bread bowl at all.  Nor was it macaroni.  Instead, I was delivered this shallow bowl of farfalle pasta in a very thick, very highly seasoned white roux. 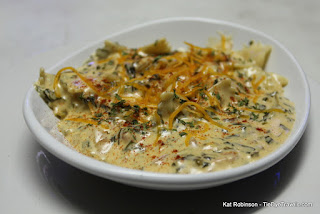 Yeah, but it smelled like the inside of a spicy daydream, and when I dug into it, I discovered it was the best cheesy gravy concoction I had found in a while... and that was after a week of eating on a cruise ship (no, really, see what I ate aboard the Carnival Elation here). 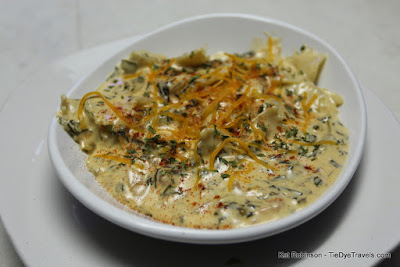 And I found myself reaching over into the basket of fried zucchini planks, breaking off pieces and dunking them in my pasta.  Who needed a fork?  This was the marvelous concoction I needed.  I decided right at that very moment that I wanted to open my own restaurant back home and serve fried zucchini covered with St. Bernard's Mac and Cheese and call it... oh hell, I have no idea what I would have called it.

What did need explaining was me to the barkeep, because I'm sure she was alone that day save whomever was in the kitchen.  She was busy with a couple of guys and a lady who came in after we did, all of whom sat at the bar, most of whom certainly caught the sight of me with my tongue on the bottom of that flat-bottomed bowl.  Because, and I don't say this lightly, I forgot my manners in the worst way possible.

Which is part of why I haven't been back to Desi Romano's since.  The other part, of course, is that we've been so busy on our other two runs down there, we never made it south of the Mississippi... at least, not that part of the Mississippi (we went west, not east back in September 2014). Maybe by this time the barkeep has moved on, or we might luck into her night off if we happen to darken the door again soon.  Better not chance it.  Besides, with a to-go order, I can combine the zucchini and mac and cheese at my own leisure in the privacy and convenience of my own hotel room.  That is, if either manage to make it that far. 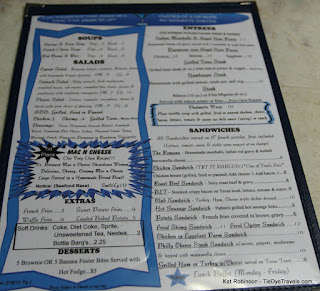 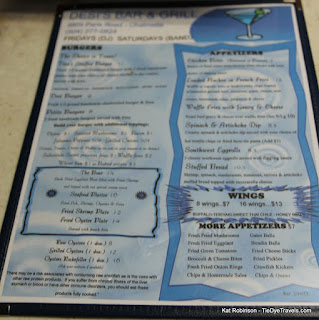