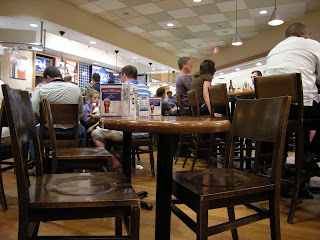 There’s something about a captive audience… it’s the one thing movie theaters and airports have in common. Variety is squelched and there’s little competition.

On layover at Hartford Jackson International Airport, I was out seeking a burger on my section of the concourse. The flight that would have taken me home was supposed to leave at 2:48. The boards showed it’d be 3:33 before departure, and I was hungry. I passed on a Wendy’s to check out Samuel Adam’s Brewhouse. 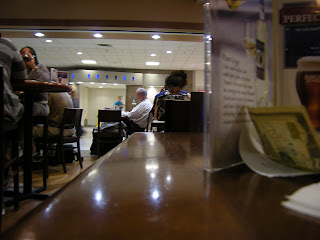 I sat at one of the tiny two seat tables and picked up a menu. The menu itself is small, focusing on Samuel Adams products (beer, of course), with a few salads, sandwiches, hot items and desserts listed. I don’t drink when I fly. After all, why increase the chance of air sickness? But there was a burger on the menu, suspiciously cheap ($5.50 for a hamburger, $6 for a cheeseburger and then up to the $9-10 range for a chicken sandwich). It… well, it was going to have to work.

My waiter quickly came by, took my order and ran off. He was back quickly with the tea and a check-out ticket. The tea was served up in a pint glass, a bit on the weak side with a wedge of lemon in the drink. But it was drinkable. 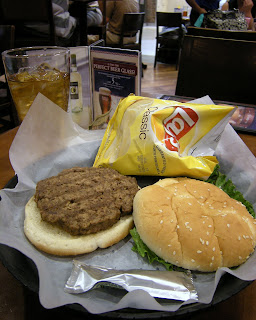 It took about 8 minutes for my burger to arrive. I knew not to expect haute cuisine, and I failed to receive such. The bun was untoasted but seeded, with a pale patty that had obviously had lines drawn onto it. It was served up with a slice of tomato and a leaf of green leaf lettuce, no onion, no pickle slices (though there was a pickle spear). The order was delivered unassembled with a bag of Lays potato chips. Condiments come on request.

On assembly, I discovered that while the top bun was cold and untoasted, the patty had apparently been heated with the bun. The bottom bun was hot to the touch. This required the inversion of the burger for quick consumption. 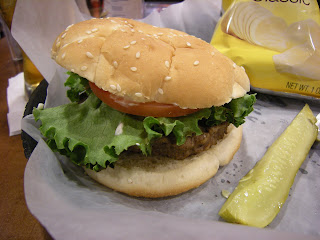 The meat of the burger itself has the flavor of a commercially prepared chicken fried steak without the breading. I ended up adding some of the chips to the burger to pump up the savory content. I wiped my hands on my jeans, as my waiter had failed to gift me with napkins. It was busy, so I wasn’t too worried about it. 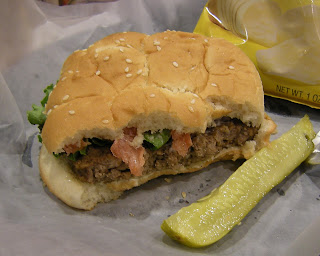 Of course, the moment I finished he was at my elbow to collect my $10 bill and ask me if I wanted dessert. When I said no, he disappeared again. /I assumed he had taken the rest for tip, but there he was a few minutes later as I drank the last of my tea, receipt and cash in-hand.
To purchase this article, email Kat Robinson at 5/03/2010 08:09:00 PM