Coming home from Dallas, treading the road construction and frustration on a Monday afternoon, I found myself with a mountainous hunger and no idea where to stop. I pulled off the road at Caddo Mills and stepped out to head into a convenience store. But I was lured back to the vehicle with a quest of scent… the scent of smoked meat hanging in the air. 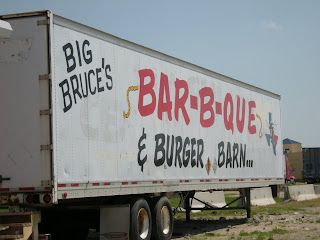 I guessed from the wind and the intensity I had a couple of blocks to go further to the east. I followed the scent to a long red building beside a trailer advertising “Big Bruce’s Bar-B-Cue and Burger Barn.” The lot was mostly empty -- not surprising, being nearly 2pm. My stomach grumbled. I let it lead me inside. 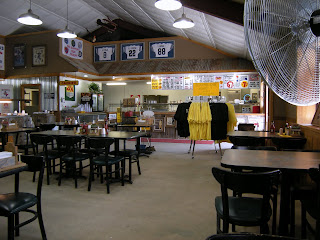 There was a sign on the door, “AC in by 5/24.” That was the date, May 24th, and the doors were open. But somehow the 80 degree temperature didn’t seem so bad. Inside the one big room spread out to its corners, an empty ice cream counter in one, a big round padded booth in another. Tables and chairs scattered out across a concrete floor, a stand of T-shirts for $10 each and a free country-music jukebox… but that was enough exposition. I needed food. I turned around and looked up at the menu posted over the lunchline. I briefly considered the Big Burger Special, but after my adventure with the Big Ass Burger at Twisted Root Burger Company the previous day I wasn’t really in the mood to tangle with that much ground beef.

What I hadn’t experienced during my entire trip was something I really love -- Texas barbecue. Sweet, smoky thick sauces and nicely smoked beef brisket, all about the smoke and the beef and that taste of the West. It didn’t take me long to scan through the menu and find Big Bruce’s Special, a large chopped beef sandwich served with two sides or a baked potato. That’d do. 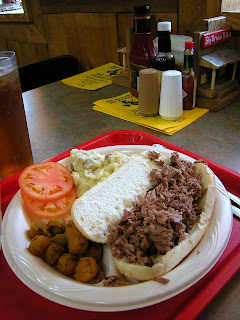 I picked up a tray and silverware and a guy came from the back to see what I wanted. When I ordered the special he donned fresh plastic gloves, walked over to a cutting board supporting a couple of smoked beef briskets and cut me a share. He pointed at it and asked if it was okay, then went to work chopping horizontally and vertically, dicing up the meat expertly and aptly depositing it on a long French roll. He passed over my plate and I went about choosing my sides. Home fries, French fries, barbecue beans, potato salad, cole slaw, all were inviting, but I ended up with skin-on mashed potatoes and fried okra. I also picked up a plastic boxed piece of buttermilk pie and had my food rung up by the waitress. She handed me a cup for tea and pointed me in the direction of the condiment bar, which had mayo and mustard and ketchup, onions and tomatoes and lettuce if I wanted any of that for my sandwich. Which I didn’t. All I wanted on my brisket was sauce, and I’d picked up a hot cup of that in the line.

I went and sat down my tray and filled my tea glass. The last of the other customers was standing, shuffling his feet and digging a tip out of his pocket. I took my usual photos and got prepared to dig in. 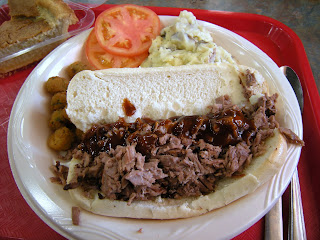 I tried the mashed potatoes first, and enjoyed the surprise. They were almost inconceivably creamy, very much so for skin-on potatoes. The softness and the buttery texture were certainly signs of high fat content. Did I care? No. I was just instantly pleased I’d gone this direction for my potato choice. The fried okra was more than passable, being nicely hot and not dried out within.

And the brisket. The meat itself was seasoned by the smoke alone, no other additions. It had come from a fattier portion of the brisket, but that just meant the meat was overall juicy (I frown upon removing brisket fat, it’s not natural). What really made it though was the sauce -- a little smoky but way on the sweet, clingy side. Good beef sauce, the brown sugar flavor matching well to the savory notes in the beef. This tasted like a well-tried competition sauce. 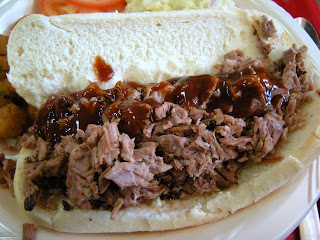 If there were any complaints to be had, it was the way the brisket completely failed to marry to the bun. I made a couple of attempts at eating the sandwich with my hands, but resorted to the fork. Which was fine, I suppose. It still tasted pretty darn good. Maybe with the assistance of a foil sheet I could have kept it together.

And then… then there was the buttermilk pie, which I took with me. That’s right -- I couldn’t eat it there. I’d filled up on what was on my platter and decided it would be far better to eat it later on the road than try to drive the rest of the way to Little Rock on an over-full stomach.

I asked the waitress when I was heading out how long the restaurant had been open. She told me it was their seventh Monday, so not quite seven weeks. Eventually they plan to have an ice cream counter going… as well as the AC. 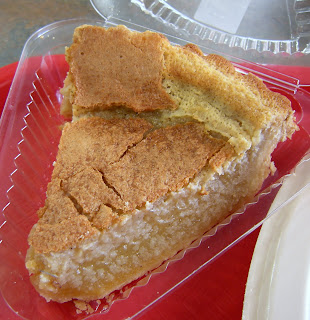 So, back to that pie. And the pie almost deserves its own entry. Big Bruce’s doesn’t make the pie. It comes from an operation called Uncle Willie’s in Red Oak. First bite was a classic buttermilk pie reaction, that surprise of “wow, is that lemon?” that’s quickly overcome by the creamy texture. But this one was different. It had a nicely salty savory crust, like what you might expect with a pasty or a hand pie instead of a sweet pie. The combination of salty, pumpkin pie-like spice and citrusy buttermilk makes a strongly powerful substance that holds its own in satisfying one’s hunger. It was good enough to be a meal in its own, and it was, somewhere around Arkadelphia. 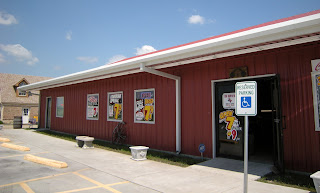 I don’t get down to Dallas much, usually only about once a year or so. But this place will be on my stop list for sure.