Hang Ten at The Hangout. 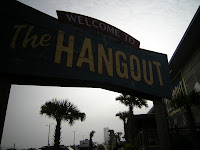 Looking for a great bite to eat right on the beach? You can’t go wrong with The Hangout. Located at Beach Boulevard and Gulf Shores Parkway (Alabama Highway 59), it’s easy to find and a lot of fun to boot. 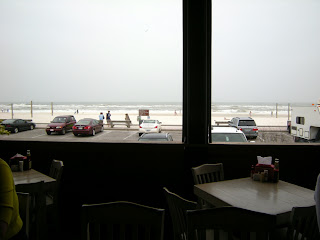 But what is it that The Hangout has to offer? Frankly, good food, cool drinks and a nostalgia kick to boot. I had the chance to visit last week, and I thoroughly enjoyed myself. 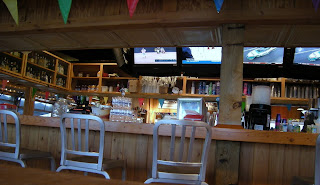 The Hangout itself is an open air temple to beachside enjoyment, with glass-fronted garage doors to pull down in case of a storm. The center of the restaurant is an airy wide playground of tables and chairs, great for a group who’s not concerned with a lot of noise around them. There’s a well stocked bar here, too, and in the evenings there are periodic trivia games hosted by the staff.

Off the beach side there’s a nice step-down section full of more tables, high-stepped on one side so more people can take in the view. Nothing here between your eyes and that white sand.


There are beverages to consume, like at any good beach party, and they include some great options. I was steered towards the Hang Ten, a mix of rum with banana and melon flavors, but I instead chose a Hangout Hangover ($7). The combination of Bacardi 151, blackberry brandy, raspberry liqueur, cranberry juice, pineapple and sours has the cumulative effect of giving you the sensation of being slapped with a blackberry. Nice, smooth, sweet and potentially dangerous if ordered repeatedly. 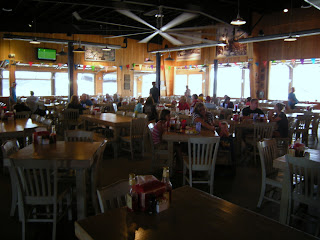 Later I was talked into trying a Bushwacker ($7), which appeared on many menus in the area while I was down that way. And yes, I have to agree with the folks who brought me -- it is indeed the equivalent of an adult milkshake. Vanilla ice cream is blended with Kamora, rum and cocoa liqueur for something similar to but at the same time entirely unlike a concrete. Thick enough to pass the straw test, yet strong enough to cause blurred vision.

Our group passed around a number of appetizers, giving me the chance to check out many things. Such as the Wild Frickles ($7.50), diagonally sliced Vlassic-style pickles battered and deep fried and served up with an avocado Ranch-style dressing. Very tart, but balanced well against the creaminess of the dip.

There’s also the Shaka Shaka Shrimp ($13), deep fried battered shrimp dipped in a spicy sauce. The shrimp are a little salty. The glaze is sweet, and the spice hits you late. I can see how someone could make a meal out of these.

The Spinach Artichoke Dip ($7.50) is pretty good, though very similar to the same dip I’ve had elsewhere. What makes it different is the chips, brightly colored red and green and yellow and very thin.

Another dip, the Tuna Dip ($9.50) contains smoked tuna. It’s heavy on the pickles, but something about smoking the tuna has given the dip a very bacon-y sort of flavor. It’s a real hit, especially served up on those nicely roasted pita chips. A favorite.

I also tried the soup of the day ($4.50 cup, $7.50 bowl). I have to say, the Corn Crab Chowder was really good. It had the consistency of chicken and dumplings. It was thick with lots of corn and shredded crab, with bits of green onion and parsley. This would be a good soup to have right on the beach itself once night falls.

Now, being at the coast, you’d think all you really want to have is seafood. Well, there’s something on the menu at The Hangout you need to try, and that’s the burger. The place offers two -- the Hang Ten Burger ($9.50) and the Wipeout Burger ($13.50). The latter is just a two-patty version of the former.

Each patty is half a pound served up on a toasted yellow bun, served up with lettuce, tomato, pickle and onion on the side. Ketchup and mustard squeeze bottles are already on the table; mayo or any other dressing comes by request. You can also get your burger with one of five cheeses (American, Swiss, Spicy Jack, Cheddar Cheese or Bleu Cheese Crumbles), mushrooms, fried jalapenos, applewood smoked bacon, or onion straws for a dollar more.

Then there’s dessert. The one you’ll find on the menu is The Sand Pile ($6.50), the traditional brownie a la mode. The Hangout’s version is very rich, a very decadent thick brownie with nuts. There are also nuts served over the top of the sundae.

The one you won’t find but will have to ask for is the Fried Honeybun, a scary dessert that doesn’t even appear on the menu. It’s a honeybun fried in butter, then drizzled with chocolate sauce and served with a scoop of ice cream. It is so sweet, yet somehow so addictive. We’re talking Hostess-style honeybun… you could likely replicate the experience at home, but high-fat concentration desserts like this should be served with plenty of spoons and plenty of friends to share with -- a true “dare ya” sort of dessert.

The Hangout has long roots. Back in the 50s and 60s it was an open air hangout where kids could shoot the breeze, play pinball or arcade games, guzzle down nickel root beer and munch on quarter hamburgers. But it faded away. Two years ago, its new owners debuted this most recent incarnation. 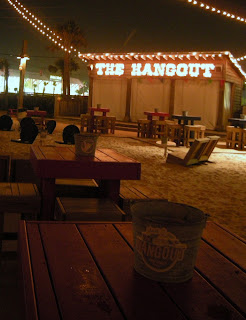 Does it succeed? From the crowd I saw, yes. Though it was a Sunday night there were plenty of people on the beach out front when we arrived, and there was a good group when we left, sharing stories around a fire-lit area and listening to a young man and his guitar. Five young folks were playing hacky sack and one young man was dabbling in foam from the foam machine. The Hangout really does soak up its heritage and serve it well. I’m looking forward to my next visit.

You can find out more information on The Hangout's website. 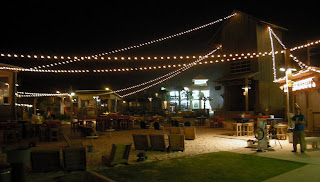