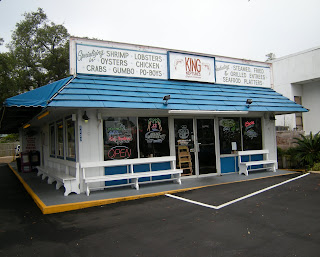 Finding seafood along the Alabama Gulf Coast isn’t hard. I ate at seven restaurants over four days and all seven of them had crab claws and Key Lime Pie. Including this one that really stood out. King Neptune’s is a small place buffeted by another seafood joint and a realty office, across the street from yet another seafood place and 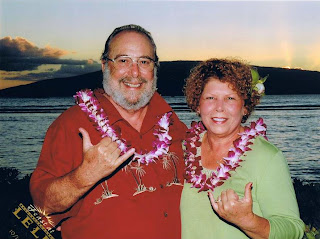 a doughnut shop. The signs are modest, the exterior reminiscent of a 50s style drive-in. But inside you’re going to find some of the best seafood in Gulf Shores.

The restaurant, started 17 years ago by proprietors Al and Diane Sawyer (not THAT Diane Sawyer) celebrates the fruit of the Gulf by featuring and serving up only locally harvested shrimp on its menu. 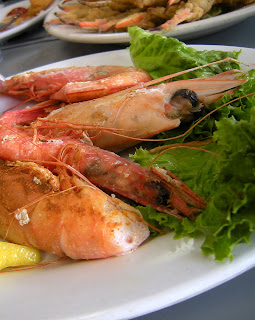 The staff does that in an unpretentious, relaxed atmosphere. You can put your elbows on the table here and no one’s going to mind.

Went with a group on the first day of May… I’d been told great stories about the place, and was looking forward to that first taste of Royal Red shrimp I’d been waiting for. But before that, there were appetizers. 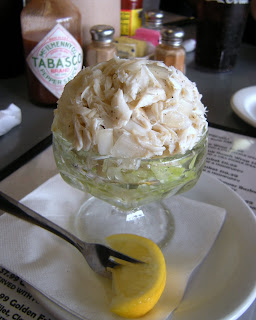 The first -- the West Indies Salad ($11.99), is something I’ve only found in lower Alabama. It’s a marinated salad of lump crabmeat, Vidalia onions, vinegar and oil, and it’s served up with a basket of crackers. Perhaps it’s my southern Arkansas upbringing, but my first inclination was to have a bite spread out on a club cracker. It’s a little astringent but also sweet from the crab and the onion. King Neptune’s version comes out in a large, perfect scoop, lightly peppered on a bed of lettuce with lemon if you want it. 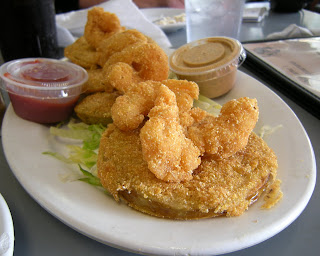 Then came the Fried Green Tomatoes and Shrimp ($7.99). Both are liberally breaded with cornmeal. The shrimp are on the savory side, nice firm morsels that bounce back a little to the bite. The tomatoes are about a quarter inch thick, just thick enough to hold their consistency and stand up to a fork, but the ones we got were a bit tart. The house cocktail sauce is fine, though I found the remoulade to be a little too spicy for my taste. 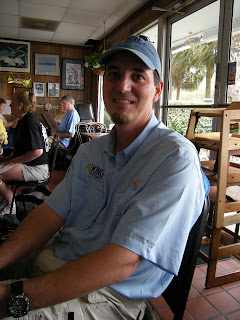 Tony Sawyer sat down with us for a few minutes while we were enjoying the first couple of appetizers. He says his dad has a ten inch thick cookbook of the recipes they use in the restaurant in the back. His favorite items on the menu are the West Indies Salad and the Seafood Burrito, though he says he eats just about everything they have to offer. He also told us the hours tend to vary at the restaurant -- they always open at eleven in the morning, but in the winter they close at eight, in the spring and fall at nine and during the summer at ten. He mentioned there are regulars who come by, and sometimes they’re met at the door with their usual beverage. He also mentioned that diners lined up out the door on a daily basis. It was just a few minutes past eleven, so I had no evidence of that yet. I figured I’d wait and see if he was right. 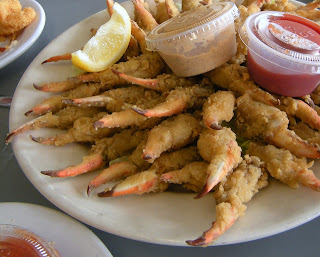 The next round of shared appetizers came out. The Fried Crab Claws ($17.99) were a sizeable plate -- I’m estimating a pound’s worth, and meaty. The breading was light and there was enough meat on the claws to make them worthwhile. They were nice and fat and a good mouthful.

Tony talked with us a bit longer, telling us how his dad learned to cook seafood from his aunts, and that his dad got his culinary leanings from his Italian mother, who came out of Brooklyn. Tony himself is very involved in the family business, but when he’s free from the store he likes to fish and hunt and be out on the water.

Al himself came by and made an appearance, checking on us. We all tried to talk him into a restaurant cookbook that could be sold to consumers. He looked interested. We’ll see where that goes. 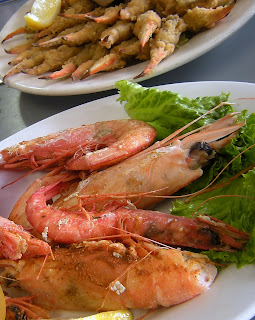 We’d requested an order of steamed Royal Reds ($13.99 half pound, $19.99 pound if ordered in a meal) to share, and they came to the table, a half pound’s worth. There weren’t very many of them, but that was okay -- they were big, the largest of the mess a good five inches long and very fat. We passed them around, each of us taking one to try. Being a Southern girl, it was nothing for me to pop it open like a crawfish, snapping the head and using my thumb to cut down the inside and pull off the legs and shell. I deveined it with a butter knife and gave it a try. I’d been skeptical up to that point, since I couldn’t tell much difference in flavor between a brown or pink shrimp. But this? It was different. The meat has a more, dare I say, meaty texture, more like lobster than shrimp. It’s more savory, too. And somehow, it manages to keep the sweet of shrimp. Now I understand why they’re so highly prized. 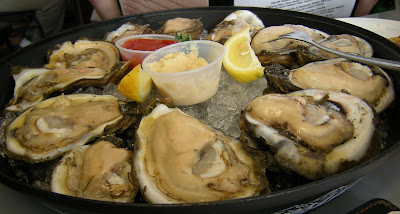 We decided to share a dozen raw oysters ($6.50 a dozen). They were big. I don’t know if perhaps we got them on a good day or what, but those were some of the largest I’ve ever seen on the half shell. They were served up with cocktail sauce and horseradish, but I like mine straight up -- straight out of the shell. Other tablemates had theirs on crackers with a little horseradish and such.

The coleslaw for my dinner was brought over in advance of the platter. It was peppery and small-cut. 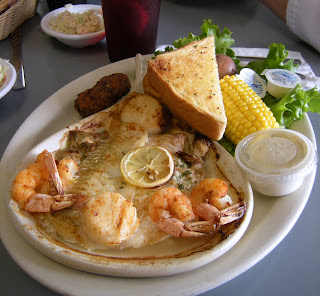 And then came the platter itself. I’d gone for the Broiled Combination Seafood Platter ($19.99), a selection of shrimp, scallops, oysters and a filet of flounder baked in the oven and served with corn and potatoes. The baked together mess (and I say that as in a lot of things cooked together, not that it was messy) blended well in a buttery sort of way, with a very light crown of spices and a lemon slice on top. 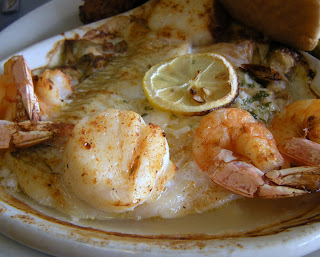 I don’t care for flounder most of the time, but this was decadently light fish that didn’t resemble what I’d been served up here in Arkansas. It was nice and neat fish, and if I knew that’s what I’d get when I ordered all the time I’d eat more flounder.

The nicely cut scallops were at their perfect firmness. The shrimp were good, though I secretly wished the Royal Reds had come in this dish instead of pink. The oysters had taken on a good amount of that buttery flavor and were still pretty soft. 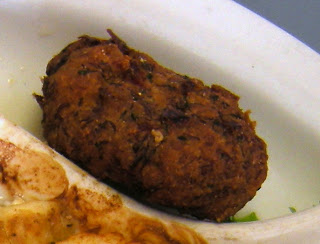 But the star of this show to me was the most unheralded bit of the plate -- a three inch chunky crab cake tucked down on the side of the platter. It was sweet and bready without having a whole lot of breading in it, with little bits of red and green bell pepper in it. It was both crispy and moist, and deserved its own special recognition. 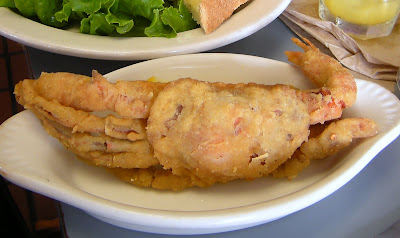 One of my traveling companions had ordered up the same thing, but with the additional fried soft shell crab. I just had to take a photo.

I also sampled one of the house hush puppies, just for the heck of it. Theirs come sweet and corny with a good bit of jalapeno in them. Nice. I wonder if the sweetness is an Alabama trait or just how ol’ Al learned how to make them.

Well, you just can’t take me anywhere without me at least sampling a dessert, especially with a crowd to share with. We decided between the six of us to try all three of the house desserts. This may have been a mistake at the waistline but it was a great decision for the taste buds. 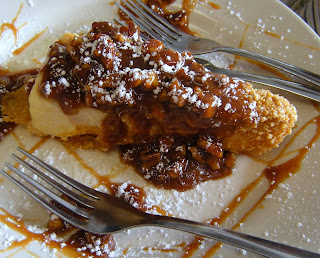 I have to start off with what is the best Fried Cheesecake ($5.99) I have ever tried. I’ve had bad fried cheesecake at the State Fair before… where the center was still frozen and the strange corndog-type batter was thick. This no more resembled that than my arm resembles a fire hose. It’s a lovely creamy cheesecake, something that’s definitely local-made and not off the back of a Sysco truck. The coating is cornflake-based, very crispy and crunchy. Over that is a praline sauce dotted with chopped pecans. It’s been a few days since my experience but I can still smell the sweetness and the nuttiness of the cheesecake in my mind. We argued over the last bite. 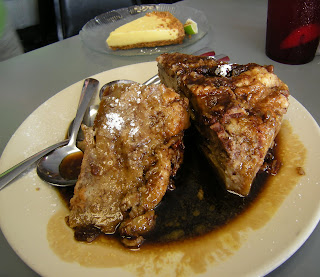 We also had to try the Key Lime Pie ($4.50), and I was quite pleased with the balance of sweet and tart. It’s very creamy and very yellow. A winner.

But then… then there was the dessert that about defeated us all. The Bread Pudding ($4.50) is massive, a mountain of bready custardy goodness served up on a dinner plate. Like all good bread puddings, 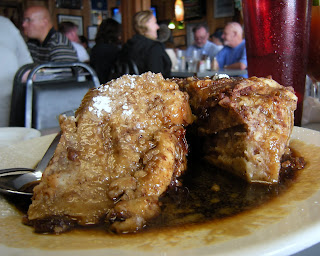 it’s a nice variety of textures. It’s obviously a French bread style pudding, with notes of vanilla and banana throughout. It’s served up with a whiskey sauce that’s almost kid-safe, warm but not burning. And it seemed to be about as big as my head. Of all the desserts, it’s the only one that we had to leave bits behind. As it was, wheelbarrow reinforcements were considered.

It was about that point I noticed the line. There were a few people standing just inside the doorway, and another dozen right outside the door. With much more to do for the day and a little guilt for holding up the table space, we managed to get upright again and departed.

King Neptune’s is located a couple of blocks south of the Fort Morgan Highway on the Gulf Shores Parkway. I highly recommend a stop in if you’re craving seafood. You can also call them at (251) 968-5464 or check out their pretty good website.