Fuzzy Memories and a Short Stack.

This coffee cup somehow reminds me of my grandfather. He was a one-armed house painter, no joke. I don’t have a lot of recollection of him, but one thing I recall is that he always had his coffee in a brown cup. Of course, he used a little milk or Eagle Brand sweetened condensed milk in his. 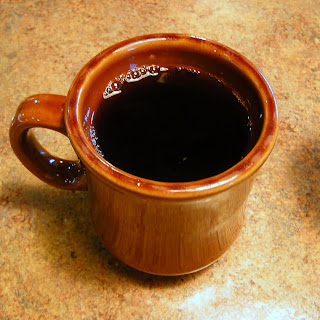 It’s funny -- I had family in Gurdon, but I’ve been passing by the South Fork Restaurant for years. Never occurred to me to go in. And from the outside, it didn’t look that large to me. Then again, exit 63 is a patch of big sky in between the woods and the highway. Go figure.

Walked in this particular Friday morning on my way to Dallas. There were a lot of tables right inside the door but I wanted to be by the window, in a booth. One of the waitresses told me to just sit anywhere, so I found a nice booth next to the window under a rope-strung light. I had coffee at my elbow in mere moments. My waitress left me with a menu and I looked at it. What I wanted was right there, and I ordered straight up the next time she came around -- a short stack and cheese grits. She looked down at my notepad and smiled, looked at my coffee, and went to fetch a pot.

The crowd was pretty evenly split. On the window side of the establishment seemed to be the locals, the other side truckers and other passersby just stopping in. The local crowd was mostly older folk, remnants of a once bustling population in these parts. Industry has, for the most part, left his area. Most everything has gone to the big city. The folks left hang onto their homesteads - retirees, gentlemen farmers and those working for services that support the logging industry.

There was something there that morning, though, something in the taughtness of the face of the waitresses, the meticulously curled and styled ‘dos of the matrons at the next occupied table, the men in their baseball caps with their slab jowls. Something so familiar.

When the waitress came around I found myself drifting so easily into that South Arkansas drawl. That made the strange blend of Midwestern and New England and who knows what else across on the other side of the room seem that much more strange. 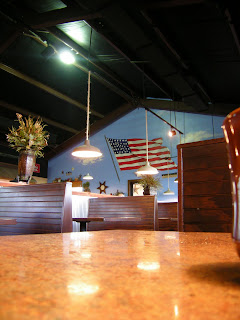 Maybe it was the way the light filtered in through the window, that particular angle from the Eastern sky at this time of the morning, that set off that familiar sensation. But that’s silly. Home for me is Little Rock, with its fused Midwestern and Southern accents and attitudes, a mesh of trees and steel and concrete, all waiting and ready for the next big piece of news. Little Rock smells of political sweat and comfortable people, both static and in motion, still very much trying to be grown up and mature but still waiting for its voice to change. It’s shot up and out since my childhood days, but it’s still not a really big city, and I hope it never gets there.

But South Fork… it’s like one big pole barn erected on the side of an old gas station, decked out and painted up in black and beige and brown with that big blue wall and a gigantic painted-on American flag. There’s a counter for loners like me at the back, a true diner-style counter that faces into the kitchen, but I’d rather crouch in a booth and kick back in my few minutes off the road. I might have felt differently if the place had been packed. It’s a big place -- and though there were nearly 30 people inside it still felt cavernous.

I hear the guys over at the next table, jawing on in that particular South Arkansas patter I grew up on, the emphasis on every second or fourth syllable, the punctuation with “pap pap!” or “oo hey” or “huh.” Lots of “you” and that big long “I” and the “me-uns” too. 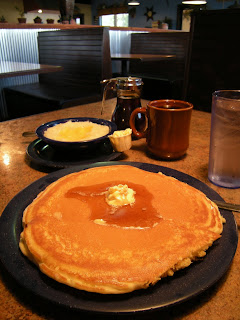 My waitress brought over the food, and I ate and listened to the conversations around me, a fly on the wall in this country restaurant. The plate-sized corny pancakes were more than I had needed, but I had really needed the cheesy grits. Something filling, something sustaining on a long drive. Yeah, I could have made do with eggs, but being on the road eggs are hard on the system.

The bustle continued around me, the two waitresses warming up coffee here and there, flittering about like hummingbirds at a feeder, asking customers “can I take that out of your way, dear?” and “what else you need, sugar?” I dallied over my third cup of coffee, mentally calculating and wondering if I could make it to Sulphur Springs before my rest stop or if I needed to park it at Texarkana for a bit.

I nearly ran into my waitress as I started to get up, she coming by to fill my coffee again. She apologized as I shook my head, not needing a warmup this time on the coffee. I smiled and she smiled, and nodded her head the way people in this part of the state tend to do. I flipped my dollar on the table and went up front to pay.

It wasn’t long before I was back on the road, heading to Dallas, shaking off that strange sensation of home and feeling the coffee go right on through me.