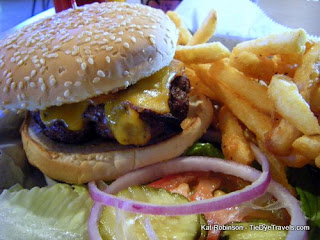 This restaurant has closed. Read about the restaurant in this space now, Buenos Aires Grill & Cafe, here.

Is Bill’s Burger Better Than The Bevy of Other Burgers Battling For The Best of Arkansas?  Bill St. in Little Rock’s River Market District is making a run for the title.

A month is really not enough time to tell if a restaurant is going to survive, or if its cuisine is worthy of exaltation.  That being said, Bill St.Bar and Grill in Little Rock just might have the best burger in Little Rock.

That’s a heck of a thing to say, I know.  But the burger -- actually a nice full list of different burgers -- seems to be something extraordinary. 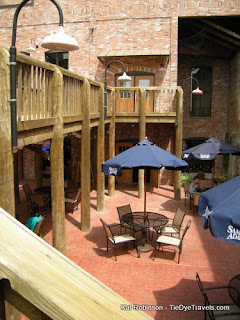 Bill St. opened next door to the Clinton Library Store on President Clinton Avenue just down from the Clinton Presidential Center in Little Rock.  So I suppose there’s no mistaking how the place got its name.

I went on a perfectly seasonable spring noontime to check this burger out.  I’d already had a couple of people urgently email and Twitter at me their joy in finding joy on a bun… that sort of recommendation needs a checkout. 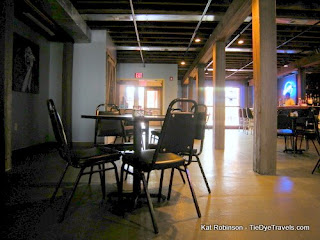 The restaurant itself is below street level, with a descending wooden staircase down onto the patio.  There is an elevator upstairs in the banquet room area.  The rejuvenated building has been scraped down to its structural timbers, with quietly blue walls and nicely spaced tables throughout.  There’s a bar at the patio end and a few TV monitors, a few painted rendition of famous rock photographs of Jimi Hendrix and John Lennon.  Downtempo music fills the space.

The menu itself seems a little pretentious for a burger bar.  Appetizers include Portabella “Fries” with Ranch dressing and Sausage Balls with Dijon-mayonnaise.  There’s also an Arkansas classic, Pimento Cheese with Celery.  I got a kick out of the list of wing flavors, which include “Russian Roulette:  one of these wings is not like the others.”  There are four salads and five sandwiches and even Fish and Chips on the menu.  But I was on a quest.

But which burger do you go with?  Bill St. offers 11 -- including a Veggie Burger and a Salmon Burger (which the menu warns may include bones).  The other nine include the Argentina (with fried egg and salsa), the Taco (with taco seasoning and guacamole), the Napalm (with fried jalapeno peppers, Habanero puree, Pepper Jack cheese and grilled pineapple), the Aloha (with teriyaki grilled pineapple, ham and Swiss cheese), the Steakhouse (mushroom, Swiss, caramelized onion and bacon), the Black and Blue (with bleu cheese, an onion ring, steak sauce and bacon) and the Peanut Butter and Bacon.  All of these seemed interesting, but to get to the real truth of whether this could be the best burger in town I had to go with the Bill Burger or the Double Bill. 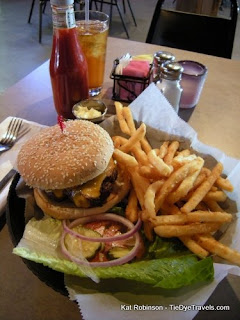 I ended up choosing the simple Bill Burger… because frankly, I can’t eat a pound of burger meat in one sitting and it’d have been a waste.  The Bill Burger comes with Cheddar cheese and bacon, and like all of the other burgers there it comes cooked to order, with medium as a default.  I asked for medium rare, and I got it.  Took about 10 minutes for my order to come out.

Everything… everything except the signature items, that is, comes on the side.  You ask for your condiments (don’t worry, you’re prompted) and you get your burger with a mess of hot fries and a knife and fork.  Along with the burger and fries there’s a pile of veggies.  My experience included a big newspaper like eight inch long flat of Romaine, a single slice of tomato, a couple of thin slices of red onion and a couple of chunky bread and butter pickles. 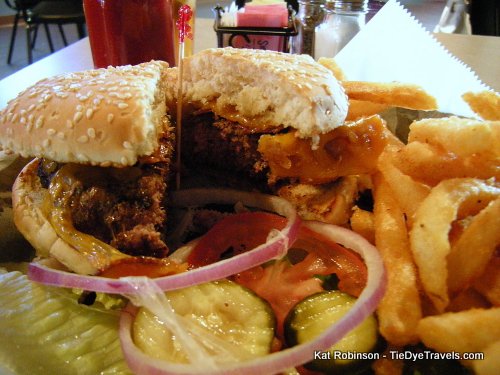 And the burger… well, first off, the bacon.  It’s not crispy-crunchy, it’s cooked through okay.  The Cheddar cheese is more than adequate.  And quite honestly, you could dispense with both and be perfectly happy.  It’s the spice in the burger itself… that fantastic combination of black pepper and some amazing special seasoning… that’s the good stuff.  It matches well to the fries and even better with the bread and butter pickles.  I coulda used about four times as many pickles, but that’s me being crazy about bread and butter pickles there, Maynard.

The Bill Burger is a half pound pub burger, served up on a very lightly toasted (inside only) sesame seed bun.  The seeds go everywhere.  It has a pick for a reason -- it will slide all over the place depending on whether and what vegetation you add to it.  It’s juicy.  But dang, it’s good.

The fries?  Also very good.  Of the lightly battered variety, they’re nicely golden on the outside and almost creamy smooth on the inside.  They’re dipping fries, and if you ask for mayo or steak sauce to dip them in no one’s going to raise an eyebrow.  At least, not the wait staff.

And that’s the last bit I need to comment on here.  The wait staff is very eager right now.  They’re overcome with the need to please.  I don’t know if this will continue, but if it does I think it can be overlooked.  They’re young, they’re excited, and they’re willing to do just about anything to make sure you have a good experience.  We’ll have to see if that attitude continues.

So is Bill St. the king of Little Rock burgers?  That’s a hard title to pin down as it is.  I guess I’m not ready to concede it just yet… as I said, a month’s just not enough time.  But if the food’s consistent, I could see the title changing hands in the near future.