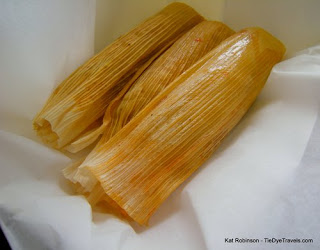 For the longest time, I’ve been meaning to get by Terri-Lynn’s B-B-Q. Always seems like when they’re open I’m passing by on the way to somewhere else. And when I set aside the time to go, they’re closed. Well, I had to fix that. 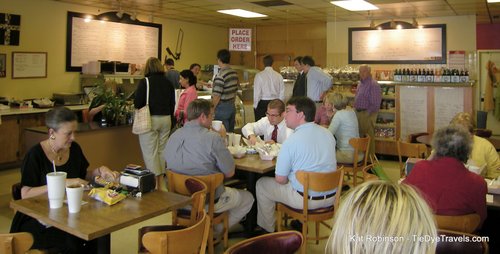 I went for lunch yesterday, right before noon. The lot was packed. I was fortunate enough to get a spot when someone else pulled out -- but even after I entered there were cars circling the lot. There was a bit of a line when I entered, but it went so fast that I wasn’t quite solidified on what I wanted for lunch. I knew I wanted to try the barbecue and the tamales… so what could I do?

“You could order both,” I heard. So I did. I paid for my order, was given a ticket and a cup for a beverage. I turned and looked around. There wasn’t a clear table anywhere.

But there was a bar. I filled my cup with iced tea and sat down at one of the bar seats that line the window and one wall. It gave me a chance to look around a bit and watch the crowd.

Those circling cars seemed to be people coming in to pick up call-in orders. There sure were a lot of them -- just like there were plenty of orders coming up, one after another. With each order, the lady behind the counter hollered out the number… and if someone didn’t get up quickly, she hollered out what was on the order.

My order came up about 10 minutes after I order. I retrieved it and went back to my claimed seat. Of course I took photographs. 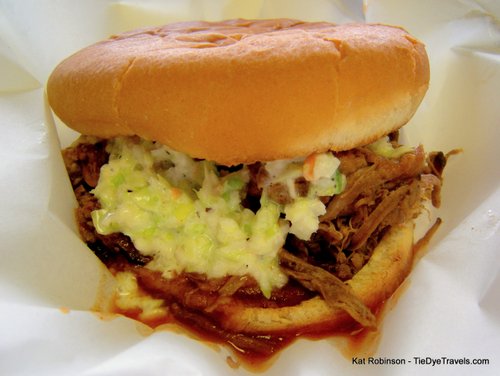 First, the barbecue. Like most good Arkansas barbecue sandwiches, this one was topped with an ample supply of cole slaw, very fragrant with cabbage. I’d gone for the Regular Chopped Beef Sandwich ($4.79). The sauce was soaking into the bottom bun already. Both buns were lightly toasted. The sauce is on the thin side, tangy and slightly but not strongly sweet with a good degree of tartness, a vinegar and spice mix. It paired well with the beef in the sandwich not because it was particularly strong but because it stepped out of the way and allowed the flavor of the beef to shine. The beef itself had a nice smoky flavor. 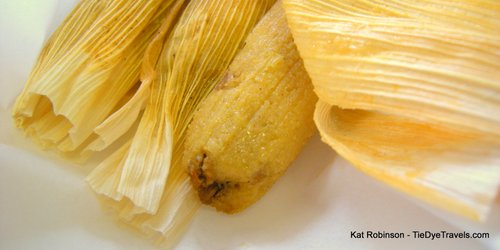 The tamales are on the long, thin side. They come still wrapped in their corn husks. Inside, there’s a good blend of cornmeal and spices and shredded beef. What’s not apparent at first is the heat; first you taste the corn in the cornmeal, then the beef, then you get this rush of spicy that’s just great.

Terri-Lynn’s offers a decent selection of sandwiches, specialty hot dogs, salads and nachos, and the prices seem pretty reasonable. Side items include potato salad, macaroni salad, cole slaw. BBQ beans and devilled eggs. They also offer Chocolate Chess Pie and Double Chocolate Brownies -- some time when I don’t decide to eat both a barbecue sandwich and an order of tamales I’ll give it a shot.

UPDATE:  Terri-Lynn's is another of those great places I keep forgetting to share with others. Heaven knows, I already have to jostled elbows to find a spot during lunch at one of the tables or counters in the tight little riestaurant. I've deterined the best time to go is between two and four in the afternoon.

That's where I've discovered all sorts of delights. In addition to the lovely beef barbecue with slaw, I've dived into new favorites over time.