Where the Barbecue Began. 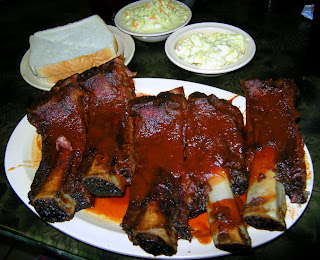 Everyone seems to know about the Neely’s. Pat and Gina Neely have Neely’s BBQ in Memphis, they have their show Down Home with the Neely’s on Food Network, they have a famous catering business and even cookbooks and cookware and all the trappings of Food Network Stars. But the Neely barbecue dynasty doesn’t begin with Pat and Gina. It begins with Pat’s uncle, Jim. And it didn’t start with barbecue… it started with a grocery store.

Back in 1979, Jim Neely bought a grocery store in the 22nd block of South Third Street in Memphis. Some might have looked at the failing neighborhood and the local street element and thought better of the idea. But Jim Neely had an idea. He’d done pretty well for years with an insurance business; now with a son discharged from the military after a spleen removal and Neely’s own impending retirement from insurance sales, it seemed like a good idea. It took a lot though… and you can read all about it on the restaurant’s website. No need to rehash it all.

To summarize, though, he got the grocery store started and he kept trying to figure out what would draw in the customers. And he decided to pursue that Memphis barbecue taste he’d grown up with. A friend from California taught him how to keep the fire going under his smoker and how to get his business underway, and there you go -- barbecue in the grocery store. By 1989, the barbecue business had become so successful Neely didn’t need the grocery store so the barbecue joint took over the building. There have been expansions since then, and today 275 people can fit inside for lunch or dinner (there’s also a drive-thru).

One Sunday in March around noontime, a group of us showed up on the doorstep. The legend of Neely’s juicy barbecue had brought us together for a meal. We looked over the menu, placed our orders, and relaxed with beverages and talk about what we were about to receive.

The walls of Interstate BBQ are covered with photographs of celebrities offering their endorsements, with certificates of thanks and recognition and banners and this and that, like any long-established neighborhood joint should have. We’d taken over one of the large tables in the middle of the larger dining room. Others filled in the booths and tables around us as we waited. While there were just a few there when we arrived, by the time the food came out the place was packed with hungry patrons. 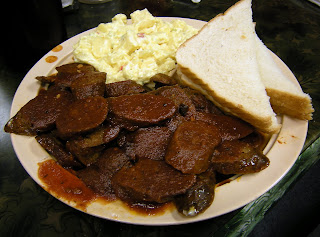 The orders varied at our table. My husband went for a large order of California Beef Links ($8.25), sliced hunks of sausage that had been smoked and then dumped into the sauce. The sausage bits had soaked up a good deal of the barbecue spices and were very yummy, a good match for the pasty yellow potato salad and the white bread that comes with most any order. 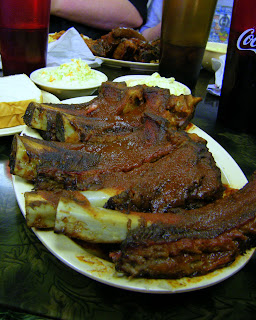 And this is where I diverge from my normal descriptions of the food. Because this was the point where my daughter reached a milestone. I’d ordered up a large order of Beef Ribs ($9.75, $8.75 for a small order) with the intention of sharing the meal with my child. With a butter knife and fork I pried meat off half of one of the bones, stripped it down a little, and then held it out for Hunter to try. At first she looked at me like I was crazy. She stuck her tongue out and touched it to the rib. She laughed a little and did it again. 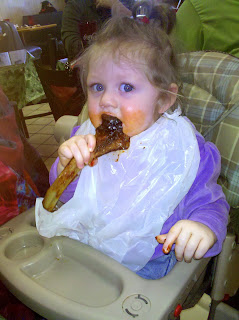 I was hungry. I wanted to eat. So I held that rib out to her in my left hand while I picked up one with my right and gnawed down. The beef rib was soft with a nice pink interior that a good smoking will give you. Notes of the peppery dry rub beneath were evident under the generously soaked wet rub above, full of pepper and tangy goodness. The sauce was sticky, and it got everywhere, but without a free hand I threw caution to the wind and let a little sauce dribble down my chin. 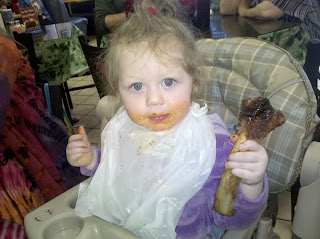 And then I felt this very sharp pain in the meaty part of my left hand. I turned to look. Hunter had chawed her way down the bone and when she’d run out of meat she’d latched onto my sauce-covered palm. A row of her little teeth marks were scratched onto the rib. I alerted the rest of the table about what had happened and there was a good laugh. I put down my rib, turned the bone she’d been working on and handed it to her. She took it hesitantly, started to bite back into it and then went after it with gusto, even ignoring my attempts to share a little potato salad with her.

I noticed a few moments later that one of my five ribs had disappeared. The hubster couldn’t wait for a taste and had decided to dig in on my order as well. I couldn’t fault him. 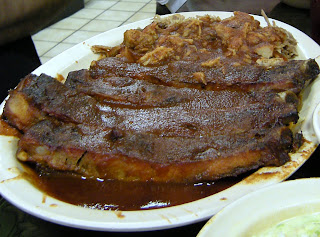 Our friend Leif (who took those great photos of Hunter) ordered up a Combination Dinner ($14.50 with choice of two of the restaurant’s barbecued meats) of pulled pork and pork ribs. The ribs were nice and meaty and the sliced pork had that nice hickory flavor a good smoking will give a pork butt. 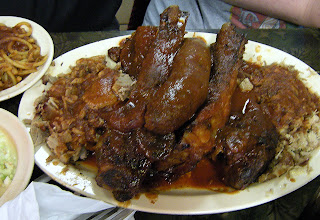 And then there was the meal that our friends Jerry and Terri decided to share… the Sampler Platter ($18.75). Billed as “A Trip To Hog Heaven,” the meal consisted of pork ribs, beef ribs, links, a bit of beef brisket and a bit of pulled pork shoulder, some BBQ spaghetti and cole slaw and beans and bread. It was… well, decadent. 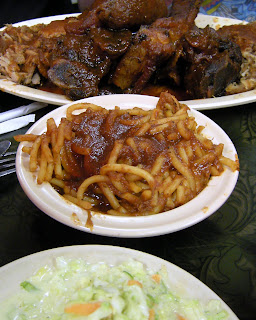 There was no way to make an elegant meal of it. This sort of creation is meant for rolling up your sleeves. The sort of dinner Wet Wipes were made for. The sort… well, you get the picture.

Eventually, most everyone was done. But I wanted to try some pie. I mean, Hunter ate part of my meal and Paul ate another part of it, and even though I’d had a decent portion of beef ribs and some of Paul’s hot links and some side items, I wanted to try the pie. It’s part of what makes me me, dontchaknow. Though the Sock It To Me cake ($2.50) cried out to me, I had to go with the pie that best goes with barbecue, Sweet Potato Pie ($1.90). I could have gone with pecan as well, but I passed. 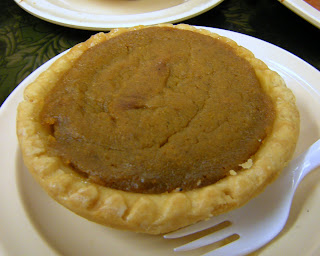 I was surprised when it came out in its own individual shell. It was creamy for that sort of pie, with a good dose of pumpkin pie spice. And it was small enough that I didn’t have to share it with anyone. Bonus!

When we were done, we took our turns standing in line at the register and checking out. It took both the hubster and I to get Hunter cleaned up enough to get her to the car, where we tackled her with baby wipes and a fresh outfit.

The barbecue at Interstate BBQ is really good. And that’s the problem, because it’s nowhere near a secret. That means unless you go at an off hour you should expect a bit of a wait. But that’s okay. Just budget a little extra time for your visit and you’ll be okay.

You’ll find Interstate BBQ at 2265 South Third Street in Memphis, not that far north of I-55. For more information, check out the restaurant’s website.
To purchase this article, email Kat Robinson at 4/08/2010 12:56:00 PM