There's barbecue sauce on my notebook. 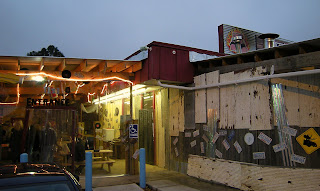 Pardon the language, but suck it, Mobile. No, I’m not upset. I’m not even slightly irritated. I’m just giving directions on how to eat that fabulous barbecue from The Shed.

Now, before you get your panties in a wad (as Alton Brown once told my husband, no kidding), you need to know something. There is no formality at this joint. No fancy-pants dinnerware, no tablecloths, no fine dining of any sort. There is beer, and a lot of it. There’s a heavy aroma of spice that hangs in the air and never goes away. And there are a hell of a lot of Christmas lights.

But if that’s all you take away from The Shed (BBQ and Blues Joint, in case you were wondering), you’re not getting the whole picture. Heck, you could spend an hour inside and not ge 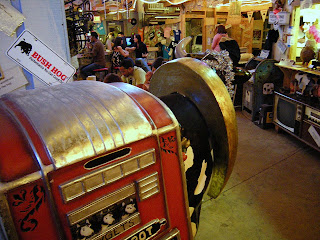 Because somehow, some way, you go in and you feel like you’ve walked into a firmly established decades old barbecue shack. There’s memorabilia from all over the place all over the walls and the bars and the ceiling and the tables. And some of those tables are… unique. You can actually sit in a hot tub and eat your barbecue if you want. 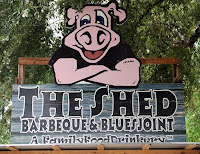 Let me start at the start. The Shed was actually started in Ocean Springs, MS -- a completely different place and restaurant. It has plenty of fame itself. In fact, it was featured on The Food Network’s Diners, Dives and Drive-Ins. That’s sorta where the Alabama place got started. Darrin and Jennifer Jasgur (pronounced like Jasper, but with a G) were expecting a little boy over 2008. She saw the show and demanded

that Darrin take her there for dinner. Sure enough, that temporarily quelled those pregnancy cravings, so the Jasgurs were on the road three to four times a week. Being pregnant at roughly the same time, I can completely understand this.

Anyway, over those summer and fall months, Darrin got to befriendin’ Brad Orrison, the founder of the original The Shed, and they came up with a plan to bring The Shed to Mobile (and considerably shorten Darrin’s barbecue quest, I’m sure). Darrin and Jennifer’s son Finn was born October 15th of that year, and the restaurant opened December 1st. There you go.

I happened to be there on a gorgeous evening in March 2010... Frankly, when I was told we were going to The Shed I was thinking about Ed’s Shed, the place out in Spanish Fort on Highway 90 that my husband and I had visited several years ago. No barbecue there. Nope, hadn’t heard about The Shed and was interested in the new experience. Besides, barbecue sounded good. 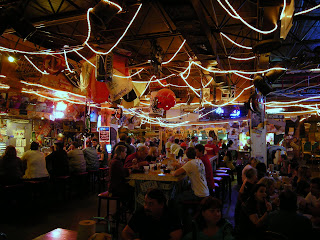 And let me tell you what… barbecue at The Shed is an interesting experience. First off, a good portion of the place is outside, except when the weather’s iffy, then it’s all inside. Huh? Yeah. Sturdy plastic curtains keep out the cold or the rain when the situation warrants. Our group walked in through those big honkin’ curtains and through to the interior of the structure. There wasn’t a table free in sight… at least, not on first inspection. That first free seat I saw was over in a corner… as I previously mentioned, a former hot tub converted to seating for four. Yeah, took me all of 30 seconds to realize the recumbent position the unusual seating placed me in was completely unconductive for barbecue eating, unless I was interested in eating it off my own chest. Went and found a booth instead. 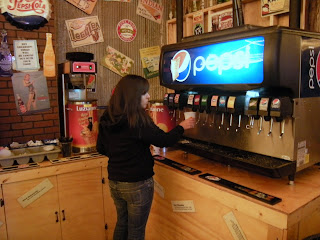 Now, if you go to The Shed, there are a few things you need to know. You go place your order at the bar like everyone else. If you get a non-alcoholic beverage they’ll give you a cup and point you in the general direction of the drink station. If you get a beer you may have to wait a minute for it or it might get brought to you. You order your food whilst you’re there… and when you’re done ordering you go sit. When it’s done, the waitress will holler out the name you have chosen to give them -- and they’ll walk in amongst the tables here and there and find you. Don’t be shy, holler for your big old Styrofoam container. There’s no dishonor in that.

And yes, it will be in Styrofoam, whether you’ve ordered it to stay or to go. The portions are big and they are soft, and sides come along, too. This here’s a barbecue joint, and you’re expected to get a little messy. Don’t fight it. 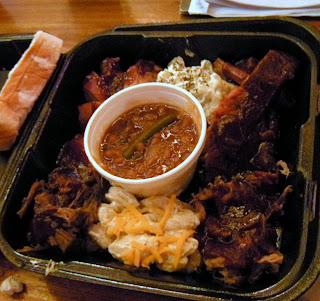 Now, back to what I told you off the top. Suck it. Seriously. My dining companions were literally picking ribs up out of their containers and sucking off the meat. It was kinda amusing. Talked with pit master Bennett and his assistant Bo, and they both told me it takes about three to four hours of good smoking with pecan wood to get them to that state. Ribs and just about everything else The Shed serves come wet (with the sauce on) -- and if you don’t like it you’d better tell them when they order because they’re not going to dry that meat off for you.

The sauce is sweet and tangy, but also thick, with good notes of pecan and brown sugar and is that molasses? But no one’s telling. It’s peppery, too, and has a nice vinegar smack to it. It’s a damn good sauce. Someone should bottle that stuff. Oh, they do.

I had myself a nice platter of chicken with a side of chicken -- darn my allergies! -- and enjoyed a leg quarter of chicken and a nice order of Chicken Wangs. Now you know me… I take photos of everything I eat. But I couldn’t this time. I took a couple of photos of The Shed Sampler Platter ($18.99) down the table but when I got my Styrofoam clamshell box I dug right in -- and while that sauce is divine it’s also sticky, and I had to make a choice to eat or take photos. And I chose to eat. I also ended up getting sauce on my notebook, but that’s a hazard for the job and no big sin. 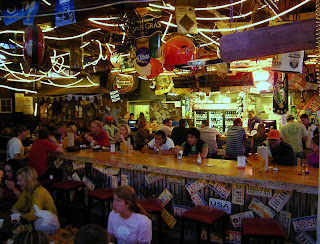 And those Chicken Wangs (getcher mind outta the gutter, boy), those nice big Chicken Wing segments, they’d been smoked too and then covered in sauce and they were just as suckable as those ribs. I really had no reason to utilize my teeth most of the night.

I also sampled the Beef Brisket… nice and dark from what I could tell, but of course covered in sauce. On its own it’s powerful… on a sandwich it’s perfect. When you get a dinner, they bring out “barbecue bread,” which is a long sesame seeded roll sliced up and thrown on the grill. It is the perfect accompaniment to any of the barbecue, and is also good soaked in barbecue sauce on its own. This is what folks in South Arkansas call “soppin’ bread.”

I was pretty pleased with the sides, too. The Mamma Mia’s Mac Salad was my favorite, nice and creamy and a bit sweet with small chunks of green onions and red onions topped with some Cheddar cheese. I could have made a meal on that, the bread and the sauce and been happy. The Daddy-O’s Creamy Coleslaw was thick and relied more on the cabbage than the mayo for flavor. And the beans… dang, can’t read that bit, there’s a smudge of barbecue sauce on my notepad. Ah, well. 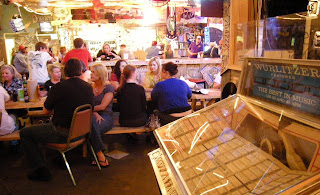 The food’s good; the music’s pretty good, too. It’s loud. You can’t have that many people in one place without there being a high volume of volume. The bands that come through just add to that. But as I said, this ain’t fine dining. A four piece string quartet would look sorta odd here.

Then there’s dessert. There’s the Nanner Pudding, which is an old secret family recipe. It’s good… really good. But then there’s the Peanut Butter Pie. I went online after my dinner date out there and couldn’t find mention of it. But regulars know. Jenn told me they make up about 100 slices of Peanut Butter Pie each morning, and when it’s gone it’s gone. And it’s nice. Summertime afternoon on the porch nice. Creamy and a little sweet and a little chocolately and a lot good. 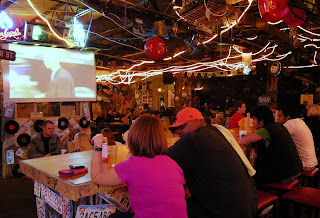 So really, how good is it? I’ll tell ya. It’s good enough to go sneaking back over there before heading back to Arkansas good. It’s put-ice-in-the-cooler-so-I-can-take-some-home good. It’s not sharing with the family when you do get home good. And for someone who’s had a whole heck of a lot of barbecue… well, there you go. In fact, right now I really wish I had another order of Chicken Wangs and a big pack of Wet Wipes. Yeah, that didn’t sound bad at all.

If you go seeking out The Shed, you’ll find it at 5753 Old Shell Road in Mobile -- at least, this location. I was told the place was established in August 2001 -- I guess that’s the original place. I was also told it took two and a half months to decorate the Mobile spot -- and I believe that. That’s on University just south of The University of South Alabama. The restaurant has a top notch website with music, too. Not too sloppy. Can’t say the same for the ‘cue, but at least for the ‘cue you have plenty of paper towels and even Wet Wipes if you need them. No shame in that.