Oh, for the love of pie. 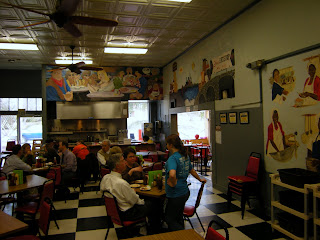 Any time I tell people I’m headed to Shreveport, I end up with a handful of recommendations. These vary from time to time and may include a bed and breakfast, an attraction, or a particular restaurant. Always -- and I do mean always -- someone asks me “have you had the fresh strawberry pie at Strawn’s Eat Shop?” And I have to answer them “indeed I have!” And their next response is “so why haven’t you written about it?”

I confess. I’ve been holding back, partly because I want to have a reason to go back again in the name of research and partly because frankly, when I go they’d better have pie. If for some reason they’ve run out, I’m blaming my readers. I’m sure you’ll handle that well. 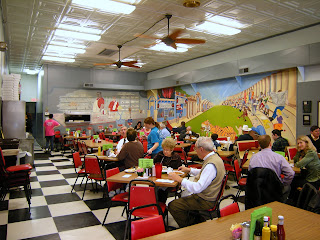 But it is time… to talk about this great little diner that’s been serving up good eating for some 66 years now. That’s no typo. The original Mr. Strawn went into business back in 1944. I have not been made privy to the details of his restaurant, or how it came into the hands of one Gus Alexander back in 1958, but the Strawn’s website will tell you Under Gus's leadership, Lula McCoy ("the fried chicken maker"), Ella Hamilton ("the pie lady"), and Gladys Duncan ("the great waitress") joined him to make Strawn's Eat Shop a success. It was during this time that Strawn's became known as a "Shreveport Tradition." 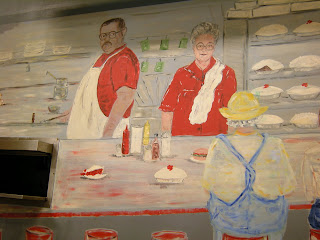 And then there were the Gauthiers, who took over in 1989. Buddy and Nancy made some changes, but the food stayed the same. Eventually their two daughter each opened up locations of their own. 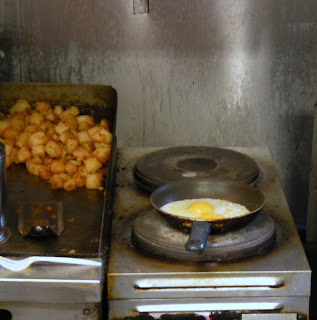 You know me. I had to find the original. And I did… back in November 2007. We went for breakfast and I got one of those great omelets and Paul ate into some hot cakes with strawberries and cream. But what was the only food I actually shot that day? The pie. Oh my. It was that impressive… Paul made the mistake of getting the chocolate pie (which I’m sure was fine, but I didn’t try it) but I got the strawberry pie and became an instant convert. 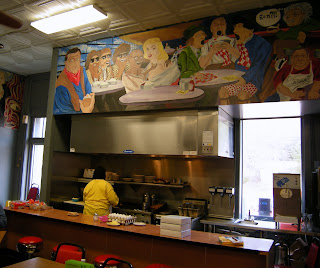 I’d meant to get back there after I got a new camera and started seriously writing about food. Really I did. But life intervened, and I didn’t find myself back in the vicinity until January of this year. I went with my mom and daughter… both of them for the first time. I’d talked up the pie… but we were going for lunch. 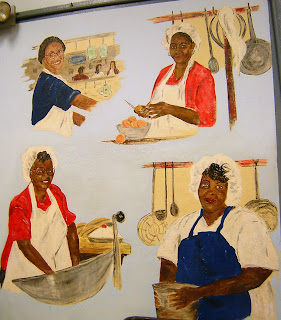 When you walk in -- whether from the front right off the street or from the back up the staircase, the first thing you’ll likely notice are the large murals on the walls. They’re a lot younger than the restaurant itself, but they’re important. At this location, there’s one section on the wall over the end of the restaurant that shows off four ladies -- reportedly the ladies responsible for the pies over all those years. Images of the owners appear elsewhere. 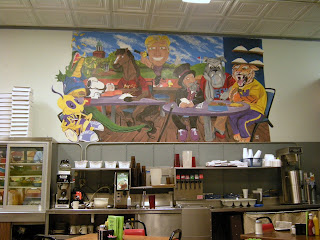 Over a drink station in the back dining room there’s one that’s a scene representing all the local college and high school mascots sitting down together for a meal at the restaurant. Over one of the two cook areas (there are two kitchens, one in each dining room) you can look up and see the likes of John Wayne, Marilyn Monroe, Albert Einstein and The Three Stooges. Everywhere you look, the art of Shawn Gillespie looks over at ya. It adds interest, sure -- it also ties the shop into the community in a unique way. I like it. 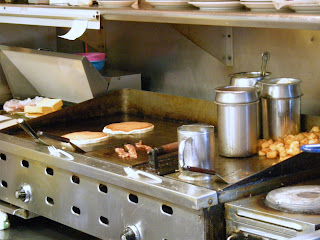 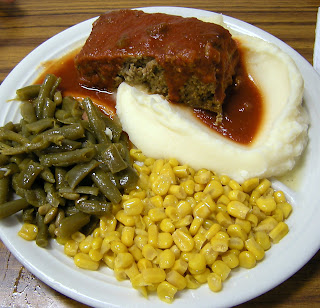 There’s a daily lunch special for $7.25, too. We were there on a Monday… my mom chose the Meatloaf (Chicken Fried Steak and Fried Chicken were the other choices) and was presented with a big fat plate full of green beans, corn, mashed potatoes and the slab of somehow juicy meatloaf. She was given a choice of three gravies -- white, brown, or red -- and went for the red that was a blend of ketchup and spices and something sweet and just perfect for that meatloaf. My daughter tried to eat her out of green beans and almost succeeded. 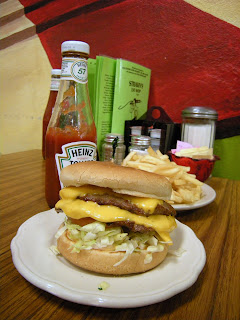 I was in the diner-food sort of mood and needed to check out the Double Meat Cheeseburger ($4.50, fries are an extra $2.25). I mean, seriously, how else can you rate a griddle without checking out the burger? What’d I get? Two nicely cooked-through patties with a thorough melting of American cheese on top just under that top bun, sitting atop a decently thick slice of tomato, a pile of shredded iceberg lettuce, a scattering of pickles and onions and a slight smear of mayo on the bottom. The ketchup was under the top bun (I had omitted the mustard). The bun was nicely toasted, and the French fries while of the shoestring variety were very crisp and still that lovely light shade of yellow they needed to be. And the ketchup was Heinz. 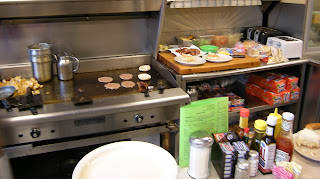 After we’d had our lunch delivered and we’d had our share, I got up and walked around to make more room for that pie. Our meals had been filling, but I was determined to be able to at least sample that pie I’d been craving for so long.

And all around us, the whole business of a well-run diner continued. Orders were called up and take out. Eggs sizzled away in skillets. 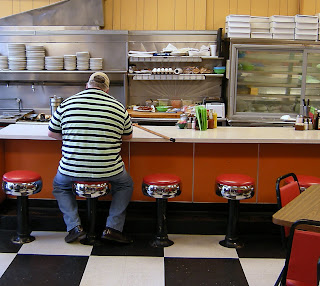 Pancakes browned on their grill next to tater tots and the like. Balls of burger meat were dropped onto the griddle and then squished down into perfect burger-sized rounds. A few regulars sat at the counter for their lunches while larger groups huddled in booths or around tables. Stories were swapped. Drinks were refilled. And orders kept getting called up for pie. 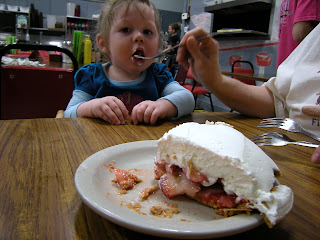 We ordered a single slice of strawberry pie (which, by the way, is $3.50 a slice or $13.75 for a whole pie) after being warned that the peach pie was out of season. It was delivered to our table with three forks -- one for each of us -- and it almost didn’t make it to the rest of it. My daughter launched herself after the confection. Hey, what can I say? She has a sweet tooth. 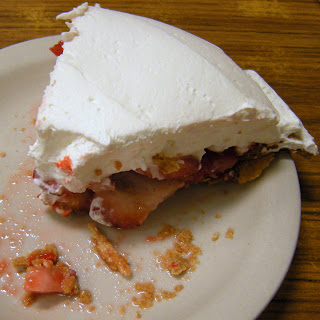 Finally getting our table sorted out, Mom and I both tried the pie. The topping is neither meringue or whipped cream from a can but a not-too-sweet delicate, creamy and cold confection that’s not too heavy but substantial enough. Below, fresh strawberries, nestled in a strawberry gel that bound the berries to the bottom crust. So fresh, yet not too tart or too sweet. A perfect summertime pie for sure, but moreso a perfect anytime pie. Pie you can have for breakfast and not be embarrassed about. Pie… that we ended up having to share with my daughter so she wouldn’t holler so loudly as to turn heads. Every bite we shared with her she crowed about, and made motion to grab for when we weren’t quick enough with the next bite.

We were thankful for the kind attention of our waitress, who never rushed us and asked a few times if she could acquire more milk for the girl child. She even brought us take-home boxes for what little remained of our meals. Much of my fries went in the box, the burger being more than I should have eaten. 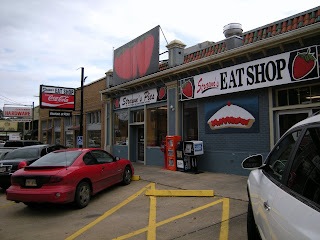 And then we were up to pay for our repast and out the door, my mom agreeing that once again I had chosen wisely for lunch. I peered back at the giant strawberries on the sign before we walked down the sidewalk and to the back of the building where we had parked.

The original Strawn’s Eat Shop is located on Kingshighway not too far east of I-49. There are two other locations now -- one at Youree and 70th in Shreveport and the other on Airline in Bossier City. There’s a website, too, with more information. It’s worth a stop in, even if you’ve eaten elsewhere already, just for that pie. You’ll think about it a long time.