Peppery Barbecue in the Backwoods. 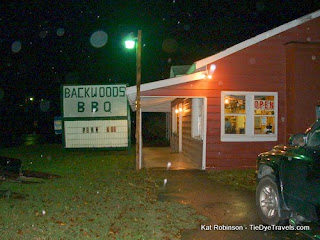 It was a dark and stormy night when my traveling companion of the day and I pulled up to Backwoods Barbeque in Greenbrier. We had planned to stop at Roper’s down the road, but when we pulled up there we were told they’d already closed down early -- because they didn’t have many customers.

Undaunted, we’d driven further in towards Conway, and pulled in to the lot of the red building by the road. We could see a lady checking out the empty tables inside, and wondered if this restaurant too would be closed for the night. Fortunately, that wasn’t the case. 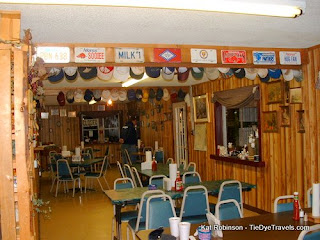 We walked in to the building and gawked at the walls. Overhead, there were a couple of beams full of Arkansas license plates and baseball hats. Pictures from Greenbrier High School lined one section. And there was all sorts of crazy stuff around. Not quite as much as what you might find at Whatta-Burger, but quite a lot -- and a bit on the cornpone side.

The waitress came over, told us to sit wherever we liked, and asked us for our drink orders. While she went to fetch drinks, we looked around... 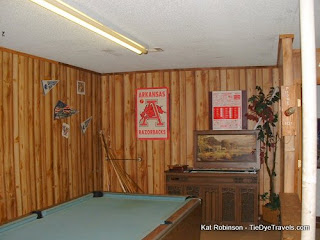 and oh holy fish, there it was -- something I hadn't seen since my childhood -- a bonafide Cabaret cabinet jukebox! It wasn't plugged in, and the songs looked pretty faded inside, but to see this marvel of discreet music enjoyment in a place like this -- well, I was mightily impressed. 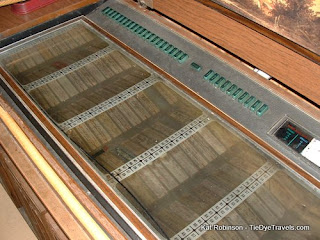 I was tempted to ask if we could plug it in, but about the time I thought that thunder boomed, and I thought it best to pacify myself with good food instead.

So my traveling companion and I sat down and perused the menu. The waitress was patient with us, dropping off my iced tea and waiting over on the other side of the room while I tried to make up my mind.

And that's the thing -- I usually have a really hard time making up my mind. But right away I saw what I needed to order. I was hungry, and there was a combo plate -- with your choice of three meats from a selection of five -- barbeque ribs, beef, pork, chicken fingers and catfish. 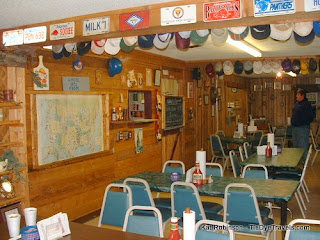 Well, what the heck -- why not? Not being able to consume pork myself, I ordered the other three options. And the sides? Oh, man... that took a minute. I ended up settling on potato salad and fried okra. 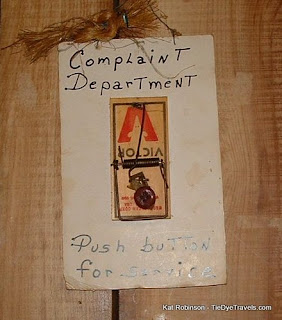 While we waited, my companion (this time my brother) and I got up and
checked out the rest of the restaurant. I was thankful for the empty seating area -- usually people get nervous when I pull out the camera and start shooting. But the rain had kept everyone else away, so I started clicking. There's an interesting Complaint Department sign just inside the door, and lots of pictures to gawk at. I figured from the resemblances I saw in the pictures that this was a family affair. 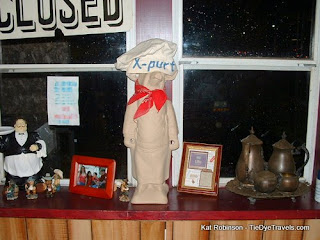 On the window ledge was a variety of items, including family photos, a farm of knick knacks, a chef pig, an old tarnished tea set, and a review from USA Today. Later on I'd read that, and disagree with some of it, but for now, not a bad display. Very much keeping up with the family theme.
There are articles up on the wall next to the register -- along with what appears to be an original menu. Maybe not too old -- it lists tea at $.79 and coffee at $.59 -- but old enough to have yellowed. And there are pictures here of the owners back when this all began. 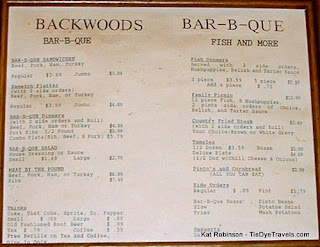 Turns out, Doug and Sharon Chrestman started this fine dining establishment years ago -- and back then, Greenbrier really was in the backwoods. Years before US 65 started getting shorter with AHTD knocking out its curves, Doug was out back, laying out the meat over hickory smoke in an iron smoker, and Sharon was manning the cash register. The waitress the night we came in told me that this wasn't the original location -- that they moved about four years ago -- but she couldn't tell me much more than that. That's okay -- I hadn't stopped for a history lesson. I'd stopped for good food. 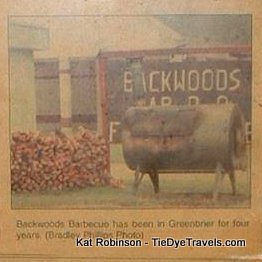 I heard the hiss of fish being thrown into a deep fryer, and started to make my way back to our table. I stopped to gawk at the big map on the wall, where there was a star for where everyone was from. Arkansas was covered up -- but there was a star in every state and in almost every Canadian province. Wow. All these people had stopped by, and this was my first visit. How'd I miss out on this before? 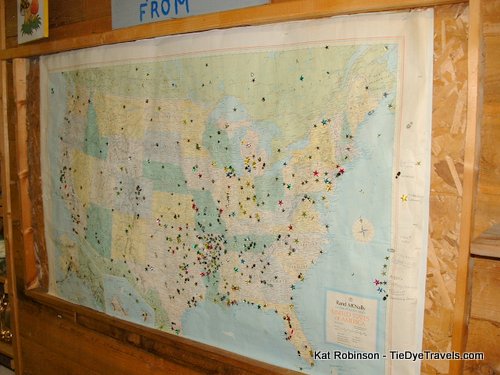 I heard the scramble of plating being done in the kitchen, and my traveling companion and I sat down. Our waitress came out with styrofoam plates and metal forks and scooted the big repast in front of us.

And here it was -- food. I was hungry, but I managed to snap shots off before diving in. My catfish was segregated off in its own little boat, but here was a lot of food. I knew I'd have a problem doing it justice. 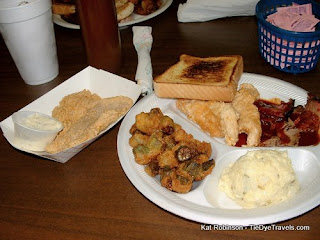 Now, I'm not a big catfish fan (there are too many bad cooks who have over-cornfloured and overcooked offerings I've eaten over the years) -- but this? This was good. The catfish was battered pleasantly with a good flour-to-cornmeal ratio, and the inside fell apart -- definately not overcooked. In fact, it tasted FRESH... like fresh-caught. No, that couldn't be the case, now could it?

But it was the brisket that caught my attention -- thick slices of brisket in an incredible and different sauce. It was spicy. More to it -- it was peppery, without having that overwhelming vinegar wang like so many other barbeque sauces do. And you could taste the smoke. Oh, goody.

And, while the potato salad was pretty much just potato salad, the fried okra was delicious. It had actually been salted before being battered (this is the biggest mistake I find with places that serve fried okra -- no seasoning!) and the batter was fine. And better yet -- the okra wasn't hard or crunchy -- just right between unsoggy and lightly crunchy without being chewy. Yum. 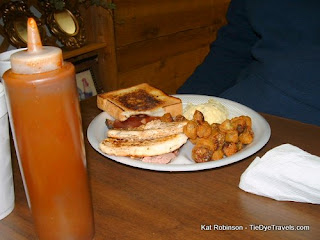 My traveling companion had his chicken grilled instead of battered, and liked it. He also tried the pork -- pink chopped bits from a Boston butt -- and said it was smooth and salty like good pork should be.

A surprise to me -- I managed to finish all of it, even the Texas toast, except for a dab of potato salad my companion gobbled up. Unfortunately, that meant no room for the cobbler -- which, I later came to find, was the one thing I shouldn't have passed up. 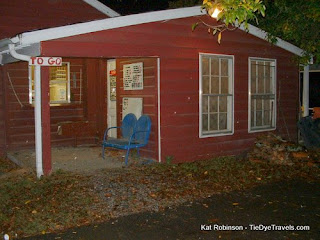 That big combo dinner only set me back $7.25 -- and with two of those and our drinks we had a fine dinner for less than $20. Not bad. Our waitress even set us up with lids and straws and refills for our journey home.

If you happen to be about that way, heading up US 65 on the 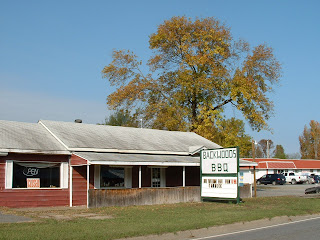 pilgrimage to Branson or Greers Ferry, drop on by. Backwoods Barbeque is located on the north side of Greenbrier, at 31 North Broadview (what Greenbrier folks call US 65). Just look for the cannon out front of the red and white building. They do take call in orders and they cater. Call (501)679-4842.
as seen in the November issue of the Little Rock Free Press

***
postscript
Alas, the barbecue is no more. On January 30, 2009, Doug Chrestman died. The restaurant has been put up for sale and a fund has been set up with HomeBank of Arkansas to help Sharon and their children with expenses. Donations can be made at any HomeBank of Arkansas location. For more information, call the bank at (501) 679-7283.
Told by Kat Robinson at 9:35:00 AM