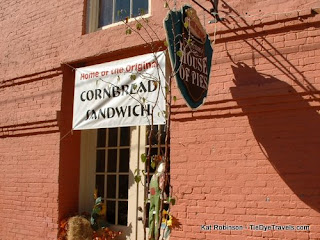 Don't be mislead by the title on the sign outside. The sign may announce this is the "House of Pies." But in so many ways, it's the house of cornbread.


Not bland, unsweetened bean-broth sucking cornbread, or overly sweet cubes that pass for corn muffins. No, I'm talking about a thin, condensed cornbread that's the essential ingredient in the must-order item at this eatery. 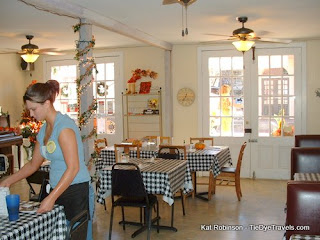 That cornbread is made by two lovely ladies, Sarah and her daughter Kitt, by hand in their kitchen at the House of Pies in downtown Jefferson, TX. Their business started with the tempting pies, but they added item after item to the menu -- and each one is an unusual delight.

Take the Strawberry-Walnut Salad. Mixed with fresh spinach and spring lettuce, with crumbled Feta Cheese and poppy seed dressing. It doesn't sound like it should all taste good together, but it melds beautifully for a wonderful light and robust salad. 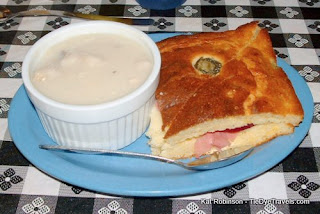 There's also the Stewp, a cross between a chicken soup and a hearty stew, loaded with chunks of chicken and sausage and plenty of spice -- a local favorite.

But on my first trip to the House of Pies, I had to try the popular Cornbread Sandwich. You have a lot of variety to go with here. There are three types of cornbread to use -- original, broccoli, or jalapeno. You can have the original with either turkey or ham with cheese, or the Irish with corned beef and swiss cheese. The Texan is topped with chili, the Redneck sports fried bologna and American cheese, and there's a vegetarian too. You can take just the meats or tell the girls to take it "All the Way" and load it with tomato, red onion, and a touch of mayo. 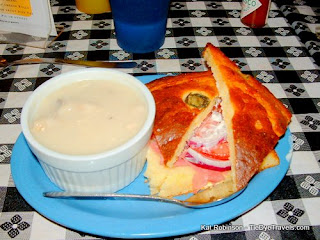 This particular Thursday, I went for the Irish with all the fixins. I went ahead and ordered it with the #2 combo and chose the chicken and dumplings to go with it. Both were served together on an oblong plate. The dumplings were firm to the touch but melted in the mouth, and their chicken stock swimming pool was thick and nicely seasoned.

The sandwich was an adventure in itself, soft and warm. I prepared myself for the inevitability of collapse, expecting the cornbread to disintegrage. I was happy to find, though, that the cornbread held well together with its meat payload. It was firm yet soft, and not the least bit grainy. Add in the salty meat, the tangy cheese, the crunch of onion and the soothing cool of the tomato, and it all quite nicely set off the jalapeno bread. A couple of drops of Louisiana Hot Sauce went well spattered on the open face.

This fine repast was served with a selection of teas -- Nutrasweet sweetened raspberry or peach tea or unsweetened tea in addition to popular soft drinks or coffee. It took about five minutes from the time our party ordered until the time it arrived. 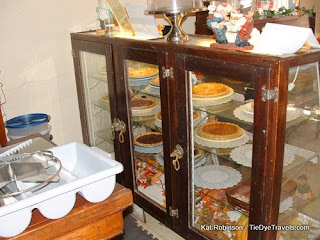 After savoring the last morsels of cornbread and dumplings, thoughts turned to the shop's titular feature. This was no easy choice -- with such selections as pecan, cherry, old fashioned apple, double chocolate cream, chocolate meringue, and Very Berry pies. I almost settled for the local favorite, buttermilk pie, but then I spotted the listing for chocolate pecan pie. I just had to try that. 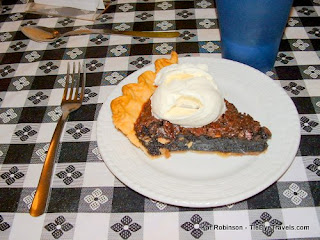 The warmed slice was served a la mode with a fresh fork. I approached the pie carefully, concerned about being overwhelmed by the sweetness. The fork glided through the edge of the pie, just like it would with a traditional pecan pie. But a taste evoked memories of really good brownies -- the one where the person cooking didn't forget that nice touch of salt to balance out the sweet. The warmed pie held bits of pecans inside its conjealed chocolate/pecan emulsion, a perfect accompaniment to the cool sweetness of vanilla ice cream. And the crust was pleasantly crispy with an almost fried element to it. No pre-packaged pie crust here. 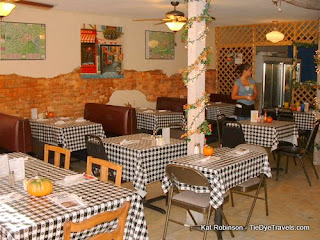 The good food won't set you back much. My combination of cornbread sandwich and chicken and dumplings set me back $7.50, while the pie ran $3.75 (plus an extra 50 cents for ice cream). 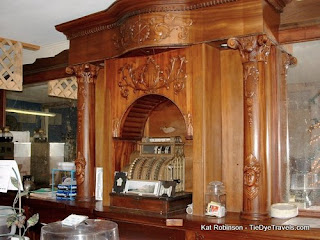 By the way, the ladies say this large barback was purchased at auction in Little Rock. It apparently started its life in New Orleans before making the journey north.


UPDATE 1/1/17. House of Pies is now Kitt's Cornbread Sandwiches and Pie Bar (there's another Texas restaurant called House of Pies elsewhere) and it's a block down the street. The menu has expanded but you can still find yourself these dishes in the new establishment.