A matter of trust and honey. 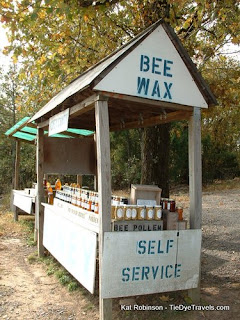 For years, I've passed through Damascus on US 65, on my way to points north. I've often wondered at the honey stand on the side of the road.

I used to just glance up the hill at the little stand in passing, the stand and the house behind it a blur.

It took me some time to realize that there was no one there. 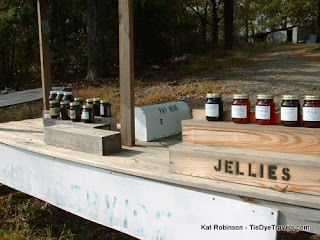 Oh, there were products, sure. But the words "Self Service" are clearly marked on the booth.

How in the world does that work?

On a late October day, my traveling companion and I decided to stop at this roadside sweet stand, to educate ourselves further about what could possibly be sold on trust. 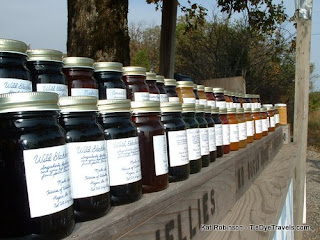 There was already a gentleman there, perusing the wares. He, like I, hadn't stopped before, and was trying to figure out if there were some sort of surveillance set-up involved. We both peered up into the trees, the eaves, back at the house -- no sign of cameras. He grunted his appreciation for the trust and paid for a quart of honey, sliding his bills into a slot on top of one of the locked mailboxes. 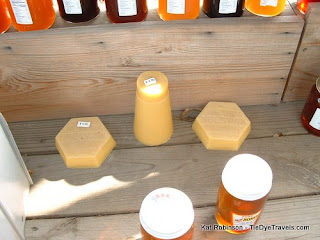 I was surprised to find more than honey. The first thing that caught my eye was a display of bee pollen, complete with "Take One" pamphlets heralding the benefits of said magical concoction. I decided to pass.

But past that, along the first table, meticulously placed, were jars and jars of jellies, jams, and preserves. Mayhaw, blueberry, blackberry, green and red jalapeno, peach, apple, strawberry, muscadine... most of these jars were from a Rogers outfit, but some were more local offerings. 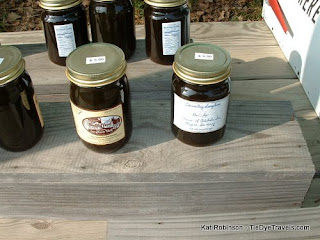 On the other table, a Southern delicacy I hadn't sampled in years -- sorghum molasses. The name alone reminds me of days in my childhood where my mother tried to share with me the joy of sorghum molasses on margarine-encrusted biscuits. I couldn't stand it at the age of six, but all these years later the taste is like a time transport. 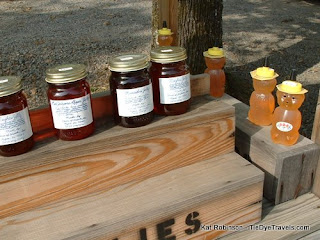 On the ledge of one of the tables, several honey bears perched precariously along the edge. Some were marked with Clover stickers, while others sported Wildflower tags. Around the back side of the jelly table were more honey-filled vessels, including gallons and half-gallons and quarts and all manners of containers. Here you could also find honey candy and beeswax.

And of course, there was the mailbox, shut with a simple Masterlock and nailed to the table. I wondered to myself how something could have survived looky-lous over the years, and how the temptation of whatever money the mailbox held could have been resisted by every soul that stopped here. 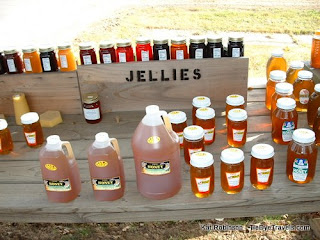 As I looked up, I was treated to something unexpected -- the colors of fall, all right here. The sun was striking the display of jams and jellies just right -- and they lit up in the colors of autumn leaves. Spectacular.

My traveling companion selected a blackberry jam, and I purchased a wildflower honey-filled bear, and we took off for our next destination -- a nearby gas station. 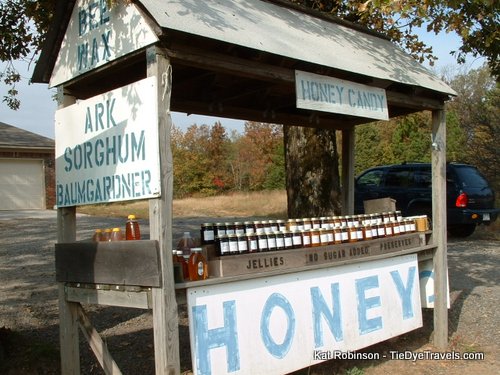 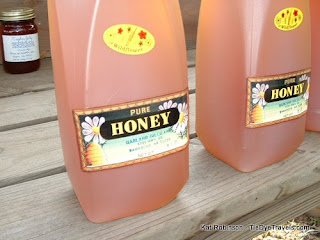 One of the old gents there told me the honey was provided by one Garland Gilliland, a septagenarian who often came out to the stand and shared details about his wares. Perhaps one of these days we'll get a chance to meet him.

You can find the honey stand just south of Damascus on Highway 65, on the west side of the road. Remember, you're on your honor.

UPDATE: Garland Gilliland passed away in January 2009, but the honey stand is still there after all these years. If you go up to the front porch, you can also buy fresh eggs out of a small refrigerator.
To purchase this article, email Kat Robinson at 11/06/2007 12:05:00 PM