The drive up to Mountain View up from Clinton through Rushing on Highway 9 is full of fast curves, gliding slopes, and gorgeous views. 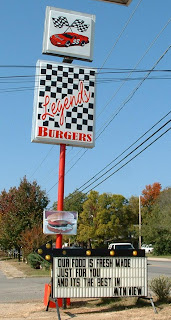 What better place to refuel than Legends?

This relatively new pit stop for burger aficionados opened in the fall of 2006 in a former gas station along the main drag through town. It's since earned its own crew of fans and friends.

On a cool November day, my traveling companion (my brother this time) and I were heading up to Calico Rock to capture fall's finest on film. After a few hours of stops, starts, and clicks, we were ready for good food.

And this stop didn't disappoint. 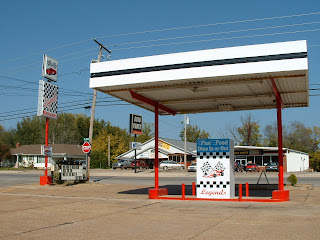 Legends was once a convenience store and gas station. But with the pumps gone and a limited amount of convenience left, a large kitchen has come into play as a place to cultivate big, fast burgers and abundant side items.

Booths line the front window, and a smattering of tables and bar stools are given ample berth in the center of the store. The decor draws less from Route 66 than from the movie Cars.

Nothing wrong with that. 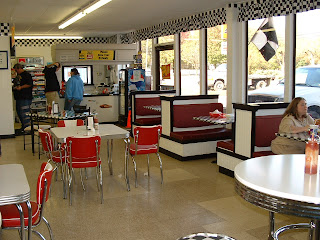 It's obviously more than inspiration for the decor. The menu (laminated sheets at each table) is packed with burgers and 'dogs featuring names reminiscent of the car racing scene -- the signature burger is the Indy 500, a lighter portion the Cart Racer, and add-ons are mentioned in the Design Shop. There's an ode to Dale Earnhardt Sr. with the Intimidator Dog, and you can eat up the Grand Prix, a chicken sandwich. Legends also boasts what it calls the best bologna sandwich you'll find in these parts, called the Winner's Circle.

Being incredibly hungry, my traveling companion ordered the Indy 500, double meat. I went for the California Speedway. Knowing it would be hard to sate our hunger, we also ordered side items -- I went for the zucchini sticks, while he chose the fried mushrooms. 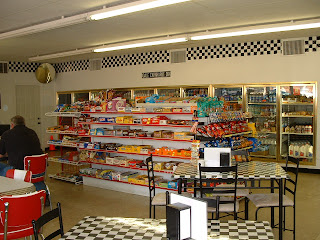 While we waited, we perused the store. A bar in the back still offers hyper-caffeinated coffee and cappuccino, while the cooler in the back is packed with a wide variety of sodas. There are chips and bread and other convenience store items still for sale here, as well as other quicky staples. You can even purchase a cold piece of cake for later.

It took a little time for our order to be processed. We were to learn that each patty is actually patted into form right before it's placed on the grill, and that none of the sides are prepared before you order. No cold fries here.

Our meals were brought out to us at the table, and this is where we found our big surprise. Neither of us realized that each patty consisted of eight ounces of very well seasoned meat.

We dug in before we could stop ourselves, and missed out on that picture of the untouched food. Apparently, our reaction was normal -- when I bemoaned the fact that I didn't capture the perfect shot, one of the regulars laughed. He told us it was absolutely normal to dig in without thinking! 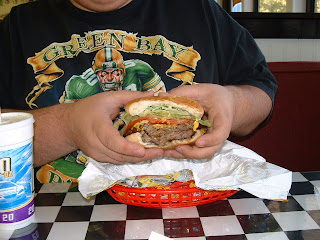 And yes, that we did. My companion stopped long enough to show off his burger before it was utterly consumed. Don't let the picture fool you -- he's a big guy. But the burger was so big, it deserved a basket of its own. Side orders are given their own baskets here. 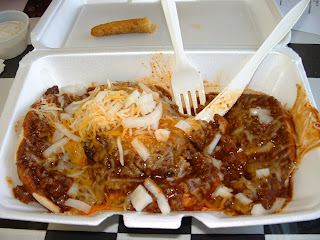 I ordered the California Speedway, an open faced chili cheese burger with onions. The fact that they actually brought it out in a to-go box told me something! The box and its contents weighed about two pounds -- two pounds of bread, meat, Armor chili, cheese, fresh onions and irresistible charm. There was no question about being opened face -- this burger simply couldn't stand up with all that chili! 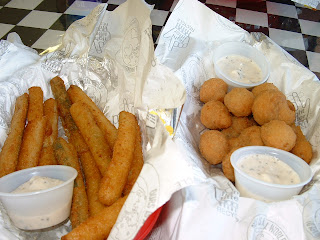 And the sides... oh, my. Everyone's eaten somewhere before where you might get six mushrooms with a fried mushroom order. Not here. Each regular side is 1/2 pound (except the French fries, which are a full pound) -- and ours included some of the least greasy, most tasty mushrooms I've ever had from a deep fryer. The zucchini sticks were crispy in the middle, crunchy on the outside, and damned tasty. The ranch dressing wasn't necessary for the taste, but did help us eat anyway -- everything was extremely hot.

Thank goodness for the free refills!

This one about did us in. I managed to eat a few of each of the side orders and about half of my burger before throwing in the towel. My traveling companion struggled to finish his burger, and for the rest of the day lolled in the truck as I sluggishly took photographs of other locations. 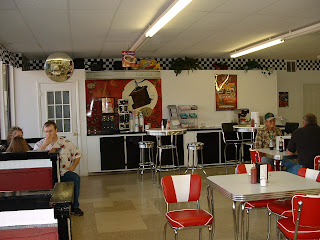 The prices at Legends are reasonable. His double-meat burger was $5.13, while mine was $5.43 -- each one had a pound of well seasoned ground beef. The zucchini was $3.50, the mushrooms $3.90, and half-size orders are available. With the Design Shop, you can also order custom burgers like the Ortega Burger (seasoned with Taco Seasoning), add sauerkraut or chili or one of three types of cheese, or top one with coleslaw or jalapenos or bacon. The hotdogs and corndogs are also "Legend-ary." 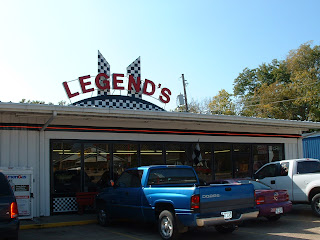 You'll find Legends on Highway 9 about three blocks after the highway makes that sharp right coming from the south, on the right hand side of the street. It's located at 401 East Main in Mountain View. For more information, call (870) 269-7510.
Told by Kat Robinson at 7:04:00 PM