All the lovely lights... a holiday dream on Cane River Lake 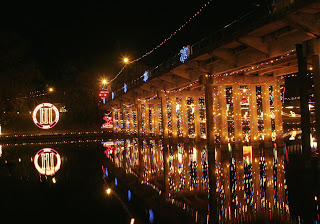 Natchitoches, Louisiana is, for many travelers, a waystop between Shreveport and Alexandria on Interstate 49. For others, it's the setting of a favorite movie, Steel Magnolias.

But during the month of December, it becomes something else on Saturday nights. It becomes a lighted wonderland on Cane River Lake. And it's pure magic. It started small, some 80 years ago. Back in 1927, employees at the city's utiity department wanted to give residents a gift. It had to be something memorable. 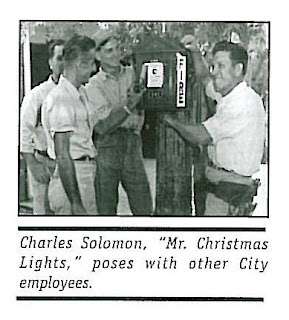 They came up with an eight foot tall lighted white star -- and placed it downtown for everyone to see.

There are a whole lot more lights now! 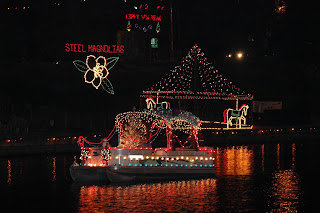 I happened to be on-hand on November 17th, the unofficial start to Christmas in Natchitoches. The evening was a bit drizzly, but hundreds of people had already started finding their place to park when the group I was traveling with came in. 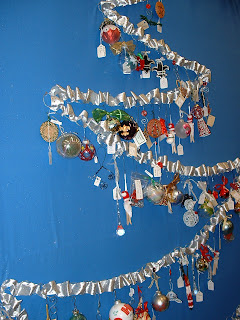 We visited the Natchitoches Art Guild, where an artist reception was underway. The Art Guild is a neat project. It's a gallery where the art is on sale -- and the proceeds go right to the artist. On one of the display walls, artists had contributed Christmas ornaments; unique little pieces that don't cost a lot and add something completely unique to your tree. There were paintings and ceramics on display, and even a kiosk of greeting cards designed by artists. A resident artist was on-hand to answer questions about her work. 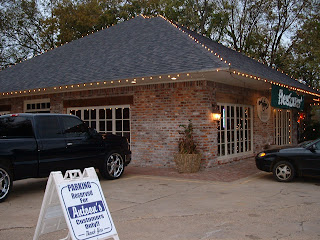 We had dinner at Antoon's before the festivities began. Antoon's is known for a lot of things -- and good food is definately on the menu. My traveling companion (my husband, this time) and I both went for the same sort of menu.

The helpful staff brought out platters of assorted hor d'oeuvres, including the ever popular fried green tomatoes and fried mushrooms. The tomatoes were perfectly fried -- a little cornmeal in the batter, crispy on the outside and firm and tart within. They went well with the ranch dressing. They came on a big plate 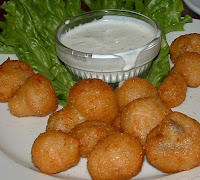 with fried crawfish tails, fresh fried catfish, and something complete unique to the area -- Natchitoches meat pies, full of andouille sausage and shrimp and lots of spices.

The fried mushrooms were full of flavor, with a batter that didn't include the cornmeal. They were a quick munch as the plate was passed along the table. 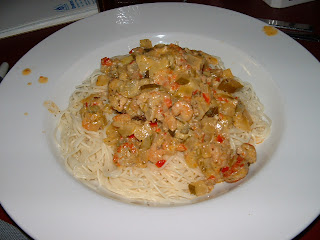 And then the main attraction arrived -- big plates of linguini topped with a healthy-sized crab cake. Of course, that wasn't quite enough, so the big crab cake was topped with an even bigger pile of what was called sauce but actually was a creamy stew of crawfish tails, shrimp, trinity (celery, onion, and bell pepper) and spices -- like a very thick seafood gumbo. Every bite had a story -- the sweetness of crab, the meatyness of the crab cake, the firmness of the shrimp, the slap of spices at the end. The pasta was the perfect accompaniment -- a peaceful sidecar for spicy goodness. 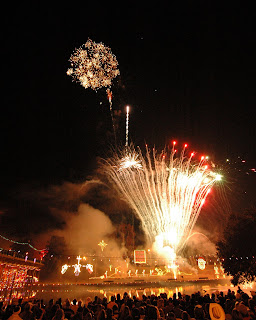 After dinner, we moseyed outside to the riverbank for the grand presentation. The lights weree about to come on, and we were all excited.

But they don't start with just a flick of a switch. That flick is accompanied by one of the best firework displays I have ever seen. This year's musical celebration of light is accompanied by the sounds of Mannheim Steamroller, with a flourish at the end by the Trans Siberian Orchestra. 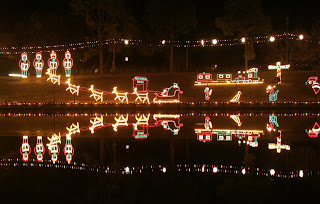 When the music begins and the first scent of explosive powder fills the air, the lights all come on along the river and through downtown. There's a ceiling overhead from a veritable spiderweb of lights, criss-crossed in symetrical wonder with hanging bits of Fleur de Lis 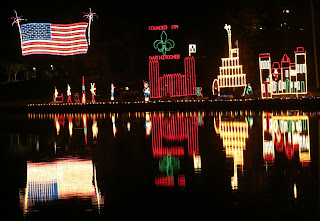 and stars. The riverbank boasts representations of the area's history, along with the prerequisite sights of the seasons.

We had been expecting 5-10 minutes of fireworks and music, but half an hour later we were still catching our breath as each round of 'works grew grander and grander.

And in-between the music and the blasts, an audience that stretched several city blocks fluctuated between the silence of awe and the happy applause and cries of joy. It was indeed a sight to behold. 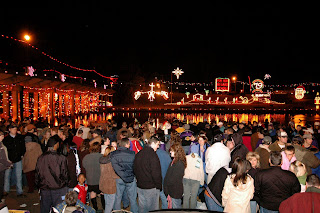 But this isn't a singular occasion. From the November 17th ceremony through New Year's Eve, the lights stay on. And the firework show is repeated every Saturday night. 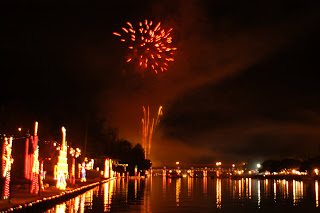 This Saturday, on the first of December, the town will expand from being a riverside burg to a major metropolis. Some 100,000 people are expected to come into town for the Christmas Festival. The day will be filled with all manner of family entertainment, and the night will be filled with lights. Folks who have been to the festival in the past have told me that there are times when you are literally man-to-man-to-man, standing shoulder to shoulder in the majesty of the light show. But every one of them says it's something they wouldn't miss for the world.

And it continues on through the month of December. There's always a Candlelight Tour of Homes the second and third week of the month, and of course festivities throughout. 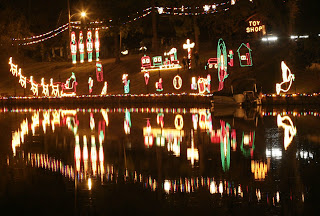 Interested in going? Better check out the details first. You can find more information about the Festival of Lights at the Natchitoches Area Convention & Visitor's Bureau website or call them at (800) 259-1714.

And it's part of a bigger neat event -- the Holiday Trail of Lights. Six towns -- Jefferson, Marshall, and Kilgore, Texas and Shreveport-Bossier City, along with Natchitoches, participate. Check out all the info at the website. 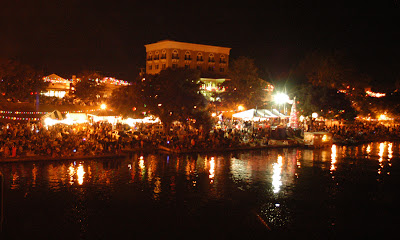