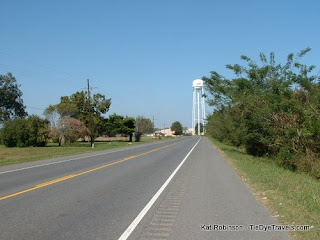 For years, travelers along US 65 heading south to Tallulah have passed by the tiny burg of Transylvania. Truthfully, there's not much to Transylvania -- just an empty elementary school, a nearby prison, a cotton gin, a small community and the Transylvania General Store. Many have stopped in at the General Store for gas or a cold drink under the bat adorned water tower -- and they've discovered a cultural rarity.


But they've also discovered Transylvania's darkest and most edible secret -- the biggest and best burgers to be found along US 65's North Louisiana corridor. 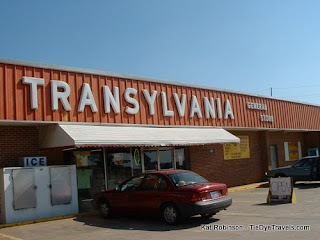 I discovered the great burger about six years ago on a trip back from Jackson, MS. My traveling companion and I hadn't had much to knosh on for breakfast -- the hotel offerings were limited to corn flakes and creamer (no milk!) and we were hongry. We were holding out for Lake Providence and the promise of po-boys at The Dock, but the rumbling in our tummies lead us to pull in early.

And we were surprised to find more than just a general store. Here, you can find fertilizer, diapers, a meat counter, knick knacks, and Aspercreme, all within a few short aisles of each other. But more important, you could find your way back to the counter and order yourself a burger.

Sure, there were other offerings -- fried chicken, pork chops, turnip greens, sausage gravy biscuits. But the burger listing was incredible -- and we were to find, the burgers themselves were quite impressive.

Because this was where you found the Double Dare Outrageous Burger.

That's not to be confused with the double cheeseburger or any of the other available meat-on-a-bun combinations. No, the Double Dare Outrageous Burger was more than a man could eat in a sitting -- or two men, for that matter. It was a thing of beauty -- and for the reasonable price of $10.90, it came with fries and could feed a family of four.

And there was no doubt where the meat came from -- because to create the incredibly large burger, one of the counter girls would yell across the store, and the meat counter guy would bring over a hunk of ground beef in a rubber-gloved mitt, on a styrofoam platter, to be taken and seasoned with just salt and pepper and thrown on the grill.

We learned over the years that if we stopped for lunch, to bring a cooler -- we'd order one burger, cut it into quarters, each munch on a quarter and stick the remaining half in its clamshell box carefully taped up right inside. It was a meal that kept on giving. 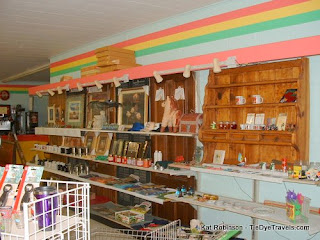 The Transylvania General Store had its other delights, too. For one, there were tons of souvenirs -- lots of magnets and aprons with gumbo recipes and notes on how to make the perfect praline, Panola pepper products, T-shirts and coffee mugs that proudly proclaimed you'd been to Transylvania (LA), and oddities of every sort. Just enough stuff to draw your interest while you waited on your burger to cook. 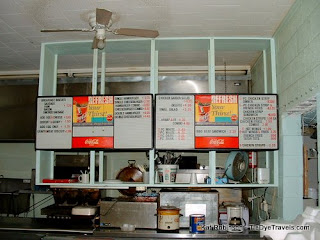 Sadly, though, you can't get the Double Dare Outrageous Burger right now. On a visit in late October, we found the counter quiet in the back. The menu now just lists simple eats like single and double burgers and breakfast biscuits. And it isn't open on Sunday.

Turns out... this was a dream... a lovely dream that lived for several years because of a family from Michigan. A young couple fell in love with Transylvania and moved down. The woman was a teacher at the elementary school -- and she and her husband and her father bought the General Store back in 1999. 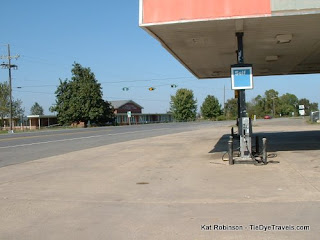 But then the school closed down, and the daughter and her husband moved to Pennsylvania. Her parents continued to run the place with love and care -- but recently her mother passed away, and now her father is selling the business.

That man is 75 year old Moses Bender. I talked with him in the quiet store. There were still items on the shelves and lots of souvenirs, but the meat counter is dark and there's nothing cooking on the grill today. He says he loves the place, too -- but it's too much for one man to do. Besides, these are his golden years. He has three daughters and 11 grandkids and they're a thousand miles away. And maybe, just maybe, someone might come along and live their dream here, too. 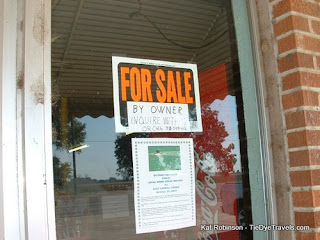 So the Transylvania General Store is up for sale. I didn't ask how much he was asking for it, but I took down the number -- (318) 559-4811. He told me there was one guy interested in buying it -- but that if that sale goes through, the lunch counter will close for good. And that's a real shame.

Mr. Bender did tell me that the Transylvania General Store has been there since 1958... and hopefully whoever takes over will continue the tradition. He says it's always been clean and a good place in the community, and that it doesn't sell tobacco or alcohol. A real family sort of place, if you know what I mean. 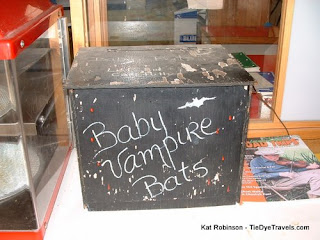 Besides -- someone needs to care for the baby vampire bats.

No -- I wasn't kidding. On the counter just inside the door, a black box contains something remarkable and unusual to the area -- something you just don't find every day. Any given day, you can drop in and visit the baby vampire bats. 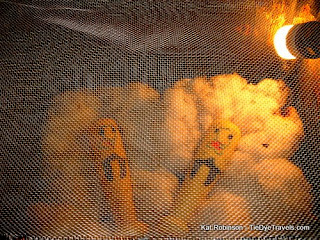 Just be careful. That's what the screen is there for.

You can find the Transylvania General Store in the big curve through town on US 65 between Tallulah and Lake Providence. Hopefully, it will still be there when you go.

Email ThisBlogThis!Share to TwitterShare to FacebookShare to Pinterest
Labels: Transylvania