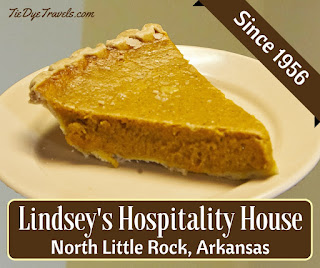 In Arkansas, pie with barbecue is just a standard, expected dessert. At Lindsey's Hospitality House in North Little Rock, it's the pairing of two beautiful creations side-by-side. 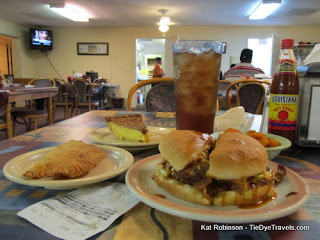 A few weeks ago, an old friend of mine traveling through the area asked me for a great local food joint that was cheap but wonderful and which represented Arkansas food well - and which needed to have really good fried chicken. When it comes to answering that question for a Saturday lunch, Lindsey's immediately came to mind.

The original Lindsey's Bar-B-Que opened in 1956. The creation of D. L. Lindsey, it was a nice little barbecue shack with a great following. In 1989, the restaurant reopened as Lindsey's Hospitality House at its current location, a block over. Originally just a lunch joint, Lindsey's popularity grew and so did its hours. Today, the restaurant offers up dining and catering and you'll find that great smoked pork, beef and chicken everywhere at local functions. 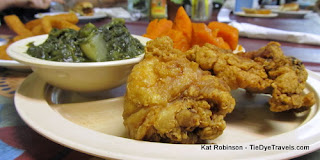 Chicken.  Man, Lindsey's does some great chicken, and their fried chicken is particularly memorable. White meat is offered for 50 cents more, but don't go there.  Go for the rich, thick and meaty thighs wrapped in that thin and crispy almost orange batter.  Suck it off the bone.  Dip it in Lindsey's somewhat thin, somewhat peppery sauce and let it dribble on your chin.  I'd claim this easily as one of the top five fried chicken joints in central Arkansas. 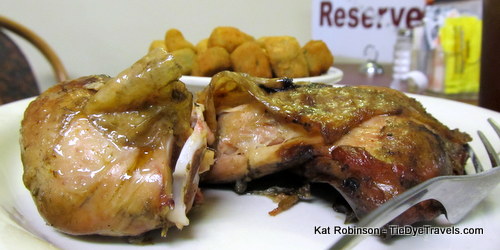 But getting it smoked is also a bonus.  Let's face it, anything that goes into the smoker at Lindsey's is going to come out glistening, sweating and lightly smoky.  It's marvelous. 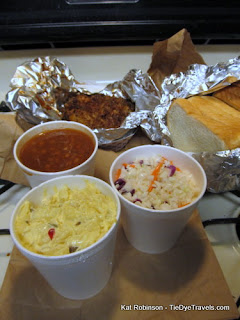 Lindsey's has its own good measure of sides, and doesn't limit to the trinity of beans, slaw and potato salad that the other joints around here seem so stuck on.  Mind you, it does all three well -- pork-n-beans in a slightly tangy sauce that's not too thick, mustardy potato salad and a substantially firm and slightly sweet coleslaw that makes for a good condiment. 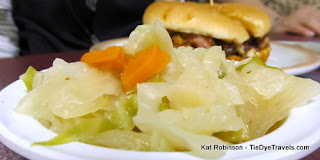 with minimal batter.  The mac and cheese... well, it's mac and cheese.  The steamed cabbage with its bits of carrots is spot-on and good for you, too.  Pinto beans without barbecue sauce are an option, as well as firm fried okra and mixed turnip and mustard greens stewed up by someone who knows what they're doing. 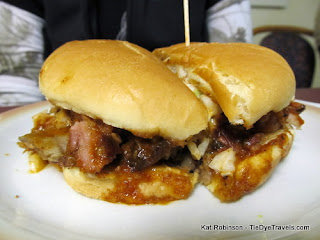 But folks tend to go to Lindsey's for the barbecue, even if barbecue isn't in the restaurant's name.  All the favorites around these parts are offered - chopped beef and pork, hot links, pork ribs, smoked chicken.  You can get a sandwich (yes, even with the ribs, better watch 'fore you bite down) or a plate and whatever you get, man. 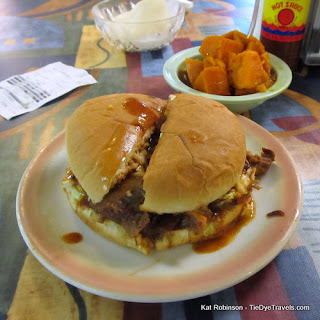 I'm loving on the beef barbecue sandwich, like I tend to do.  If you don't like slaw, you better tell the lady at the counter not to put it on, because it's considered a necessity. It provides the bite you need for a sandwich.  I suggest two things to you, though - when you get your sandwich, turn it over with the slaw side down, because otherwise that bottom bun is going to disintegrate on you something quick.  The other thing, you better eat quick because even turning it over, it's going to fall apart. Forget it.  Get a fork if you're embarrassed.  Hold that sammich over your plate. There you go. 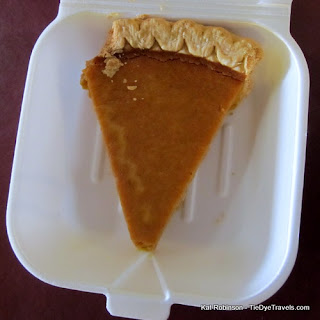 The thing that brought me to Lindsey's the first time and what keeps bringing me back are the pies, because pie. Or pies... because there are so many at Lindsey's - and the selections are noted on the board each day.  I have declared the sweet potato pie there one of the best I've ever had, and there's a reason for that.  Unlike similar options at Say's and Sim's, the golden orange sweet potato pies at Lindsey's are firm and have a substantial texture and they taste syrupy and pure - not relying on heavy spicing to show off the sweet potato's distinct flavors. 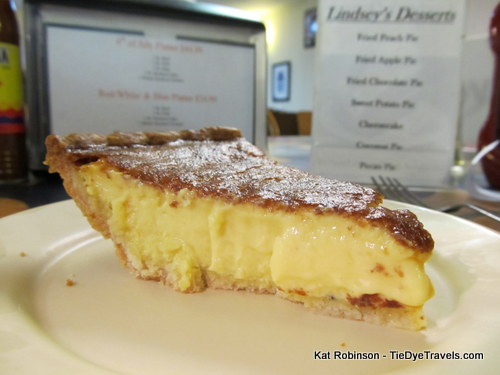 The egg custard pie is humble yet speaks to my gullet in a comforting way that makes me feel both redeemed and guilty after I consume my slice. 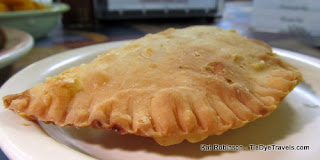 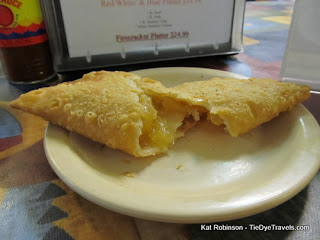 for that pie to be warmed up before it comes out because THAT makes all the difference in the world.

Do be warned - if you have white cloth seats in your car, put something down before you pick up a pound of meat to take home.  There's no fancy wrapping for that 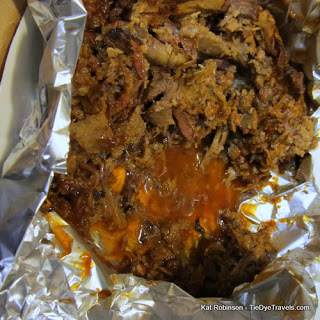 barbecue beef or pork, just aluminum foil, and that package will start sweating its grease before you leave the store.  But that doesn't matter.  Get it home.  Plop it on white bread.  Add coleslaw and sauce.  Consume.  Repeat.  Hope you weren't wearing your Sunday best.

You’ll find Lindsey’s Hospitality House at 207 Curtis Sykes Drive in North Little Rock, a couple blocks off Main Street. It’s open 11 a.m.-6 p.m. Monday, til 7 p.m. Tuesday through Friday and until 8 p.m. on Saturday. Like all good family barbecue restaurants in the South, it’s closed on Sunday. For more information, call (501) 374-5707 or check out the website.