Pickin', Grinnin' and Toe-Tappin' at the Front Porch Stage in Mt. Ida. 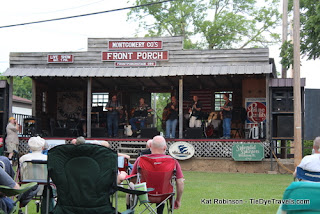 Love good music? Head to Mt. Ida and bring your chair with you to the Montgomery County Courthouse Lawn any Saturday between now an October to enjoy the sweet sounds from the Front Porch Stage.

For the past 14 years, the Stage has seen the likes of country, Southern rock, bluegrass and gospel groups who come to share their tunes to a relaxed crowd of locals and visitors… and it’s absolutely free. 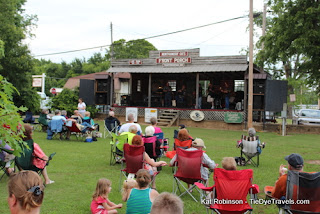 The idea for the project came from Mike Adams, who organized musicians to come play on the courthouse lawn, back in 1999. Once the Chamber of Commerce got on board, the search began for funds to purchase a sound system and stage. The winter of 2000, the town was struck by an ice storm that damaged power systems through the region. Electric crews from Carolina Power and Light and Florida Power and Light came in and spent six months repairing downed lines and connections. They received such a warm reception from the citizens of Montgomery County that, when they left, they donated a $5000 sound system. 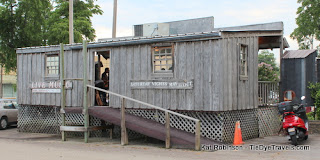 Gerry Babbitt, the technical director for the project, went searching for a flatbed trailer on which to build a stage. Most of these ran in the $5000 range, which Mount Ida just did not have. Babbitt did find one gentleman who had a flatbed for sale but could not budget on that price. However, when told about the project, he directed Babbitt to another option – an old mobile home that had been converted to use as a stage for performer Kitty Wells. Babbitt negotiated with the owner and had that stage brought to the courthouse lawn.

After a short period of time as an open stage, a crew worked together to make the stage into a front porch worthy for pickin’ and grinnin’ upon. Walls and a tin roof were added to the 16’ x 24’ from a plan scratched out on a napkin by Babbitt and fellow Mount Ida resident Bill Ray. As work went on, whenever something was needed, someone from the community donated it, making it a truly local effort. 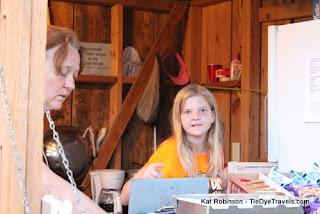 Attending concerts at the Front Porch Stage is completely free. It’s funded by a concession stand that’s on the other side of the courthouse lawn. Those concessions and other fundraising efforts are handled by Possums Unlimited. The rumor is, one of the original organizers had a 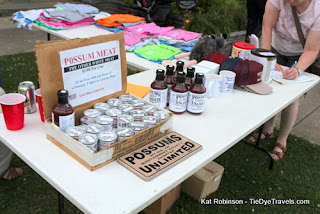 joke played on his wife, where she was delivered a sash designating her the Possum Queen along with a tiara and a fox stole. The idea caught on, and many fundraising efforts are based around the ideas of possums.

And the atmosphere is always relaxed and family-friendly. 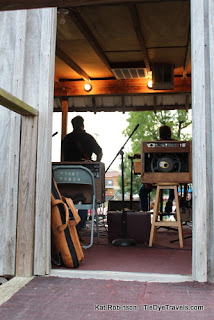 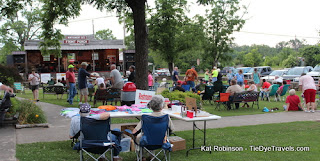 If you’d like to see the schedule for the Front Porch Stage, check out FrontPorchStage.org. All shows are on Saturday evenings and start at 7 p.m. Bring your folding chair or a blanket to sit on, and feel free to bring the kids – it’s absolutely free.
Told by Kat Robinson at 8:55:00 AM