A Tommy's Pizza Is Worth A Significant Detour. 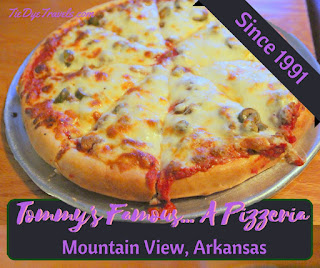 When I was young and inexperienced, I could not imagine a single food item worthy of a major detour.  After all, it was enough just to get out and try a place from time to time.  If I wasn't on the way to some place, I seriously had to consider whether it was worth it to drive X number of miles for a meal.

But then I tried Tommy's Famous... A Pizzeria, and that went out the window. 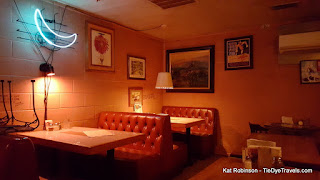 Since then, so many times over the years, I'll find myself in Ash Flat or Viola or Mountain Home or Heber Springs and think "Tommy's isn't that far out of the way.  I need a Tommy's pie," and I'd drive some convoluted route to get to town and dine in one of those really dark, peachish-orange booths.  So many times. But why? 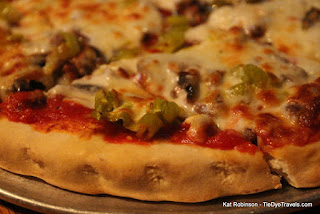 I could say part of it was Tommy.  I'm going to paraphrase what I wrote about Tom Miller in my second book, Classic Eateries of the Ozarks and Arkansas River Valley. 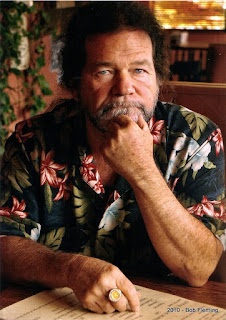 Tom Miller knew Elvis.  I don’t mean he met him happenstance.  I mean he actually worked security for The King in Vegas, baby, all those years ago.  “The groupies scared me,” he mentioned one night as we were paying up.  “A lot of folks say it was Elvis and all the people around him that were scary, but what was really scary were those fans.”

There’s a novel to be written about how little Tommy Miller made it from being a young boy who visited the Mountain View area in between Eureka Springs and everything else during his summers as a child, and what got him out to Las Vegas.  Along the way he had a sojourn in Skokie, a suburb of Chicago, and a short stay in Taylor… which even Grav describes as a “damn scary place.”

I wish Tom had written that novel.  Unfortunately, that never happened.

He decided to start a pizzeria in 1991.  By this point in time, he'd settled in Arkansas's Ozarks in the Mountain View community, where the water is clean and the world is quiet.  His little pizza joint in an old house just west of the downtown square became one of those places you knew to stop at before you left Mountain View.

He was a lion of a man, and he would growl when he talked, a friendly growl, as if he were some version of the Not-So-Cowardly Lion.  He called a lot of people "kid," though somehow I was always referred to as "girl." 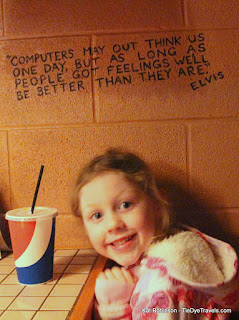 Man, all the times I've been in there... like President's Day in 2014.  Tommy grumbled at me about the photo that was in the book, the one my editors chose.  It's the last image in that book, and I hadn't noticed they'd just shown some hands throwing a pie in front of a Dr. Pepper sign instead of something that actually made sense.  But he grumbled about it happily.  We talked about a Canadian TV fellow I'd sent to him for a travelogue.

There were times we eeked in right before closing, and times we'd get there at lunch and kick our own butts about it (Tommy's opens every day at 3 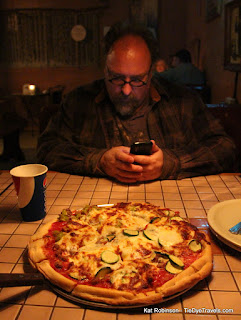 p.m.).  Until recently, it was a cash-only joint, and there have been runs to the ATM and days where we'd count out what we had in our pockets and socks to make sure we had enough.

Well, no.  There's nothing like a Tommy's pizza, not around here.  No one else combines that sauce and that cheese and that crust and takes the time to make it right, sliding it into a hot oven on a paddle, these days.  No one else has the confidence to tell people to sit down and be patient and 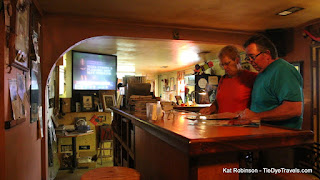 wait 20 minutes for a pie to come out.  Locals know you don't go to Tommy's for fast food, because unless you want a Coke you are just out of luck.  It's done when it's done.

Tommy's does barbecue and it's all right, but if you 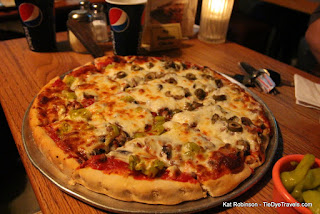 go to Tommy’s and you don’t want pizza, well, I can't help you.  A calzone is acceptable, but what you really want the full pie.  The Detroit-style crust, slowly baked.  The thin Chicago-style hybrid sauce free of any chunks.  The thick yet stringy cheese blend.  It comes out as molten lava, and if 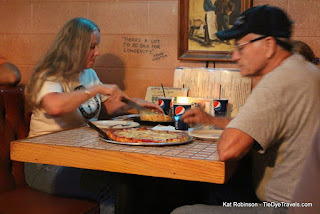 you're getting yours to go, you need to make sure not to shift it or you'll end up with Mount Cheese on one side of the disc. And unless you ask for something special, you will get your pie cut in squares.  And that's fine. 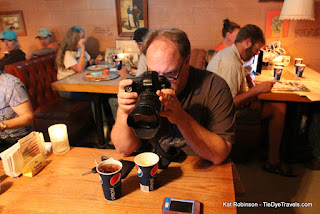 Which brings me to our latest visit. Grav and I had worked our way from Eureka Springs to Viola, taking care of business along the way.  As we were getting ready to head back to Little Rock, we weighed our Sunday night choices -- go by way of Ash Flat and Batesville and Bald Knob to reach Highway 67-167 and the route home, or take a while longer and head to Mountain View?

One mention of Tommy's and our route was set.

We whistled through the curves and hills through Pineville and Calico Rock.  As soon as we had cell service we called to make sure Tommy's was open.  But the answer?  Only for the next ten minutes. It was nearing eight.

Grav dejectedly ended the call.  Then it hit me.  Take out.

We called back and ordered our favorite pie (beef and green olives, half pepperoncini) and rejoiced.  Yes, that was cool.  We rolled on into and through Mountain View and made it right before the clock struck eight. 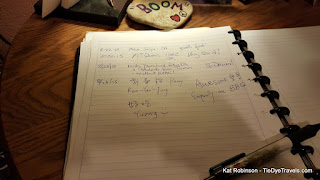 Of course, we had to wait, and that was OK.  We read through the guestbook... the last visitors were apparently from Korea! and looked around.  Nothing has really changed at Tommy's, except now there's a big photo near 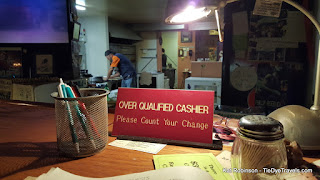 the door by Bob Fleming from several years back.  The family hasn't done a thing to the menu.  It's still as comfortable as it ever was.

It took a little while, and others came in to pick up calzones and pizzas to go.  At one point, the sole pizza guy behind the counter lamented that at this rate he would never go home, but he kept on taking those orders all the same.  And the place smelled like tangy pizza, bread, a little barbecue.  We didn't mind the wait. 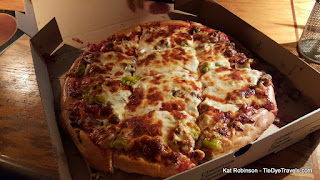 That is, until we got our pie.  Once photographed on the bar, we grabbed a handful of napkins and the proffered tub of parmesan cheese and retreated to the car, where we hadn't even gotten our seatbelts on before the box was open.  I actually 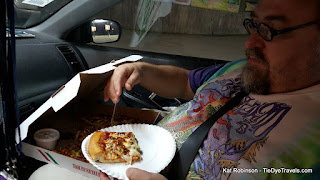 pulled away a corner for want of the flavor, cheese dripping and dangling everywhere.  It was then that we realized we hadn't ordered drinks, so down the road we went to Sonic, and once our drinks were ordered we started pulling away the 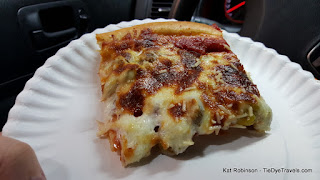 slices, devouring those squares right out of the box onto paper plates, licking our fingers and laughing.  The carhop who brought us those drinks looked a little confused.

Stopping was hard, but eventually we had to go, with home so far down the road.  Was it worth winding through roads full of construction in the middle of the night?  Yeah.  Was it worth arriving home after midnight?  Sure.  And the last of that pizza was claimed before noon.

Tommy's Famous... A Pizzeria is not fancy food nor is it fine dining.  But it is unique, a flavor that I've only encountered one place.  And you need to try it. 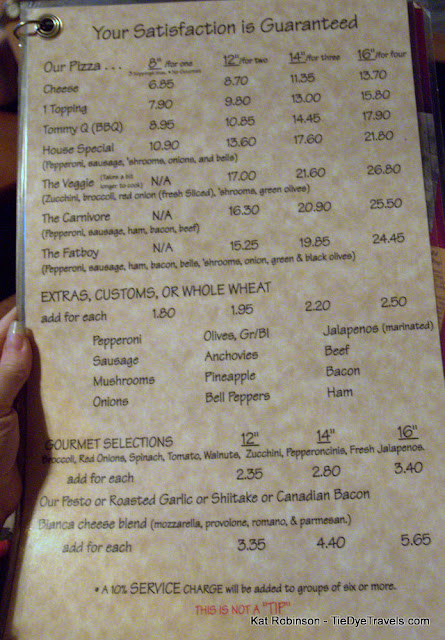 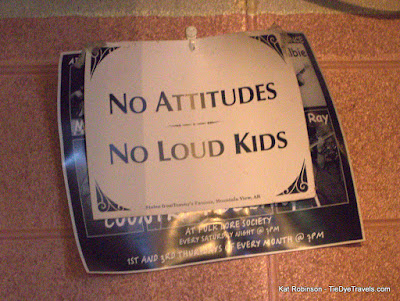