Dinner and a Show at Loree's Cattleman's Restaurant in Green Forest. 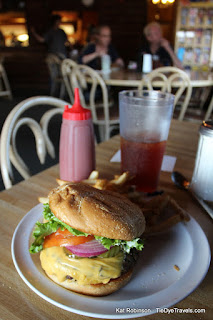 Country music and country vittles go hand in hand, or at least they should.  So many of our steakhouses, catfish houses and country fried joints all across Arkansas and the Mid South pipe in the tunes of the greats of country music.  But few of them offer live performances, and even fewer offer that live entertainment for free.

Of them, Loree's Cattleman's Restaurant in Green Forest is a real gem.  The Cattleman's Restaurant has stood since 1958, as part of, I kid you not, a sale barn.  It is truly a local gem, with clientele that usually seems restricted to people who all know each other. Everyone really does seem to know everyone by name. 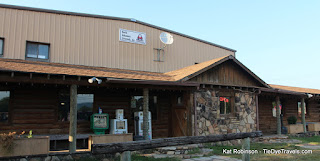 When I pulled up, two young boys were playing on the front porch with toy guns.  One of them noticed me coming up and opened the door for me, as the other one cried "gotcha" and kept firing at him.  The first complained 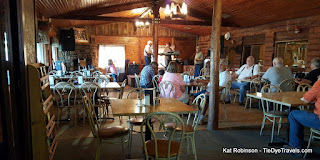 "I'm bein' real nice!" and I smiled and thanked him.

Inside, the rough hewn log interior was about half full of people all intently staring to the left.  That's where a low stage crossed the building, and a curly haired lady was playing an electric piano.  That lady is Loree Pound Blackburn. She and her family bought the place ten years ago, and now if you're lucky, you can come in and watch her sing.

Loree was born into a show family of ten children who were all raised in Texas. Her father, Tom Pound, was a voice and music teacher who took her, three of her sisters and her mom out traveling the country, performing shows and doing evangelistic work as the “Six Pounds of Music.” They eventually settled in Eureka Springs, where they had a show for years. After Tom died, Mama Jane and the sisters continued to perform. And now Loree has Cattleman’s Restaurant.

Loree's not just a singer, though. She also cooks and waits tables and does all the things you need to do to keep a restaurant running.  She and her husband and kids keep the place going. 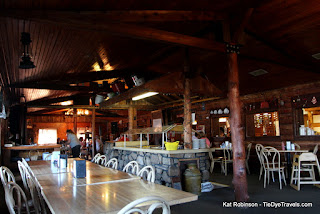 This particular Saturday evening, I walked in, looked around and spotted the salad bar.  Not wanting to take up one of the larger tables up front, I grabbed one in the back and watched the crowd, who listened intently everytime Loree and her two accompanying band members, both named 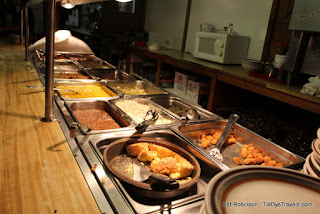 There was a massive buffet in the back with hamburger steak, fried catfish, fried chicken, fried okra, fries, beans, green beans, corn, potatoes and gravy and cornbread amongst the offerings -- and cobblers at the end for dessert. 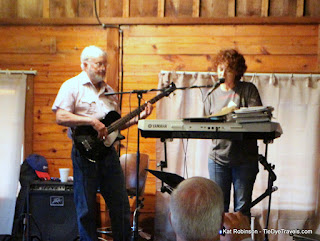 But I was hankering for some real beef... since, after all, the place is called Cattleman's and is attached to a sale barn.

So I was surprised to not see any steak save the hamburger steak on the menu.  But there were burgers and sandwiches, plate dinners (fish, chicken, ham, pork filet, hamburger steak, fried chicken, grilled chicken) and an array of salads.  So I asked my waitress, who turned out to be a member of the family, what she suggested.

"My favorite is the burger, but I also like the Reuben."

One of the other customers heard me asking and hollered "you need to come see what I just got!"  So I did, and found she had a Philly and it looked amazing. But I decided to go play it safe, since that was what my waitress had suggested.

"Anyone ever order the triple?" I asked.  Her eyes got wide.

"I've never seen anyone eat it," she told me.

"Yeah, that does sound like a lot of food.  How about a double?"

She took off for the kitchen. While I waited, a little girl got up and sat on a chair on the stage and started to sing Amazing Grace.

As she started to sing, the band started in, and Loree joined on the next verse.  Now, this wasn't big-city entertainment.  But it was touching and sweet and I was glad to be there.

After performing another, Loree and the two Kennys took a break. Loree made a point to come around and check on everyone, and got to talking with one of the other patrons about an older woman who'd recently had to have surgery to remove two toes. "She told me she'll save money on pedicures!" Loree told the customer, and both started laughing.

When she reached my table, she asked me if I'd been waiting long.  She said she'd go check on my burger. And a few moments later, she delivered it to me... and saw that I was sending an Instagram.  She thanked me for it and moved on. 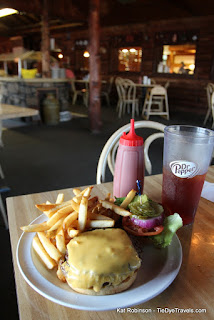 Now, this burger... it was phenomenal. What I got was two substantial 1/3 pound patties covered in slabs of melted American cheese on one bun, and a pile of vegetables including green leaf lettuce, tomato, red onion and dill pickles on the other, held in place by a toothpick.

Once I got it assembled, I was barely able to get my jaw around it.  But what I tasted was marvelous -- a great flavor to the meat, a great crust on the burger, well seasoned and just all around grand.  It was served on a Kaiser roll, which was perfect for the flavor but which started to come apart after a few bites.  No matter.  I 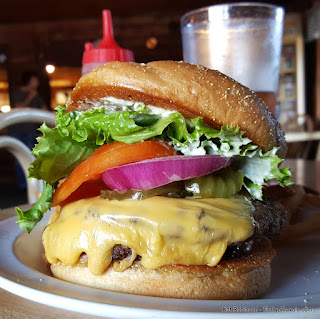 turned it over and ate it the other way.

Did I finish?  Oh, no.  But I did get a really good burger worth two meals out of the deal.

While I dined, Loree and the two Kennys tackled some great hits - and they went outside the country music genre.  Yes, they did play "He Stopped Loving Her Today," which always brings a tear to my eye.  And Loree shined bright with The Carpenter's "Top of the World."  And then, I'm guessing by request, one of the Kennys launched into "House of the Rising Sun" in a deep bass.

My dinner-and-a-show bill was around $11 before the tip, and the girl at the register seemed a little surprised when I asked to tack that tip on.  For $11 I had received a magnificent burger, iced tea, fries and an hour of entertainment.  Not a bad way to spend a Saturday night.

Loree's Cattleman's Restaurant is open from six in the morning til two in the afternoon every day for breakfast and lunch.  Evening hours on Saturdays are 5-9 p.m., and I'm told the band usually gets going about 6:30. 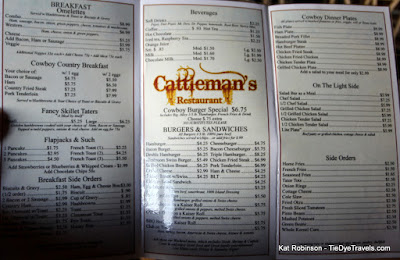 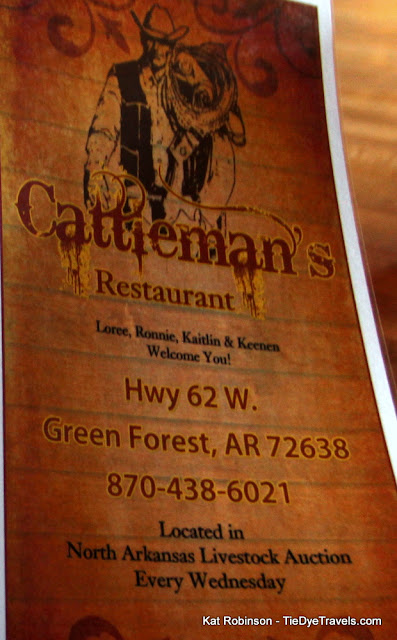