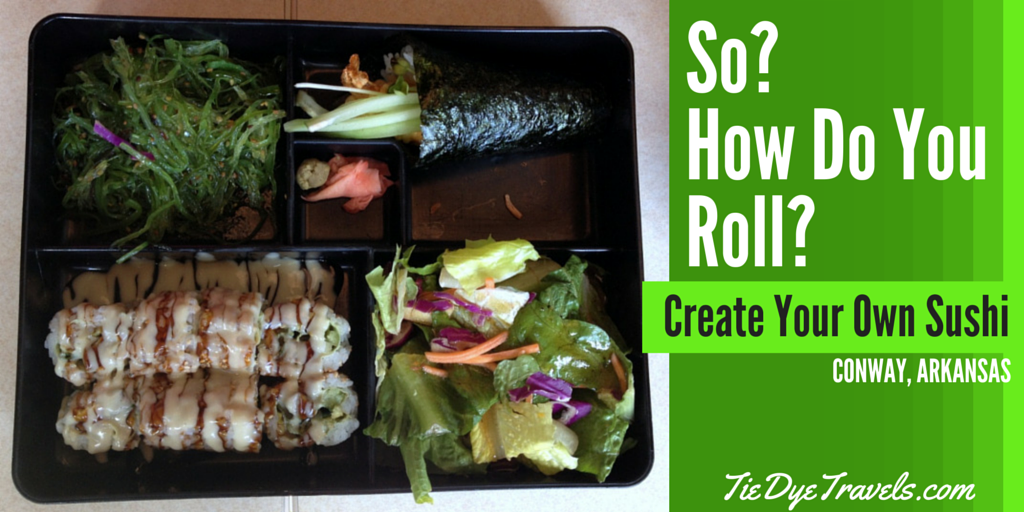 If you've been reading Tie Dye Travels any length of time, you've probably picked up on the fact that my daughter is a sushi fanatic.  We're not talking California rolls and tempura shrimp... we're talking octopus salad, seaweed and eel.  Hunter Robinson is a sushi freak and has been since her first bite of solid food (which was, not intentionally, wasabi paste).

She sings the praises of her favorite sushi spots, Tokyo House in Little Rock and Umami in Conway, constantly.  The former offers her the luxury of pieces of a dozen different rolls in a sitting.  The latter has a Black Dragon roll they don't even need to ask if she wants when she goes.  She has become such a familiar at both places that they welcome her by name.

Sure, we have other sushi haunts, such as Igibon and Mt. Fuji and Sushi Cafe... but we have been pretty regular about hitting just those joints as of late.  So, on a recommendation, we decided to try Conway's hip, chic How Do You Roll? on a Saturday lunchtime. 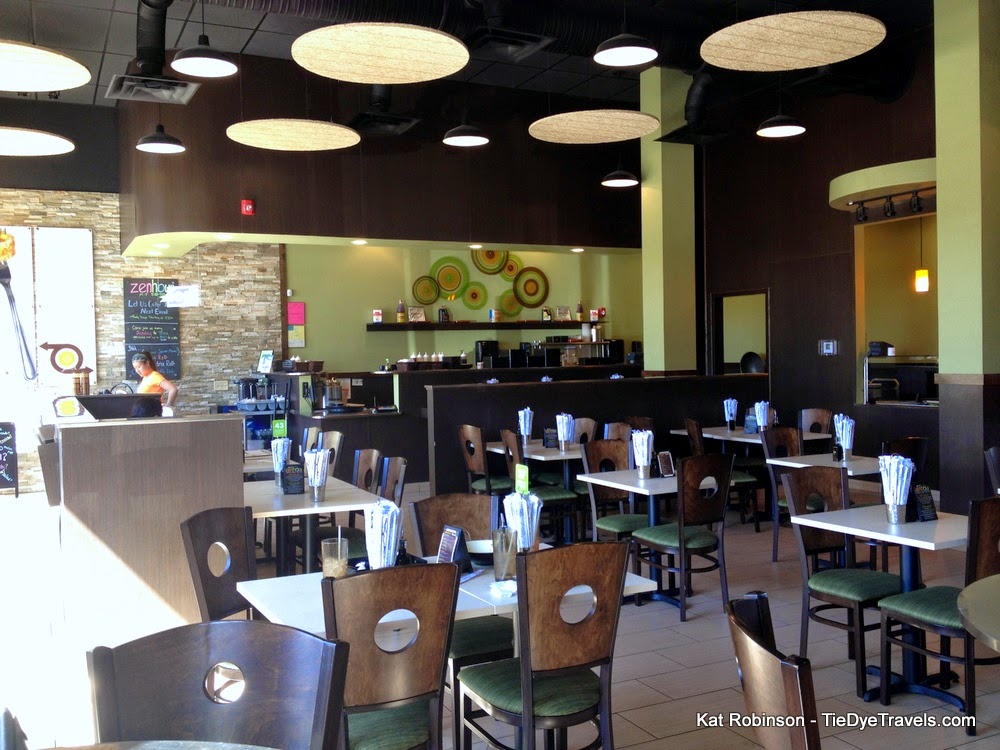 Like many of the Hendrix-area eateries that have popped up in recent years, How Do You Roll? is incredibly hip and trendy, with all the straight clean lines you'd expect from a 2010s era hotspot.  Its menu is formidable, but not in the average sushi list sort of way.  Instead, you pick up your menu and make your decision before you ever make it to the register.

That, in itself, could be troublesome to newcomers, since the place's big draw is choose-your-own sushi.  As in, pick your protein and three vegetables (which includes cream cheese, tofu and seasonal fruit) and a topping to go on the top.  Or inside, if you're getting a hand roll, er, CONE as they put it.  There are, in fact, so many items on the menu that for a first-time visitor, I found myself staring dumbfounded at the menu while Hunter debated her own choices.  No Black Dragon roll here, she soon discovered.

This lead to the possibility of, well, anything.  Which, if you know exactly what you want, is a great thing.  Or, if you're like me on a Saturday where V8 has been the only thing consumed since five in the morning, you stare dumbly and hope the hipsters and college students who slide by to the register don't think you're too much of a square.  Is the term "square" still used that way?  I haven't a clue. 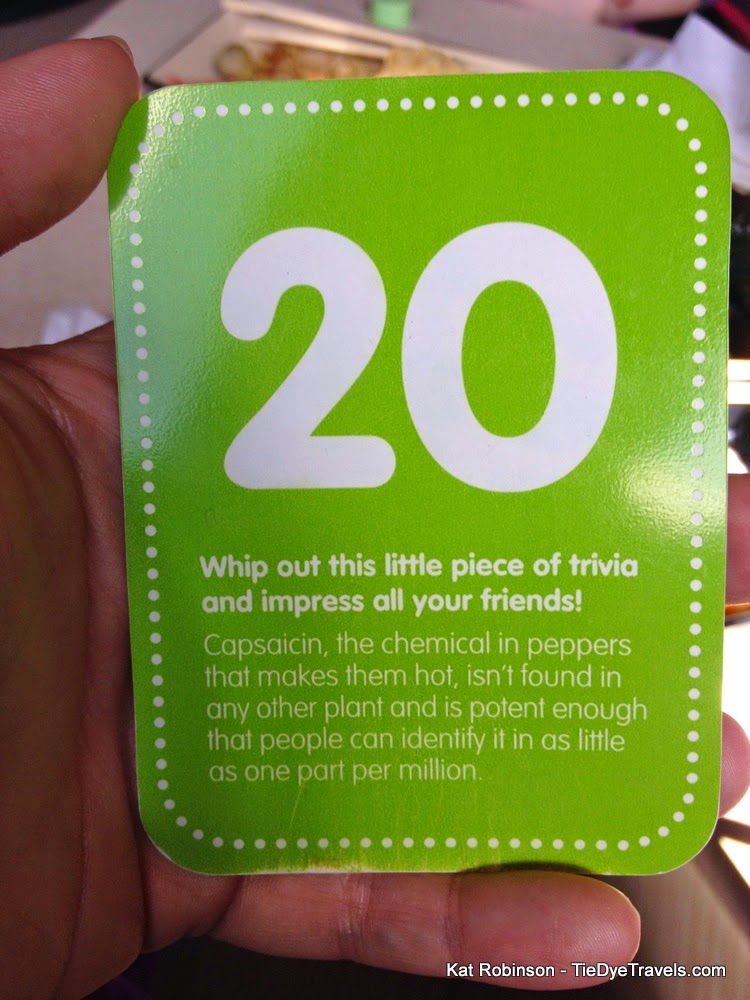 Any time I have cash in pocket and a big menu, I tend to over-order, and this indeed was the case.  Hunter had finally picked out her create-your-own roll, and stumped the lovely young lady at the cash register by asking for Ramune, which she could see in the cooler behind the register (the young lady said they just referred to it as Japanese soda) and ordered an eel-avocado-carrot-cucumber roll with tempura bits.  I went for a Bento, which at first seemed a bit high at $13.  Seemed.  We were given a card with a number on it to put on a stand wherever we sat.  It had trivia on it. 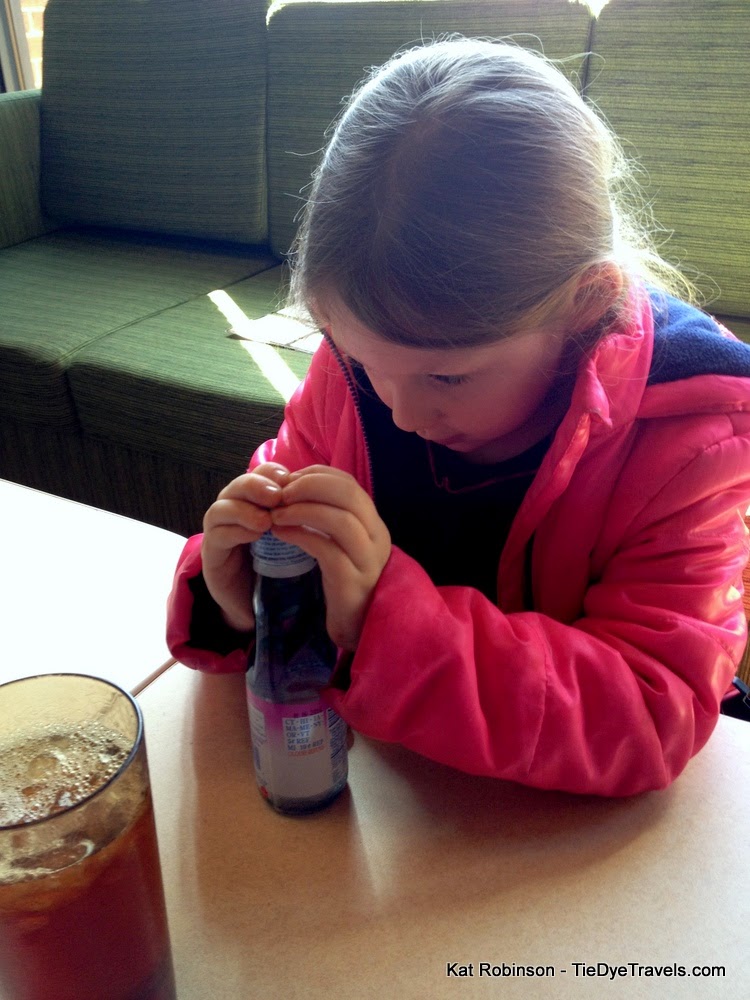 Hunter got her beverage and I went and filled my glass with tea.  She decided we needed to sit at the lower tables by the couch... I suppose that makes much more sense to her, having shorter legs than mine.  I watched as she attempted to pop the marble into her Ramune before smashing it down in myself.  The lychee flavored beverage is all right, but I'm perfectly happy with iced tea, thank you very much.

As we waited, we chatted.  Hunter got excited when she heard the music overhead switch to the new Fall Out Boy's tune called Centuries, which 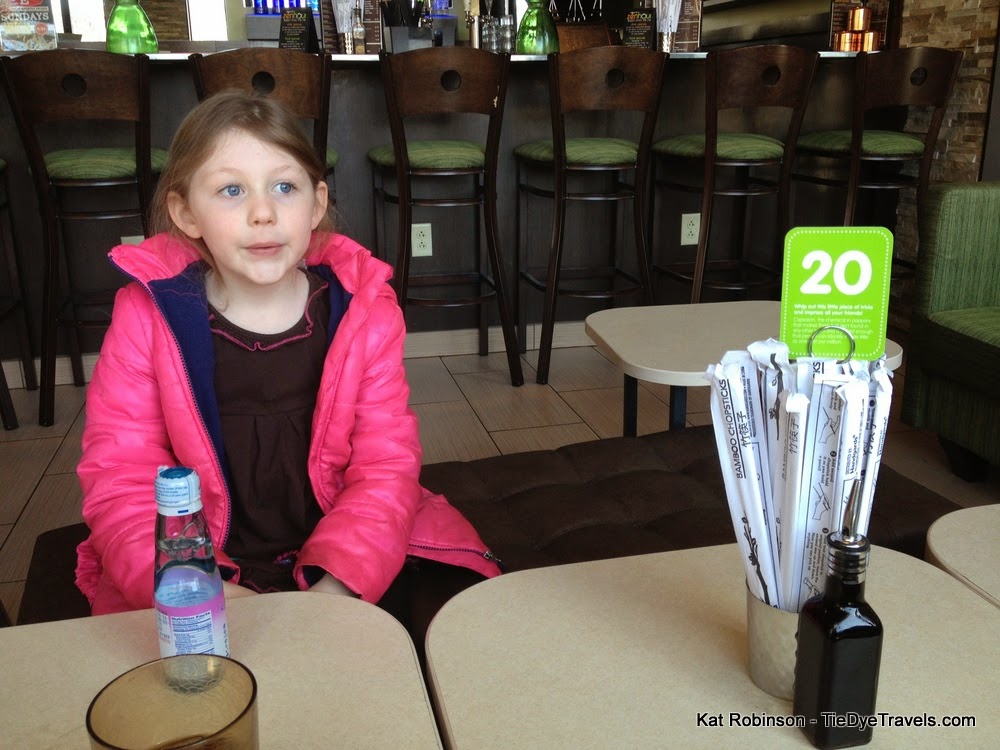 samples Suzanne Vega's Tom's Diner.  I regaled Hunter with the information that Tom's Diner was a hit when I was in high school.  She seemed interested in that fact, but I wondered if she once again realized just how old I am.  Probably not.  She's six.  She has about a decade to get cynical on me. 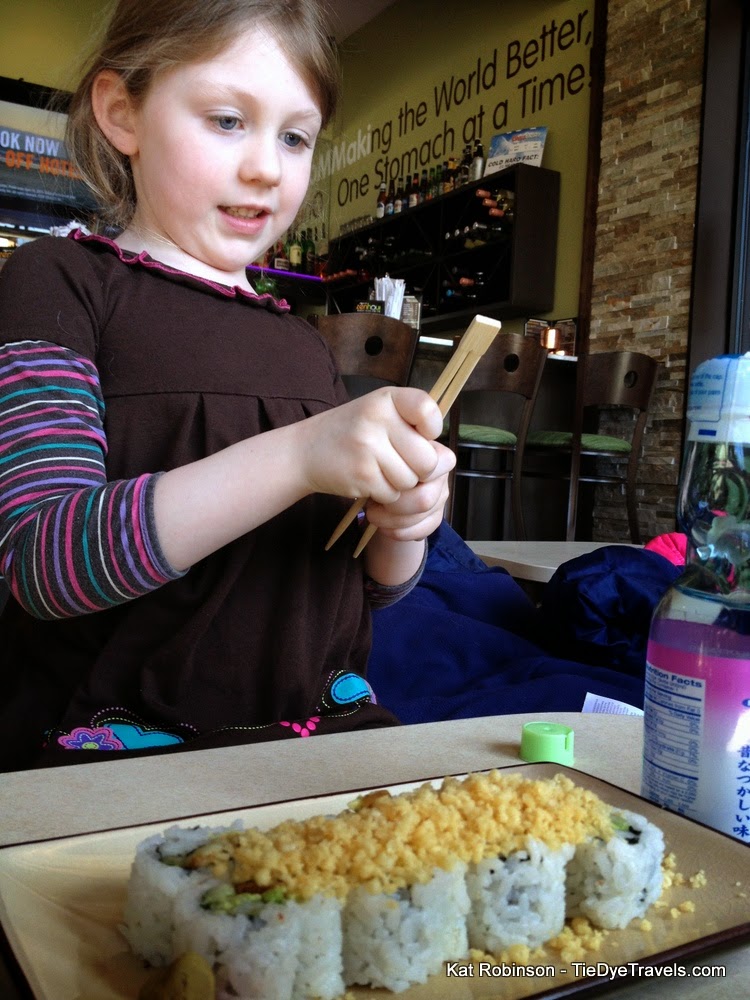 Our food was soon delivered.  Hunter's plate was simple -- a rice-sided roll sliced into eight bite-sized pieces, covered in a mountain of tempura bits.  She eyed the mess as she struggled to pop her chopsticks apart,  I don't think that's what she had expected, but as I reminded her, she hadn't asked about eel sauce.  I did make sure that what she had on top wasn't French's fried onions (yes, that's happened before) and helped her sweep some of the tempura off the top.  Once she dove in, though, she happily consumed most of it.  As I said, she's six. 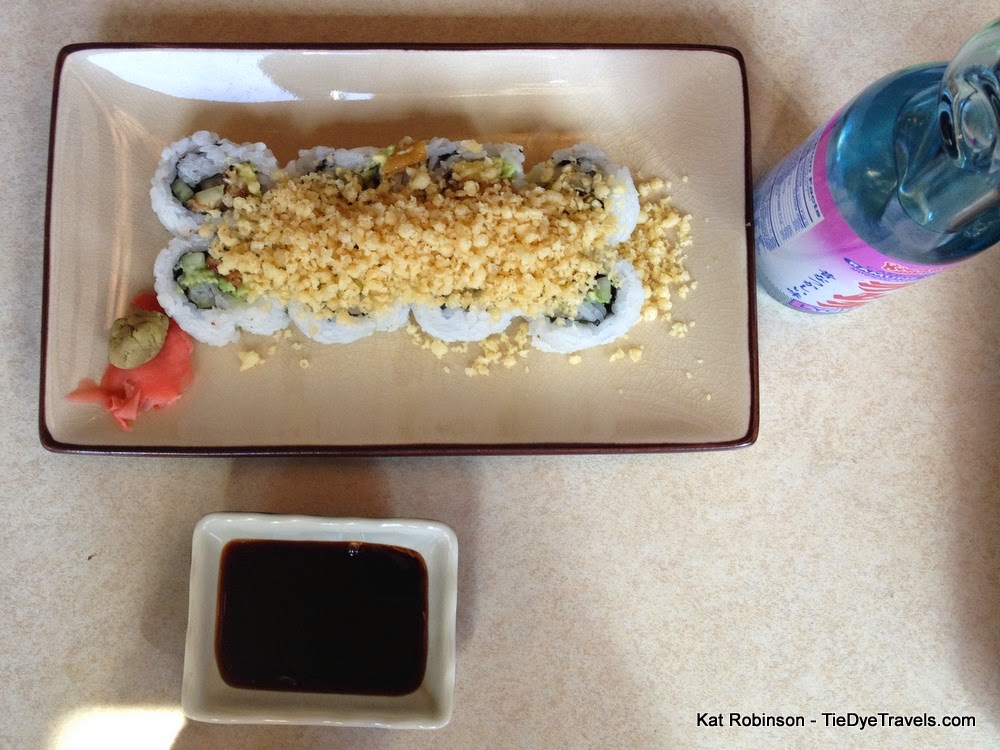 This was a pretty long roll.  The custom rolls, by the way, are
$8.

The Bento I'd ordered was.... well, the portions were larger than I thought.  How Do You Roll?  offers their bentos as a roll, a hand roll -- er, I'm sorry, cone (they call it), and two appetizers. 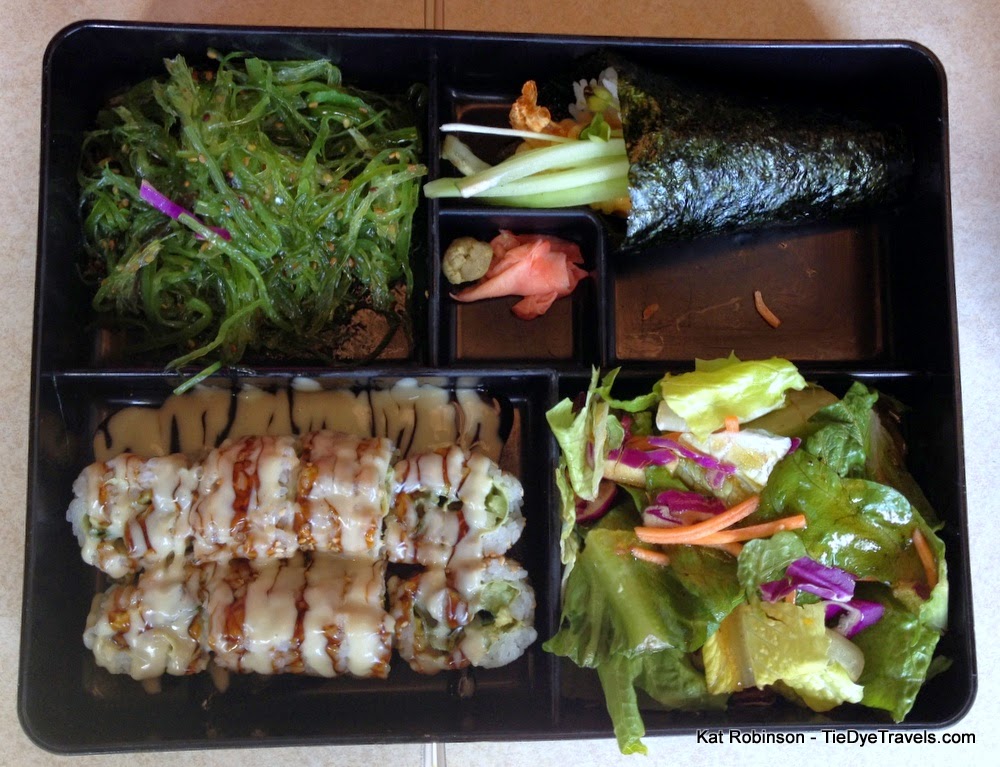 I wanted a good ginger side salad and a little seaweed salad.  I got a LOT of seaweed salad and some lovely dark green lettuce topped with a sweet but clear ginger dressing completely unlike what I was expecting.  I am not complaining in the slightest.  This ginger dressing, though rather 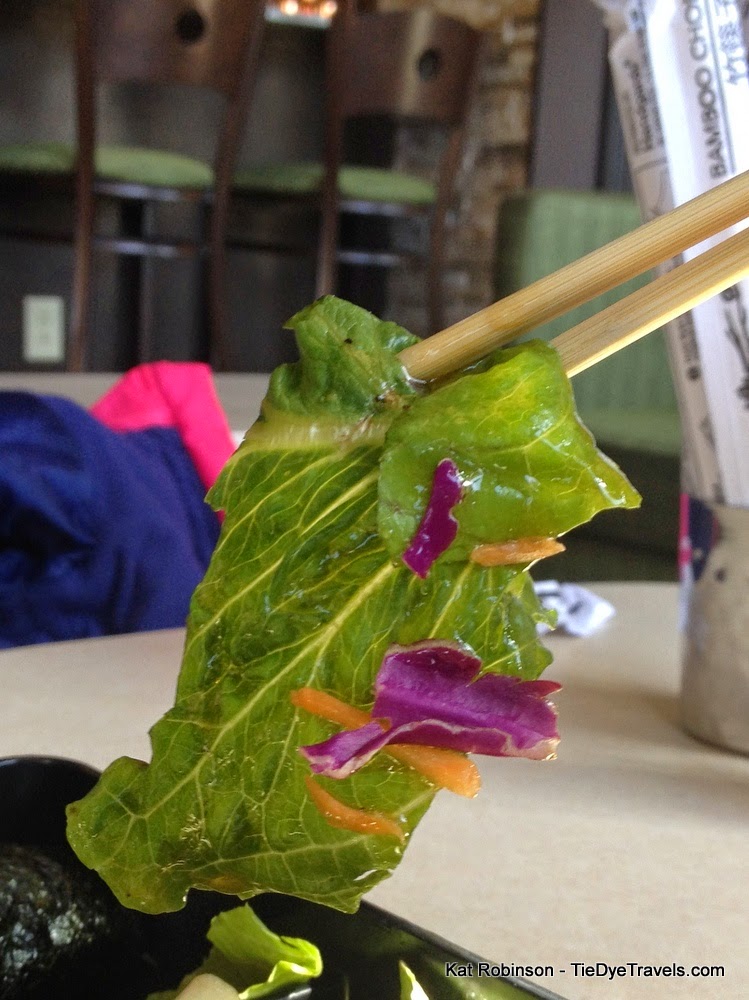 sweet, wasn't a puddle of pink watery emulsion like is often experienced when a Japanese restaurant lacks care in preparation.  It was thicker than it looked and it clung to the leaves, and I liked it.

Hunter, of course, was all about my seaweed salad and helped herself to plenty of it.  And still, between the two of us, there was just too much.

Now, I was trying whatever came along, so I chose the Beefinator for my roll.  I guess I was expecting something more similar to The Cowboy at Sushi Cafe or the Beef Roll 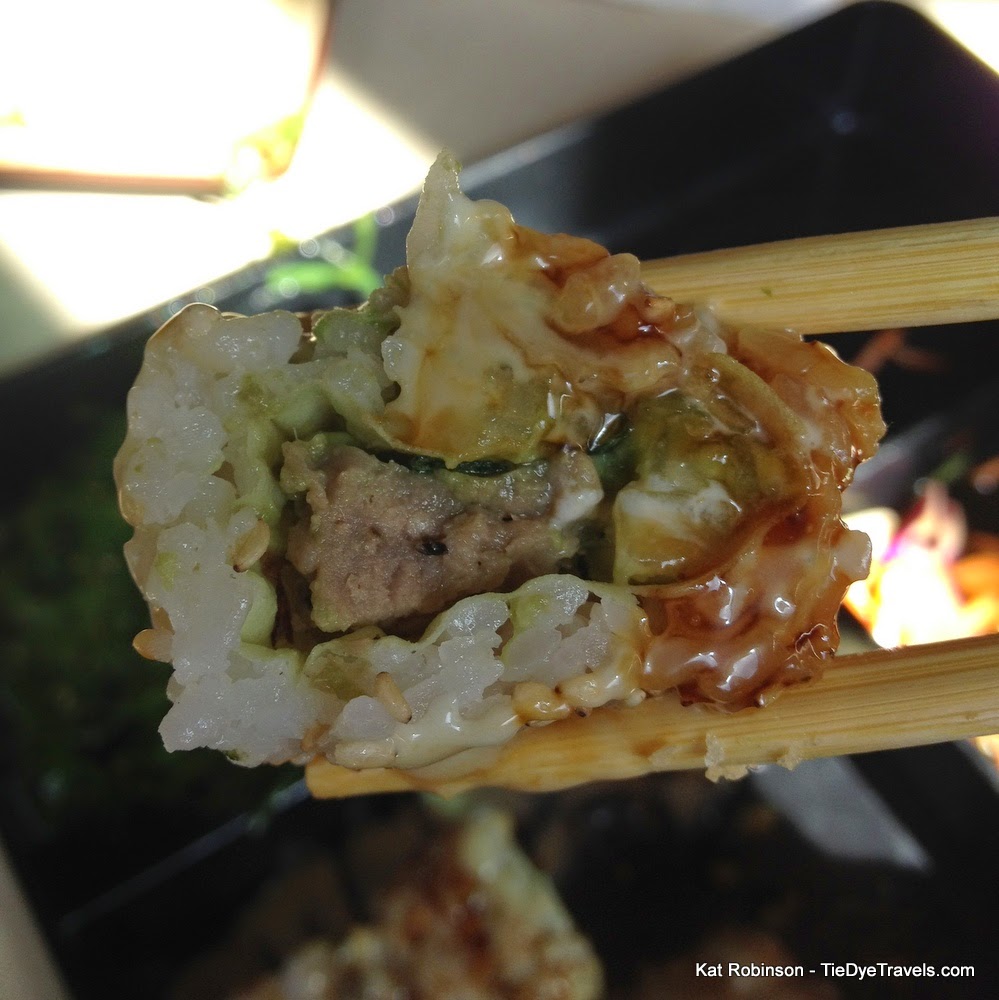 at Igibon.  This was neither.  While it did have a nice teriyaki sauce to it, it had a rather overcooked piece of beef within, which gave me the rather odd sensation of having a very solid, very chewy version of southern-style beef and rice with some sweet stuff on top.  I really didn't get much of the avocado and cucumber, but I sure got a LOT of Japanese mayo and sesame seeds.  I think I'll order something different next time. 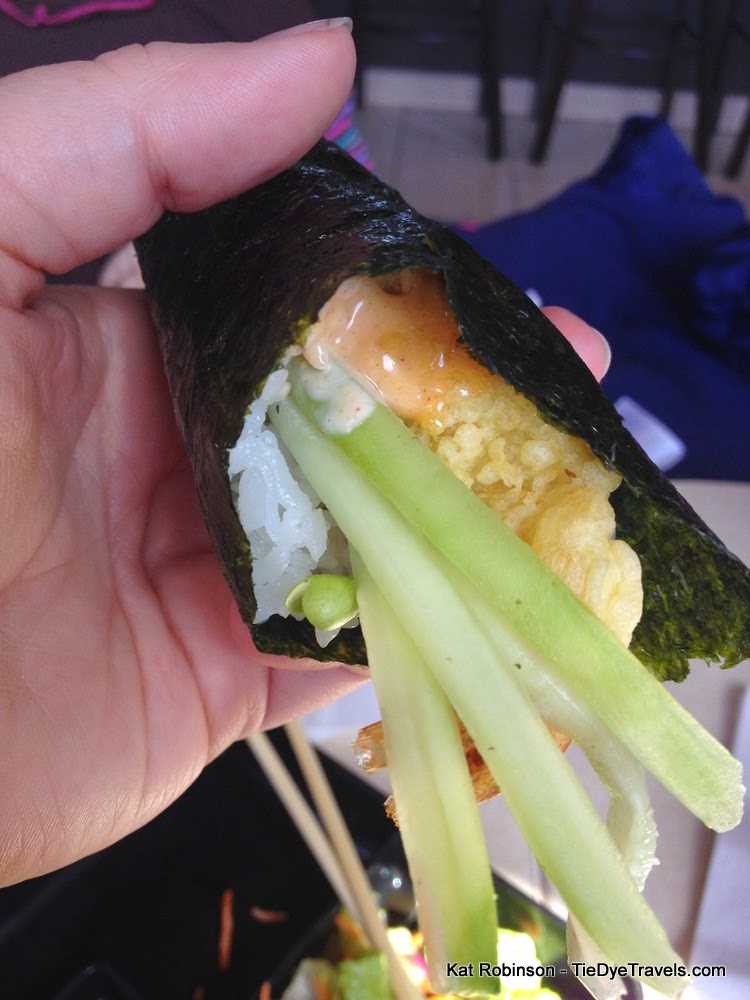 I got the Rockin' Shrimp for my... sushi cone... okay, yes, that's REALLY bothering me because I am a handroll enthusiast... egads... but this was pretty good. Couldn't really tell a difference between "yum yum" sauce and Japanese mayo, but the tempura shrimp was ample and the cucumber was crunchy.  I was completely not interested in one of the other... cone... options that consisted of chicken and waffles, but I may have also been pretty off that day, too.  After all, I'd just come off the epic 2100 mile nine day roadtrip (which you'll be hearing more about next week) and I was pretty beat. 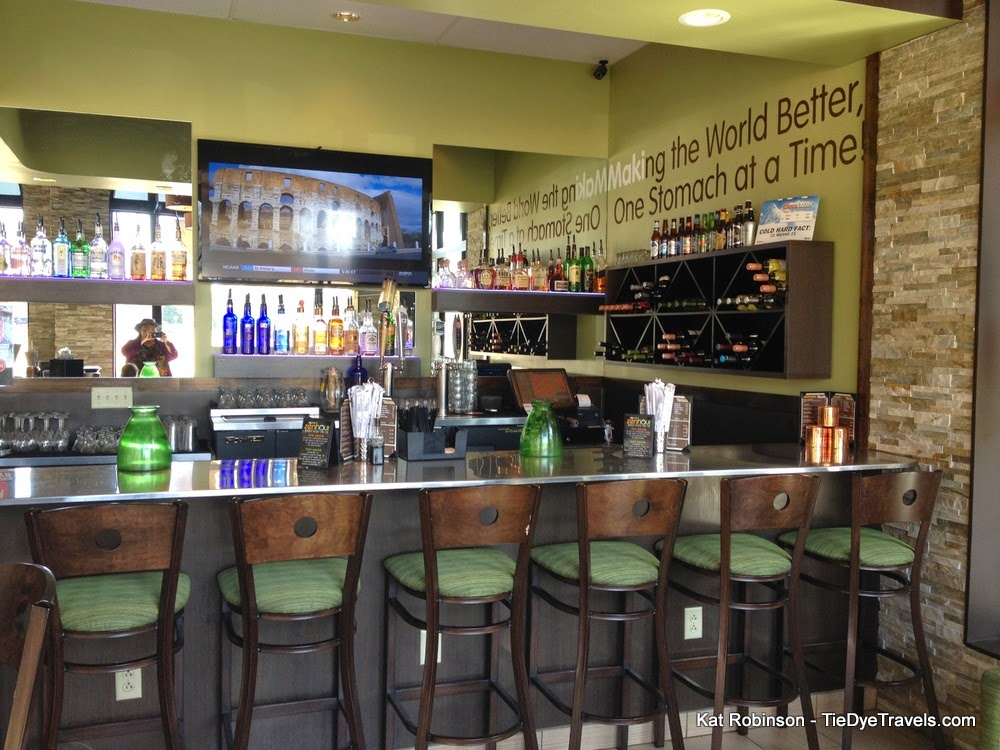 We ended up taking half my roll, a piece of Hunter's roll and the seaweed salad home for later, which made a great late afternoon snack for her while I was getting laundry done.  I think we're going to go back soon, to try some of the other rolls on a day when I'm not fall-down tired.

So, when we left, I pulled out my phone and played Tom's Diner on it.  I haven't listened to it in about a decade or more.  Strangely, it struck me as maybe more my writing style.  I mean, after all, she doesn't really talk about the food.

That has very little to do with anything, but there you go. Go see what you think about How Do You Roll? and share your thoughts. 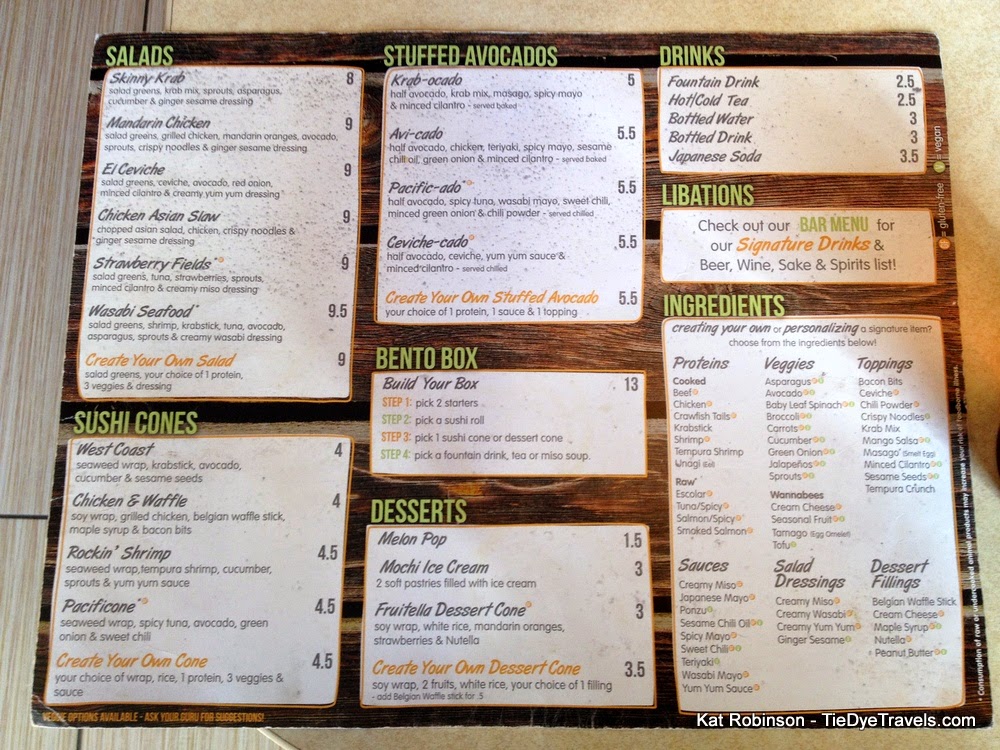 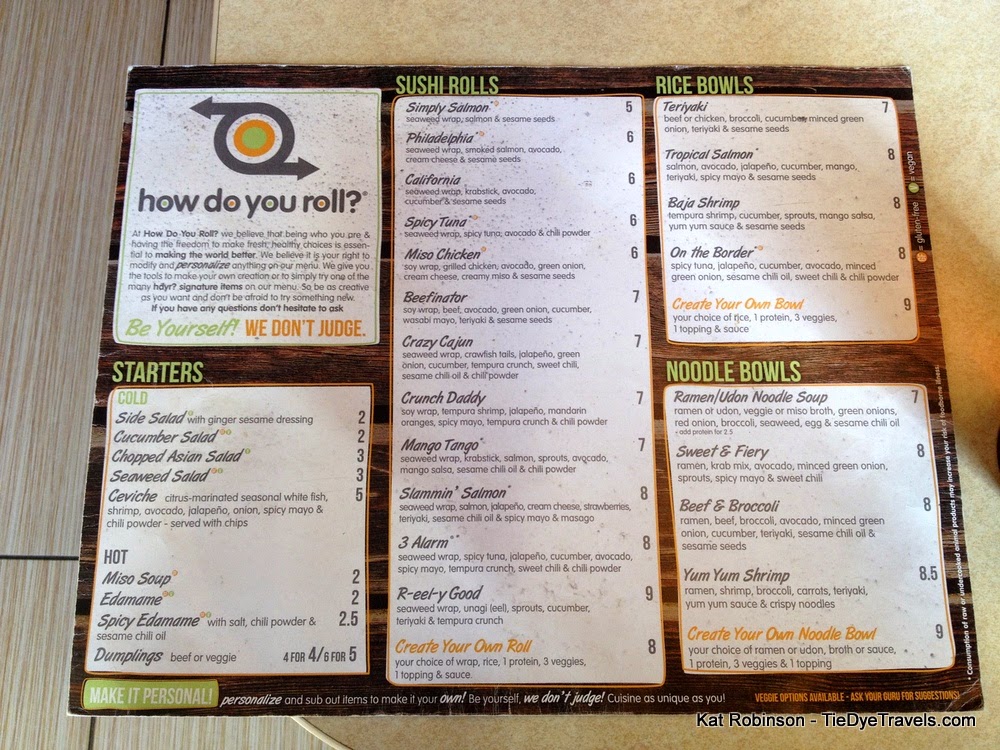 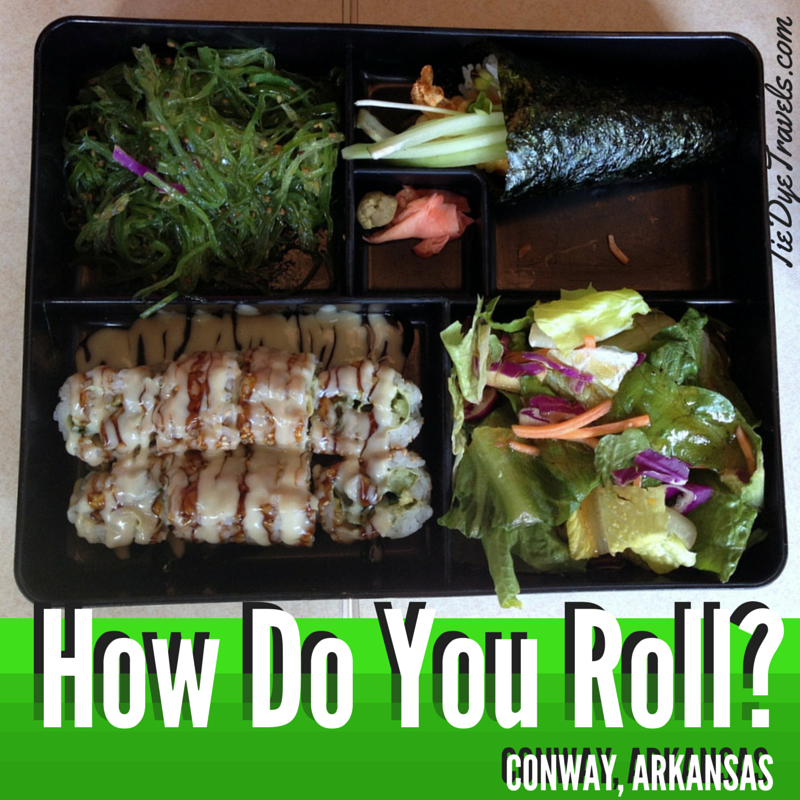 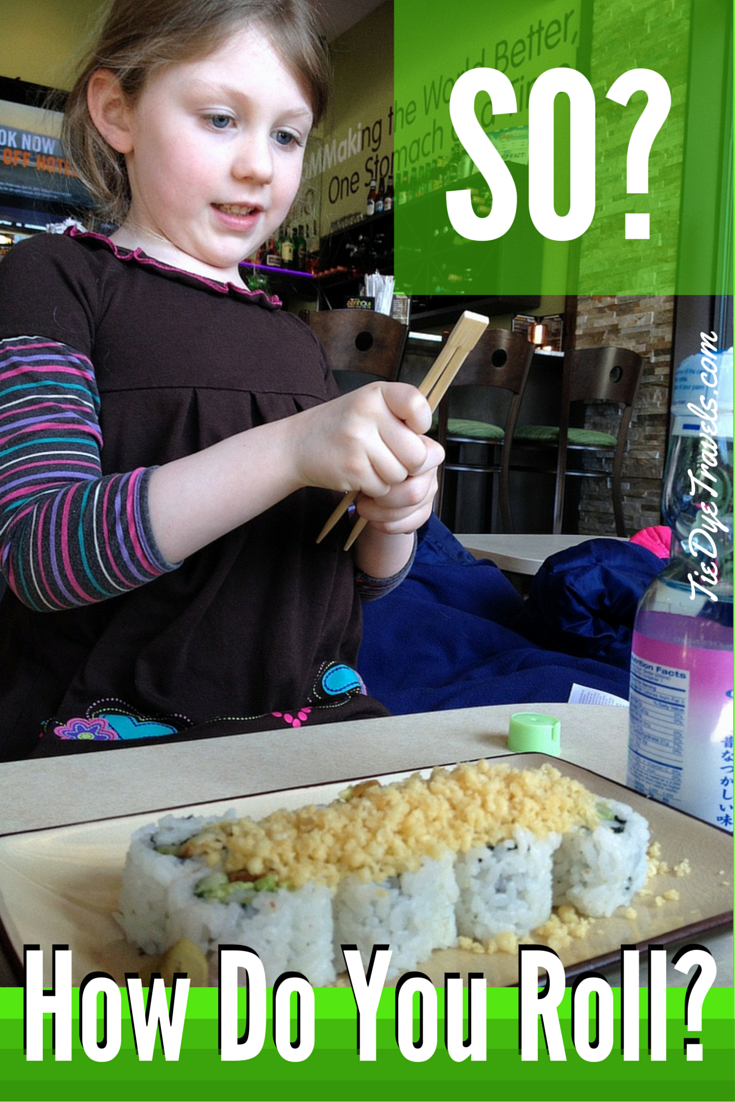