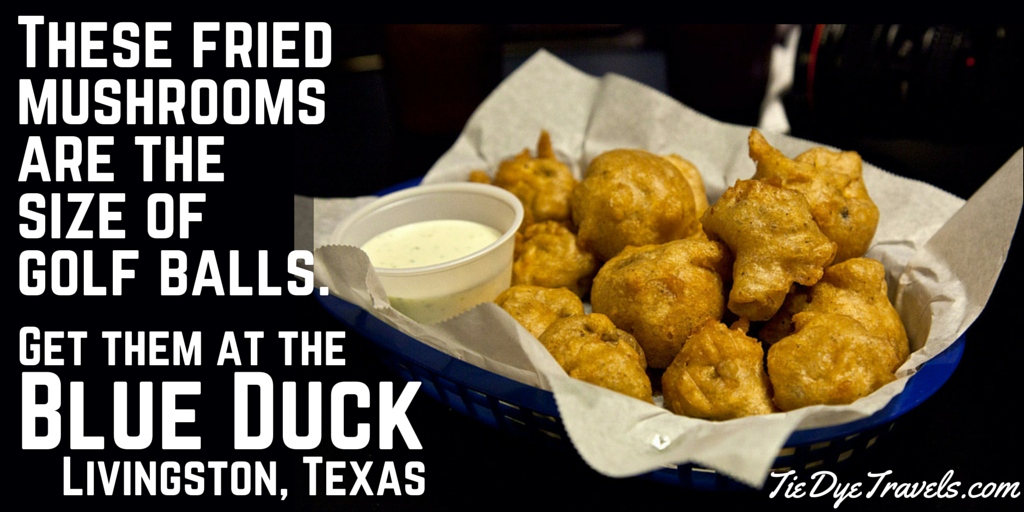 Something you learn doing what we do... is to never judge a book by its cover.  Or, in this instance, a restaurant by its menu.

Coming to the end of our long journey, we had just perched for the night in Livingston, TX, about an hour out from Houston.  This was our last night on the road together for the coming month, and we were going to make it count...by finding a really great restaurant.

Thing is, though, Livingston in the dark is not a very promising-looking place, and Urbanspoon wasn't coming up with a lot of places to try out.  There was this one listing downtown, though, for a place called the Blue Duck.  There were no photos of the food, just an exterior and what appeared to be a window with the restaurant's logo.  Though we were tired, we were up for the challenge, we thought.

After parking on the street (the Blue Duck is on a block close to the county courthouse), we ducked the rain and found our entry point, a four story building that had apparently received recent care.  Inside, we walked through a small dining room where a single group had gathered, and were ushered further in by a hostess. 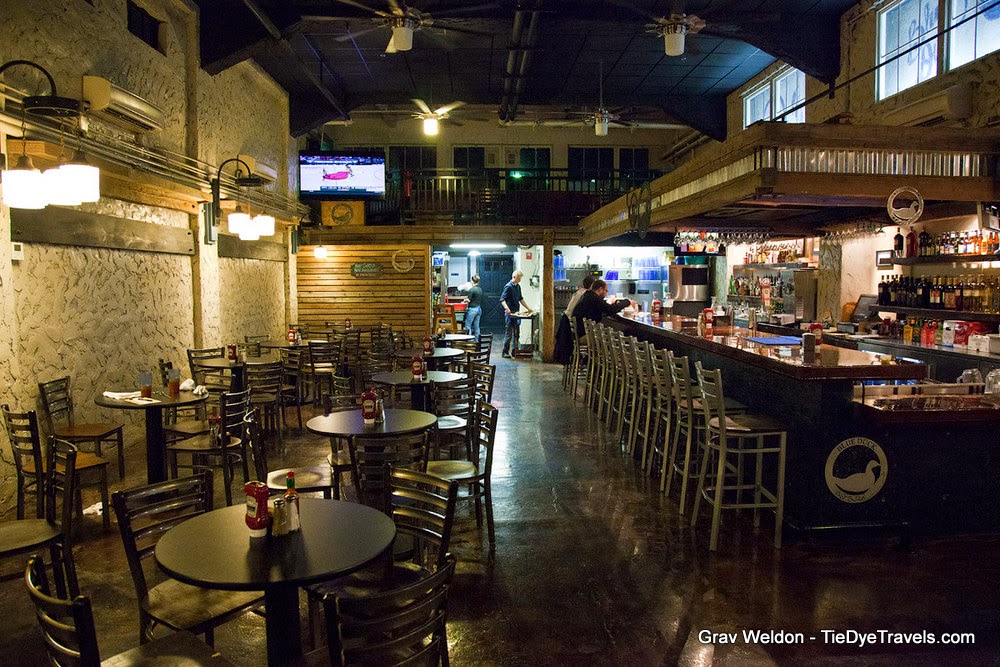 This second room was a two story cave with windows in the far back, with a staircase to one side and a bar that ran about two thirds the length of the room.  Immediately our hearts sank... it appeared we'd come to a bar, and neither of us were in the mood for bar fare. 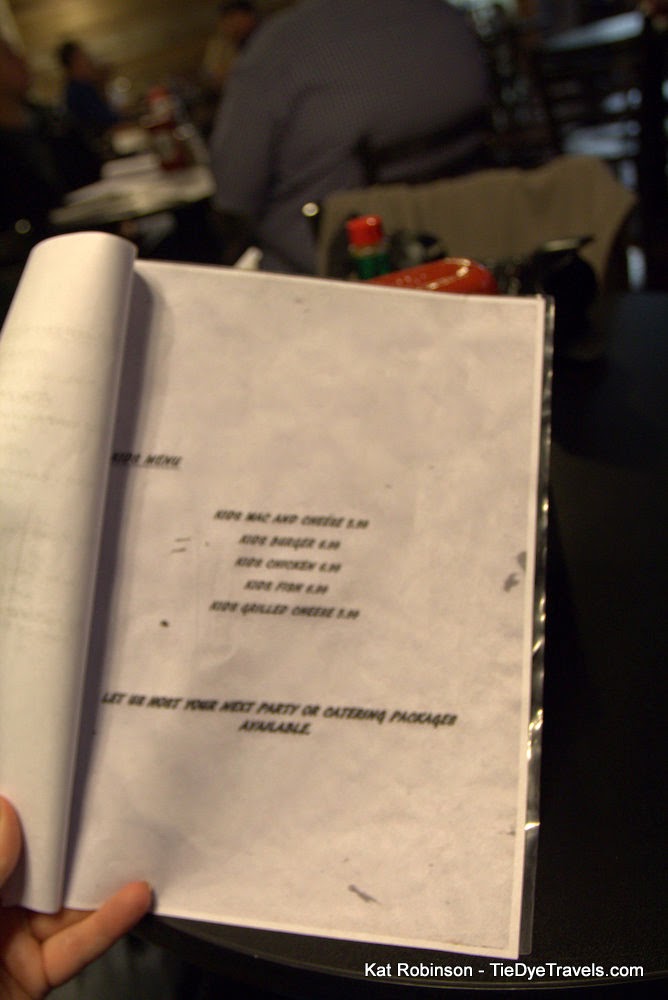 We didn't feel much better when we saw the menus, which were often-dampened printed sheets slid inside a report cover.  In fact, this really, really screamed "bar food" to us.

But at the next table, a family was being asked what they wanted for dessert, and one of the options happened to be a strawberry cheesecake brownie.  I looked at Grav and shrugged and he shrugged back.  It was close to eight in the evening.  We were tired.  We weren't going anywhere else.

We finally got up the gumption to order.  I was curious about the steak-filled potato, which our waitress insisted was a winner.  Grav ordered a pork chop, and we put in for an order of fried mushrooms. 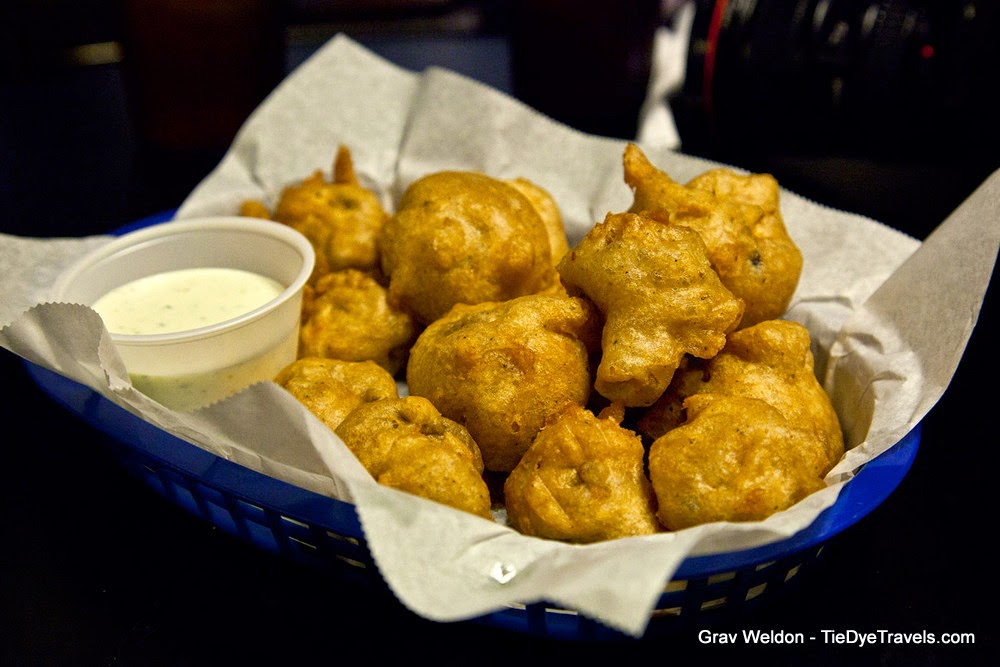 Now, honestly, I assumed the mushrooms would have been the plain Farm Rich or food service breadcrumb-encrusted mushrooms that you get most anywhere. Instead, a while later our waitress delivered a basket of fat, golf ball-sized golden globes to our table with ranch dressing.   We were 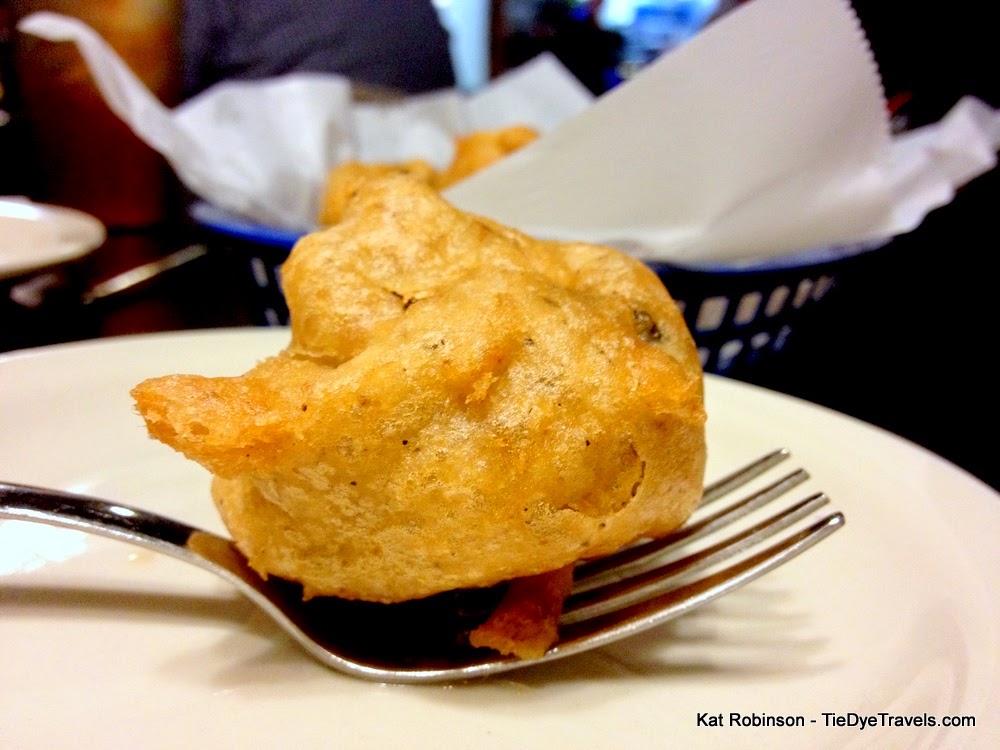 stunned.  She informed us these creations were battered with Shiner Bock, and made right in the kitchen.

Everything changed at that moment.  Thrilled with the prospect of an actual decent meal, we found ourselves salivating as we shot and then downed these magnificent creations.  Both of us took to cutting them in half to prevent the inter-oral explosion of hot mushroom juices between our teeth.  They were huge, and they were delicious. 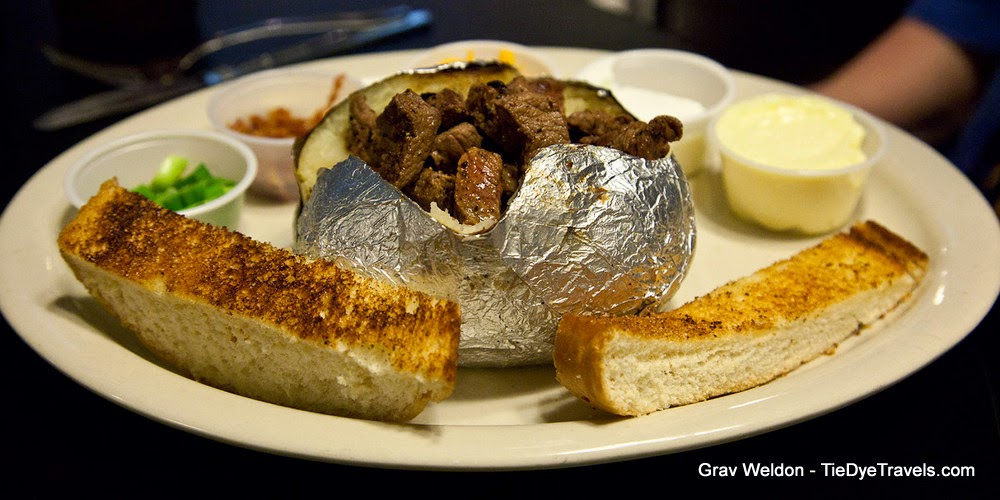 Our meals weren't far behind.  I found that the steak potato I ordered came with a display of different toppings -- cheese, sour cream, margarine, chives and real bacon -- and that the medium-sized potato had 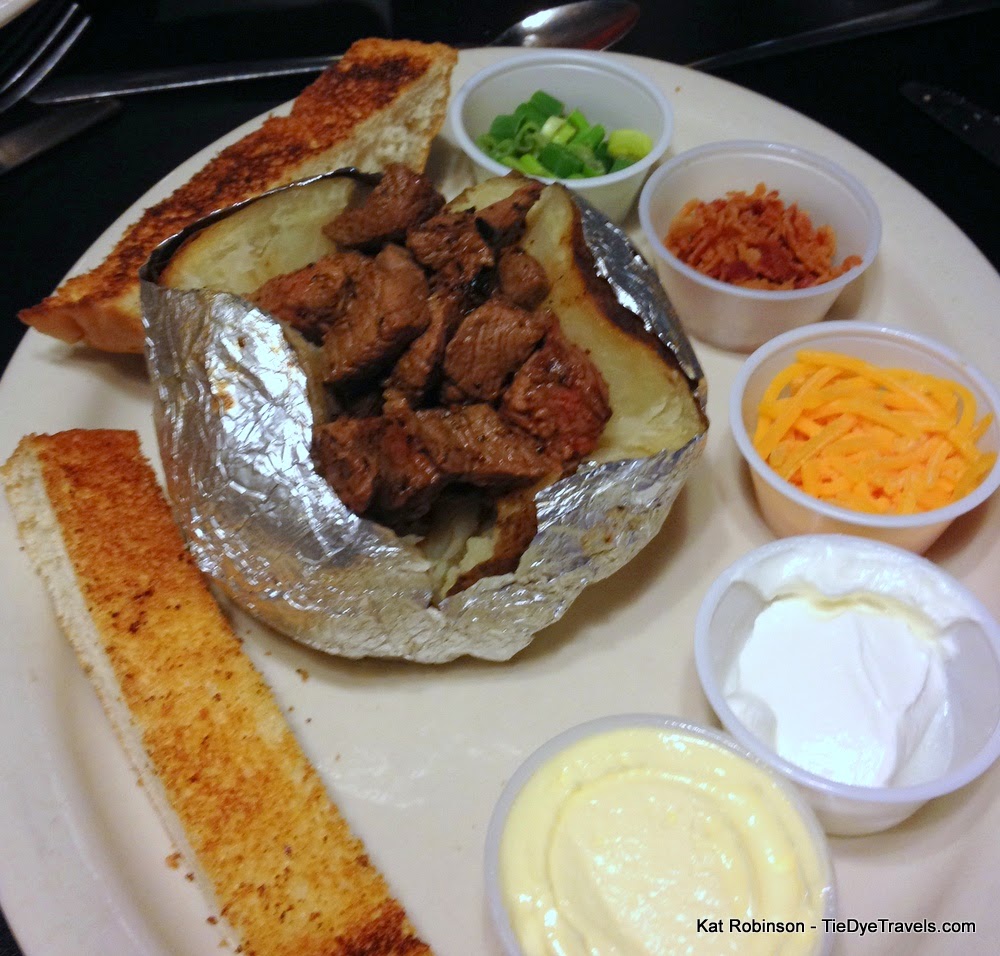 been filled with about eight ounces of just-cooked steak.  The pieces were a perfect medium rare, leaving a pinkish stain on the inside of the potato.  They'd been cooked in a combination of steak seasoning and Worchestershire sauce and needed no extra additives to be delicious.  The affair came with a couple of slices of very crusty French bread. 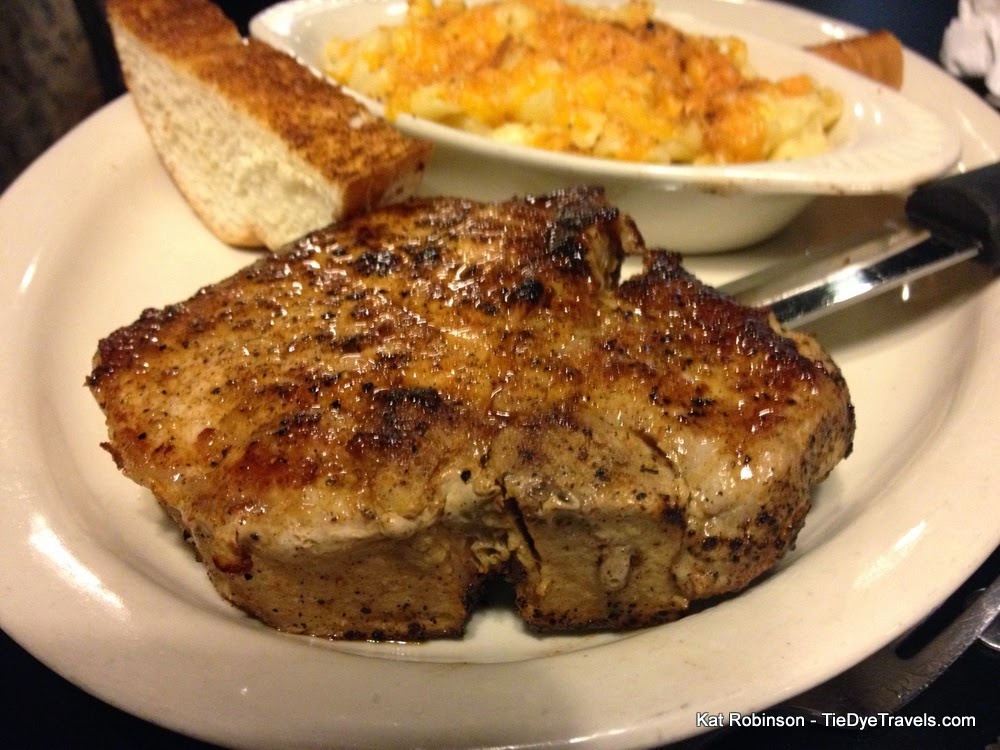 While my dish was exactly what I wanted, Grav's was exactly what he needed -- which, in his case, was a reason to believe in pork chops again.  We've been many places, and he's encountered everything from half inch to quarter inch thick chops, usually grayish slabs served alongside eggs or a potato or a side item, uninspiring 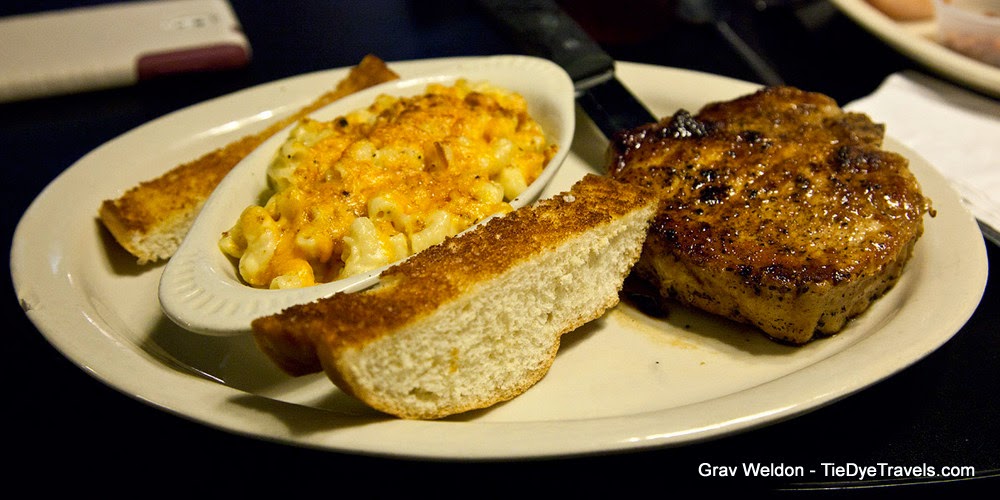 and unappealing.  Not this time.  The inch-thick or better chop was lightly crusted from its turn under the broiler, crispy-coated yet so tender.  The porkish aroma was influenced with a little salt and not much more, but 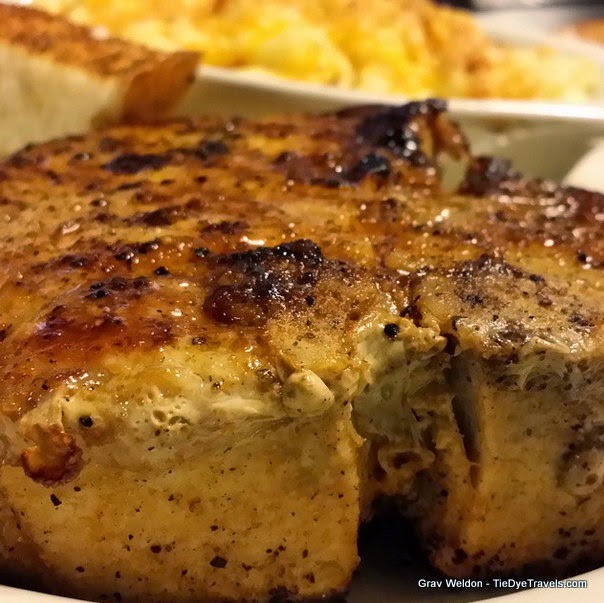 it was so achingly good that I wanted to touch it, to ply it between my teeth and engage in its destruction.  Oh, terrible pork allergy, how I rue your existence!

What made my cravings worse was the long ramekin packed with macaroni noodles in bechamel sauce, topped with Cheddar cheese, I was allowed a taste of this and almost ordered my own... but with so much food, it would have been a waste. 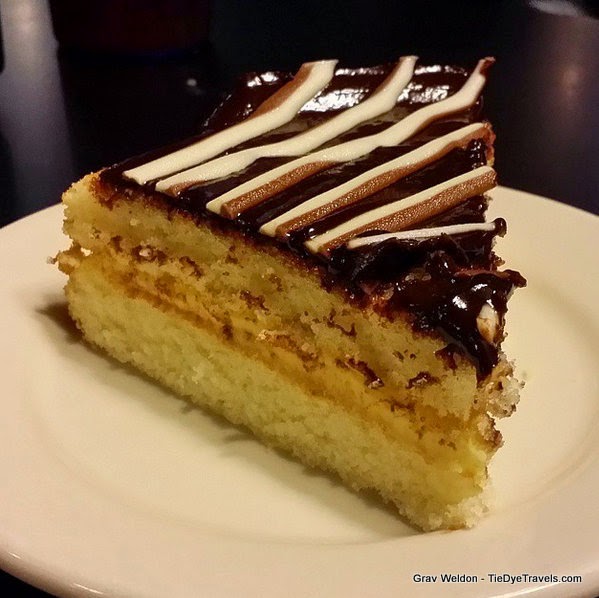 Amazingly, there were no leftovers, which considering our earlier contact with the gigantic double meat cheeseburgers at Fulton's Red River Cafe, was nothing short of amazing.  We even craved, and got, a piece of Boston Cream pie to share betwixt us.  It was moist and sweet and custardy and Grav let me have the last bites because he is awesome like that.

We walked out feeling very fortunate, excited still about the meal we had just encountered.  This pretty little restaurant served up some great food, despite a rather gnarly menu.  So, yeah, don't judge the restaurant by its menu cover. 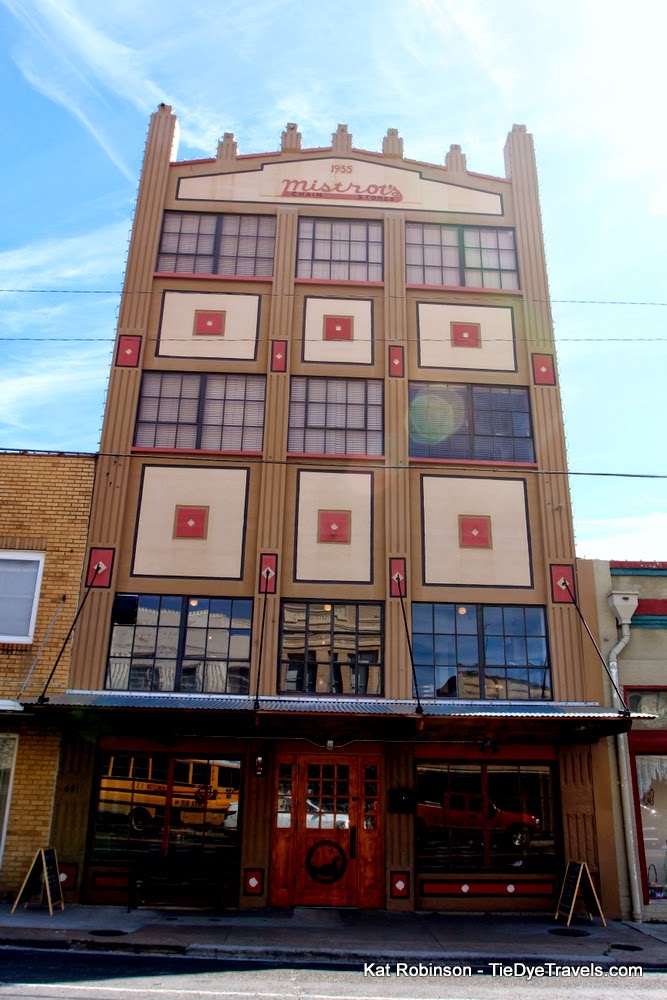 I went back and took a photo of the exterior during the day on my way home.  The building is pretty epic itself.  It's the former Mistrots Brothers facility and it dates back to 1935.  Lovely restoration, if the restaurant is any indication. I hope I find myself back down that way soon. 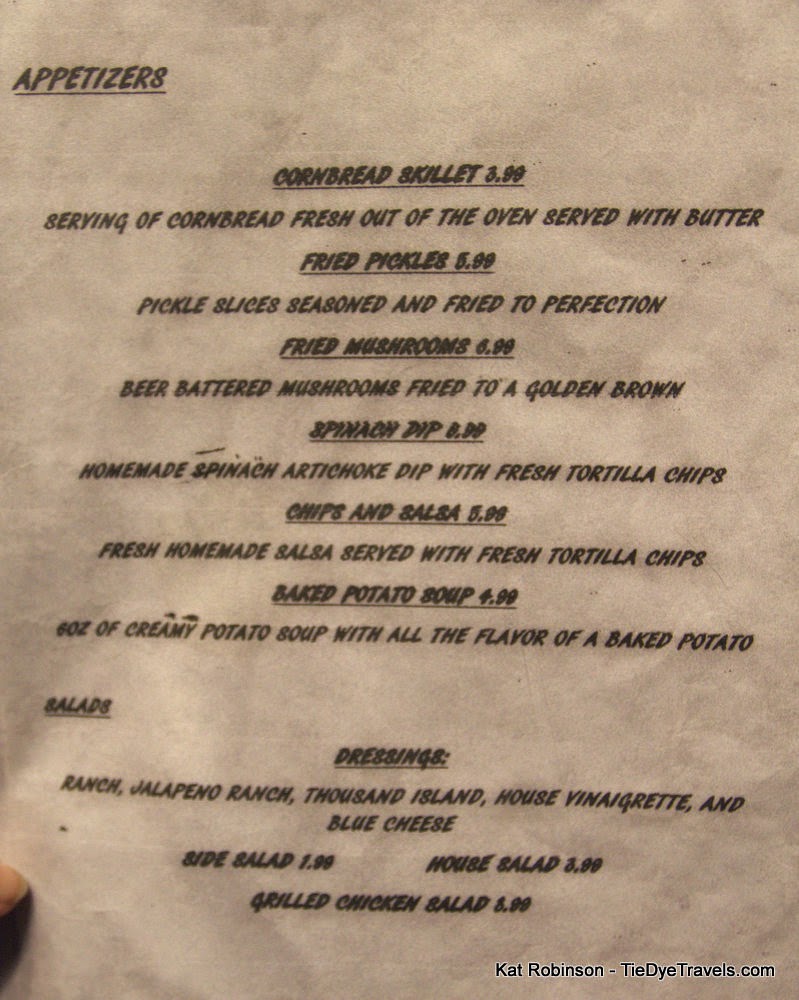 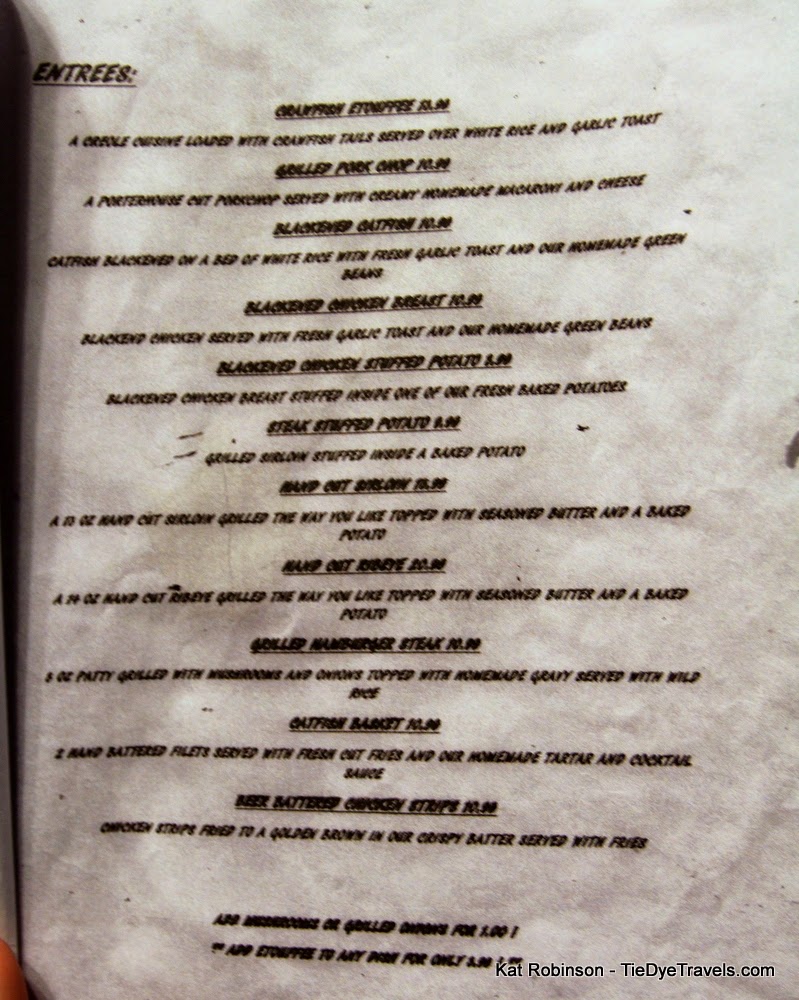 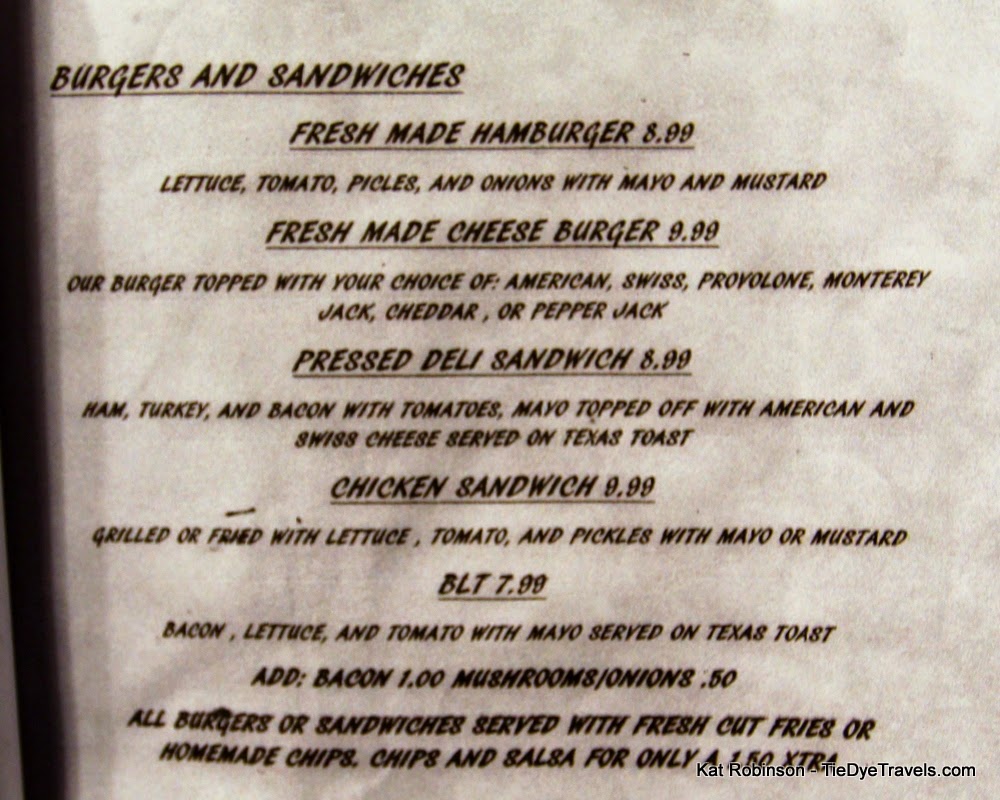 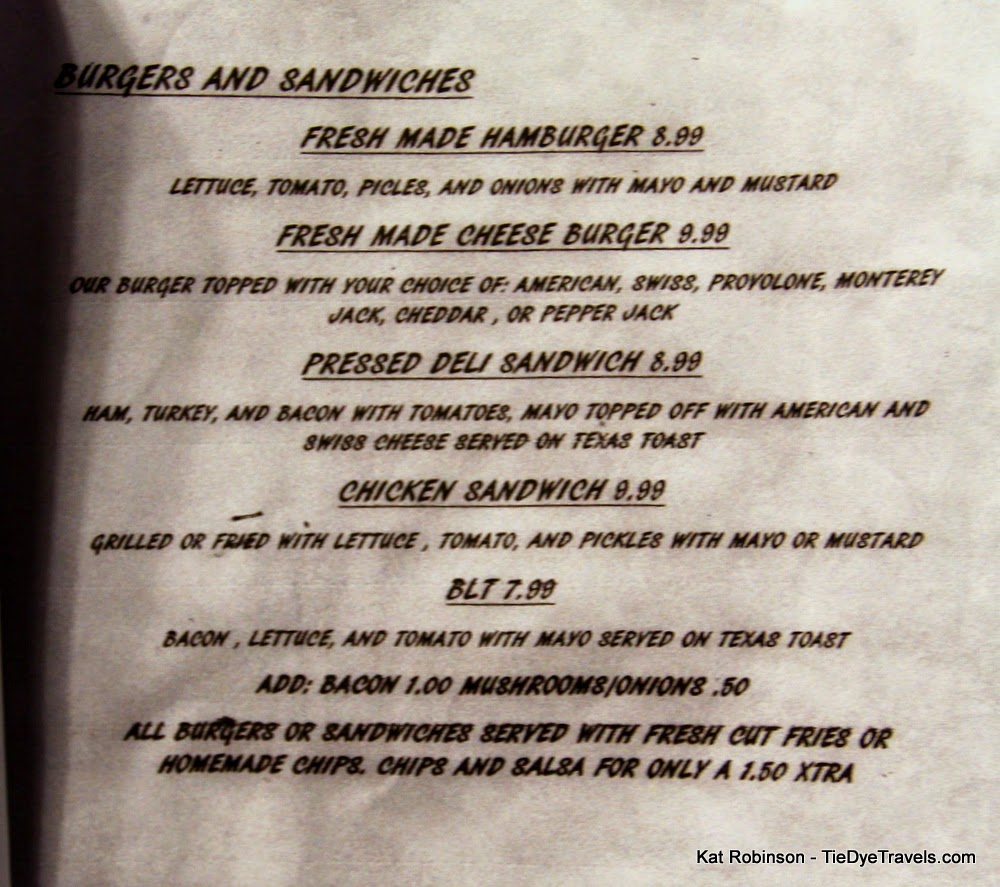 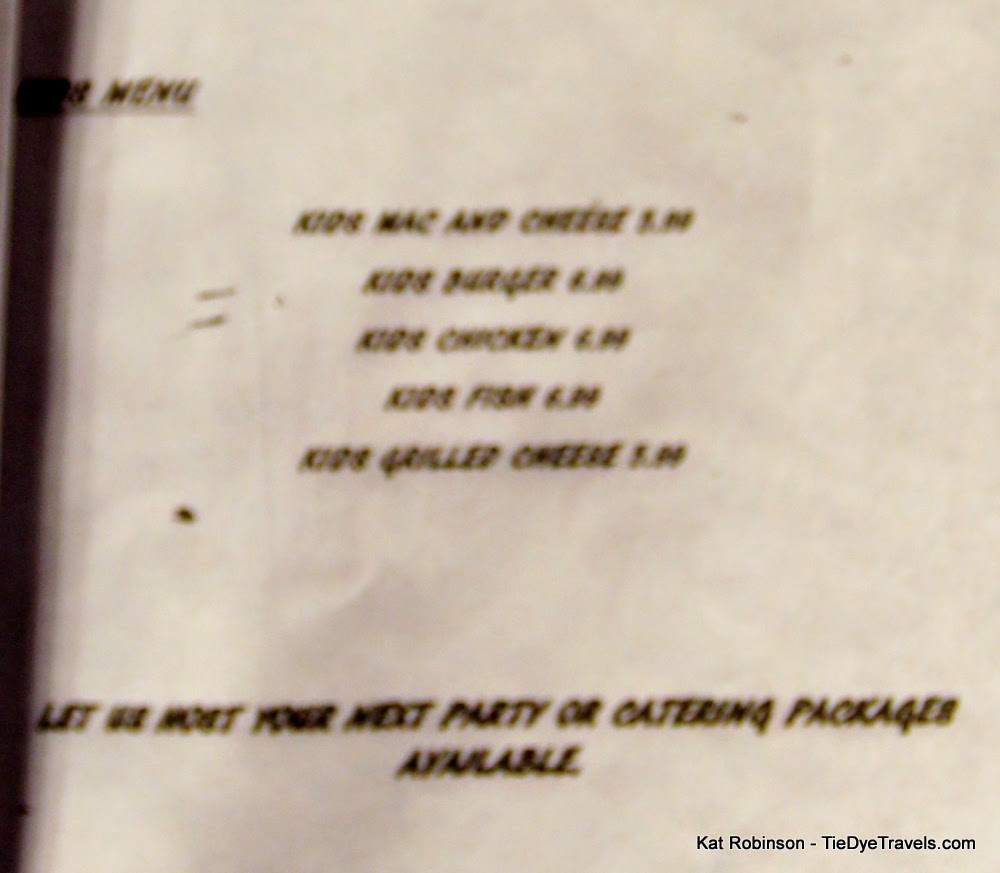 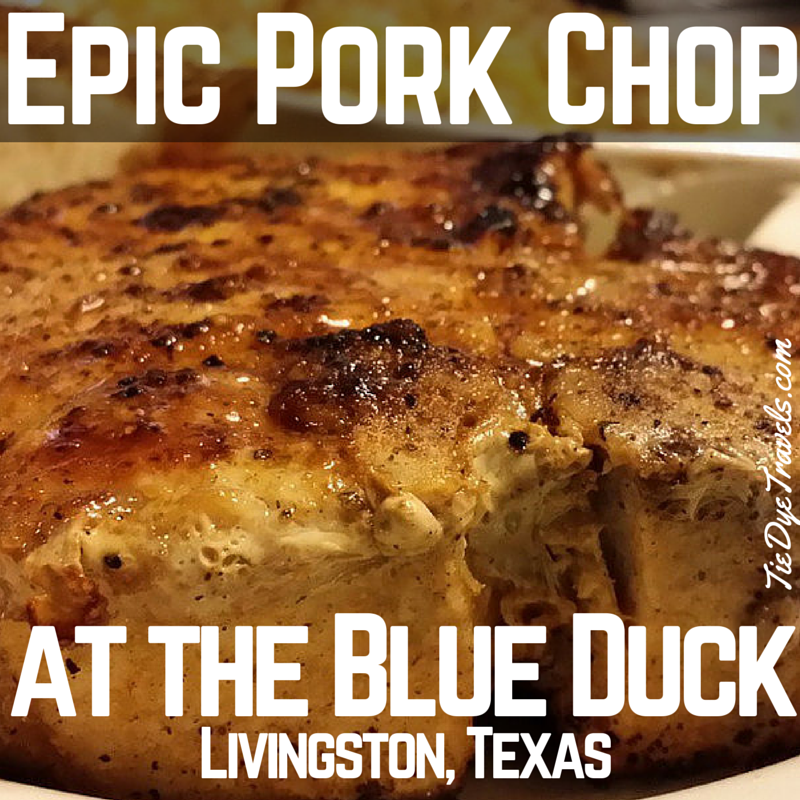 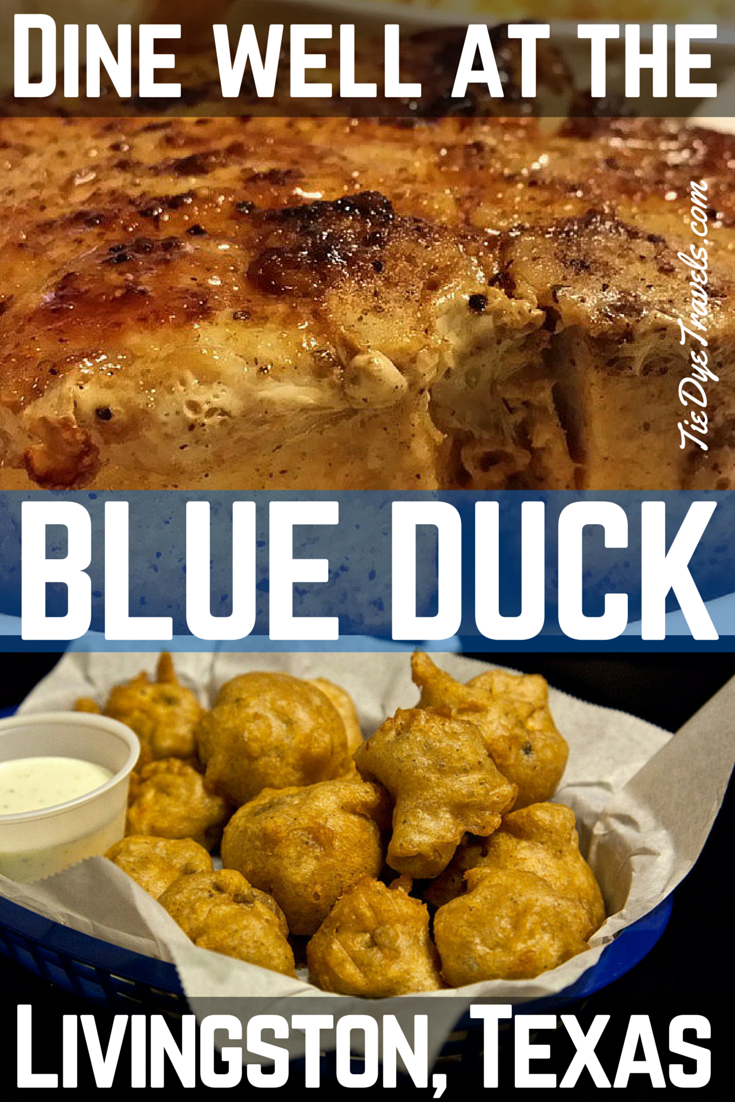